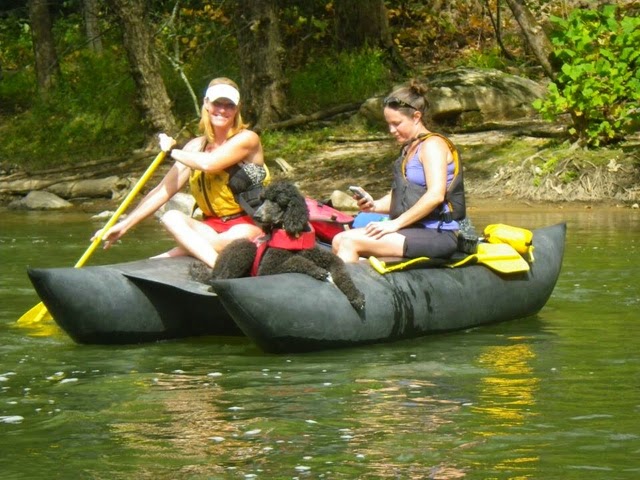 I think it is wonderful that DBP is supporting and promoting a Women of Whitewater Wednesday.   As a paddler- who happens to be female- I am always encouraged to see the women in this industry form movements that would highlight their performances and contributions to the sport.
When I began this journey in 1993 I arrived at the Carolina Wilderness Adventures outpost in Hot Springs not quite sure what to expect.  There were 5 female guides and 400 male guides (ok, slightly fuzzy numbers- so let’s go with 400, give or take 10).  There were 30 new trainees, of which 10 were girls so the potential of a shift in ratio of men to women was promising.  There were 3 females who got released at the end of training; I was not one of them.  Needless to say to those seasoned veterans out there- the ratio did not shift, beards and BO returned and by end of season only one of those 3 committed to next year’s roster.
It was a huge personal blow that I was politely encouraged to attend guide training again the following Spring.  For someone who engaged in every outdoor experience I could find, reading water and driving a boat fascinated a side of my spirit that had not been previously awakened by skiing, backpacking, climbing or biking. I wanted to know how to do this, not because it paid the bills through summer but because it was FUN, exciting and dangerous!  I returned the following year, put in my time and was released- the gentle guidance of my favorite Guru Andy Biggert, a boat load of “bless her heart” from the River Ops Manager and a smidgen of luck put me in the driver’s seat, finally! I was hence forth referred to as the “ever-greenie”, a label I now embrace gratefully.
In this humble beginning I truly believed that when I could efficiently drive a boat, entertain the guests and accurately count out life jackets (plus one) to be loaded on to the bus I would be a full-fledged member of the tribe.  There is an air of ‘fairy tale’ in that last statement; if you didn’t hear it, well, I have a cash bet in place saying I can guess your gender.
In the early 90’s there were so few women in the industry that there was no market for female focused apparel and equipment nor clubs for camaraderie.   We were relegated to the same black, teal, purple and blue (colors that dominated the scene during that decade) for shoes, shorts , splash gear, life jackets etc… that could be purchased in men’s sizes from the men’s department of the local retailer.  We were the minority of guides scheduled on the Upper Gauley, Ocoee or any other river that demanded “strength”. Now, two decades later, there is a female specific movement in every manufactured sector of the industry and a greater and growing number of female guides on the rivers I just mentioned.  Due to my unique perspective, based solely on the longevity of my involvement in paddle sports, I have a sense of superficial pride in the simple justice of these facts.  We’ve come a long way, baby.
It’s been an unusual journey to say the least, navigating my way through a male dominated industry.  I have along the way acquired an entire dialect used for communicating in the parking lot (and it would make even the most seasoned pirate blush).  I have earned a real respect for those brave enough to manage our tribe (aka river ops and non-owner GM’s) and I have doled out more advise to the new girls who show up in the parking lot every year with their sites set on being taken seriously on the water (buy a chastity belt sister).  And what I have learned is- genders are a mute point when you seek the bottom line.
The river is the great equalizer.  We are but monkeys on her waters, seeking tools to accomplish our  task more efficiently; and in the same breath artists, painting lavish colors in a myriad of brush strokes on the canvas of our souls.  Differences like Gender, physical stature and endurance, sobriety or lack there of, are but seasons in the bigger picture.  When I started out my attitude was “I can do everything you can do;” this season gave way to “I don’t have health insurance, I’m gonna sneak that, but I could still do it if I wanted to”.  After my children were born I just wanted to be good enough to keep my 4 year olds dry and entertained.  Now they are teenagers in their own boats, I have insurance and I have enough experience to rescue myself- this is the season of soul.
The season of soul is GOOD- so get here- when you can.   I am not a “girl”, although I applaud their accomplishments and encourage their success.  I am not “old”, experience has given way to more youth than I could have imagined 10 years ago.  It is this season in my journey where I can still remember being treated differently because I was a female but grateful I did not allow it to separate or insult me.  I can remember boating in men’s shorts and sporting a PFD that rubbed the soft skin on my side boob RAW but these memories just make my Wonder Vest and polypro skirt that much sweeter.
Gender and genetics offer some variances with regard to navigational approach, cognitive learning & knowledge retention and of course emotional engagement, however, WE chose to either validate and separate based on these baselines OR we chose to celebrate and include based on the common truth the river provides us all.  The time I have invested in this sport, the challenges it has presented-spiritually and physically- have brought more balance and acceptance to my world.
Merriam-Webster defines Tribe as a group of persons having a common character, occupation, or interest.  We are more than brothers and sisters- we are Tribe! 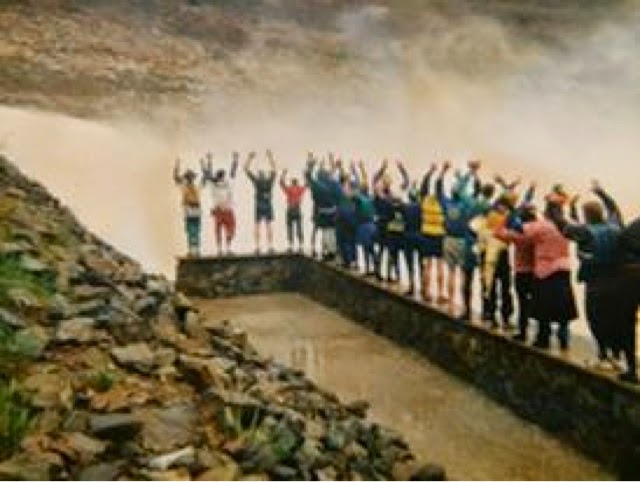 The tribe that learned me up was CWA- we did an annual 2 day on the Upper Gauley in costumes, with Glen Goodrich leading us all in a ‘praise Earl’ homage to the dam before we launched(circa 1996). 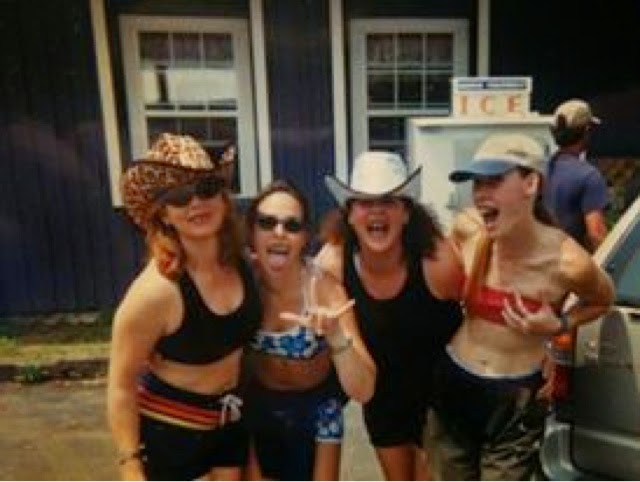 The first year we won the French Broad River Race. I paddled with an all girl crew only, every year but the last. You had to have at least 1 girl in your boat to be considered a winning team (nothing about a boy though…yeah, we were the handicap). 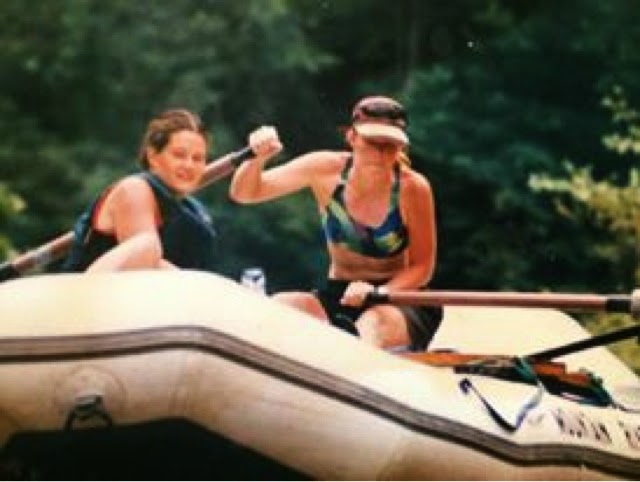 My first year rowing – forgot the life jacket that day, my mother would KILL me if she saw this- 1995, the year I decided I wanted a shredder. 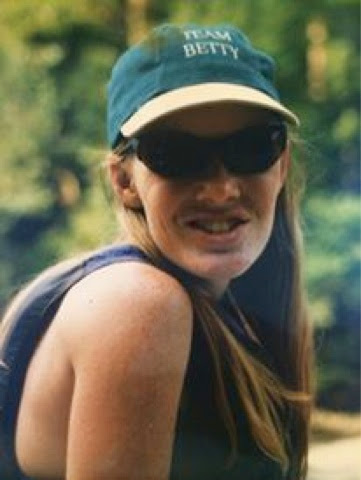 Team Betty hat- the girls club we started when a punk in the parking lot said we should all pose in our bikinis for a calendar- we spent that whole summer snapping pics of each other in what ever gnar we could find…Peyton Donatelli has the evidence! We even had stickers made & tagged every parking lot in the south east.
I started hard and strong, ‘PROUD’ of being a girl in whitewater!!! It’s softened quite a bit in the last decade and a half…. 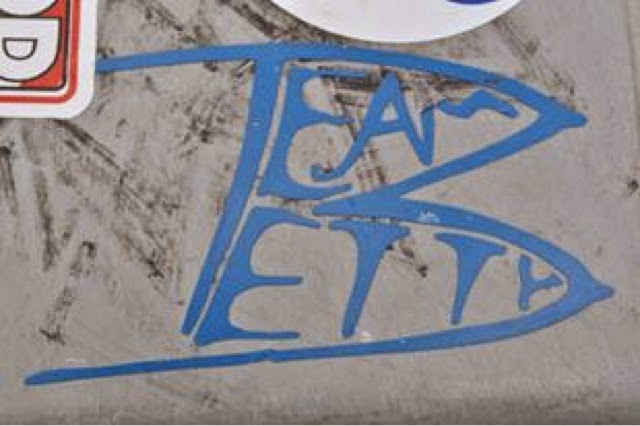 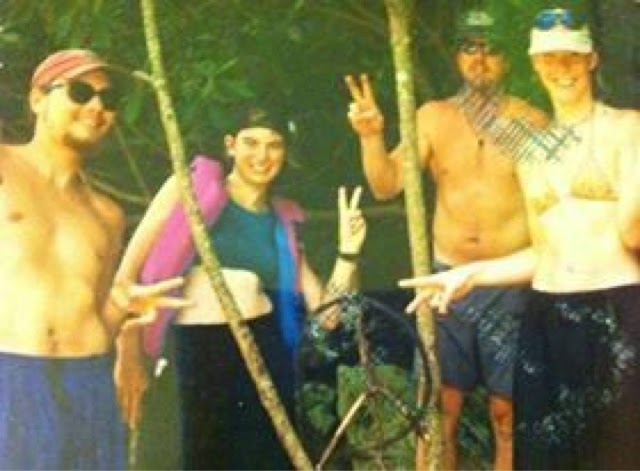 Our stickers….and me the first year I was a guide (Justyn Thompson, brand Manager for Watershed Drybags on the far left, Corey, then Brian and Me…Corey and I both still guide- this pic circa 1994.) 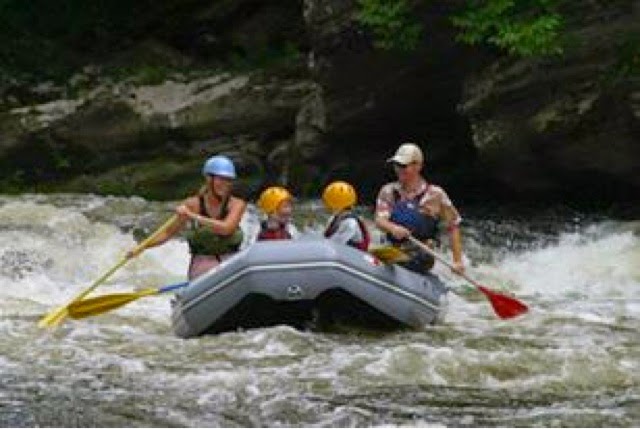 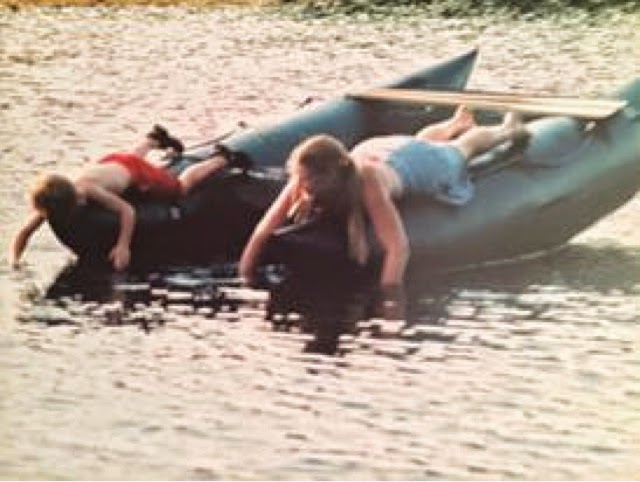 My boys- (sigh) they have brought a new and beautiful perspective. Vito and I in the Shredder; Sprocket and I taking them down the Pigeon for the first time; their faces after double reactionary…LOL, I can still hear the giggles now… 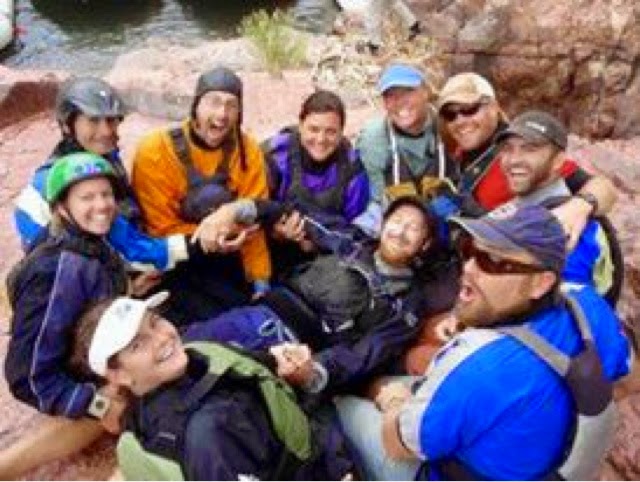 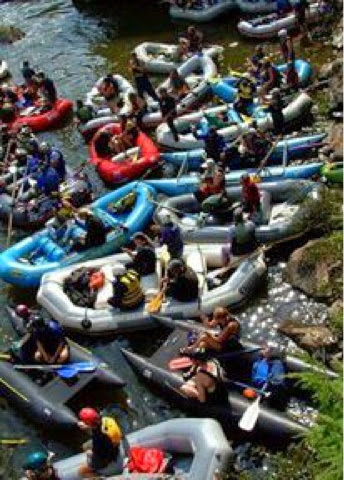 Soul boating is better with folks in the same season… my Grand Canyon permit year 2009 and Gauley season about 6 years ago, photo taken from atop the ‘batcave’ river right of scales…not sure what everyone else calls it.
Whitewater has been  a classroom like no other…a place we, as a family, find our own niche. Without the outlet of liquid refuge I honestly believe we’d all have succumbed to insanity.
{editors’ note: Biz is a DBP Admin for the Facebook page who we feature tonight in our weekly nod to great female paddlers: WOMEN OF WHITEWATER WEDNESDAY. She has contributed a humorous piece to this Magazine, PUMPKIN EATER from 11/28/14. She is a TRUE DBQueen in every sense of the word, and we’re honored to share the river with her. She resides in the Southeast.} 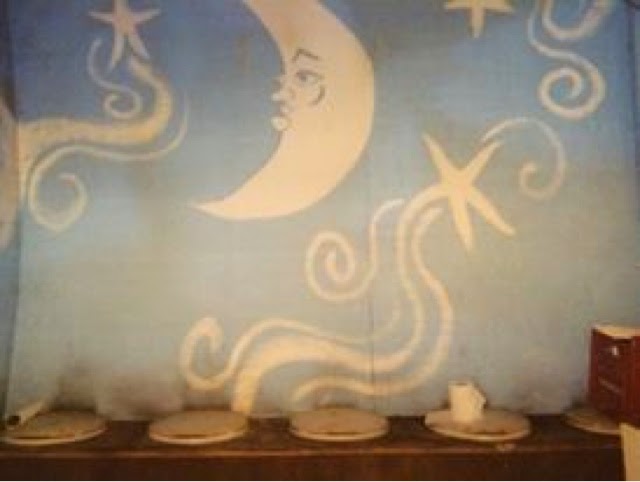 Thank you, Biz! Nice write up.

Oh..dang Biz..you made me cry. Happy Tears..:) so many good, good times in so many ways. Running rivers is the best medicine for the soul! CWA changed my life forever. How could anything be the same after..lol. You captured the essence well. Thanks for sharing and hope to see you on the water soon!