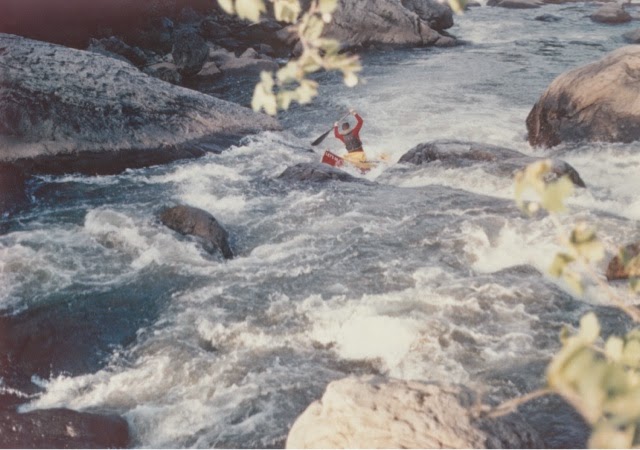 “An expert run! At the start the creek was shallow and slow. Soon it picked up until for 4-5 miles it dropped 100 feet per mile. Through huge boulder patches water funneled between rocks and tumbled in below…
…Probably the last time it will be run.”
-Dave Kurtz, journal entry, May 31st, 1959
On May 31st, 1959, Bill Bickham, Dave Kurtz, and Tom Smyth completed the first descent of the Upper Youghiogheny River in Maryland.
They likely weren’t the first ones to journey down the gorge. That honor probably belongs to teenagers, on makeshift rafts, with too much time on their hands. Their boats were much longer than we use today and the gear much simpler. Tom Smyth managed to get a seventeen foot Grumman down the run, while Bill and Dave ran in fifteen footers. Rubber knee pads and wooden rods passed as outfitting. And helmets, as Dave recalls, “those were unheard of in those days.”
But Bill, Dave, and Tom were the first to complete the run using a style we’d recognize today as whitewater paddling. As members of the Penn State Outing Club they had honed their skills on the streams of central PA. And now, with the semester over, they found themselves in the Youghiogheny Valley with a little too much time on their hands. 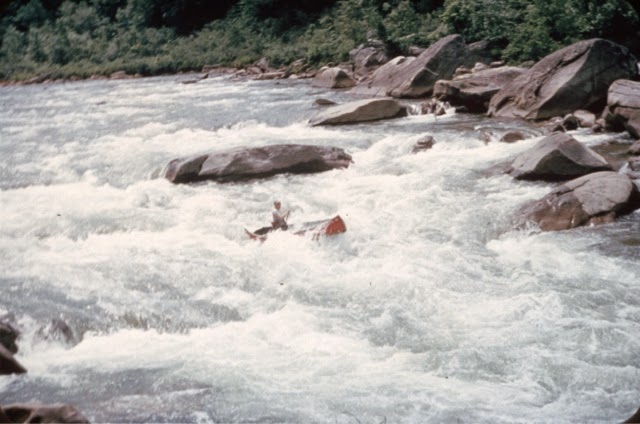 Bill Bickham Cucumber Rapid 1959
They began on the Lower Yough in the tiny town of Ohiopyle. Town residents warned them that the river was treacherous, and that they weren’t likely to make it out alive. But they knew from guidebooks that this stretch had been run before. They set shuttle in Connellsville and began their journey downriver. Tom later described the group’s encounter with Cucumber rapid:
“The river dropped much faster and swept past a large midstream boulder to become a seething white mass in a deep basin. I took it near the middle and arrived with a dry mount and a lot of extra ballast at an eddy below.”
American Whitewater Journal, May 1961
Having completed the Lower Yough, the crew headed south to Friendsville. At that point, they knew the Upper Yough as two things. Tom Smyth had found it while scouring topographic maps for potential new runs. And Walter Burmeister’s Appalachian White Water called the run a class VI, much like it ranked the Lower Yough. But mostly, it was that narrow strip of blue between steep green shores. They had no idea what would await them.
What they found was an endless series of rocks.  With no water releasing from the dam, the river was well below the standard release levels of today. They scraped their way through the shallow gravel beds before finally arriving at Gap Falls. Then, Tom Smyth said, “the real nonsense began.”
FIRST DECENT OF THE UPPER YOUGH
https://vimeo.com/96499908
It took a decade for boaters to tame the Upper Yough.
In the 1960’s, kayaking was organized around slalom racing; it was the lens through which everyone viewed the sport. The best would train daily on gates, trying to shave crucial seconds off their race times. That training left little time to acquire the skills to run harder rivers, let alone find new techniques and build new boats. So when boaters of that era found themselves on the Upper Yough, they were tiptoeing their way around the edges, doing their best to avoid the carnage that marked so many early trips. 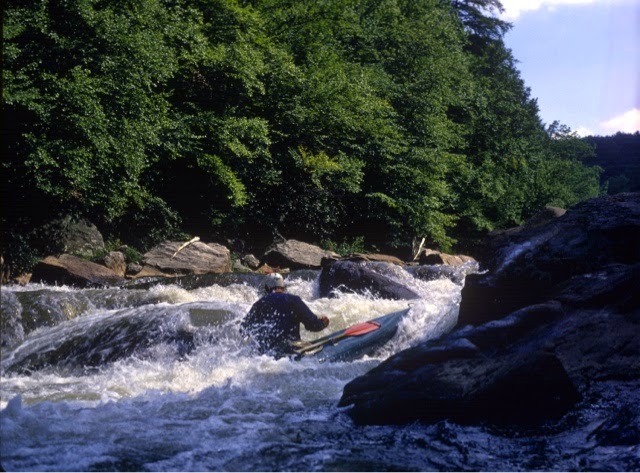 John Sweet at National
Bill Bickham had lost his boat on the first descent, and at least one boater per group would meet the same fate on the next few runs. The problem was mostly the equipment; the knowledge to build better boats was obtained from Europe, and it was a slow trickle of information until American racers started traveling over there. Even then, all of your gear was home made. Your survival depended on your, or your paddling buddies’, craftsmanship.
“The sport’s safety ethic was omnipresent and weighed heavily. It was not considered heroic to take on river risks; it was simply unacceptable…Do you seek the mountain high, or just another way to die?”
-Jim Stuart
It wasn’t until later in the 1960’s that boaters started pushing for new descents down harder rivers. John Sweet, Jackson Wright, Jim Stuart and a host of boaters led a charge to open up new rivers. By the 1969, classic rivers like the Savage, Big Sandy, and Gauley had all been added to the list of options. But even then, steep technical creeks like the Upper Yough remained among the most difficult things they would run. The learning curve was steep, and many boats, and boaters, left the river with the marks to prove it.
THE LEARNING CURVE
https://vimeo.com/101053191
Of course, equipment and skills weren’t the only thing keeping boaters off of the Upper Yough. The river itself was in the middle of nowhere. According to Bill Kirby, before the highway was built to Friendsville, the drive from DC took about four and a half hours. You had to travel down winding gravel roads, often poorly marked, to find your way to the bridge at Sang Run. So the Upper Yough was largely a local phenomenon; paddled by the raft guides in Ohiopyle and the small collection of clubs that made occasional trips. 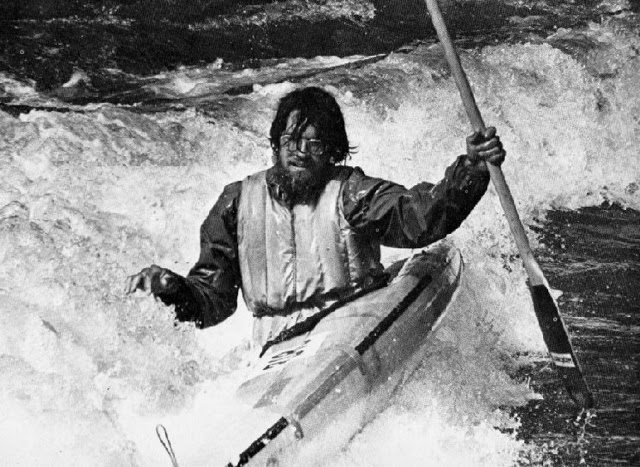 Snyder at Swimmers
When Wildwater West Virginia was released, it opened the floodgates to outside boaters.
Weekly trips would find boaters coming from across the country to be led down the river by Dan Demaree, Dave Demaree, and Jim Snyder. In just a few short years, the “scary” river of the 1960’s became a playground for boaters. Colorful rapid names like Bastard Falls, Charlie’s Choice, Tommy’s Hole, and Lost and Found marked the rapid evolution, and occasional misstep, of the boaters pushing the sport forward.
And as boaters got better, they began to branch away from racing. From a collection of high school and college-aged kids, bored in the middle of the week, surrounded by an endless supply of great rivers, a new facet of the sport emerged. The challenge was no longer weaving between gates, searching for the cleanest line and fastest time. Feet per mile became the new marker in a search for steeper rivers, and creek boating was born.
THE GUIDES
https://vimeo.com/113554513
In the background of boating’s progress was a mostly unspoken truth; the rivers were a mess. Acid mine drainage, logging, and poor sanitation meant that most rivers left a bad taste in your mouth. The North Branch of the Potomac and Cheat were dead rivers, and the Casselman and Lower Yough were barely supporting life. Even the Upper Yough had problems with sewage from Oakland, and abandoned mines in the West Virginia headwaters. But compared to many of the surrounding rivers, it was clean, a gem worth singling out and saving. 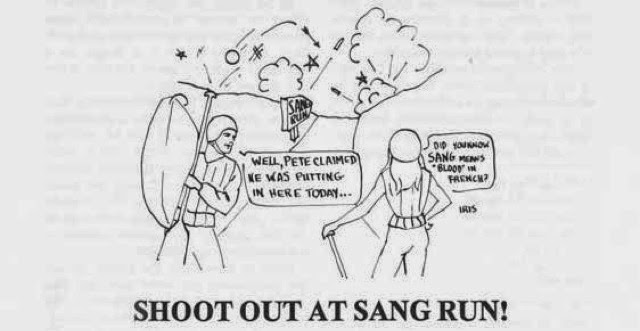 But saving a river is not an easy task. Starting in the late 1960’s, a series of attempts to protect the river failed. The Yough was studied as a national Wild and Scenic river, but was left off the final bill. State laws barring strip mining and logging were thrown out in court. By the middle of the 1970’s, Garrett County was experiencing a coal boom, and the Youghiogheny corridor was their next target. 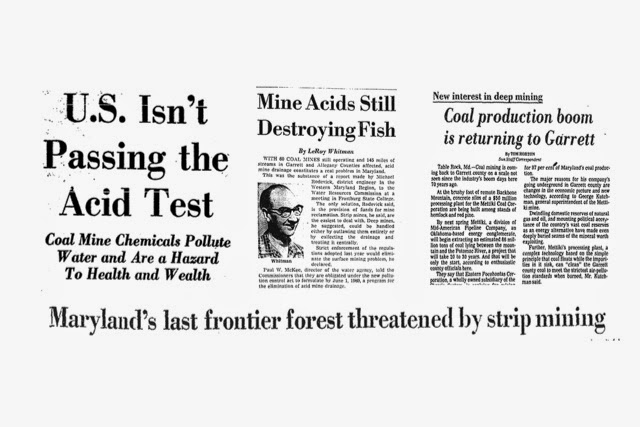 In 1976, the Maryland DNR declared the Yough a “wild” river from Miller’s Crossing through Friendsville. The designation meant that land could not be sub-divided, that no new roads or buildings could be built within the corridor, and that anything within sight of the river had the match the natural aesthetic. 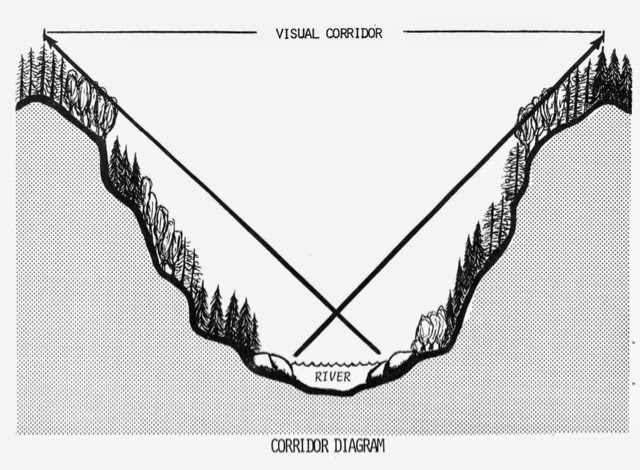 The residents of Garrett County, already not particularly fond of the politicians in Annapolis, were furious. They were angry that a state agency seemed to be taking over their land, land they saw profit in from coal and timber companies, and they weren’t being compensated for the change. The word “communist” became commonplace among the residents, and they organized a network of communication to keep out-of-towners from enjoying the area. For boaters, this meant angry, and often armed, confrontations at the bridge in Sang Run.
SHOOTOUT AT SANG RUN
https://vimeo.com/118832093
By 1982, things had calmed down. The main agitators had moved on or passed away, and Precision Rafting was paying for access to the river. Imre Szilagyi bought the land that is now the official put-in and allowed private boaters access.
Twenty-five years after the first descent, after numerous broken boats, bloodied faces, and angry confrontations, the Upper Yough was starting to resemble the experience we know today. The Upper Yough Race started in 1981, and continues at the end of July every year. Dam relicensing in 1995 and 1996 added weekend releases, and a renewal in 2007 resulted in the summer schedule we are familiar with today. A half-century after three boaters banged their way down the river in Grumman canoes, hundreds of boaters get to enjoy the river they thought nobody would ever run again.