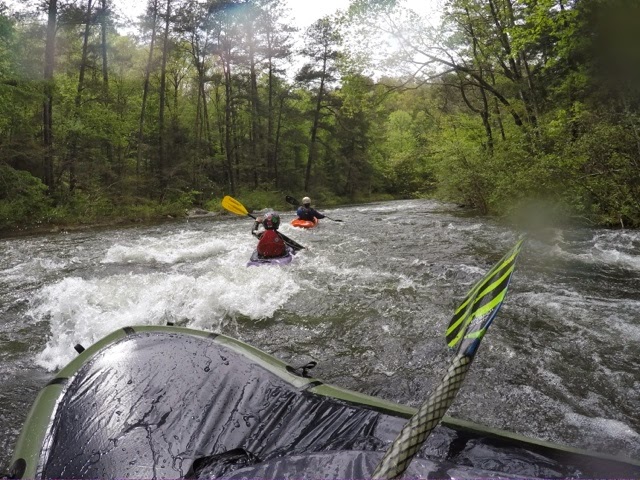 Part 2
I try to get an early start because I am always late and forgetting things so the earlier I get going the less chance there is for distractions. Well, this morning we are to meet in Ocoee, TN at 10 am. Less than 2 hours away and I still can’t seem to get there on time! Once again barreling into the parking lot at 26 minutes after 10, I get a look of slight confusion from some. I expected this as I had no boat on top or inside of my truck, from what they could tell. See, when I made it home the night before I found a package containing a new product for me to test, a Pack raft made by Alpacka rafts. It’s the Denali Lama model and I have been waiting patiently for months to try it. I will have more about this little boat in another story. Okay, so I might hint a little, throughout this, as to its performance and handling, but I will try and keep it to a minimum.
While the dust was still drifting in the air I stepped out and made my way toward the group I would be paddling with for the day.  A few had made the trip with me the day prior. I think they had the same idea I had, why pass up a chance to paddle with a master paddler (Kirk Eddlemon) even if it is a class 2+ run? It would be in a part of the backcountry that doesn’t get enough water to have any regular flow, but this weekend it was ripe for a sightseeing paddle. Leaving a vehicle at the take out, a stout 20 minute hike up from the river on a well worn trail, we continued to the put in. 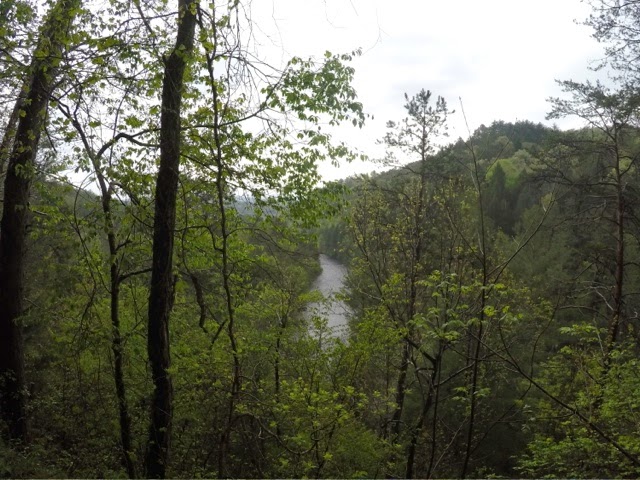 This would be the first time paddling an Alpacka for me, and I was excited to see what it could do. It was easy to inflate with the bag pump and top off valve but after a few minutes in the cold water it did suffer a little shrinkage so I stopped to top it off again. These little crafts are very sensitive to any loss of air pressure and need to be kept nice and taut. This also means keeping a close eye on them during stops. I found it best to let a bit of air out during longer brakes to prevent expansion in the warm sun. With my boat and my group ready we began our serendipitous voyage down the Conasauga. 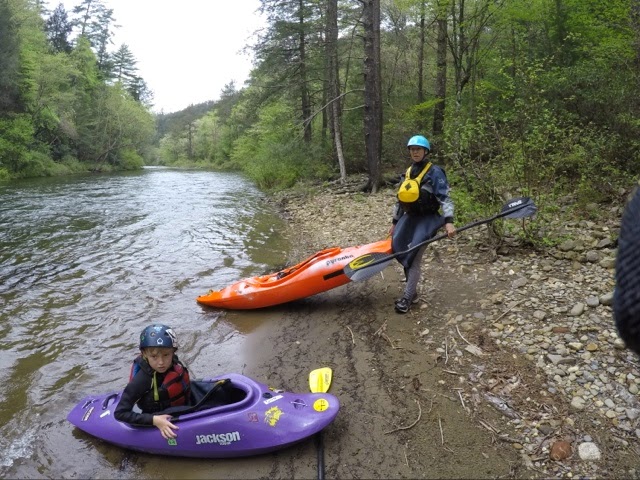 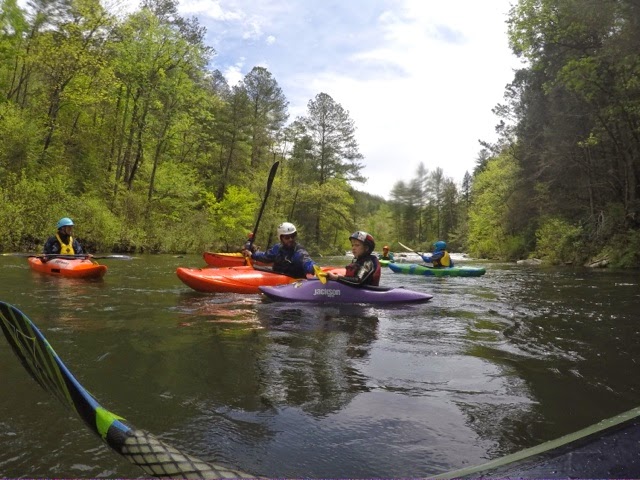 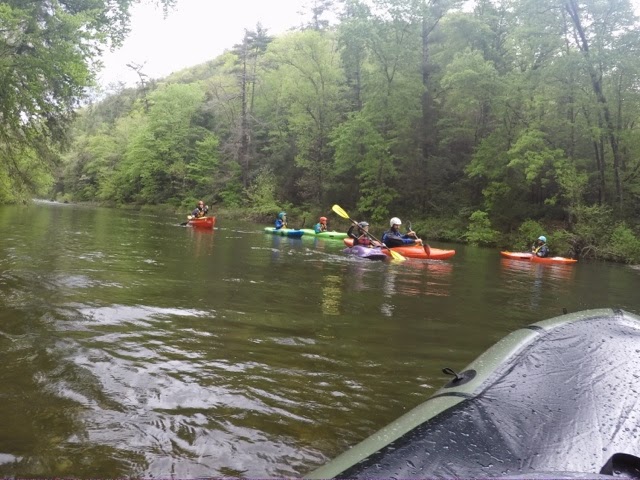 Upon entering the water I noticed that Kirk’s son Alex was not in a tandem, but his own boat! At all of 8 years old I thought this to be very cool. What a way to connect with the family. Mom, dad and son all paddling together on the river- proving, once again, that you don’t have to stop living just because you have children. The best way to have well balanced caring humans is to train them in the fine art of enjoying and respecting the world around them. Kirk along with his wife Laura are doing a fine job indeed. I witnessed this several times when paddling this day. Alex would come to a rapid and discuss the line while Kirk listened and let him choose his route. It was cool to watch him as he would pick a line and get after it. What a great teaching tool kayaking is for kids. It shows them that they must rely on their own abilities to make split second decisions and deal with the rewards or consequences of their choices. While building this independent character it simultaneously teaches the importance of team work. You never know when your buddies may need help and you always need to be looking out for them. The life lessons that translate from kayaking are limitless. 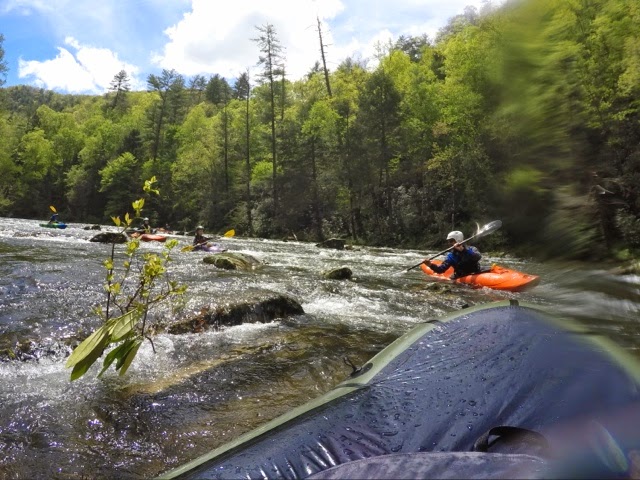 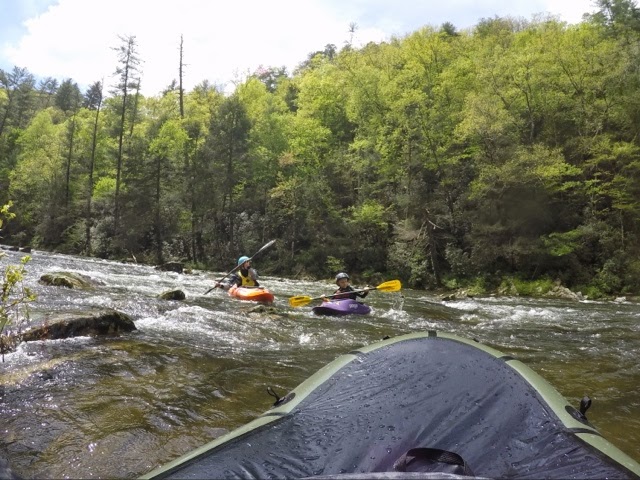 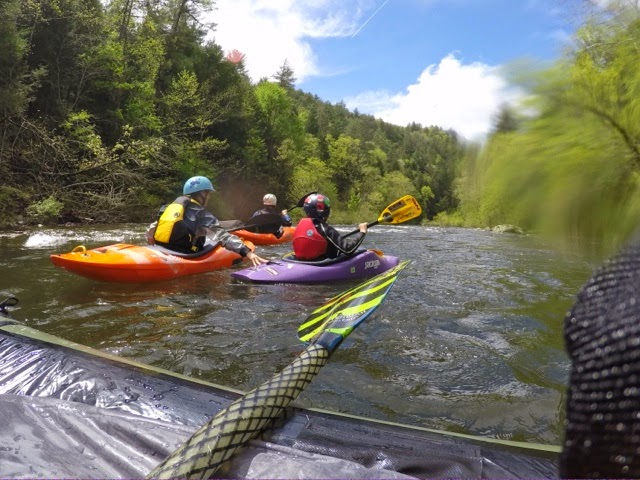 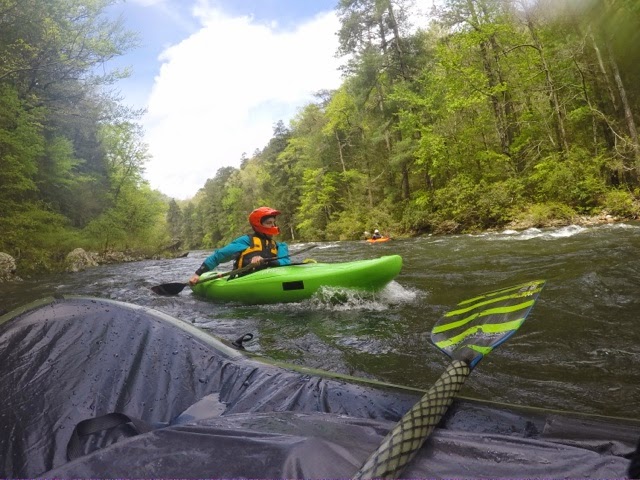 The day was going well. I was enjoying the feel of the Alpacka. It responds and maneuvers way better than I thought it could. Catching eddies and ferrying was not a problem for this nimble little inflatable. 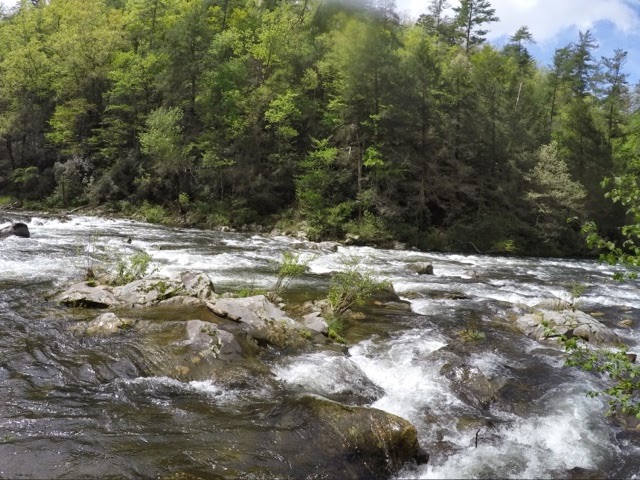 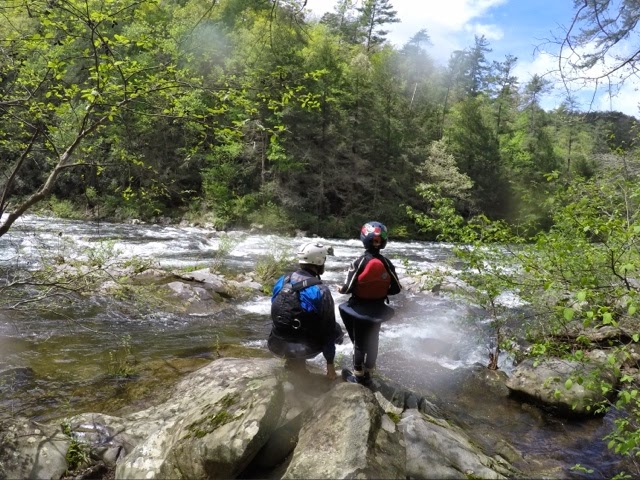 We came to a particularly large class 3. It was not too crazy but for the eyes of an 8 year old it would be a monster. We stopped to admire and scout the spot. I followed Kirk and Alex to the middle section of the rapid for a better look. When I broke out of the trees I could see the beautiful class 3 drop in front of me. It wasn’t anything I thought twice about but there on the shore in front of me was a moment taking place that I remember many times as my son was growing up. A father bent down talking life lessons to his son, explaining options and choices. Then I heard a comment from young Alex, “I feel like a jerk”.  I bent down beside the two and asked Alex why he felt this way. He explained that he wasn’t ready to run this rapid and was going to walk it. I smiled and told him that there was nothing wrong with walking a rapid and that many people have and always will walk something until they feel right. I know Kirk had been saying similar things to him but I also know, having raised a human, sometimes if it comes from anyone other than your parents it makes sense. He started to smile. I went on about how only a few weeks earlier I was talking kayaking with this guy and he was telling me a story about a waterfall that he and his friend wanted to run so bad. They looked at it for a few days. Walked up and down it and when they felt right they ran it. I told him that he may have heard of the guys, “you ever hear of Ben Marr or Steve Fisher?” I asked. He smiled and said “Yeah.” “That was them, they walk stuff too. They look and learn and study. They run a ton of crazy stuff but they do it smart.” I think this made him feel a little better. Then I reminded him that this rapid isn’t going anywhere and it will be here for him to run another day. With that the three of us headed back to the top of the rapid. Alex insisted on walking his own boat and he did. “NO SHAME!” I shouted as he and his dad disappeared into the trees. I ran the rapid a few times due to the easy trail and it was a fun loop. 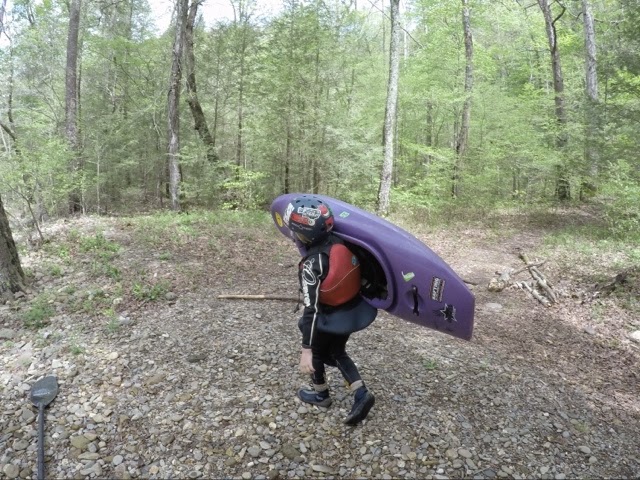 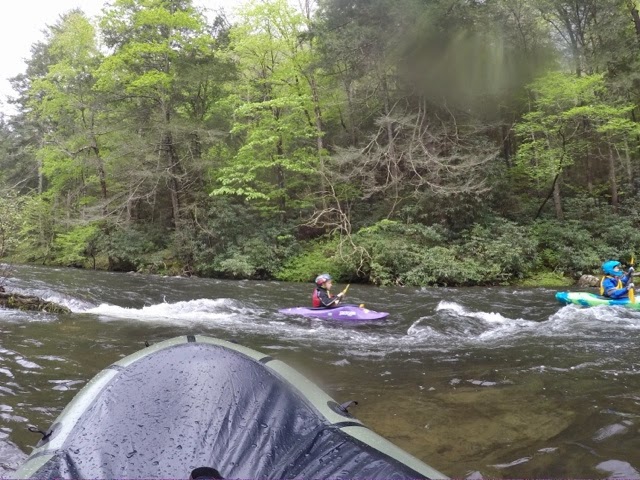 When we had all made it through we gathered up again and headed down river. The Conasauga is a classic southeast canyon with sandy beaches and steep cliffs often not far from each other. As we floated downstream, conversation led to the dangers of such areas. Steep canyons like this can have many hazards. We talked about the importance of safety and looking out for the group, at the same time paying attention to what the river is doing. The words “you never know when a tree could be laying across the river” had just come out of the mouth of Kirk as we approached a bend in the river and wouldn’t you know it! Like on cue, a big tree lying right across the river! “Ask and you shall receive,” I said as we crept closer to the downed lumber. With just enough room to slip under, one by one we made our way past the obstacle. Aaron in his canoe didn’t have an easy go of it, but with some persistence he made it under. 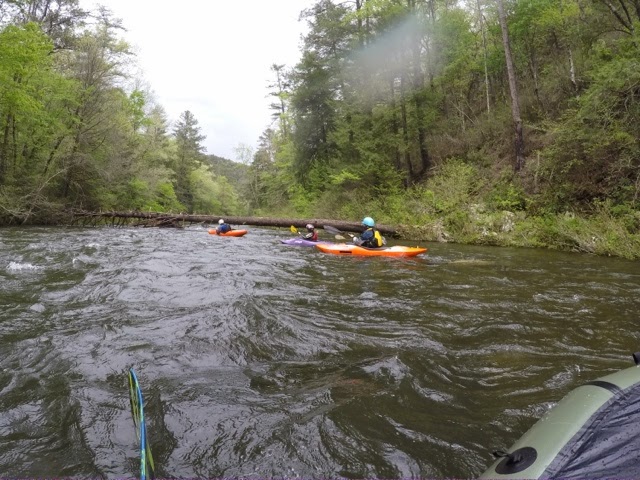 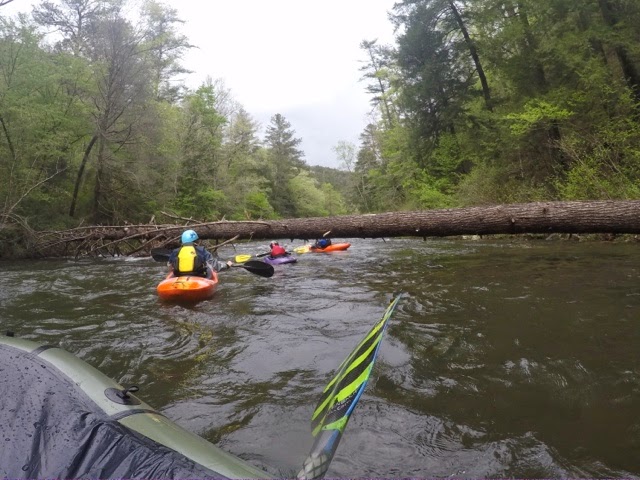 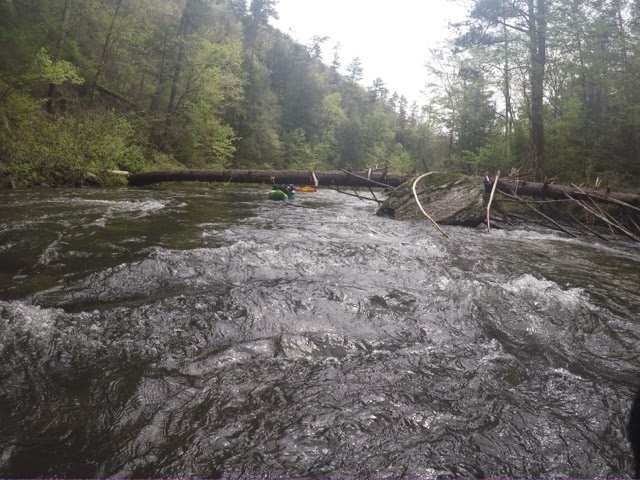 At our lunch break a few of us tested our paddling skills out on Aaron’s canoe. Kirk jumped in first and had done well ferrying and almost surfing then Laura hoped in and tried to attain the surf spot but quickly found herself floating down stream, somewhat in control. Alex ran down to help retrieve his mother and bring the boat back upstream. I figured since I had yet to try an open boat I would give it a whirl. I managed to keep it upright but that was about it. I have a whole new respect for those things, as well as questions. It is an awkward craft to paddle. 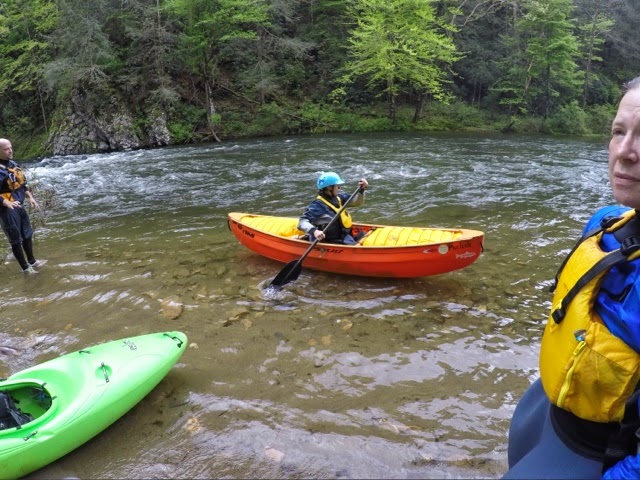 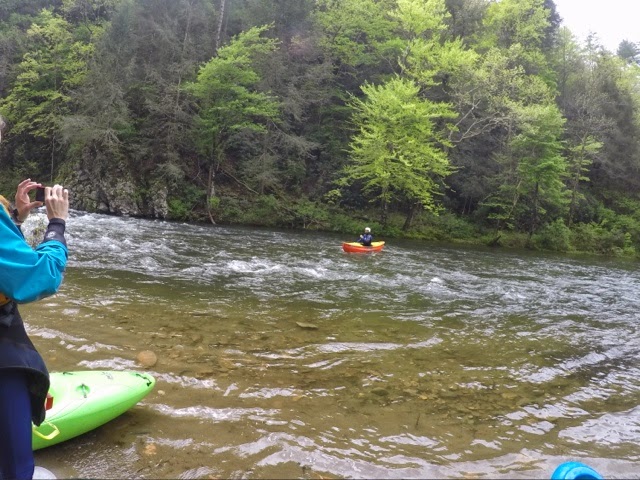 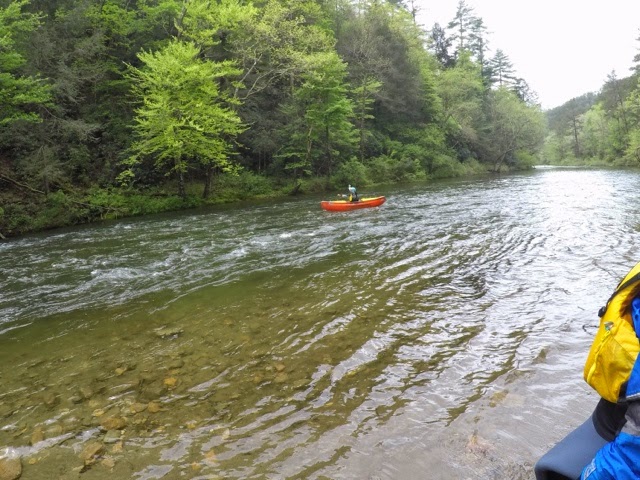 With lunch and playtime over we pushed off towards the take out. Alex amazed me at his comfort and maturity on the water. I only wish I had been kayaking when my son was younger. It is family activities like this that build a solid foundation for a person and a family. I strongly encourage parents to do as much outdoors activities with their kids as they can. If you don’t feel comfortable with your own capabilities than find someone to teach you and help build your confidence.  Your child will see that you are not perfect and there are things you don’t know either. Another great skill to have as a parent, the ability to let you kids know that you don’t know. Tell them “I don’t know”. Let them see you struggle to learn something. Let them see you asking questions and making mistakes. Show them that you are equals and your only advantage is that you have been around a little longer.  We expect them to do as we say but they learn from what we do.
The day was long and beautiful, filled with good people and fun water. Wallace didn’t make an appearance on this trip and I was glad not to see him. I was pleased to make it out to this little, rarely run river with such an inspiring group of people. Just because the water isn’t high and the consequences are low is no reason to miss out on some good times in a new place. So go grab some friends a take a relaxing float down that class 2 that you thought you were too good for. You might just learn a thing or two. 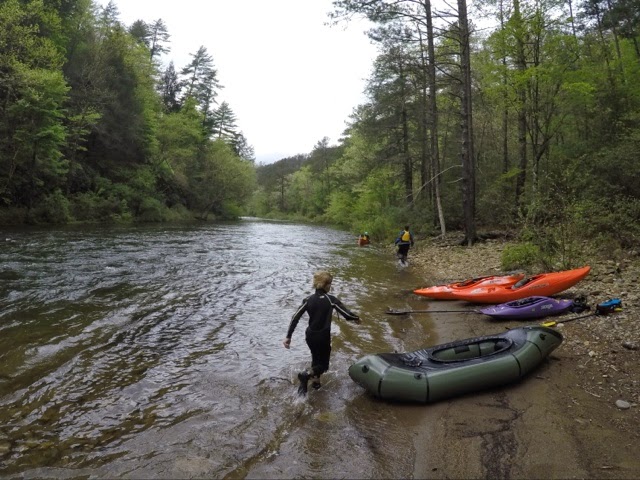 {EDITORS: Wes, who is a Co-Editor and regular contributor to this Magazine as well as a Dirt Bag Paddlers Facebook page Admin, is always down for a good time on the river! Go back and check out part one of his story here, from 4/23/15. Cheers!!}
Kirk Eddlemon’s two volume river guide for the Southeast.
http://www.wwsouthernapps.com/about/
Classic Kirk paddling!
https://vimeo.com/4247675