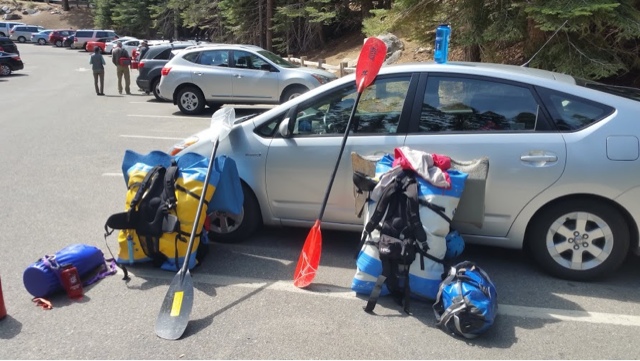 Merced: Part 1 – Prologue
This trip really started a couple months ago with a botched attempt at Upper Cherry.  I was highly skeptical that the classic run was going to be in the desired flow range but was on a train destined for a collision course with California.  I decided that instead of jumping ship I would look into other options in the area.  The obvious choice was a salvaging run on South Silver, despite lamentations to the contrary we ended up doing this run and really enjoying it.  I also noticed that there were a couple runs on the Merced flowing and further research showed that a couple new sections on this stream had just been legalized thanks to the work of American Whitewater.  I checked out the maps and was most intrigued by the headwaters run on the Merced, which had large/smooth slides that could be seen from the satellite imagery.  I did some basic reconnaissance on the internet but since it was only a backup plan didn’t delve too deep.
Ben Mckenzie, Kory Kellum, Priscilla Macy and myself headed out from the Willamette Valley at a leisurely pace certain that Upper Cherry was still high and we had a couple days to kill before we would even be thinking about hiking in.  As I mentioned earlier we took a pit stop at South Silver and had a great time.  Totally the epitome of class fun.  We portaged the mandatory as well as a manky double drop near the beginning, but other than that we slipped and slid our way down our first taste of Granite goodness.  I walked back up the creek to run shuttle while the others walked the boats past the last hundred yards of mank. 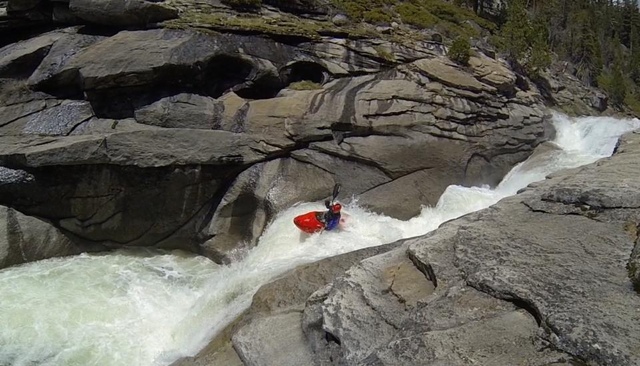 We were liking what California was offering.
We left South Silver in high spirits headed towards Groveland, where we met up with Willy Dinsdale. Despite high optimism from others who were going to start their hike that night, we were skeptical at best that Cherry would drop into a good range.  After pizza and beer with Willy (high water Cherry veteran) we decided that we would make the call in the morning. 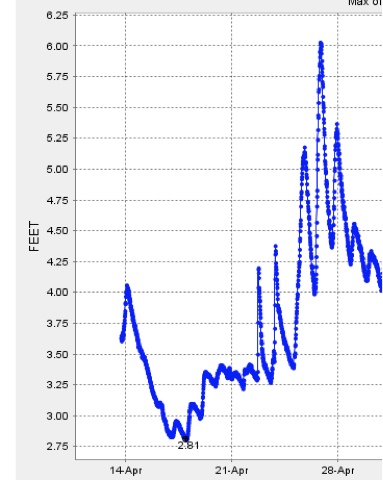 What we were working with, hearing that 3.4 was considered a good, padded flow and 4′ was high.
Morning came and the gauge had actually gone up a touch, we had no reservations about aborting and considered the alternatives.  Ben and Willy decided on low water Fantasy Falls while Priscilla, Kory and I decided to check out Yosemite since we had never been.  We parted ways and did a quick park and plop on the SF Tuolumne on the way over. 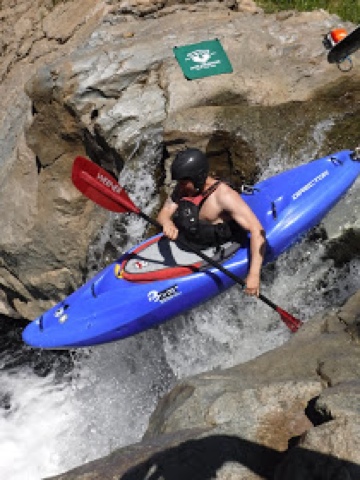 Kory having a good time.
On the way down we decided to check out Yosemite Valley but also were looking for an IK to haul up the Merced to run the headwater slides, given we only had a couple days and needed to move quick.  The plan was to then take turns running the slides and have a pretty leisurely time at it.  We went to the local guiding company, but the only IK they had was a friends who was not in town and understandably they chose to honor their duty of keeping it safe and did not loan it to us.  I decided I would just haul my hardshell up and we could take turns carrying the boat and overnight gear, then take turns running the slides.  We knew we needed a permit so went to the office where they informed us all the permits had been assigned for the day that allowed access to that area.  We were a bit bummed but while looking through a book in the office we saw a picture of one of the slides and we which fueled our fire to return.  It looked to be over 50′ tall and totally clean!  We got a permit to Ostrander Lake instead and had a nice evening hike up to the lake, doing the last hour or two at night under a full moon. 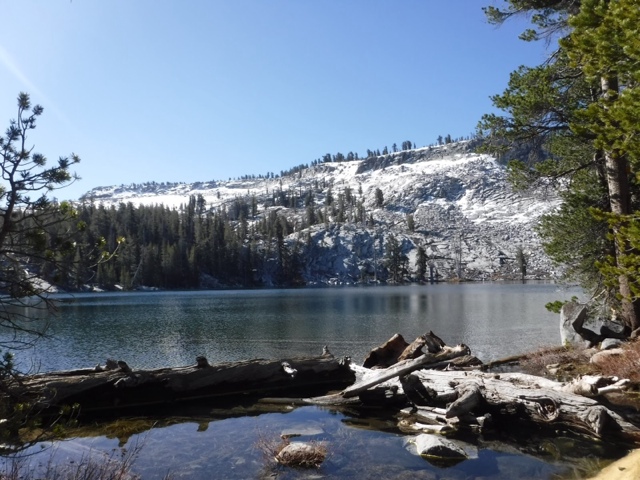 Ostrander Lake in the morning
We got up moderately early as we needed to do the 7 mile hike back to our vehicle quickly in order to run shuttle for Ben and Willy before driving back to Oregon.
We got into cell range and had a message from Ben; “Had to hike out of Fantasy, Willy dropped me off at a Starbucks.  No rush, lots to do here in Angel.”  Thats another story on its own, but the gist is it required another overnight backpacking trip to retrieve Ben’s borrowed boat and a long drive through the night to get a sick Kory back to work afterwords.
We were exhausted and I left California with mixed feelings.  However, a week later while at work back in Salem the Upper Merced popped back into my mind.  This time I did the fully required research, learned about the challenges of acquiring permits, the best hiking routes, compared pictures from hikers to historic water levels, found more than enough pictures of big granite slides to get me very excited and the trip planning began.
Beta will be up on American Whitewater before long, but for the sake of the story understand the logistics were difficult.  2 weeks of planning and we felt ready to give it a go.
Priscilla and I decided we would take inflatable kayaks (IKs) to reduce weight on the 14 mile hike in. The internet scouting led us to believe the best drops would go just fine in these craft and would make portaging in tight locations easier.  Levels looked good for a trip that weekend, but rain bumped up the levels out of our comfort zone a couple days before our planned departure.  We spent a nice weekend on the Klamath, hoping levels would drop down by the next weekend, it did not.   Sunday we checked the forecast and saw that levels were projected to drop throughout the week down to a reasonable level for a trip the following weekend.  Sunday evening we told our friend Ben about the trip, thinking he might be interested.  Half hour later he informed us that Steve Fisher and Pat Keller were already hiking in the next day to do the very run we had been planning for.  To be honest I was deflated, I had put a lot of work into the trip and wanted to be the first to do it.  However, they had also put a lot of work in and beat us to it.  That week at work was rough, but I still wanted to do the run and so did Priscilla.  We decided we would pull the trigger, taking some time off work for an extended weekend and give it a go for ourselves.  Forecasted thunderstorms for the weekend had us a little nervous, but as is often the case knowledge is power and after more research, phone calls and checking the forecast we felt comfortable we would be ok and possibly enjoy camping in the thunderstorm. With levels projected not to be affected by the weather, Priscilla picked me up from work mid-day Thursday and we set off on our adventure. 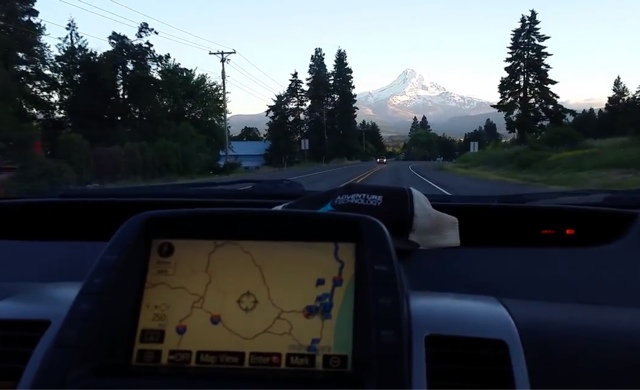 {Editor’s Note: Priscilla, one of the 100+ Admins on the Dirt Bag Paddlers Facebook page, hit me up with the opportunity to run this story – something I couldn’t refuse! Watch for part 2 of this epic tale next Friday night here at DBP MAGAZINE ONLINE.}

Footy of this epic trip by Priscilla Macy
https://vimeo.com/130754869
A link back to Jacob and friends’ blog:
http://mthoodh2o.blogspot.com