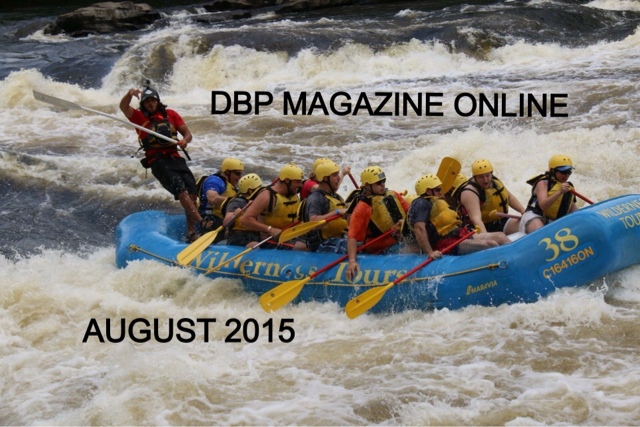 This month marks our second anniversary of the first post on the Dirtbag Paddlers Facebook page. Who would have thought that two years later we would be approaching 8,000 fans, 3,000 followers on Instagram, almost 60,000 reads here in DBP MAGAZINE ONLINE, and DBP decals Wallacing everything from boats to Dirtbagmobiles to buses and road signs all across the globe? Not us, when we started. We just wanted to entertain some friends…
Speaking of entertaining, this month in the Mag we’ve got some gnarly interviews, coverage from a few different festivals from across the DBWorld, and a very special Spotlight series on our close friend and original DBP Admin, Frank Sade. In fact, we are firing up the month with Frank Fest here in northern Wisconsin in his honor (Aug 1-2); watch for a report later in the month. 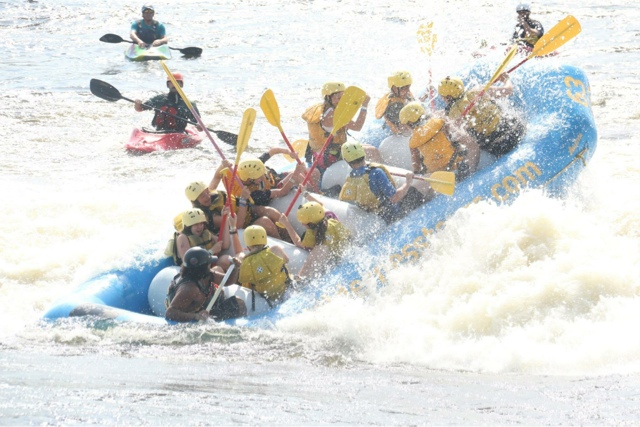 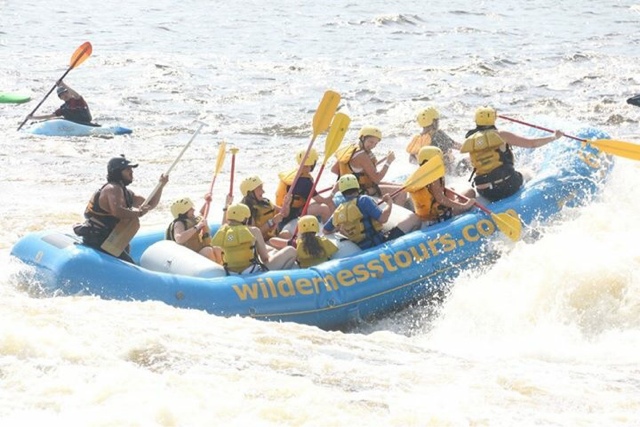 What better way to convey our love for rubber pushing, and the life that Frank loved and was living so fully two years ago, than to fire up a proper custy trip shot for our August cover photo? We got the PERFECT pic, shot by Quinton Kennedy, of DBP Admin and Honey Badger Media House creator Ollie El-Gamel, who started with us only a few months after we began Dirt Bag Paddlers. He is a dedicated hard-core kayaker, but not at all a regular raft guide… The photo speaks volumes about living The Life, but we will let Ollie tell the story behind the scene. It’s a definite dirtbag tale!

“Hi! my name is Ollie El-Gamel, and this photo is from my first time guiding a 12 man raft down the Ottawa river… no big deal right? Well I’m no raft guide but I am lucky enough to work as a photo/video boater for Wilderness Tours and one day I got the call up to guide a trip. So with only a handful of times at the helm of a raft before in my life I gave her my best shot. The best piece of advice I received was think of it like a really big kayak and plan ahead! Right before dropping into the first (and biggest) rapid of the day I let it slip that it was my first time… they didn’t believe me, but they soon would. We punched Phil’s Hole and I even got a guide pop to brown claw – I was so stoked we didn’t flip or loose anybody that I spent the next 20 -30 seconds ripping some mad air guitar, which put us in a pretty awkward spot for the last hole,  where I proceeded to dump truck the entire raft! From the raft I see my guide stick floating away. “Shit! I can’t afford to buy someone else beer too!” So I dove in after it leaving my hapless victims, I mean exhilarated guests, to their own devices. When they asked me what happened and why we flipped I saw the opportunity to pass on a valuable lesson: ‘Sometimes she goes, sometimes she doesn’t. But that’s just the way she goes!'” 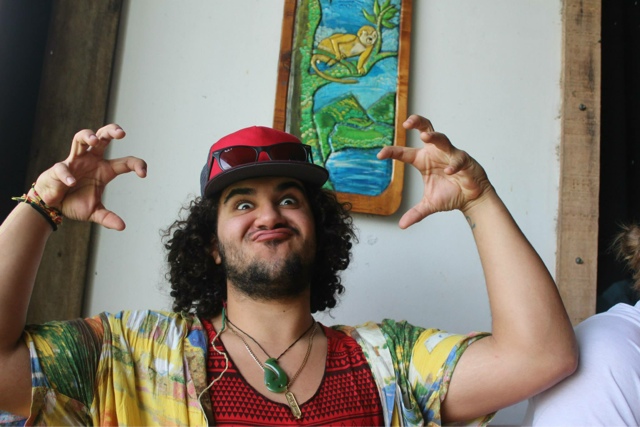 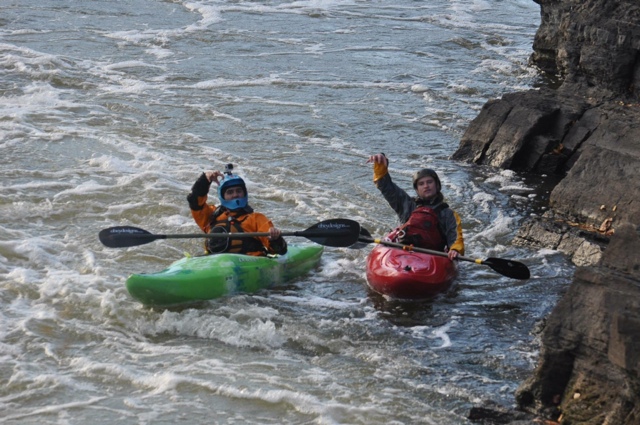 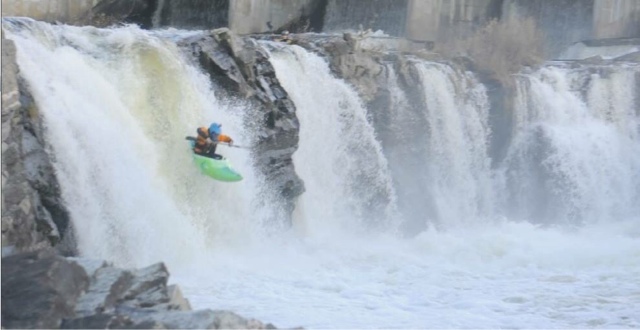 To wrap up this article, we will give you a tale from two Augusts ago, when we first fired up the Dirt Bag Paddlers…
“The Dirt Bag Paddlers started with a bunch of us Kosir’s Rapid Raft river guides in northern Wisconsin in the summer of 2013. We had just had a crazy drunken batch of Chicago customers teach us how to Wallace…”
“The Wallace is roughly based on the legendary shot-blocking skills of former NBA player Ben Wallace. These nut ball Chicago professionals had been getting together for years, since back when the big man had played for the Bulls, shedding their glossy personas far away from the office to get hammered and slap each other’s drinks out of their hands around the campfire. Then when the weekend was done, sober up, drive home, and back to normal life. We loved the way the game was played, and got right into it. By Sunday night, when the custys all head home and all that’s left is raft guides and barbecue, everyone was soaked in beer and on guard. Being the crazy and drunken raft guides we  are, we immediately took The WALLACE to the river and applied it to our carnage terminology.”
“Around the same time (July 2013) three of us went on a private trip out to Pennsylvania to paddle the Yough and party up Ohiopyle, one of the great river towns in America. We took to calling ourselves Dirtbags on this trip, Wallacing beers all over the town, not showering for days, and basically just living out of our tents and paddling, really celebrating the river lifestyle. Thus the Dirt Bag Paddlers were born.”
“There are many forms of Wallace to the Dirtbag. On the river, Wallaces are separated into Upwards Wallace, where the boat is flipped and dumps the entire crew; the Downward Wallace, where the swimmer(s) take an especially nasty deep swim; and the Baby Wallace, where you might find that the dirtbag lost his or her seat, paddle, or maybe a custy or two…And  kayakers and C-1ers are Wallaced when they get worked in a hole, run over by a rubber pusher, and of course anytime they swim.”
“Off the river, Dirtbags are well known by their frequent slapping of beers and other precious articles (such as paperwork) from each other’s hands. They take the same form as on the river, with the added caveat that one must properly declare the Wallace by yelling “Wallace” during the act. The Baby Wallace is a slight bump of the arm that results in slight spillage, kind of like a warning shot… “Hey Dirtbag, pay the f#€k attention!”And never cry or get sore, watching your Wallaced drink soak into the earth! Scoop it up and pound it out!!!”
“In the very beginning you could only be a dirtbag by going on a  mission with one of us… But that didn’t last long. We started a Facebook page (August 2013) designed to make jokes and rep our style of living, figuring our audience would be our friends in Wisconsin that we paddled and worked with… Next thing you know, we got a hundred likes! Us Original DBs were like “you know these people?” “No…” We realized we were on to something.”
“We went out to run the Upper Gauley in September for Gauley Fest, and our little network of friends made over years of paddling expanded overnight. We taught them the Wallace. Suddenly river rats from all over America were liking our posts. So we started thinking, let’s get Admins from all over America to share stuff about THEIR rivers and experiences. See, most river people don’t get to travel too far from their home stretches, because most of us are poor Dirtbags! We thought, what a great way to learn about other places, maybe make some friends and plan some new missions… BAM! It started to take off!”
“The more we shared, the more we realized that our jokes and fun was the same as people we had never met before, from rivers we had never heard of… from all over the WORLD! And we came to see very quickly that our experiences paddling were also universal to us all. We knew The River had no borders, no language barrier, just ONE LOVE! And  of course, Wallace! The Dirt Bag World was born!”
“DBP looks all over the globe for Admins to share their stories. Our Dirt Bag Paddlers Facebook Admin team is from every region of The States and on every continent: Chile, Costa Rica, Brasil, Peru, Panama, Indonesia, Malaysia,  New Zealand, Australia, Bulgaria, Greece, the Philippines, Romania, Nepal, Iran, Kenya, Uganda, France, Turkey, Germany, England, Norway, Sweden, Ireland, Iceland, Canada… And we continue to grow.”
“Dirt Bag Paddlers is all about sharing with the world our celebration of The River, and the paddling lifestyle, as well as bringing together all types of people and cultures with whitewater.  We are free out there, free from the imaginary boundaries that try to separate us from each other.  DBP is raft guides, kayakers, open boaters, shredders, squirt boaters, river boarders, SUPers; we are outfitters, racers, photographers, artists, writers, musicians… Just like our people who like and share with us. We’ll paddle all day with you, and smack your beer outta your hand afterwards cuz we love you. We’re here to Wallace, enjoy life to the fullest, and take you along for the ride. One Love, One River! Cheers!”
Official definition of WALLACE from Urban Dictionary-
http://www.urbandictionary.com/define.php?term=wallace