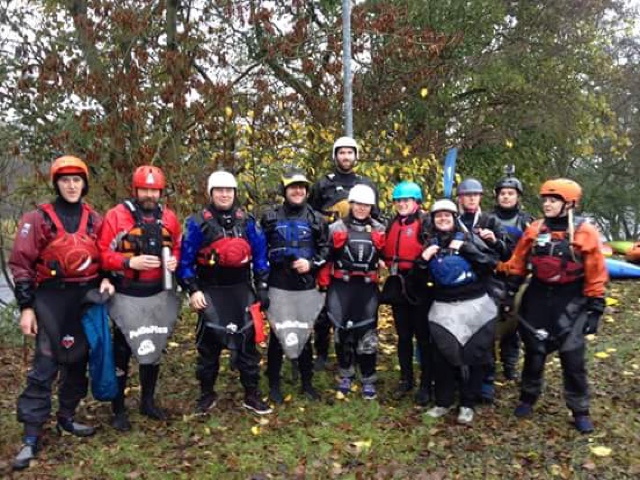 The Tyne Tour was originally conceived to support recreational whitewater paddling, in 1980, at a time when the only way to really get into whitewater was through competitive disciplines. Nowadays, it is hosted by Hexham Canoe Club and the two day event is billed as “EUROPE’S LARGEST MASS PARTICIPATION CANOEING EVENT.” Held last November 5th and 6th, it’s a paddler-packed festival, and the crowd ranges from experienced boaters to student kayaking groups. It’s popularity is no shock as it has a reputation for being a weekend of partying and paddling, with something going on for everyone. There are event goodies such as T-shirts, hoodies, and bumper stickers, and you get a free water pouch which is perfect to keep in your kayak- and very handy for post drinking rehydration!
If you’re missing out on any festivals this year then rest assured, this is the perfect opportunity to get your fair share of mud, as the camping and Ceilidh take place on Tyne Green, which is a flood plain! Wellies are a must as by the end the field will be one big mud bath, perfect for dirtbags. Mud Party!  There are also many different paddling and outdoorsy shops that attend, with stalls from Pyranha, Zet, Mitchell Blades, Alpkit and Desperate Measures. If you ask nicely enough, a few of the shops will also let you demo boats and paddles for the weekend. 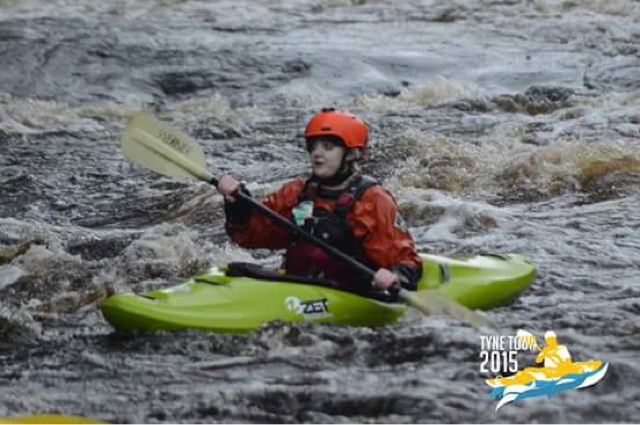 On the first day, our group did another section before the main Tyne Tour stretch called Wark to Barrasford. This section is 7 miles of grade 2ish rapids, with lots of little features but nothing majorly difficult; it was a good chance to do some coaching with the newbies and get warmed up for the next section. This stretch is probably more interesting for open boats than kayaks as there is nothing particularly big, but is a nice paddle. Combining Wark to Barrasford and Barrasford to Hexham makes a nice long day’s paddle, starting easier and getting harder. 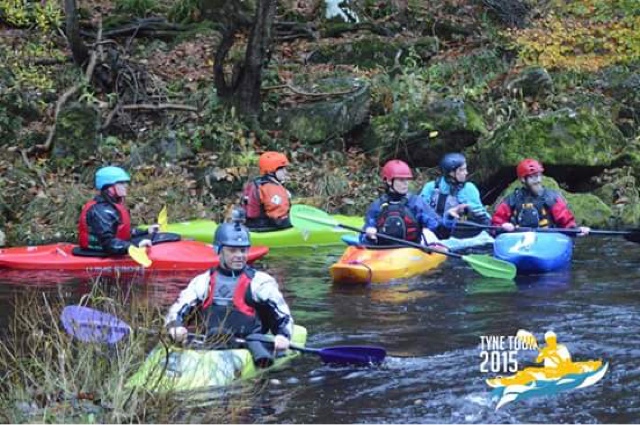 The main run for Tyne Tour is Barrasford down to Hexham, where you can get off a short way from the campsite on Tyne Green. If you’re up early enough, on the first day is the Bobby Timperley memorial Wavehopper Race. Despite the title, this event is open to types of boats and paddlers, from novice to experienced. It’s 7 miles of grade 3 rapids, with odd sections of flat water to regroup in, and a few features. At the start of the run is a rapid with an option of either a bouncy grade 3 line suitable for novices and open boats, or a more difficult grade 4 drop with plenty of rocks to bounce off. We had a couple of swims here on the grade 4 section as there’s a nasty magnetic rock at the bottom. 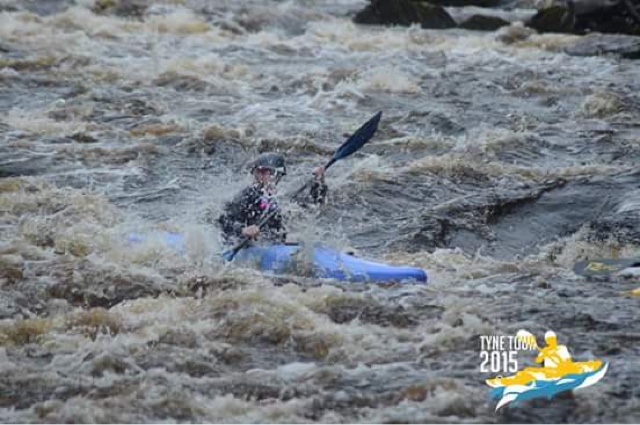 Further along is a large sloping weir; there’s a narrow channel down the weir which is great for kayaks, as the bottom is super aerated and will pull your boat under. I zoomed down and found myself stopped at the bottom. My deck and boat were completely submerged, when suddenly I popped back up with a wobble and paddled away. Members of our group who’d paddled the river before laughed as the new paddlers’ confused faces bobbed above the water until their boats resurfaced. This channel was a bit swampy for open boats unless they managed get the front high enough to sail over the aerated bit, but the rest of the weir was fine if taken at a slight angle. 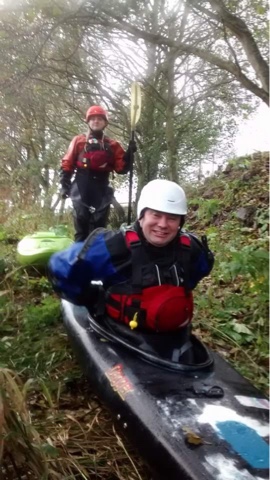 Along the way there are many small rapids as we pass a fort on Hadrian’s Wall, built in 122 AD by the Roman army to mark the boundaries of the Roman Empire and to keep the Scottish out (they were obviously jealous of Scottish rivers). Shortly after is an old mill marking another feature. There are 3 lines, two of them long and bouncy, with the middle line being a slab drop onto rocks. The middle was a good technical line, providing a good challenge for the group. Many who didn’t make it the first time vowed to try it again the next day and succeeded, although, in an eddy at the bottom one of the group valiantly paddled out into the flow to save a fallen (capsized) comrade, which resulted in him swimming, only to watch her roll back up. What a Wallace! 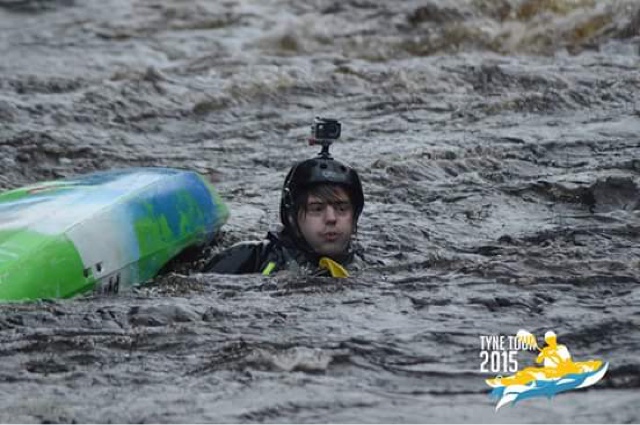 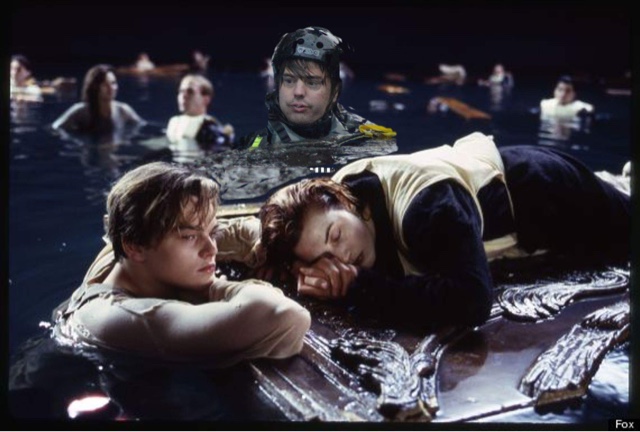 The main feature of this river is Wardens Gorge… which doesn’t really look like a gorge. This was the start of student carnage! This is a big, bouncy, rocky feature with a surf wave at the bottom. There was a lot of safety at the side of the feature as it’s notorious for causing a lot of swims from inexperienced Uni paddlers. We watched a few student groups get thrown down it, lines flying in every direction, before we gulped down our fear and meandered down one at a time. I crashed through, avoiding rocks as much as possible and paddling hard through the wave, to meet the rest of my group in an eddy at the bottom. We stayed for a while in the eddy to sit and watch the Wallacing and rescues unfold before a long flat paddle to the get off. 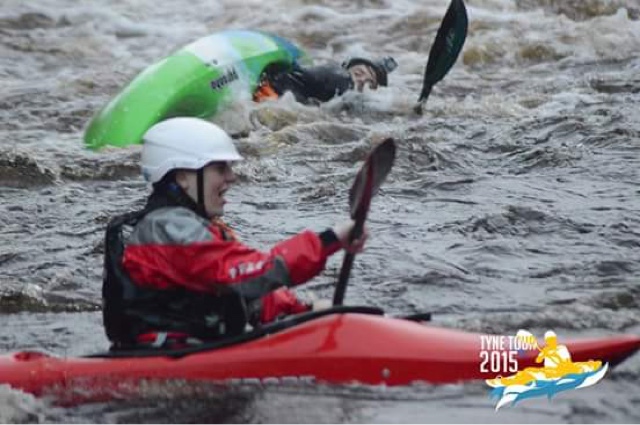 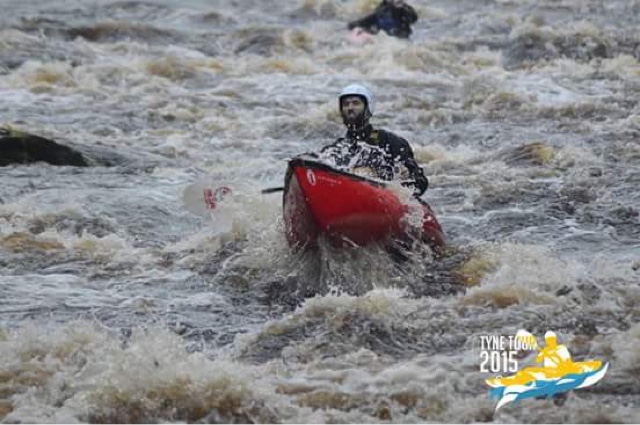 Saturday evening was the Ceilidh, which is a traditional Irish group dance (think line dancing). At first it seemed odd, but after a couple of student-priced beers and a jagerbomb, we got right into the swing of it. Once midnight strikes and the Ceilidh is finished, or you’re just all danced out, Hexham town is only a 40 minute walk. But ladies be warned it’s uphill, so beware of the heels! 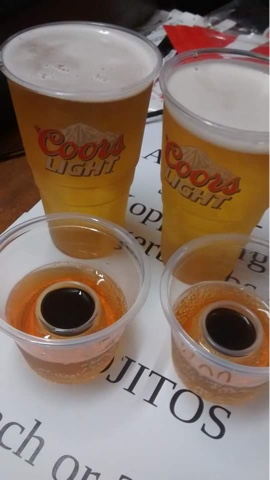 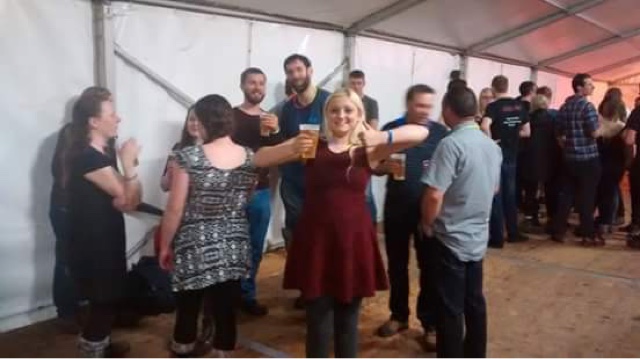 Then it’s time to soak up your hangover with a full English from the nearby cafe and pack up your mud-hut. By this point the green will look far more like a brown, so it’s very appreciated that the organisers tie bin-bags to your tent while you’re asleep. There’s normally just enough time to fit in a hangover run down the river, with weary arms and aching abs from paddling, dancing and laughing, before the drive home. Once home, be prepared to hose off your tent, sleep plenty, and text your paddling friends saying: “Can we go again tomorrow?” 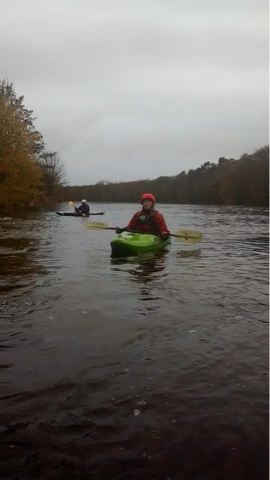 Tyne Tour info-
http://www.tynetour.co.uk
On Facebook-
https://m.facebook.com/TyneTour/
Hexham Canoe Club Page-
http://www.hexhamcanoeclub.co.uk
some footy from Tyne Tour 2015
STORME SPARKES is a longtime member of the Dirt Bag Paddlers Facebook page, and a valued contributor to the Mag. She wrote an excellent article on the challenges of paddling with anxiety last year. Check it out!
http://dbpmagazineonline.blogspot.com/2015/06/paddling-with-anxiety-and-panic.html?m=1