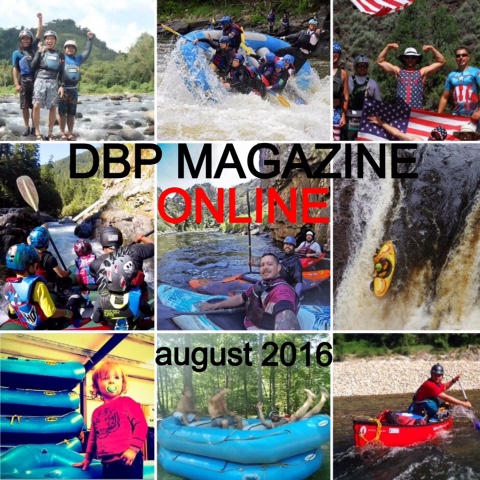 FROM THE EDITOR’S DESK:
Three years back seems like a lifetime ago… It was three years ago that Jason Flannery, Nick Guarniere and I “borrowed” some boats from Kosir’s Rapid Rafts in Wisconsin to escape the heat of hard work for an extended paddle vacation. We drove from Silver Cliff to Ohiopyle, PA and somewhere along the way the idea of Dirt Bag Paddlers was born. We didn’t expect much. It was going to be a Facebook page for the local Peshtigo and Menominee rivers rafting community, a couple dozen boaters at best. We had zero aspirations or any expectations for what was to come…
Fast forward to now. August 11th will mark three years to the day that I opened the page with a post from our Ohiopyle shenanigans. DBP has become a worldwide phenomenon. We’ve assembled 150 Admins from 30 countries and every discipline of the community to bring you whitewater entertainment, which has led to 14,000 members and counting on that Facebook page with such humble roots. In November 2014 we rolled out this Magazine and an Instagram account days before Thanksgiving, to thank everyone and give even more back to the community for all the love given to us. 5800 followers on Instagram later, and over 163,000 reads from nearly 200 countries, and all I can say is, THANK YOU EVEN MORE! The One Love One River Philosophy continues to fire and inspire me and everyone at Dirt Bag Paddlers each and every day!
We decided to really fire up our Birthday celebration with a bang by dedicating our entire August magazine to the rivers around the world that we call home. The “Our Rivers, Our World” issue is filled with stories by the DBP Admins. Look for stories from the Ocoee, Ottawa, Yough, Gauley, Wolf, Pigeon, Payette, New and more as the month unfolds. 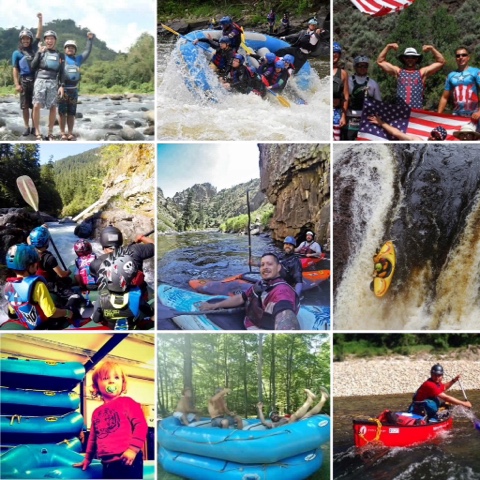 The Editorial Staff thought, “what better way to get things started than with a collage cover of photos submitted by our friends in the community?” We wanted to thank all you Dirtbags from around the world for pitching in to help us celebrate our 3rd birthday by submitting your photos that helped us create the cover for this month’s DBP MAGAZINE ONLINE! Everyone who submitted photos will be mentioned at the end of this story, and they all got a free limited edition DBP WALLACE decal for their effort. And one lucky person’s name was pulled from the hat to win a prize package from our friends at Cascade River Gear and a “TOTALLY DIRT BAG” shirt from Relise Designs. That person was Mr. Paul C Eckel of the River Warrior Family in Oregon. We asked Paul to tell us a bit about the passion for The River that he has, and that he has instilled in his awesome young family. We’ll turn the stage over to Paul.
——————— 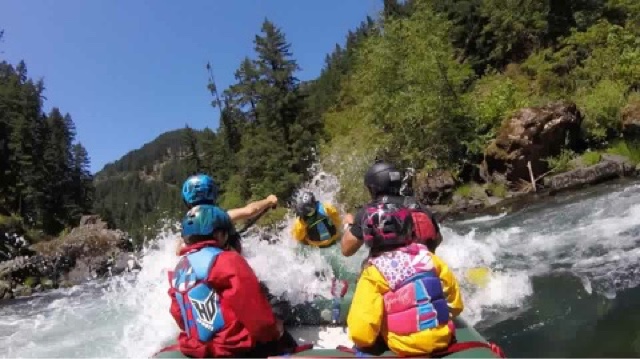 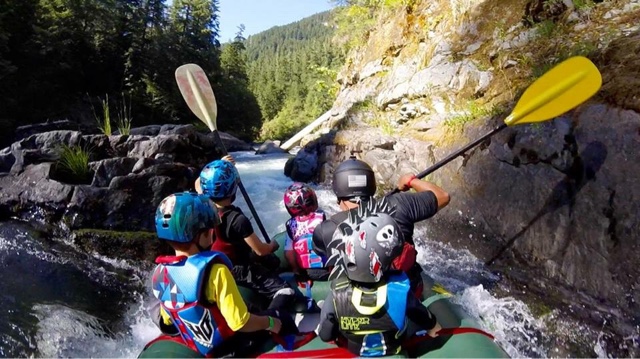 The children became addicted to the rapids and could not get enough of the river. It dawned on me a few months ago; our raft is a bounce house that moves over incredible water that splashes over our bodies. If properly introduced, what child would not love that??????????
https://www.youtube.com/watch?v=IZuPjNmbcmE
I am a father, with wild love for my children. The whitewater heals almost any emotional pain and offers a freedom that only those who venture into those gorgeous turbulent waters will ever understand.  I have been asked many times what brought me to Roseburg, OR and my answer has been the same, “A series of unfortunate circumstances, but the river has been my salvation.” I have been accused of being an Adrenaline Junkie with a death wish. My response has always been the same, “I am not an adrenaline junkie. The river is pure, it is honest, and free to everyone. There is a lot of fun in those waters, if you respect the river, have the right gear, and develop the skillset to enjoy the Liquid Kingdom.” I have been told that I am being reckless with my children. My response has been the same, “I am a Swift Water Rescue Tech, EMT with the State of Oregon, Compete at a National Level, and apply the same discipline to all our runs as I did when I was operational for the US Gov., the difference now is that I get to apply that skill-set for my children’s benefit, as we venture into the Liquid Kingdom.  All the children are trained in Swift Water Rescue and a Safety Brief is given before every run and before every significant river feature. I started a highly disciplined unit from birth and obedience is taught as a fact of life, not for my benefit but for my children to enjoy life. I have thanked my children every run and tell them, “Because you are such good children [who listen and obey exactly what I tell them to do] we can do things that most families cannot even dream about doing because, well they are normal children [who generally do their own thing and do not listen to their parents].” The lessons we have learned on whitewater cannot be put into written words here and would require a book. I do know that the river has given to our River Warrior Family more than we could ever give back.
Our goal has always been to live life to its fullest capacity.
https://www.youtube.com/watch?v=1G2vCOTLmEs
Whitewater offers the opportunity to discover your true self and work through the journey, with incredible perspective of a landscape that brings tears to my eyes as I sit before this computer screen. Our philosophy as the River Warrior Family cannot be understood without this small vignette of my life’s story and the current we have chosen to paddle. I grew up afraid and fear was my companion. I promised to give my children the gift of “fearlessness.” We choose the river because of its purity and honesty, in a life often tainted by so much less. We embrace the roar of the rapids
for the reward and joy they offer. Can you hear the laughter from my children fill the air, as we explore what many people told me could not be done?
They looked at me and said, “You can’t do that,” to which I replied, “Why not?”
Dream – Believe – Persist – Achieve
We want more families to get out in the river and enjoy the whitewater, and if we can inspire anyone to overcome the “Carnage of Life” and find healing in the rivers…all the better.
God Speed & C U Down River.
1-Love-1-River
River Warrior Family “out.”
https://www.youtube.com/watch?v=7CvzxLlX7Yc
Special Thanks to:
​Ocoee River Guide – you planted a seed that is flourishing many years later
Peter Newport – owner of Sawyer Paddles and Oars
Steve Kielsling – Gold Hill, Oregon Whitewater Center creator
Bill Blodgett – Owner North Umpqua Outfitters for all the N. Umpqua River “Beta.”
​Cody – Saturn Rafts
Drew B. – Owner of  “4 Corners Whitewater” (Durango, CO) for being our mentor and friend at a critical time in our development
​Dirt Bag Paddlers – sharing our story and encouraging us, when many were anything but
​Uno (age 10) – my 1st born and the best at all you do – Front Left Paddler
The “little” River Warriors (BG – 7, Sweet Petunia -5 & Little Beast – 3) – for being an
awesome crew to love and be a father 2. ORT (Oregon Raft Team) – inspiring our family to pursue the dream of beating you one day!
​​
—————–
Now THAT is what it’s all about! Passion!! Right on River Warrior Family! You are most definitely Dirtbag to the core!
Now for some love for the others who sent in photos to help us celebrate the One Love Philosophy that August’s cover embodies. We picked one offering from each entrant. In no particular order- 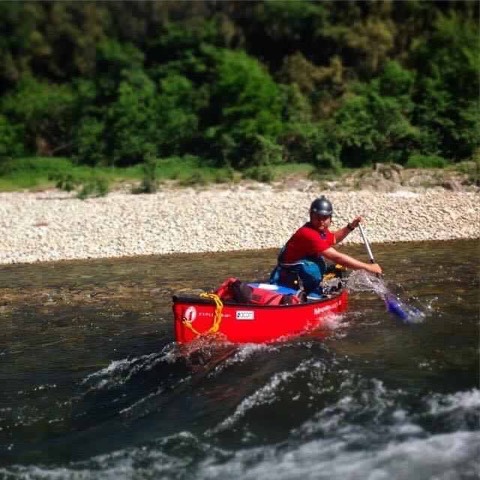 Mark James: “Out grafting on Can Opener rapid on the Ardeche.” 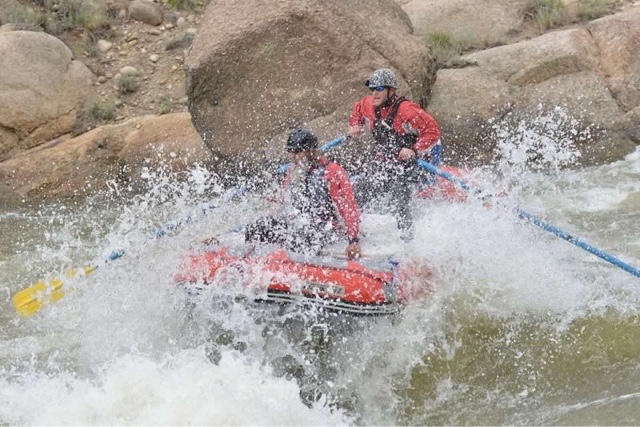 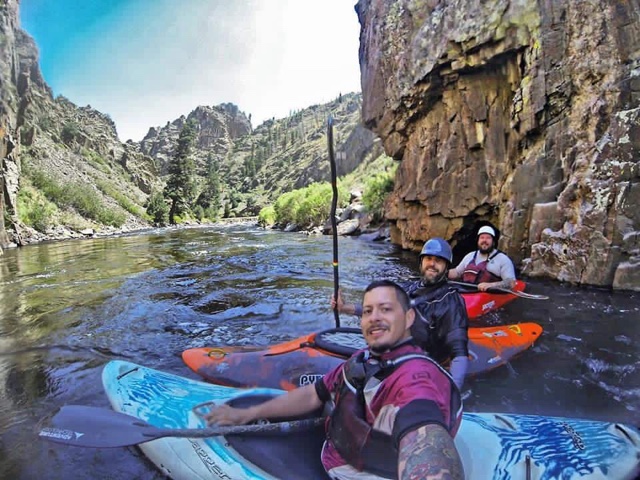 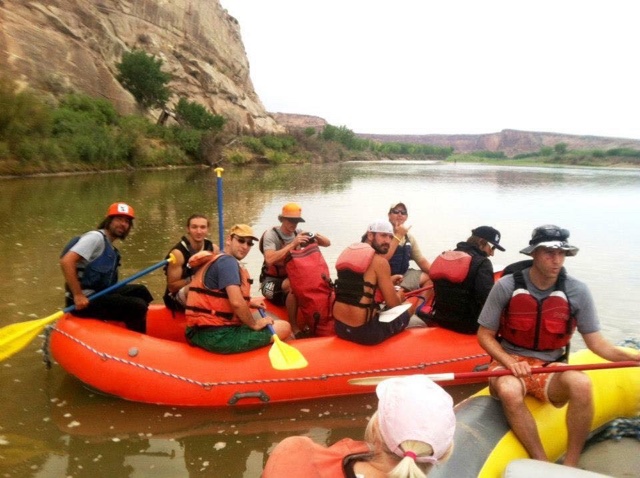 Anthony Coontz: “It’s nice being a dirtbag on your own but it’s even better when you have someone with you! — at Cataract Canyon.” 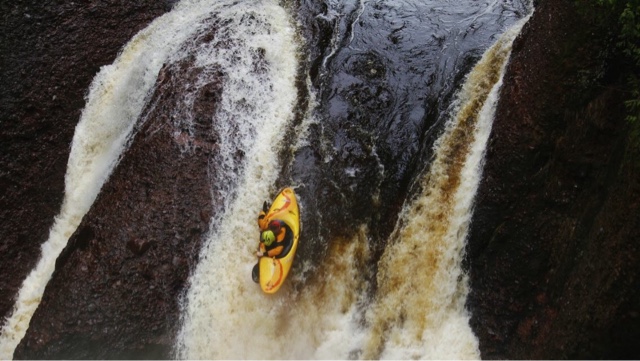 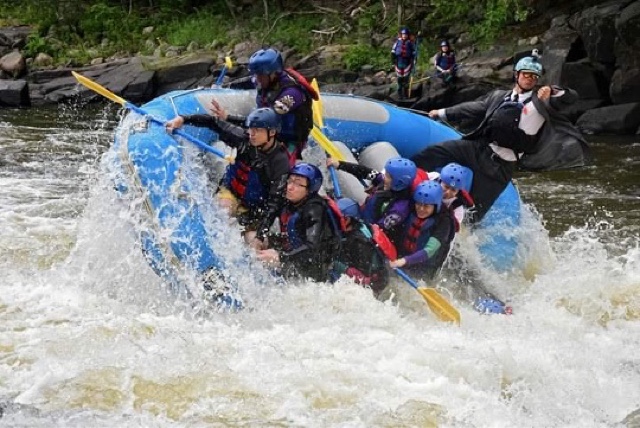 Carl Atl: “Right on time for another great day at work. Red River, Québec. We get a healty dose of thrills in ours everyday work at the office” Credit: Rob Gravelle 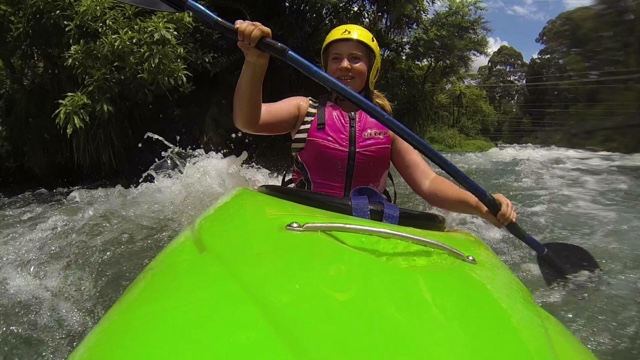 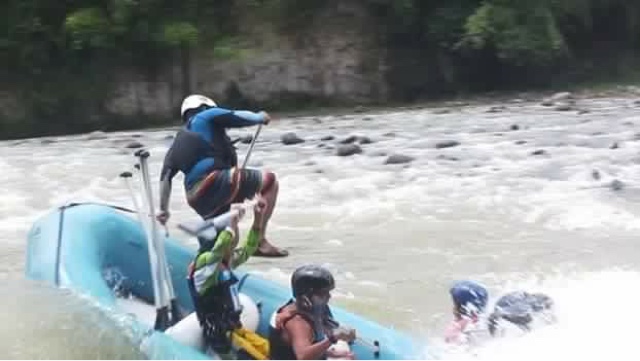 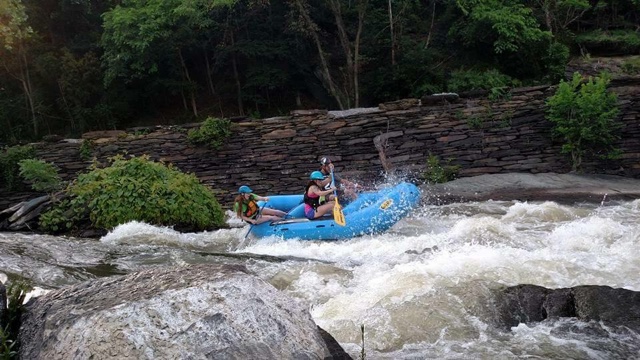 Heather Colwell: “Bull Falls on the Shenandoah River in Harpers Ferry WV. I fell out right after the pic was snapped.” 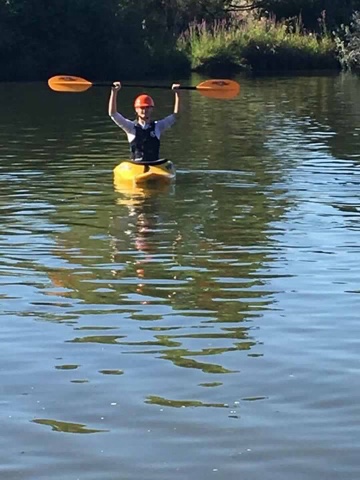 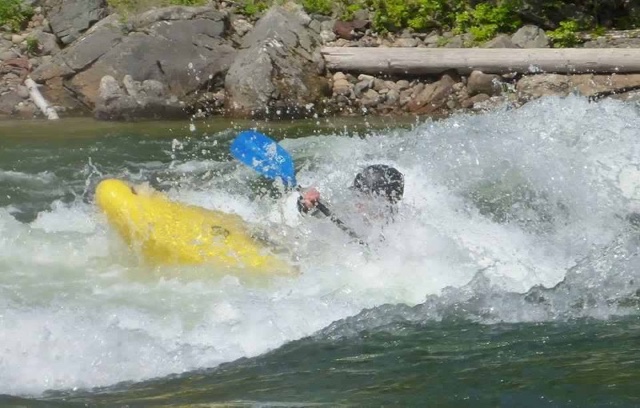 Tony Atkinson: “Slocan river in beautiful BC. Where it all started for me. Photo shoot at Jump Rock.” 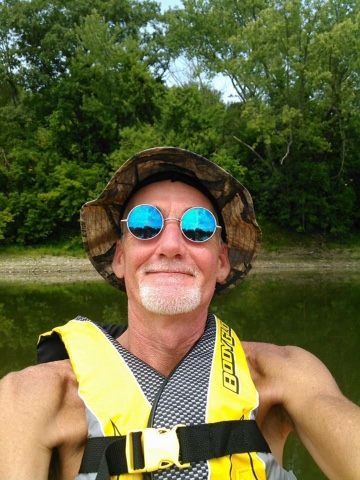 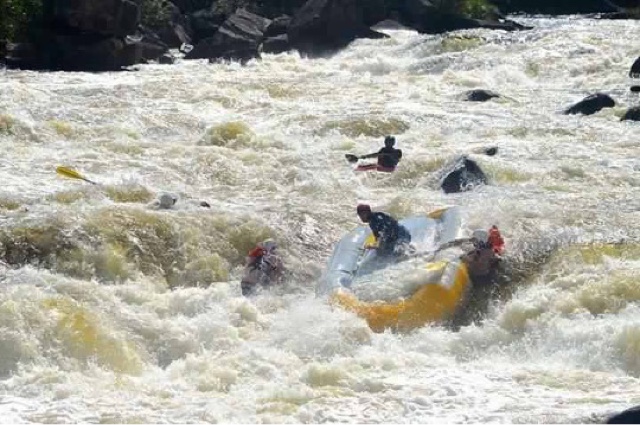 Sollie Hirsch: “Pretty sure I boofed a raft customer. Paddling into some chaos, in the final drop of Cribworks, west branch of the Penobscot, Maine.” 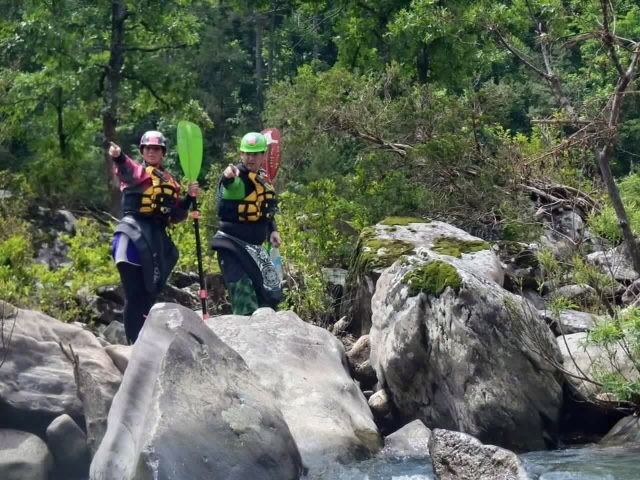 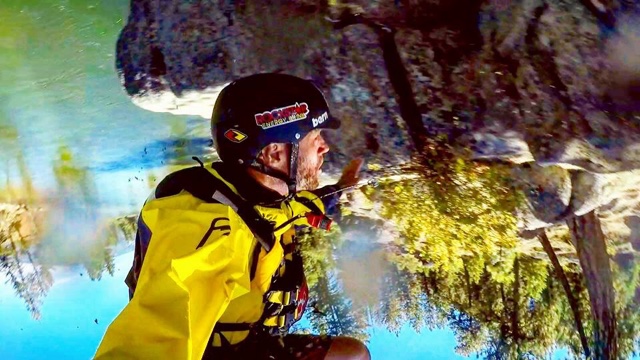 Shane Dobbs: “There’s so much to Gainer on the South Fork Payette!!” 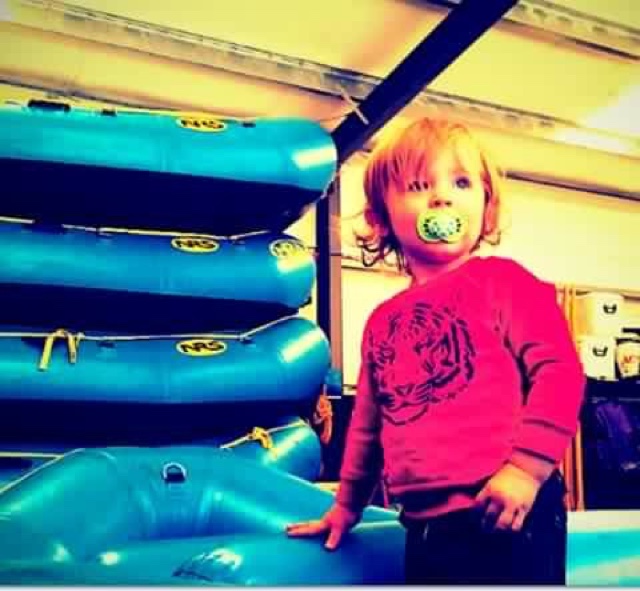 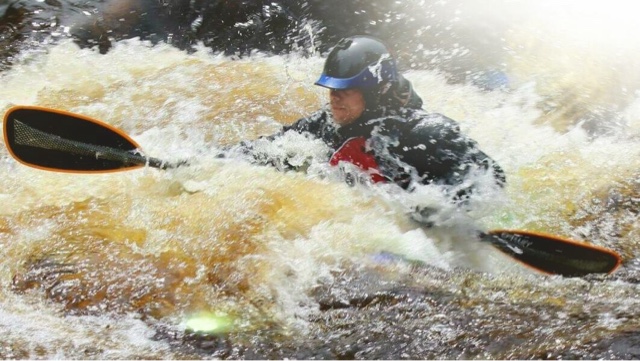 Jayson Moskow: “This was my first run of the year on the Peshtigo. We made an early morning run with the river at +7. As you can see, the curler at first drop almost swallowed me whole. Great trip with some great Dirtbags!” 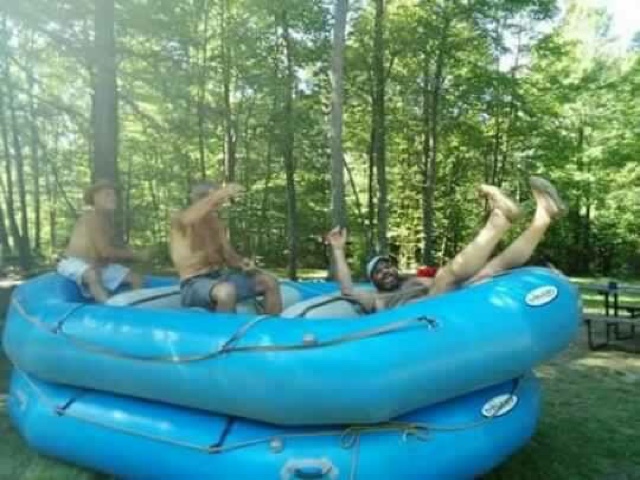 Kevin Lamb: “We were in Rays Campground in WVA, by the New River.  Weset up camp for Blue Ridge River Runners and couldn’t wait for whitewater, so we made do.” 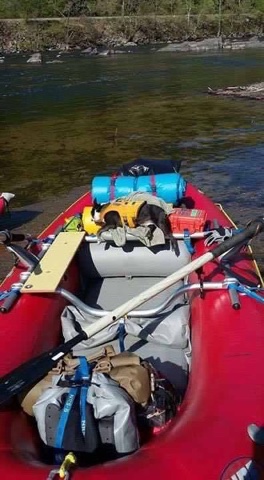 Adam Fontana: “Photo of Simon grabbing some z’s at the bottom of Jump Rock Rapid on the James River, Balcony Falls run.” 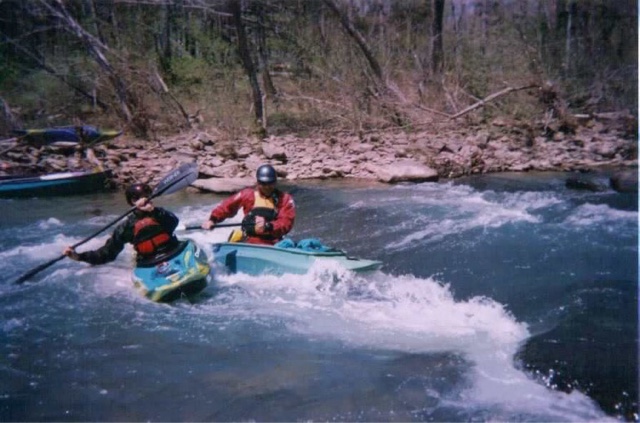 Scott Parson: “The picture was taken of a friend and I on a surfing wave above Turners Bend on the Mulberry River a few years ago.”
Thanks again to everyone for sharing their love with everyone! Rep those custom decals WITH PRIDE!
We’ve got a few more surprises in store for the Birthday, so stay tuned… I’ll give you a few tidbits. One is, look for Dirt Bag Paddlers to roll out a Snapchat account on the big day… And the Colorado Dirtbag’s are in for a mega treat, when Aaron Erdrich hosts our Birthday Bash at Gore Fest… Details coming on our Facebook page!
That’s all for now!
“Chicago” Mike Toughill
Editor-in-Chief

Some of the best faces of kayaking. Happy Anniversary!