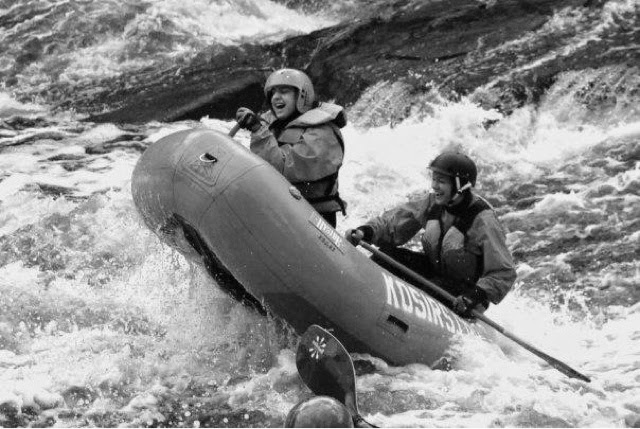 When I first started paddling the Peshtigo River in Wisconsin I was a customer. And what does every customer love to do? Look at the ridiculous face they make in the biggest rapid on the river, of course. At Kosir’s Rapid Rafts they had the ultimate setup: pictures and video tape (yep, way before digital when helmet cams were but a glimmer in the eye…) playing at Rapid’s Resort, the local watering hole located at the takeout. There I sat with my friends, drinking cold beer and laughing it up at the “oh!” faces streaming across the screen. Priceless. 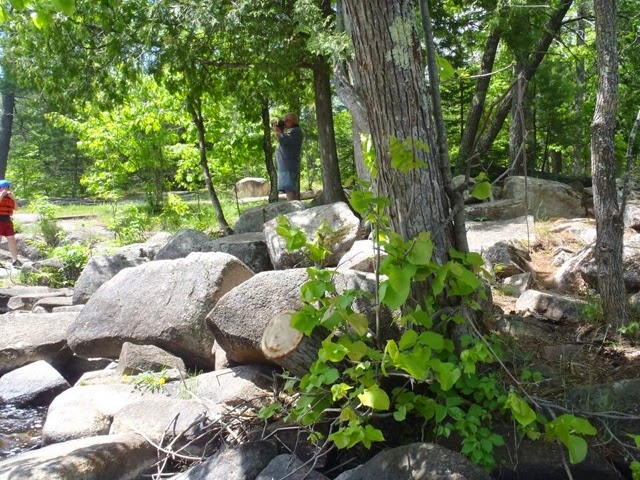 (a shot of Ray working at First Drop)
Ray was the man tapping away at the computer, an old desktop PC with the bulky monitors of yesteryear which he had dollied in from a beat up old truck parked outside. I went over to pay the man, and struck up a conversation, and a friendship for life. Turns out Ray was also the man behind the lens, who with his partner Chris operated Riversport Photography. He told me that many years back he too had come up to the Northwoods to paddle for the day, and had fallen in love with The River. Here he was now, pouring his heart into his passion for whitewater through his lens but with the eye and timing of a paddler. He couldn’t get out regularly on the river, but every trip he made his way down a rugged four wheel track to the side of the first big rapid to work his magic. And magic it was. 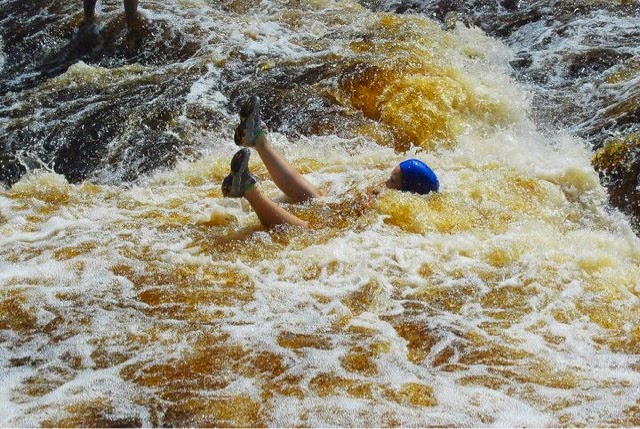 I’ve often told people that Ray Booth is the finest whitewater photographer I’ve ever seen. He mastered his craft in the days before digital cameras made everyone’s job easy. His timing is impeccable, and he still snaps each frame without auto, hammering hundreds of pictures a trip, each fully focused and framed. His mastery of the tricky lighting conditions of whitewater composition is amazing, where the differences in settings between a bright and dark day or morning and afternoon runs mean so much. He can go on and on about the subject, information lost on most of us who just point and click our iPhones. 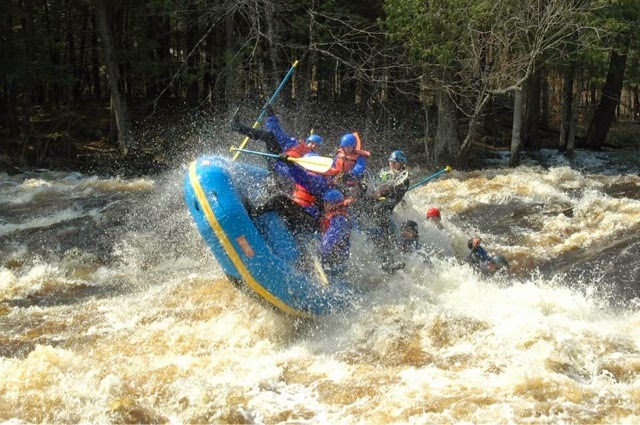 I had the opportunity to take Ray down the Peshtigo in a raft about five years ago, just him and I R-2ing the day away on a private trip. It was Spring time, our favorite season up north, and the river was running high. At Five Foot Falls I Wallaced and Ray was there to pull me in. We stopped to take pictures at a few rapids, and at the last stop he forgot his paddle, and I ran us the rest of the way while Ray chilled and enjoyed the moment. It had been many years since he had run the river, and the look on HIS face was priceless. If only I had had the camera this time, but the image is seared in my memory, the best camera of all… 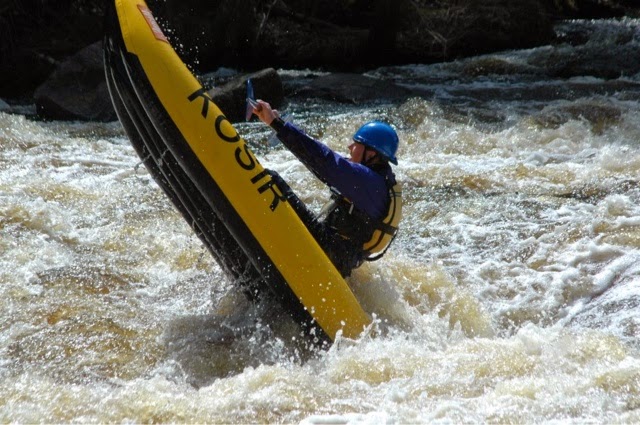 Ray was one of Dirt Bag Paddlers’ first fans on Facebook. He sent us this message when we first got up and running. It speaks for itself. Cheers, Ray! You are DEF DIRTBAG, buddy! 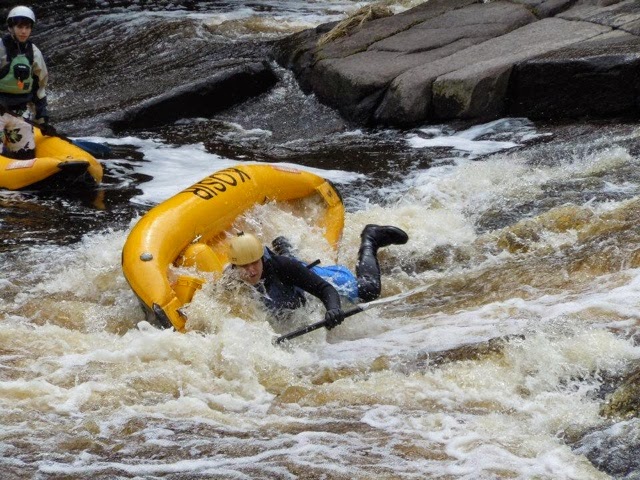 “Twenty four years ago I started paddling at Kosirs. Ten years later, I made the big move.
I spent everything that I had setting up my house. It took every paycheck and working my ass off on it on weekends for a year and a half to make it habitable. As soon as it had electricity I quit a $20/hr job (in 1999) and moved here with $500 in the bank an a $150 car to be at Kosirs. I lived here the first for 4 years without running water.
14 years after swearing off prosperity I have $9 in savings, my shoulders are fucked, my knee is blown out, and I am down to bout 20% lung capacity. I can’t paddle like I used to, but my heart is owned by the Peshtigo River. When I die the party will be at Kosir’s and my ashes will go into the river at First Drop.
With that in mind, I would like to respectfully submit my application to be a dirtbag. Not a dirtbag with my usual nasty car/nasty house/nasty sneakers, but as some one who gave up everything to be here.” 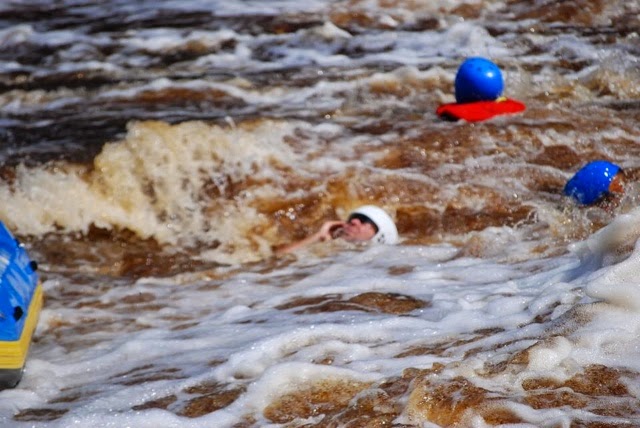 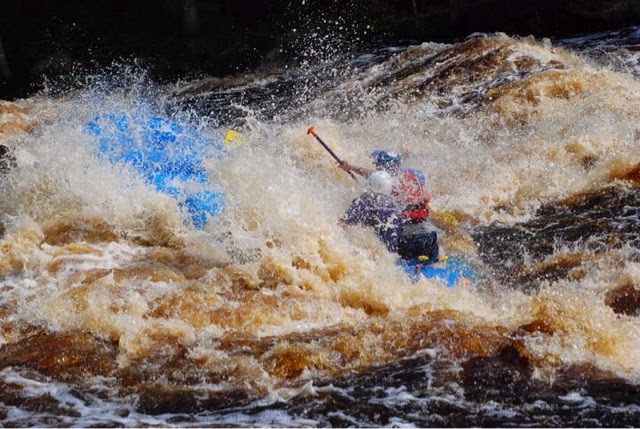 ALL PHOTOS BY RAY BOOTH.