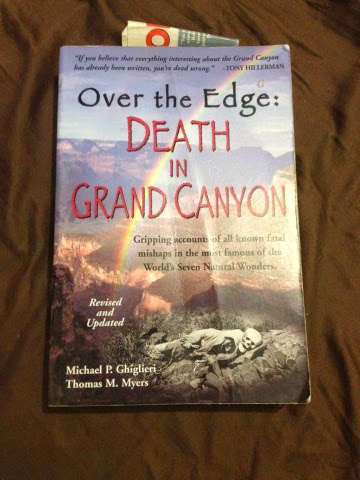 Getting ready for your epic mission on the Grand? Or just cooling out after a great season this year…Whether the Wallace was delivered from the river, from the rocks, from a fall or from a thunderbolt, even an airplane, this book has EVERY SINGLE documented death in the Grand Canyon. From the famous to the unexplained, you’ll be along for the ride in this fun read.
Excerpts from the book:
CHAPTER THREE “FLASH FLOOD!”
…”we heard the horrible sounds – absolutely terrifying… Not of water, but of people way upstream screaming in terror and warning those downstream.”
Okie and Janecek froze in the mouth of Havasu for about ten seconds listening to the screaming get even louder. Then it came, a beautiful, nearly six-foot-high wall of blue water with a 45-degree slope. It metamorphosed into a ten-foot high, nearly vertical wall of muddier water in the narrow mouth. Okie and Janecek had leaped to a high ledge. Below them the flash flood snapped all the remaining bowlines “like popcorn.”
Eight boats in a vibrating mass of ropes, gyrating oars, and logs shot from the mouth into the river…
CHAPTER FOUR: THE KILLER COLORADO
…struggled violently for several minutes to get out from under the raft. Failing to extricate himself, he continued to lay on his back under the water with his head aimed downstream. At least one of his feet, it still seemed, remained trapped under the overturned raft.
Those on shore watched in dread as Solares struggled frantically to keep his face above water and gasp for air…
CHAPTER SIX: FREAK ERRORS AND ACCIDENTS
…the recirculating “eddy” water at the foot of the falls – again opaque due to recent rains – held Leimkuehler in a Maytag effect, recycling her in a static location, tumbling, tumbling, tumbling under water.
George scampered to the base of the falls and scanned for Leimkuehler. Nothing. She shallow-dived in and tried to pull herself along the bottom against the current to reach the recirculating water where Leimkuehler must be. But, perversely it seemed, the creek swept George downstream. George tried again. Again no dice. She looked up at Kim and asked if he had seen Leimkuehler.
Kim, in hysterics, sobbed, “No”….
{from the Editor: DIRTBAG BOOKCLUB has been a regular feature on Dirt Bag Paddlers page on Facebook. We will be transitioning it over to this site. To follow us on Facebook, please visit us at https://m.facebook.com/1worldwidewallace THANKS!}

0 replies on “DIRTBAG BOOKCLUB: OVER THE EDGE: DEATH IN THE GRAND CANYON by Mike Ghiglieri & Tom Myers”

i love this book as much as i love seeing tourists slide out onto an icy ledge of the canyon to get a picture. "Just back up a bit" says the photographer…..