Skip to the content
Big Splat and Broken Glass: An Epic Day on the Big Sandy
by The Dogg

It had been a long dry summer in the Mid-Atlantic and low water had people
going crazy, doing desperate things for attention. I couldn’t check Facebook without
being bombarded with such nonsense as the modern day carnies known as Candy
Crush or the Ice Bucket Challenge. The state of things had reached a new low, I hadn’t
seen that many people covered in ice water since the Titanic! Well, we finally got some
rain in the mid-Atlantic after 6 months of drought and I was stoked for some gradient. I
was burning inside for some boofs with the intensity of a thousand white-hot suns, or of
a urinary tract infection for those in the low brow humor crowd! There were several
options with which to whet my palette and we ultimately decided on the Big Sandy. The
Big Sandy is one of the classic Class 4 runs in Northern West Virginia and it’s claim to
fame are two 20 foot waterfalls, the second of which is a solid Class 5+ drop. These
drops cause joy to fill my heart, like a silent but deadly fart filling a room with closed
windows!

My stepson, Bailey, and I drove out to Jenkinsburg (the takeout) in the morning
to meet up with Dave Kersey, Jamey Moore, Ian Lienhard, and Wookie. Because the
day was so nice, we decided to add 5 extra miles of steadily building whitewater as a
warmup. The putin in Bruceton Mills is right above a 6 foot dam. As we floated around
the pool, waiting for everyone to get ready, a cop pulled up. Knowing that nothing good
would come from talking to the officer, I took off downstream and over the edge of the
dam. If he wanted to talk to me, he would have to catch me first! His police cruiser is no
match for the speed of my Fluid Bazooka! The rest of the group followed and the cop
eventually left. The first 2 miles are fairly flat and I could sense some trepidation on the
faces of the other paddlers, wondering where the whitewater was.The group looked as
confused as a homeless man on house arrest but I assured them there was quality
kayaking not far away. The rapids eventually started and we were treated to long
stretches of Class 2-3 boulder gardens and slides with many boots and slots. Before we
knew it, the Rockville bridge came into sight and we were on the lower section, where
all the real whitewater is.

We continued on, bombing through the many Class 4 drops that this run offers.
Everyone had nice lines off 20 foot Wonder Falls and the stoke was high. Soon, we
were in the pool above the biggest rapid on the run, Big Splat. Most paddlers on this run
walk this rapid but there is a core group of intrepid daredevils that fire this drop up on a
regular basis. My goal was to get at least one person in the group to run this rapid.
Dave, Bailey, and Wookie all said that they were going to portage on the right bank but
Jamey and Ian were able to be wooed over to the left side to check out what this drop
had to offer. I knew they would not be disappointed.

Big Splat is one of coolest rapids in the state of West Virginia IMO (as the young
kids nowadays are saying). It packs precise moves and extreme consequences into two
closely spaced drops. The approach rapid is a 5 foot sloping ledge that feeds into a
tight slot between a boulder and a horseshoe shaped ledge. The horseshoe hole is
horrific looking and dropping into it could ruin your day, especially with what lies
downstream. We scouted the line and Jamey and Ian thought the move was doable. I
showed them the line, driving past the narrow spot and boofing high on the horseshoe
ledge. I waited in the pool and watched Jamey and Ian have great runs. I think both of
them were a little surprised at the strength of the current pulling toward the main drop.

They had to scramble like a wildebeest running across the Serengeti but they made it to
the safety of the eddy. We hopped out and I explained the line before hopping in my
boat and laying down a righteous boof. The main drop slopes down before hitting a
boof flake and falling into a narrow zone next to a huge boulder. Pitoning here would
really knock the rust off your rudder! The boof here is so sweet that I had to walk back
up to run it again. I encouraged the boys to go for it, telling them that hitting the boof
was as easy as taking candy from a diabetic man who no longer eats candy. I fired off
another SIKy for good measure to help reinforce my point. As I carried up through the
woods for a third run, I heard some yelling and cheering over by the river. Ian had
decided to go for it and had a perfect run. Jamey was getting ready for his run and I
was stoked that I would get to see it. He drove hard left and got a sweet launch. He
yelled out that he was coming back up to run it again. I fired off another boof and
decided to carry back up again for a 4th run. I know what you are thinking, “Dogg,
you’ve already laid the Smackdown 1, 2, 3 (and the Dogg means 1, 2, 3!) so why would
you risk it a 4th time?” Don’t worry, faithful reader, I won’t let you down, unlike some
people from these parts. You see, just one day prior, the West Virginia University
Mountaineer football team got embarrassed on national television by the Texas
Longhorns! It’s true! It’s true! In genuine Dogg form, I fired up another sweet boof
followed by Jamey with a nice line of his own. 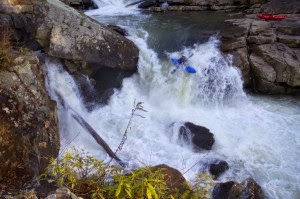 The remaining miles of the run provided us with more boots and slots than you
can count. What a fun day! Most write-ups about paddling adventures would end here
but not this one. We were back at my car smiling and talking about what a great day it
had been. I got out my key and tried to open the door to my Pathfinder. That was when
I realized that I had put the key to my Versa on my lifejacket and that my Pathfinder key
was sitting in my pant pocket, just inside the vehicle. It was a rude shock, like receiving
a surcharge at an ATM that was previously surcharge free! The takeout is in the middle
of nowhere and we had limited resources with which to try to jimmy a door open. It was
getting cold and the sun was starting to drop below the horizon like an old lady with the
gout sliding into a warm Epson salt bath. After trying a couple things unsuccessfully, we
decided that we had no other option than breaking into the vehicle.We chose to break a
small window near the back of the car, thinking that would be the cheapest to replace.
Once in the vehicle, the rest of the trip back to the putin and then home went smoothly,
However, the small window near the back of the vehicle is actually the most expensive
one to replace. Let me tell you, when I saw the bill for the window, I was more
disappointed than a duck with a corkscrew penis trying to get laid. But that is another
story…