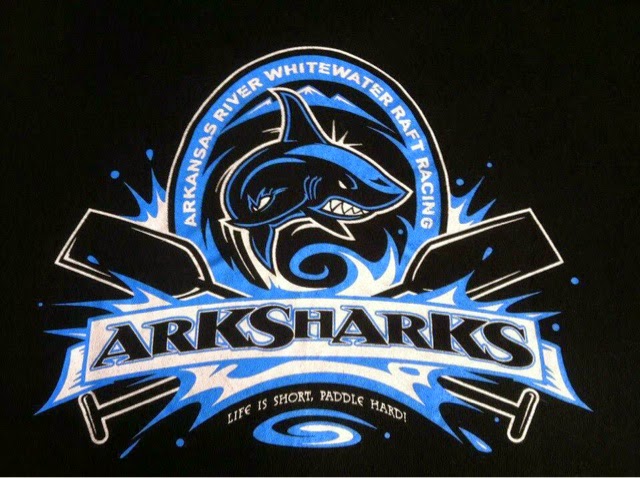 {editor’s note: this article first ran on the International Rafting Federation website, ON JANUARY 21ST, 2013, well before these guys became the official Team USA. Since then, they’ve competed in China and Brazil, and we’ve included some photos from their Facebook page.
They’re some good dudes whom the Dirtbags paddled with for a bit on the Upper Gauley during Gauley Fest 2014. We are proud that the Ark Sharks represent America to the world.} 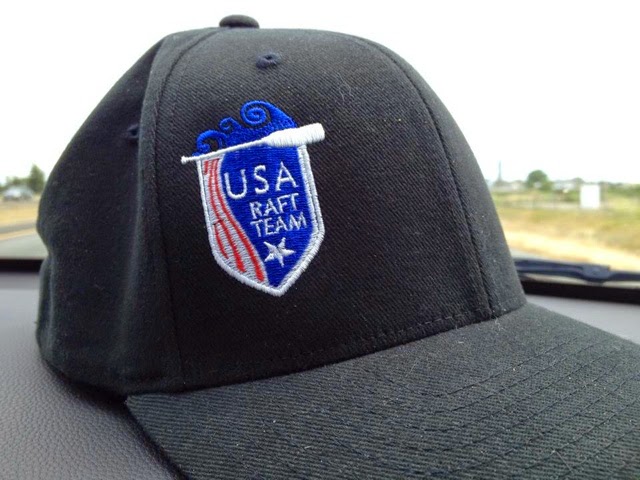 Matt Norfleet, Josh Bradford, Jere Burrell Jr., Austen Dyer, Jeremiah Peck, Eli Norman and John Anicito are team members of the “Ark Sharks” from Colorado, USA. They have a combined 65+ years of rafting and paddle sports. All members of the team have been working as river guides in Colorado and have spent most of their time working the Arkansas River, hence the name Ark Sharks. When not working they like to play on the river with kayaks, canoes, SUPing, anything river related. 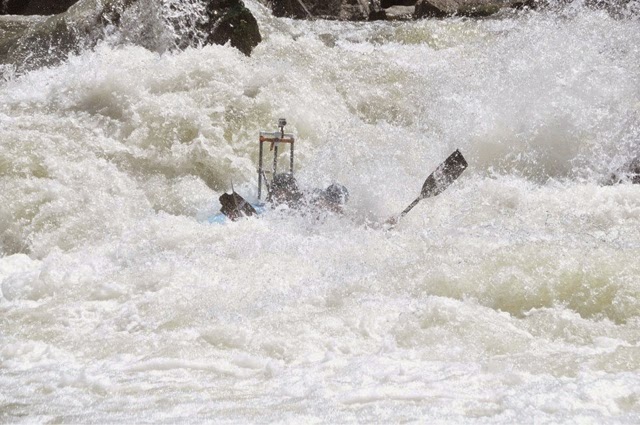 But how they got started, how they train, what their goals are … John Anicito will introduce us to that:
“The Ark Sharks started paddling in December of 2009  in preparation for the US Rafting Association National Championship, which selects a team to represent the US at the World Rafting Championships. As a first year team we placed 2nd, and we quickly realized that to paddle against the best in the world we needed to practice and train harder.” 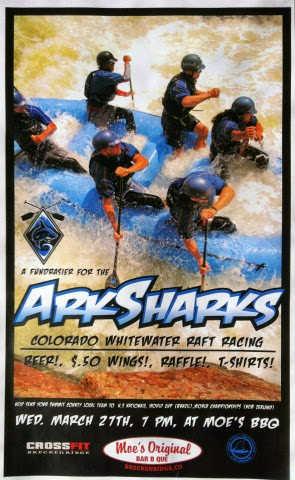 So how does your training work now?
“We train most of the year between paddling and Crossfit of Breckenridge, to maintain a high level of fitness, to be ready to paddle against top teams in the world. Most team members live in Breckenridge, Colorado which is covered in snow for 6-8 months of the year so we have had to get creative with our practice schedule; chasing weather and water flows can be a challenge.“
Being first at the national level gives you the opportunity to compete in the WRC. Is that your main goal?
“Our goals have changed over the last few years. At first we just wanted to be competitive at nationals. Now our focus is on winning nationals, which is a huge challenge. We have to beat one of the top teams in the world. We really want to race at the international level, so we train and practice even through the winter.“ 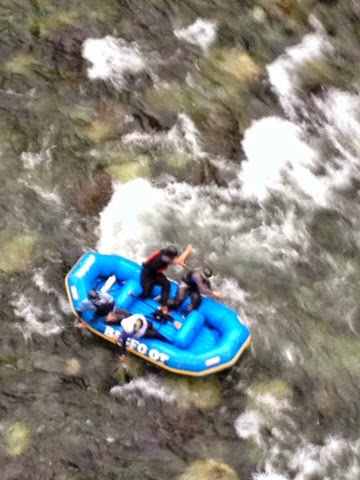 Have you thought of going to the Pan American Champs, or a World Cup or Euro Champs, which are open events (you would not be considered for medals from Euro Champs, but to have the opportunity to compete with all the European clubs who go to the WRC), and so its not necessary to be the first in the country to qualify for these events?
“Yes, we are planning on traveling this year, regardless of how the national race finishes. We feel this will give us some great experience and insight into the next level of racing. Our fundraising starts in just a few weeks for the upcoming summer.”
Which river for you is the most technically difficult to paddle, related to competition? 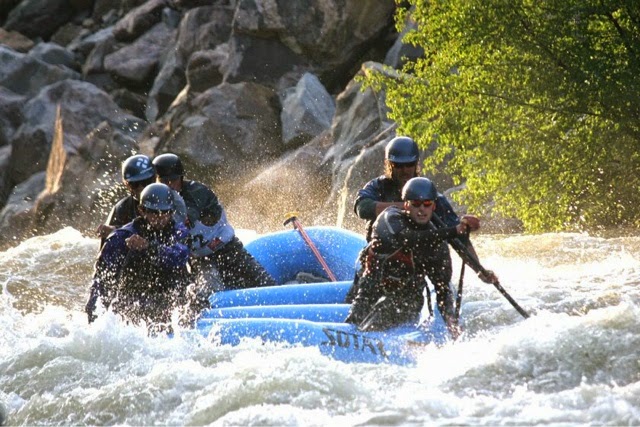 “Gore Canyon on the Colorado River is the most difficult race in our area, it’s rather short but it has some Class 5 rapids that are very challenging. We finished the race in 2nd place this season with our best time. 23:23 Here is a clip from the race: https://vimeo.com/56950890
If you watch the video you will understand what they are talking about!
Is there a discipline that you particularly enjoy?
“Head to Head is awesome, battling for position and the excitement of having another team next to you really gets the heart beating. However, Slalom is great too. I like how technical the courses can be. It’s the one event that really showcases a team’s talent.” 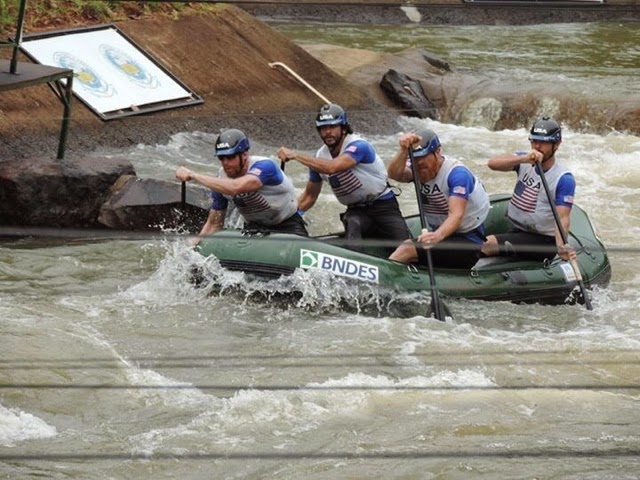 What kind of results have you achieved so far?
“Since the start of the Ark Sharks we have finished in the top 3 of the 18 races competed in, most of which were in Colorado, USA. We have also traveled to Oregon, Idaho, and West Virginia to race.” 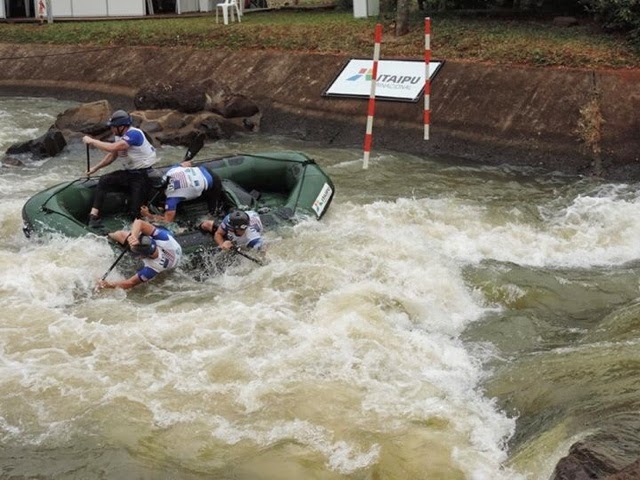 This team is on a good track to be successful, and are aware of the hard work and effort that must be done. Their competitive nature and love for the river keeps them motivated and on the path to compete at the national and soon international level. 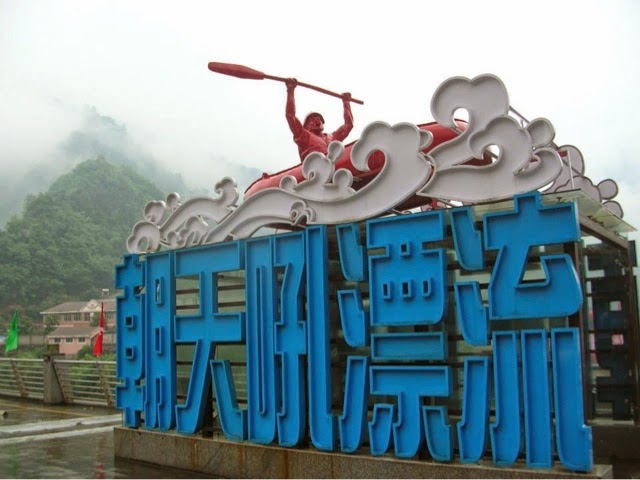 One question to end: it’s related to the beard that many rafters in the USA have. Is it a fashion among the rafters, or just a coincidence?
“I think the beards are a sign of the lifestyle here. Many river guides live in tents or the back of their trucks and are not able to shave everyday (or for months).”
That’s a totally wonderful spontaneous thing. Certainly they look very manly with a beard! 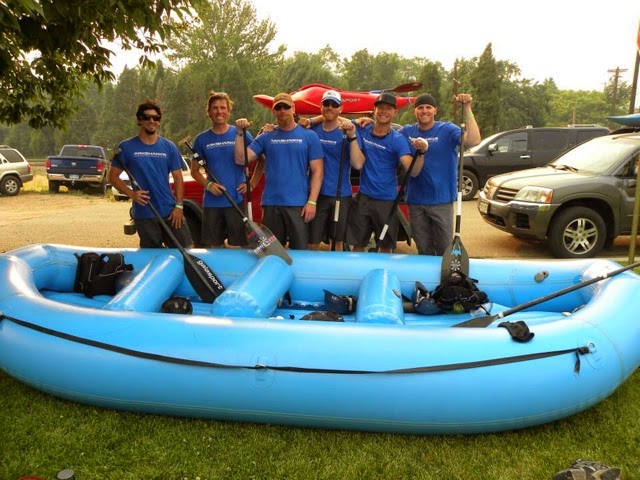 {Def Dirtbag, fellas, Def Dirtbag! Cheers to these boys in 2015! ~the editors}
ARK SHARKS on Facebook:
https://www.facebook.com/ArkSharks
Some great footy of the boys in action:
Cal-Salmon Race 2014
Colorado Goes to China
To help fund the Team:
http://www.gofundme.com/USARaftingBrazil2014