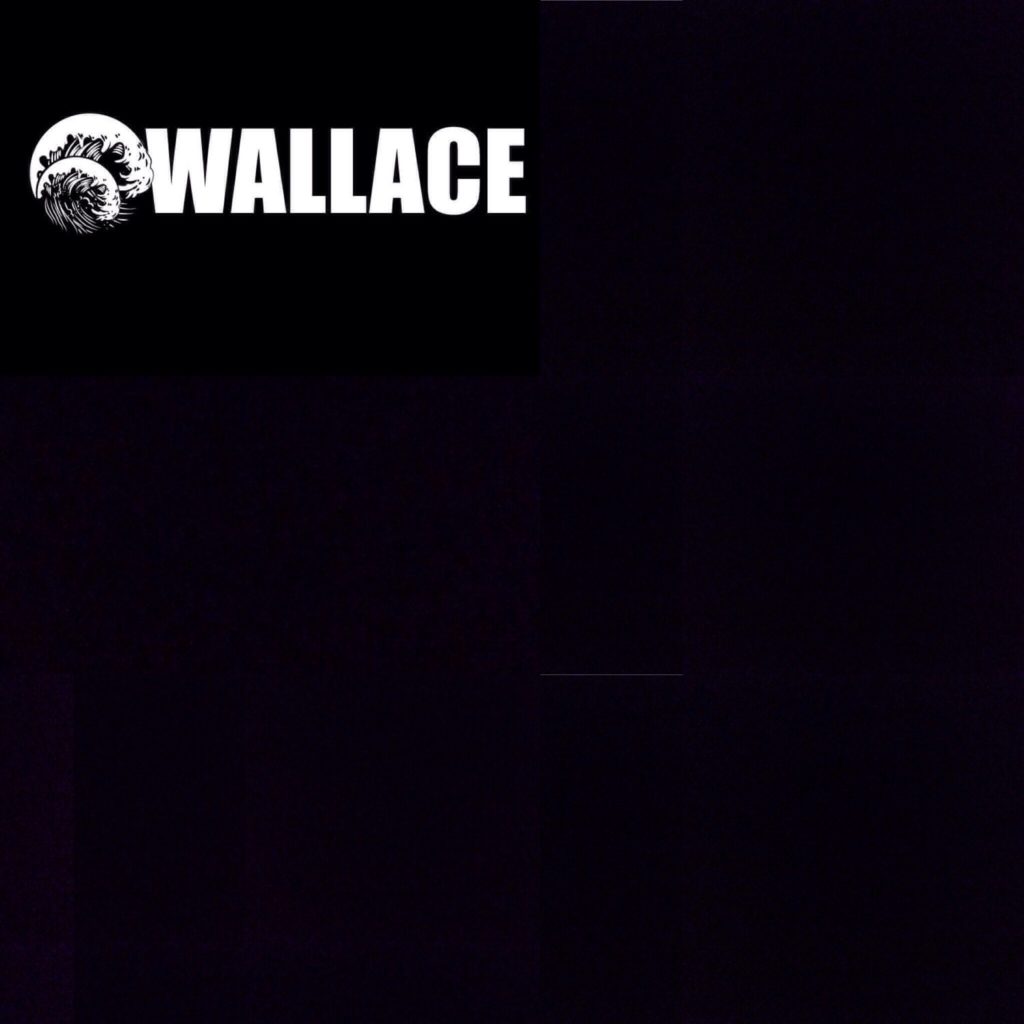 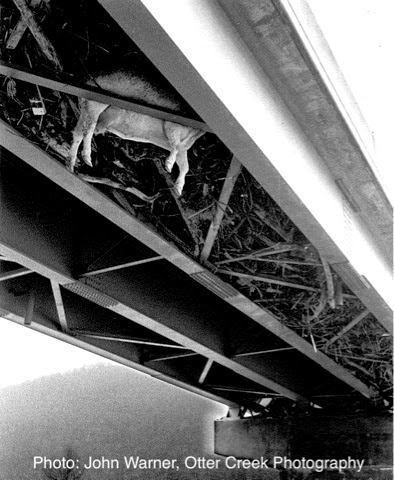 PART TWO
West Virginia’s record-shattering flood of 1985 ended lives, deposited livestock carcasses in the girders of bridges and scoured entire towns from the face of the Earth. It also rearranged rapids in a well-traveled, commercially rafted river called the Cheat.
But at the campground on Friday, April 11, 1986—the eve of Black Saturday—guides and customers alike were excited. The flood was a half year past, for one thing. And after a winter of low river levels the water was finally up again. The river was running in the neighborhood of 5-6 feet on the bridge gauge, so the first big day of Cheat Season held the promise of a true spring adventure. While guides had heard rumors of minor changes and had some inkling there were new rapids in store, they had no idea how utterly unprepared they were to face them. The flood had peaked at more than four times the Cheat’s previous high-water record, and the changes would turn out to be far more dramatic than anybody expected.
The first part of the day, however, unfolded without incident. Rafts and kayaks faced inconsequential challenges in middling rapids and almost cruelly, confidence levels soared.
But then the river doglegged right, Big Nasty Rapid rumbled on the horizon and the day devolved into an orgy of carnage. Minor changes?! Big Nasty pre-flood barely deserved its name. Big Nasty post-flood had obviously grown into it. Once an unremarkable wave train, now a voracious wall of recirculating fluff, Big Nasty methodically dismantled the psyches of even the most experienced guides on the water, as it swallowed entire flotillas with malevolent glee. Estimates are that 75% of all the rafts on the river flipped there, and that’s not counting the dozens who simply fell out into icy springwater, which was little more than melted snow gushing out of the high country.
Guides and guests alike were shocked. The more experienced Cheat guides were also the unluckiest, for only they realized the implications of what was occurring. There was still a lot of river left to run and they could just imagine what lay in wait downstream.

There was still a lot of river left to run and they could just imagine what lay in wait downstream.

Below Big Nasty, trip leader, Mark Lewis, reassembled his shattered group and shouldered on. It had taken every ounce of persuasiveness he and his guides could muster to convince their terrified guests to get back in the boats. And yet, in his most horrific imaginings, Lewis was careening out of control to his destiny downstream. He had just lost his glasses for one, and he feared another slapdown on par with Big Nasty—or worse—awaited them all at Coliseum Rapid.
His fears were not unfounded. 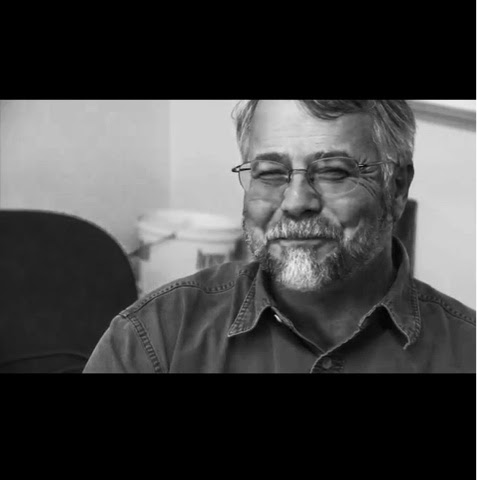 Of the 1985 flood, Lewis says that, “It moved things around. It created islands, and it destroyed other islands that were there for thousands of years. It scoured places in bends and it just…” He pauses; resets. “In 30 years of river running, I’ve seen some changes in different places on the New and the Gauley, but never anything like what happened to the Cheat.”
If Big Nasty was the warm up jab, then Coliseum was to be the river’s haymaker. Just below Big Nasty, even though the current is swift, there’s eventually a bit of a pool in which a swimmer can recover. But at Coliseum the major new features—and the site of the day’s worst carnage—were at the very beginning of a looonnnnng rapid. 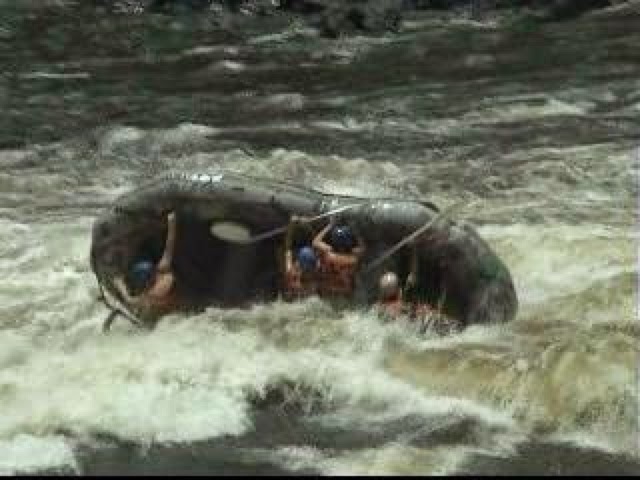 Coliseum becomes pushy just when its lines also get technical. On Black Saturday, smart guides snuck through the rapid on the left without hitting anything too consequential.
Unlucky guides went for the center. After a section of relatively minor water, there’s a shed-sized boulder. Just downstream and right of it, there’s an enormous hydraulic lying perpendicular to the river’s flow. It’s called the Recyclotron. Don’t go there. If you managed to slip past the boulder without hitting the Recyclotron, you still had to deal with something called the Particle Accelerator… and a massive boiling eddy line… and something called the Cloud Chamber, where according to Lewis, “the entire world just went white and fluffy.”
After Upper Coliseum, there’s a slightly mellower section and then it all picks back up again for Pete Morgan Rapid, which some people think of as Lower Coliseum. It’s fair to say that none of it is fun to swim. 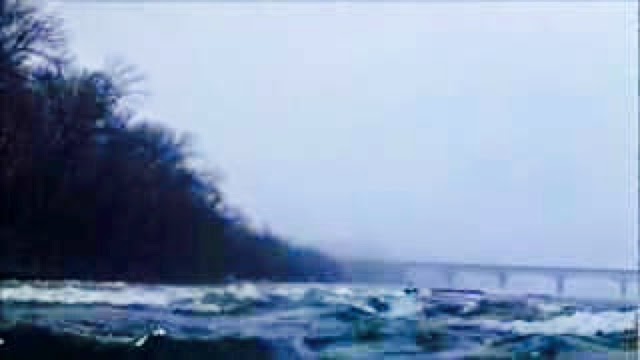 Sans glasses and not knowing any of this, Lewis drove his raft straight into the Recyclotron. “I. Got. Crushed,” he says. “But we made it though!” 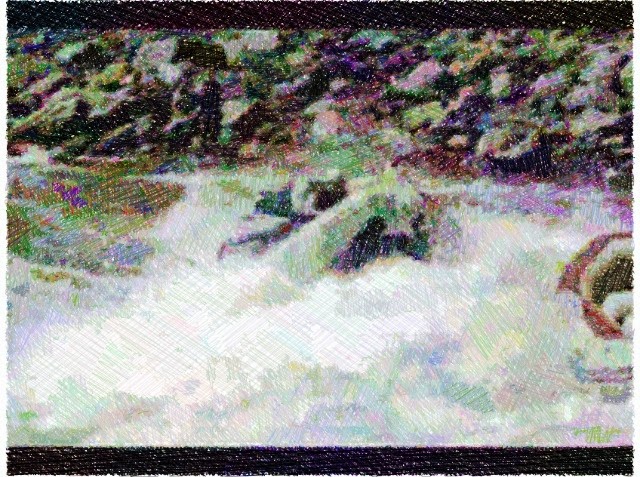 “And then I’m looking at the Particle Accelerator right in front of me, and it’s all blurry. I tried to turn into it, but we didn’t quite make it and we lost four people out of the front of the boat.”
They didn’t flip, though, and from somewhere below the Cloud Chamber, Lewis chanced a glance back upstream. “And again, boats are flipping. Boats are dumping. Almost nobody is running it clean.” He managed to collect his swimmers and eddy out on the right.
When he turned back to the river… “There’s this continual parade of swimmers coming down. And we’re eddied out just upstream of rock features that were never there before, a sort of box canyon with sieves.” If you don’t know what a sieve is on a river, think pasta. The rocks are the strainer. People are noodles—but the boiling water never ends.
To Lewis’ nearsighted eyes, bobbing blurry heads were everywhere, faces contorted with fear, he imagined, as they gasped for air and contemplated the shear brutality of the swim laid out before them like a gauntlet of breaching Orcas.
Lewis grabbed his throw bag, heaved it and hit one swimmer, who he pulled in just above the sieves. Quickly, he gathered his rope and threw for the next swimmer. “So, I just start bagging people,” says Lewis, “because they’re going to swim down into this bad stuff. I keep pulling people in and recoiling the rope and throwing it again. Every time there’s a break, and I’m about to get back in the boat and move on down to figure out where the rest of my trip is, another boat dumps people and I have to bag them, too. At one point I had, like, 15 people I had bagged and brought to the shore there, and I was telling them, ‘Just make your way down the rocks. Try to find your trip. Look for boats from your company.’ I couldn’t put them all in my boat. There were too many of them.”
“Those two places,” continues Lewis, “Big Nasty and Coliseum—just, I mean, they wore everybody out. I’ve never seen such a brutal ass-kicking laid down on so many guides and guests in my entire life. If you talk to other people, I think you’ll get similar memories. When we finally made it to Cheat Lake that day, we were shell shocked, because no one had ever experienced anything like that.”
Mercifully, Big Nasty and Upper Coliseum were the only two sites of mass carnage on April 12, 1986, the day we now call Black Saturday. Miraculously, there were no deaths and zero reports of serious injuries.

When we finally made it to Cheat Lake that day, we were shell shocked, because no one had ever experienced anything like that.”

Oh, egos were torn to shreds by the hundreds. And if dignity were measured in pounds, we could safely say that ten or twelve Nile hippos worth of it never left the river that day.
But the Cheat is a technical river, so guides there were good at what they did. And indeed, Black Saturday is testament to their ability to lead, because that canyon is not like some other rivers where there’s a hike-out option. I wonder how many of them had conversations akin to, “No, I’m sorry. You can’t walk down. Continuing in the boat is the best thing we can do. Please. It’s okay. Get back in the boat.” Several of them, I’m certain, had to do it more than once. 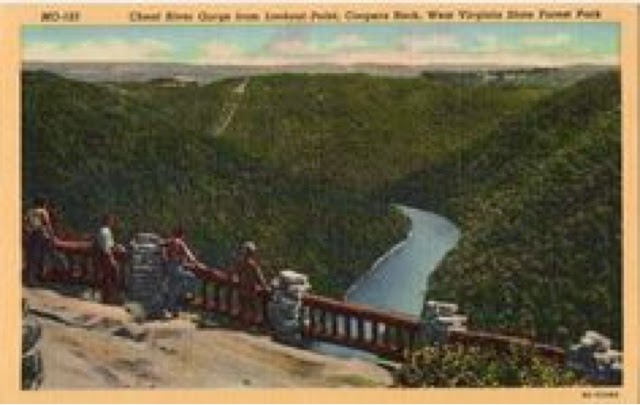 Black Saturday occurred before the cash-for-trash heyday of the 90s. Flips and swimmers were largely unacceptable then and nobody flipped rafts on purpose. But while that level of carnage would never be seen again on the Cheat, the 1986 season unfolded somewhat more violently than usual, as every guide on the river had to relearn how to run it.
To boot, the flood didn’t just change the Cheat River once and done. Rocks in the riverbed were accustomed to yearly floods of 50-60 thousand cubic feet per second, not 250 thousand. There was so much current and so much pressure from onrushing water that it destabilized the river for years to come. Today those same rocks are still easier to move—those rapids easier to change—than at any time prior to 1985. Coliseum, for example, is quite different today than it was on Black Saturday, and it may be that Big Nasty is actually easier.
Today, Cheat Season is a fraction of its once glorious size. Far fewer outfitters run it with their guests, most having moved operations south to the New River or north to the Yough. Some of them are no longer in existence. Most people point to later pollution problems on the Cheat as the prime culprit for the demise of commercial rafting there. Some say towns like Albright just never embraced tourism, like their counterparts, Fayetteville and Friendsville.
But a few, like Mark Lewis, still get a far-away look in their eyes when they talk about that sunny spring day in 1986. To them, Black Saturday was the real tipping point. To them, the biggest casualty of the day was Cheat River rafting itself.
{editor’s desk: Jay Young recently authored Whitewater Rafting on West Virginia’s New & Gauley Rivers: Come On In, the Water’s Weird, an objective history of southern West Virginia’s commercial rafting industry. Here’s a link to his work:
http://ironarchmedia.com
And Facebook page:
https://m.facebook.com/IronArchMedia1
THE ORIGINAL FOOTAGE. Special thanks are in order to Jay for getting this transferred from the original to a copy that is viewable for all, and preserved for history. Without his efforts it is likely these images would have been lost to posterity.
“On Saturday, April 12, 1986, Paul Marshall stood on the right bank of the Cheat River with a super-8 camera. He hoped to capture some action from the day.
A year earlier, a monstrous flood had swept through West Virginia killing 54 people, erasing entire towns from the map and destroying every whitewater rafting outfitterfoolish enough to place its headquarters riverside. But on this April weekend, Paul watched those hearty souls return along with thousands of paying customers. They were excited. The terror of the floodwas behind them and this was the first big day of Cheat Season. Unbeknownst to virtually all of them, however, the flood had drastically rearranged the river bed.
Two rapids in particular had borne the brunt of the flood’s fury. Big Nasty and Coliseum were forever changed. Though Coliseum arguably experienced the more dramatic changes, Big Nasty reigned in shearvolume of carnage. Estimates are that 75% of all the rafts on the water flipped or lost swimmers there.
Paul rolled tape. What you see here is about an hour worth of distilled chaos from a day that would cometo be known as Black Saturday. It is the single most carnage-filled day in American whitewater history. Miraculously, no fatalities, nor even serious injuries were reported.
LINKS:
Support this local non-profit, FRIENDS OF THE CHEAT:
https://m.facebook.com/groups/52328656469

Support Cheat Fest, their major fundraiser, and a damn good time to boot!
https://m.facebook.com/Cheatfest
Like the article? Help us out! We want to keep bringing you the best paddling features and news.
Share
Tweet
Pin
0 Shares

How to Freewheel By: Alex DePue