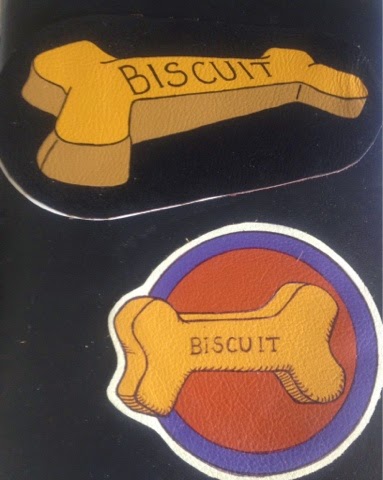 I first saw him when he was a tiny pup, less than four months old. Construction on the highway not far from my house was in full swing. They were hauling, spreading and compacting tons of red clay to elevate parts of the roadway using huge road building machinery. I saw him running for the cover of a D-9 bulldozer one evening as the sun was setting, curled up in a ball beneath the belly of a Skidder in order to escape the driving rain around him. The equipment was a necessity for him; shelter and the possibility of food when the workers were there.
It was a typical holiday season in Western North Carolina; rainy, wet and dreary. With the coming of Christmas and the New Year the project took an extended break. No more Cheetos, white bread crusts and Vienna Sausage juice. When it finally looked like there was no hope, I suppose he chose one direction and just began to walk. Mine is the first house you come to a mile down a country lane one mile from the highway. That’s where he found me. 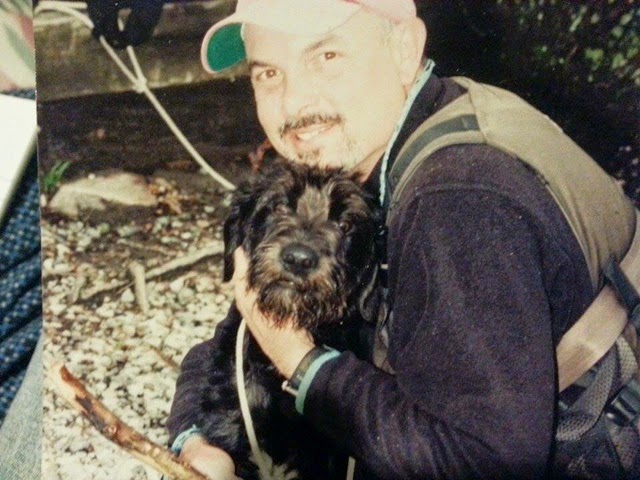 On January 1st, 2000 at 8am I sat sipping coffee at the dining room table, next to the back door. My head felt like a warm watermelon plugged with barley and yeast. I was staring out the window when I saw this little black puppy walking straight toward me. He wasn’t 10″ tall at the shoulder and not more than 10 pounds. His black fur was splattered with mud and grains of red sand, his little beard was bronze even then and the white star on his chest stood out brightly. He moved cautiously, with his head hung low, his eyes pleading up through bushy eyebrows. His tail was tucked tight under his rump, the tip vibrating against his belly. His knees and his hips were bent and ready to fall to the ground, defenseless, as his only means of defense.
I can’t repeat what I said, but it started with, “F-” and ended with, “-holes.” How could someone turn out and abandon such an animal? Then I moaned, “I can’t keep a dog!” It was easy to figure he hadn’t had any food for weeks. I had some dry dog food as I had been taking care of my sister’s dog and two cats for the winter. The kibbles were bigger than his nose. Never mind, he swallowed every chunk whole and in a minute the bowl was empty. He looked up, swallowed hard once more, then turned on the water bowl and emptied that too. He looked up at me with a thankful look in his eyes, his beard dripping and his tail wagging a little more freely. Then it happened, all that food and water crowded out the overcrowded worms in his body. What a pityful mess, this poor, mud spattered puppy!
I didn’t believe I could keep him, but I did everything I could for him. I fixed his worms and fleas; bathed and brushed him; provided a crate for him to sleep in; fed him and walked him first thing in the morning and after his meals. He got all his shots, was neutered and I even had an ID chip installed so that he might never be lost again. I tried to get him into a local No-Kill animal shelter, the only shelter for 50 miles in any direction, in order to find him a good home. I knew they always operated at full capacity and getting him in would be next to impossible. I was willing to list him and foster him until space or a home could be found. In the mean time the director offered to run a found dog ad in their weekly column in the local paper, in case he really was just lost. I gave a full physical description. When I was asked about his temperament, I lost it and blubbered, “Oh, he’s a good dog!” I checked, they never ran the ad. He quickly learned about eight or ten tricks, each command came with a distinct hand gesture. I thought this would be handy and he responded to either my voice or the signal. After the pressure of pleasing me subsided, I would give him a few biscuits, but I never wanted to associate tricks for treats. He did his tricks for me, not for biscuits. And, he still had no name.
Robert was one of my first choices. If he got a good home, no one would mind giving him a more dog like name of their own choosing. Who would imagine a dog named Robert anyway. I considered “Mr. Jingles” after the mouse in the movie “The Green Mile” (This accounts for the large steel jingle-bell/bear bell he wore his whole life – a present from our next door neighbors to replace the cheap ones that kept rusting and getting bent). Now, I like the blues and this dog had a bluesy story to tell. I was on a Zydeco and Creole kick at the time, both music and food. There is a picture of me at a crawfish boil with the heads and bodies mounted on my fingertips looking into the camera. That was it. This mud puppy became “Crawdad.” 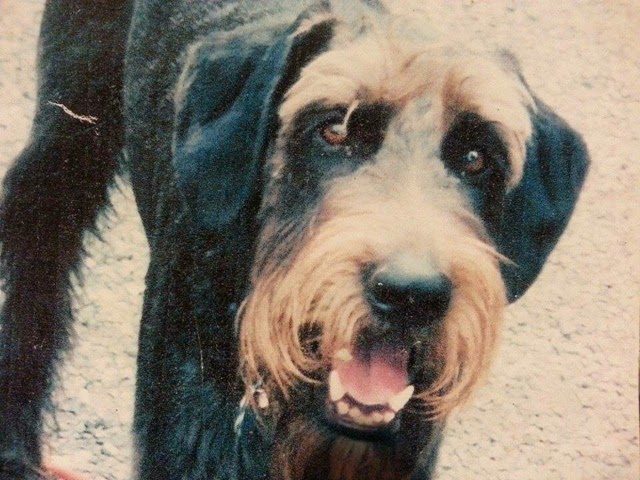 In the spring of that year I taught a few River Guide Training courses. He couldn’t come on the water with us, but waited in the car till I got a break and I could let him out for a walk. When we did land-based and rope skills training he was able to hang out with everyone and chase a stick or two. That summer I went to west Virginia to work on the New and Gauley Rivers and Crawdad went with me. We lived in an old RV and he would wait for me while I was on the water. I always hated to leave him alone inside the RV, but I trusted him and I had made a promise to myself that I would never tie a rope around his neck. One day, I was asked if I would like to row for the company’s over-night trips. I would love it! “But, who’s gonna take care of Crawdad?””We thought you would, you can take him with you if you want to.” Now, how cool was that? I found an old small/medium guest PFD and put it on him backwards. This put the floatation and buckles on his back, keeping him upright and down in the water so he could swim; the buckles were handy for lifting him out of the water. The collar of the jacket hung down on his chest when he was out of the water, and floated his chin when he was swimming. And, swim he did. When people would roll out of their Duckies in the flats, he couldn’t stand it. He had to jump in and go inform them that there was danger. He would swim toward every person in the water barking. He never pawed or touched anyone, but when he was sure they got the message he would turn to the next one and when everyone had been told he would return to our raft alongside the oar-lock where I could easily reach over and lift him up by the buckles and onto the deck. In camp he would run up and down the beach like a rocket and entertain the kids chasing sticks until they were all exhausted. At night he would sleep in my tent next to me; he was my swamper and I treated him well.
I always left camp on day two alone and fully loaded in order to get back to base, to de-rig, store the equipment and clean up the kitchen items and repack them for the next rip. This always made me a little nervous, to run the lower gorge alone, but it always kept me alert and on line. One morning after strapping down the load, ready to leave, I called to Crawdad to “Get Up.” He chose a spot on top of the gear net over the baggage in the front of the boat. I thought about this but decided what the heck, what difference does it make? Within site of camp we ran the ledge at Railroad Rapid. The water was high enough to make a good size hole and I stuffed the whole front of the boat with the dog on it into the mess. I had to snicker and chuckle as he tip-toed past me on the frame stepping over the oar-lock on his way to the back deck. “Whatever, I don’t blame ya, boy!”
When we got down to the Keeneys I started thinking about the possible result of being on the back deck as we ran some of the biggest standing waves on the river. I called him again and again to coax him onto the front deck. But the look from the corner of his eye looked pretty firm, “Unh-unh” was what they said. At Upper Keeneys I turned my back to the rapid to pull into the eddy behind “Whale Rock.” He took a big splash as we crossed the eddy-line. At that point I only had a half minute to convince him to move forward, if he was reluctant, we would take whatever we got. We were dropping into Middle Keeneys and there was no time to change. All went well, except near the bottom there lurks a pretty hefty pour-over that I would not fear running the edge of in a paddle raft. But, this is a heavy oar-rig and I don’t know what will happen. The current dragged us toward it and there was no escape, I had to line up and do what I could to soften the blow. BOOM, just out of the corner of my eye I saw an orange PFD with four black furry legs pointed to the sky go flying past the front of the boat. Damn, if he didn’t hit the water, orient himself to the current, beat it and swim to the oar-lock, where he was snatched from the water and unceremoniously tossed into the cockpit and remained there, clamped between my knees while we ran Lower Keeneys, the biggest of the three.
When we got to the pool above “Double Z”, we had time to relax. It was amazing, on any given day that time of year at mid afternoon there would be hundreds of boats all around us. We were alone. Crawdad was stretched out, napping on the front deck; the cliffs edge the rim of the gorge, dotted with climbers. I had to smile to myself. What a perfect moment. A river and a boat; a man and his dog. I don’t have a picture, but the image is burned into my mind and my heart forever.
He is the only thing that ever truly saved me from being entirely alone. Time after time. My Hero. Again and again. 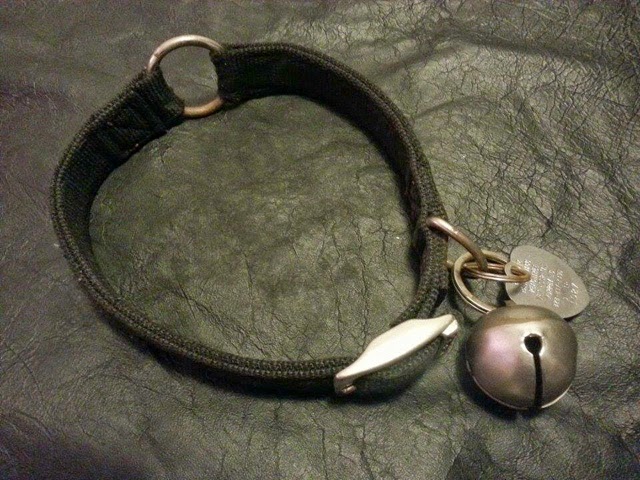 0 replies on “THE DAD by Taz Riggs”