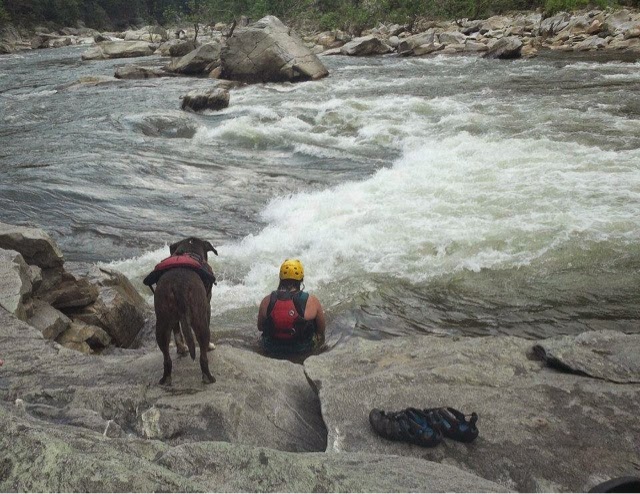 {Editor: Kassie was selected by popular vote as Dirt Bag Paddlers’ TOP DOG in our contest in February of this year (see the article from 3/6/15 TOP DOG – The Winners Profiled). Now her best friend Tye tells the crazy tail (wink wink) of one serious Class V pup! Some names have been changed to protect the guilty ~ Cheers!!}
PART ONE ~ Dirtbaggin’ Pup
I got Kassi in July of 2007, my 4th year working as a raft guide for USA Raft on the Pigeon River, and that year I got the entire riverside company camp site, “tent city,” all to myself. Another guide named JR approached me in the middle of the season and asked if I could keep his two litters of pitbull pups out at my camp site, and I said, “Sure, as long as I get to keep one of the dogs.” A few days later JR brought the dogs to camp. It was night time and raining when they showed up, and I had set up a tarp and a platform for the dogs earlier that day. When they arrived, JR informed me that all the pups were sick with parvovirus, a sickness that liquifies a puppy’s intestines so they can’t eat or drink. Parvovirus is very expensive to treat and in most cases it kills the entire litter of pups. The night before three of the puppies had died. JR told me he damn near went broke getting the medicine but he got it. I said to JR, “Let’s do it. Let’s save these dogs.” So that night under the tarp in the rain we game the puppies their medicine. We gave each pup a needle injection in their back between their shoulders and the treatment made their backs swell up like grapefruits. JR told me all the dogs’ names: CJ, Panda, Smoke, Ash, Snow Ball, Ruby Red… the mamma dog’s name was Lucy, and I can’t remember all the dogs’ names but I will never forget the first time I met Kassi.
JR handed me that pup and said, “This one is Kassi. She is the one I am most worried about. She might not make it through the night, she is the runt of the litter.” When I held her in my hands she had these tremor shakes every ten seconds, so I held her all night and she slept with me on my chest in my hammock. The next morning she was doing so much better. When I woke up and got to take a look at her in the daylight, she had white tips on her feet, nose, and tail and a little white stripe on the back of her neck, with a dark brown coat. I said to Kassi, “You have to be the prettiest puppy of em all.” 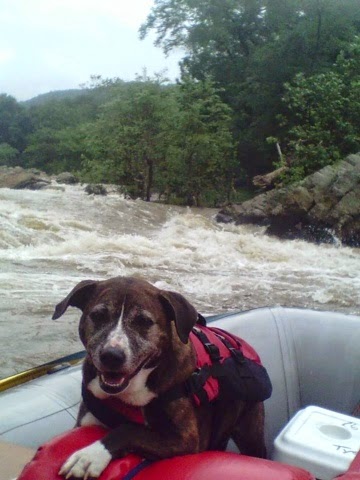 As she grew older that brown coat of hers turned brindle. She was the only pup who took after her mom Lucy, who was a grey brindle. All the pups made a full recovery. And every day when I got done with my raft trips the best part of my day was coming back to roll around with the pups. Kassi especially took a liking to me and boy did I have a soft spot for her. When it came time to start giving the dogs away I got first pick of the litter. JR told me I was the only person who could take one of his 3 favorite pups: CJ who took after his dad, Panda who was all spotty and unique looking, and Kassi, the only brindle and definitely the sweetest. There was no doubt in my mind. I knew Kassi was the dog for me. I got to pick her but really she picked me. 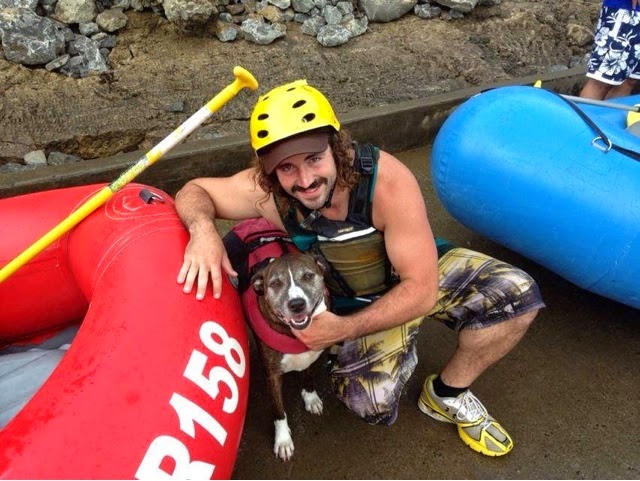 “The world is full of dumbasses, but that’s not going to keep my dog away from me”
The river I mainly worked at that time, the Pigeon, is a dam release river – good for river guides like me who like to play or work on the off days on other rivers. But at that time I was turning down my weekend French Broad and Nolichucky trips to hang out with the pups. Now the world is full of dumbasses and unfortunately you can’t turn your back for a second. I remember this day so clearly. It was an off day: I got up and hopped on my bike, headed for the little town of Hartford, but when I started down the road all 9 puppies came chasing after me. I turned around and said “Stop!” All the puppies stopped I said “Sit!” All the puppies sat down at once. Then I said “Get the hell back to the campsite!” And they all turned around and ran back to the camp site. Cutest thing I have ever seen in my life. Every puppy ran back with the exception of one. I said “Kassi that means you too. Get back to that camp site,” and Kassi did what I told her to do and went back to the camp. 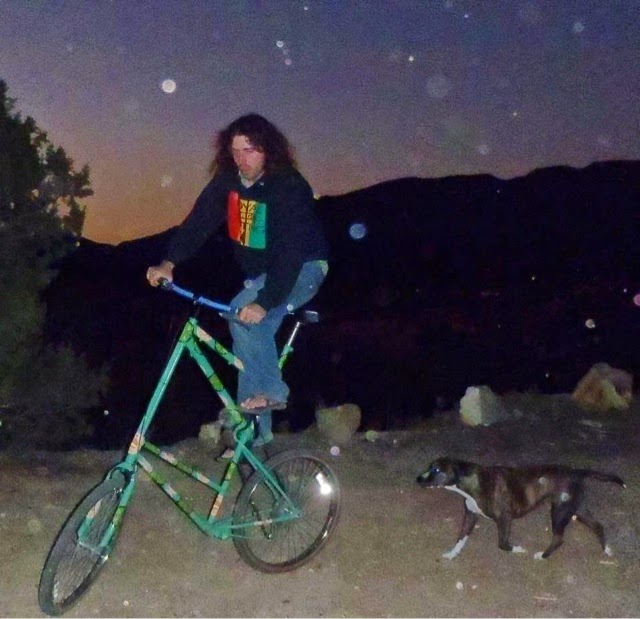 I rode into town, and as I did I passed some tubers waiting for their ride at the public takeout. I just waved at them, said hello and passed them on my bike, not thinking much of them at the time. I wasn’t gone longer than an hour before I returned to find four police cruisers and six of the nine puppies in the school house (aka USA Raft on Pigeon outpost). I got the story. After I passes those tubers apparently one puppy walked down the road, then turned around and went back to the camp site – I don’t know for certain but I’m pretty sure that puppy was Kassi. About six of these tubers entered my campsite with their pickup truck and start loading the puppies in the back of their truck, stealing my dogs. They later told the police they thought the dogs were being mistreated and were trying to help – bullshit, they were stealing my puppies. And little did they know how much money JR spent to save those dogs.  So JR shows up at my campsite and catches them in the act. By the way, this is hillbilly country, and if you know JR like I do you know he always carries a gun on him. JR has these kids lined up on their knees on the side of the river, getting them to pull out their driver’s licenses, saying, “I want to know your Christian names before I execute y’all right here on the side of the river.” JR put the dogs in his truck and as quickly as he could dropped six pups and mama dog at the school house, and took CJ, Panda, and Kassi and disappeared into the woods. And I didn’t see Kassi for two and a half months. 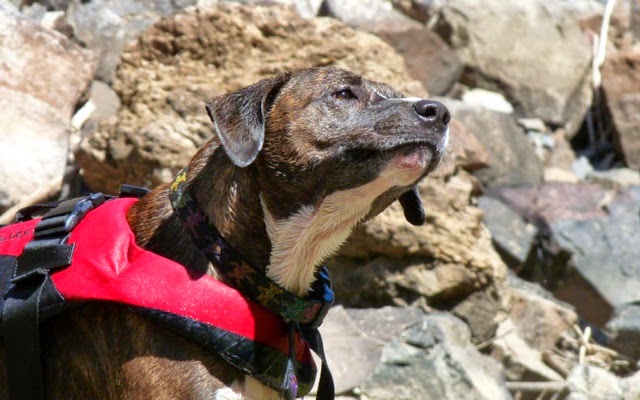 It was up to me to find homes for all the dogs, which I did. I left Tennessee for West Virginia and got checked out on the Lower and Upper Gauley. After the season I returned to Tennessee and picked up Kassi from JR, and we drove home to Mississippi in time to catch the big Halloween Bonfire bash, and little puppy Kassi never left my side. Since she was a little pup she has never needed a leash, and she loves to sit on my foot and stay right by my side.
So after a winter in Mississippi we returned to the Pigeon River. 2008 was a dry season so I didn’t stick around for long.  Before I left I took this raft guide chick I was seeing to get her checked out with my old buddies at USA on the French Broad, and while I was there I got the USA raft oar frame and a boat I borrowed from Rapid Decent (a great raft company on the Pigeon sadly no longer in existence), and I took Kassi down her first raft trip on Section 9 of the French Broad. She loved it! The Broad is a good medium level warm river, great for any dog to start out on. I took her down Section 9 three times, and once I took her down Section 11. After that we moved up to West Virginia to work the Lower New. I wanted to take her down the New that year, but I didn’t – she was just too young.
Funny side note about that season: I went down to New Orleans for a weekend to go to my cousin’s wedding and I left my dog with my girlfriend at the time. When I got back she told me she fooled around with some dude up in Maryland at the Upper Yough – Not something I wanted to hear. I was pretty pissed. She said she wanted to get that out of the way so we could still date. I ended up breaking up with her but she told me something that made the situation not so bad. She said that when she cheated on me with that guy, Kassi went and found the smelliest dead animal in Friendsville, rolled in it, then rolled all over the inside of my girlfriend’s car – then to top it off she pooped on the front seat. My girlfriend had to spend all weekend cleaning the car to get the stink out of the upholstery. I’ve never had any one stick up for me like that. That’s my dog, she’s got my back! 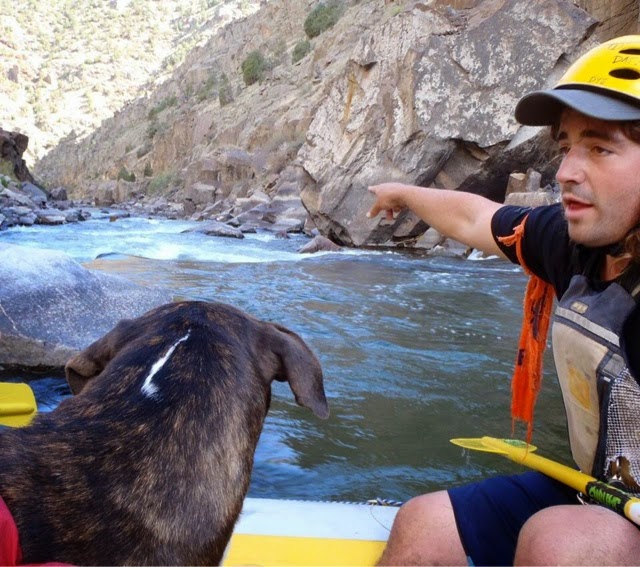 The next year, 2009, Kassi and I moved out west to Taos, New Mexico to take on the Rio Grand. Kassi started with and later got several more play trips on the Race Course section (super easy shuttle on that stretch by the way if you’ve never been out there). Once that summer Kassi and I canoed just down stream 5 miles from Taos County line to Embudo Station, a nice mellow canoe stretch. Then Kassi got to rock a trip down the Taos Box, a solid Class IV wilderness gorge. Also that summer I really got into river boogie board surfing. The Race Course has this awesome park and play surf spot called Sleeping Beauty. I would surf all day and Kassi would watch my back from the shore and chase me down the bank if I got washed downstream. Before we left for WestByGod Kassi and I took a trip down the stretch between the Box and Race Course, Taos Junction Bridge to Quartzite – 8 miles of flat water just to say we completed the stretch. So from John Dunn Bridge to Embudo Station Kassi has rocked 33 miles of the Rio Grande. 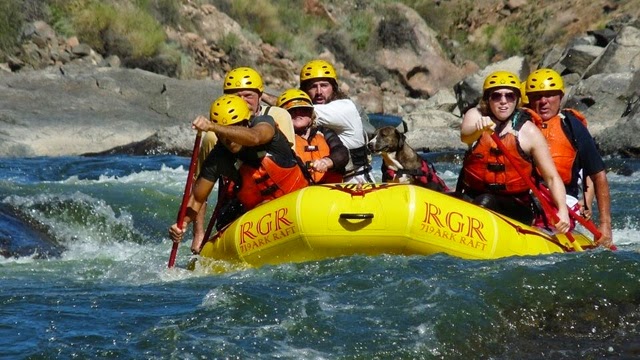 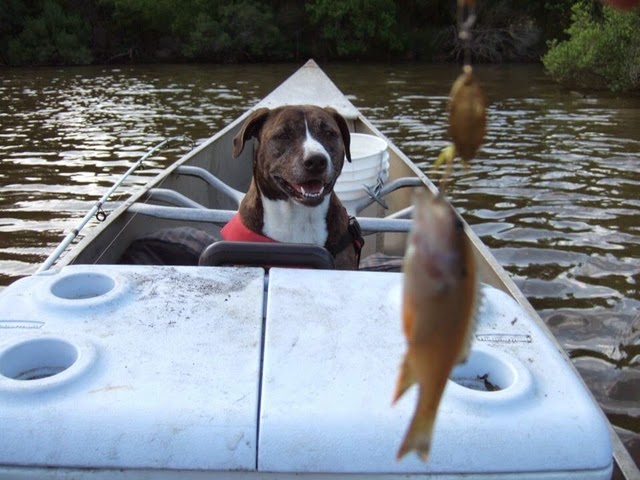 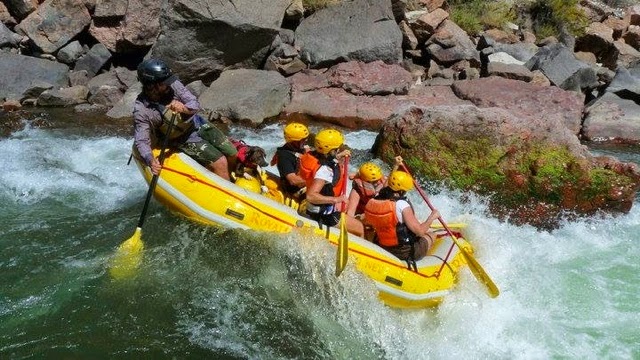