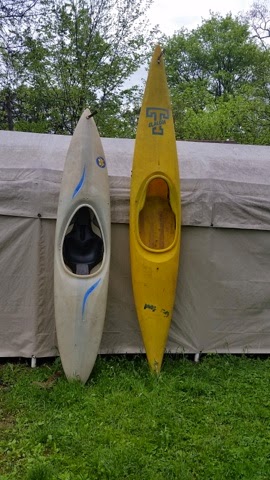 PART ONE
I started out my week as usual, having work that has to get done prior to any paddling. As Thursday rolled around I knew I would make my deadline and the trips I was planning for on Friday and Saturday. Nothing crazy was planned, actually just the opposite. I have a few friends that run beginner trips on the local class 2 runs, of which there are plenty within two hours of Knoxville. I decided to help on the two trips and so it was set.  Friday would be drills on the Little River and Saturday would be a novice trip on the Tuckaseegee. Now all I had to do was figure out what I was going to paddle.
I have wanted to paddle a boat I got from a neighbor a few years back, but it was void of most of its outfitting.  It’s a Prijon T-Slolam and from what I can guess and have been told, mid 80’s. Well, Amazon or Google can’t help with parts for this boat so it was up to the ingenuity of the Dirt Bag mind that I was forced to resort to. With my decision to paddle this craft set, I got to figuring out how to stay in it. I went to my Burn and looked for inspiration. I removed the foot pod and the attaching metal adjustment rails and with some convincing the parts went in and almost fit. After drilling a few larger holes it was done! I now have something to keep me from sliding up into the cavernous bow of the boat. Maybe it’s not so roomy, but plenty long.
With that issue resolved I went to the seat. Luckily, it was still there. But, that was it. No back band or anything else. Referring to pictures on the interweb did nothing to help my progression. Yes kids, sometimes you have to actually do it yourself. See not too long ago, do it yourself meant just that. Something you did yourself. You had a problem or need something and you figured out on your own or with a few friends. You solved the problem or made the needed object. We couldn’t turn to Pintack or Googles for answers. With my pre-webcentric thinking I went to the shop for answers. A little while later I emerged with a freshly cobbled back band out of some scrap Herculite and webbing. I was able to fashion something to keep me forward. Now that I could stay reasonably tight in the boat, I thought the class 2 runs on the Little would be an ideal proving ground for the vintage craft. 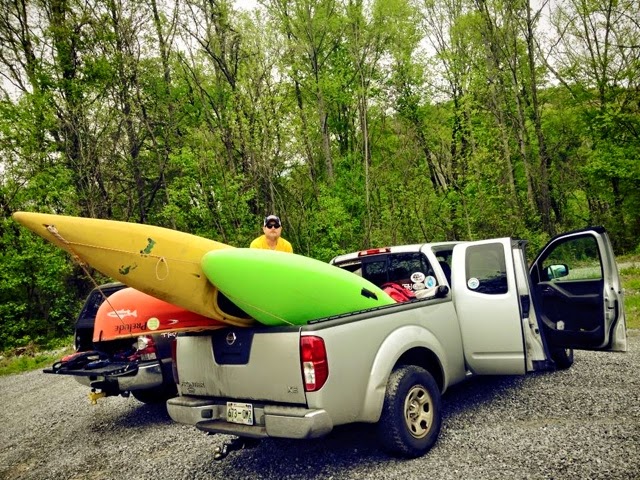 Friday came and I was headed to the put in for the late afternoon beginner trip on the Little River. Immediately upon arrival, barreling into the parking lot late, the looks began, then the questions. Then from the old timers, drool. I explained that, no, I didn’t have to get to 88 miles an hour hoping that this thing wouldn’t fly off the DeLorean; rather, I had been doing some yard work and spotted the tip of this boat sticking out of my neighbors’ bushes. I went to talk with them and they said I could have them. THEM!? I thought.  I bush whacked my way to the yellow point only to discover a small shed overgrown in everything that grows out here in east Tennessee. And the “them” I could have was the Prijon and a Noah Jetti. At the time I had no idea what I just received but now I do. With a little research I learned that the Jetti is the beginning of short boats and the father of all creak boats. We will save that for another day but remember to thank the amazing mind of Vladimir Vanha when you are enjoying that displacement hull and short length. {EDITOR: see the article on Vanha and the Jetti in DBP MAGAZINE ONLINE-12/25/14} I carried the boats from the spot they had been resting in for at least 2 decades. Out into the sun and up to their new home where they would get better storage and a chance at seeing some water again. 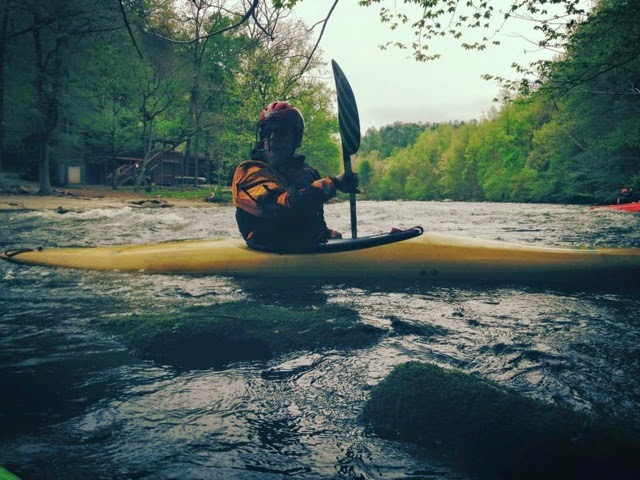 Today was the day for the Prijon and it did get noticed. I placed it on the shore and settled in. It’s a tight fit with no ratcheting or adjusting.  These boats were outfitted to the boater. You bought foam and glue and shaped the interior of the boat to accommodate you.  So when a boat was transferred to a new owner the process was started anew and that boater would shape and glue. I had the contact I felt comfortable with and slipped into the water. WOAH! That was different! This thing sits low and you really feel the water like nothing I have paddled before, which isn’t saying much but is was a new feeling. I also became aware that I didn’t forget to screw in my drain plug, because this boat doesn’t have one! I went through the first few rapids with ease and was enjoying the feel of the boat. The run was mostly uneventful but the things I learned from this boat were big. The major difference I see between this and the modern boats is the room for error. If I made a bad move or a good move I knew it immediately. The gap between the two was drawn closer. Though it was only class 2, I had to be alert and on top of things to keep this girl where I wanted her. By the end I felt the choice to take her out was a good one and one I will do more often. I never like the idea of committing to one style of boat when there are so many to experience. It is cool to think I can look forward to trying out the new as well as the old. I would recommend to anyone in the sport to consider getting out of your paddling rut and try something new, or old. You never know what you might learn. 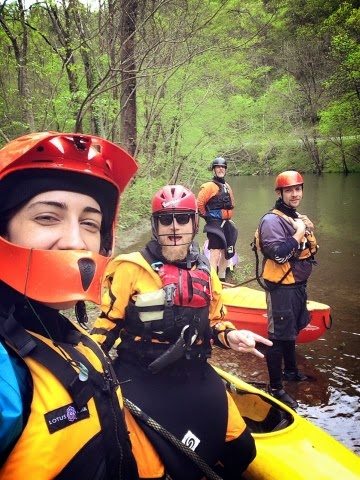 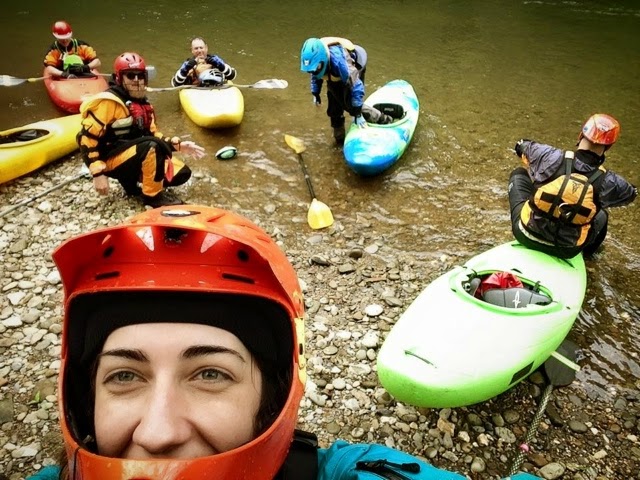 As we emerged at the takeout, discussions led to a trip on the Lower Conasauga River with Kirk Eddlemon. For the few who may not know who Kirk is, let’s just say he is the definitive resource on paddling in the southeast. So knowledgeable about the area in fact that he decided to write a book containing all the information he had gathered on it. The book was so massive they had to make 2 volumes. This is not just a paddling guide book but a comprehensive guide book with information on geology, topography, meteorology and a few other -ologies. Just go get a set for yourself or someone you love! We’ll have more on him one day as well. 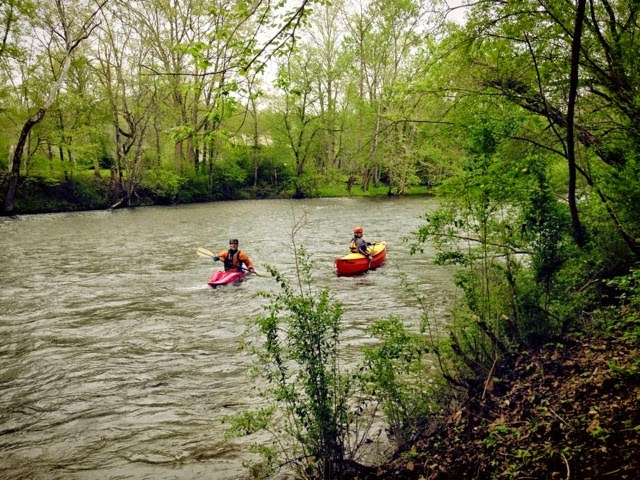 The Conasauga is a beautiful river I had never heard of and it peaked my interest. It runs along the Tennessee/Georgia border and is rain dependent. Being that we are in no short supply of precipitation the flow would be right. I had committed however to another trip on the Tuck, but the Tuck always runs. I contacted the TL and explained the situation. He agreed that it would be a better run, but because the short notice and the size of the group he had, he said we would go ahead with his plans but for me to go for the Conasauga. We have done quite a few trips together and I knew he would tell me if he really needed me. 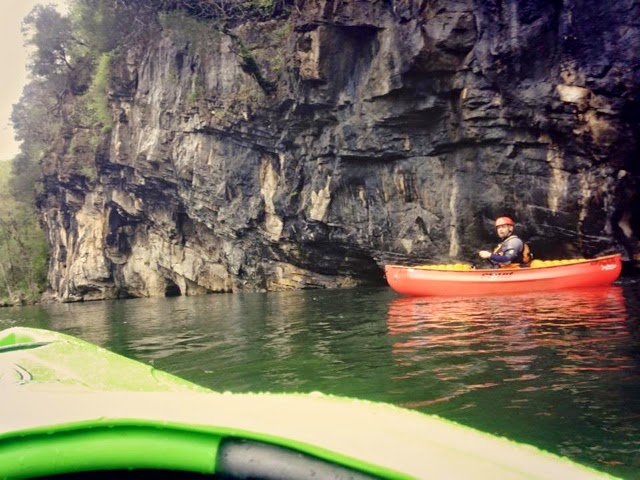 I returned home later that evening to do my research on the river. I enjoy learning about areas I paddle as much as I enjoy the rivers themselves. There was not much at all to be found out about this section. Only that there is some stout creeking in the upper sections, flow permitting. I contacted some other paddlers on the trip to nail down a meet up point. After some time I had the info I needed and the plan was in motion. Tomorrow I would be paddling something new that I had only heard of just a few hours before. I love serendipity and I try to never fight it.
To Be Continued…………
Kirk Eddlemon’s home page (you can order his book here!)
http://www.wwsouthernapps.com/about/
Kirk Eddlemon discusses SE whitewater:
https://m.youtube.com/watch?v=5LUNAICYVD0 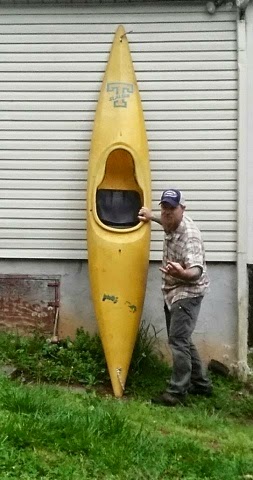