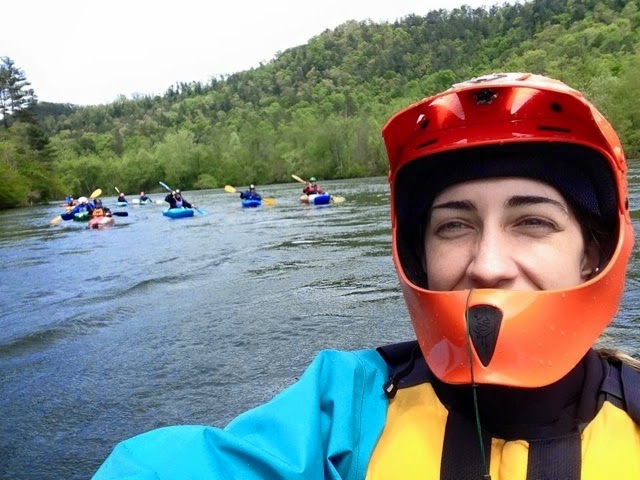 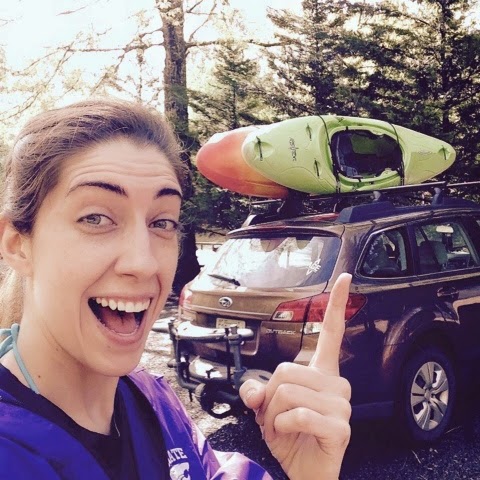 So over the past nine months of getting my “boater chick” on it’s been fairly entertaining to sit back as a newbie and listen to all of the “knowledge” veteran boaters could dole out…especially from the men. Particularly their eagerness to teach me everything from what a “piton” or “boof” was, to the different local rivers to paddle (and don’t forget what order to hit them in!), the “best” way to camp, or even the whole brown claw thing. I must say the most interesting bit of insight I got was sitting around with the fellas and a kick-ass lady boater, La Dawn Wolfe, and the topic of rating women came about.
Apparently there is a curve that every woman is rated on, yet once she becomes a paddler she earns an extra 2 points of hottttt-ness! A girl that is a 4 on the street automatically becomes a 6 if she boats. If she’s a 7 on the hot scale, then look out! That chick is now a 9 if she’s in a boat! And, no, I dared not ask what we were, or why with this boating handicap they were accounting for the scale only went to 10. Especially since I’d say most girls are above a 5…haha, but then again maybe I’m wrong since I don’t swing for that team.
So, anyway, this got me thinking, as I looked around our crew, that I really am surrounded be dudes all the time in kayaking. Then I wondered, what would a weekend without the fellas
be like? Don’t get me wrong they are all wonderful, but seriously, I was betting it would be a completely different experience. 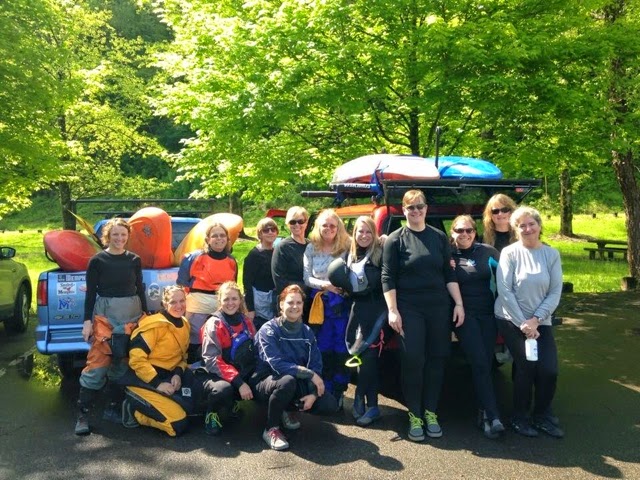 Fast forward a few months and I would get my chance to find out as TVCC (Chattanooga’s paddling club) and Chota Canoe Club (Knoxville’s paddling club) setup a Women of Whitewater weekend on the river and camping at OAR Campground by the Ocoee.
Well, the weekend had finally arrived, and stoked that the water and air temp had finally warmed up enough to possibly brave a swim, I stole the keys to my dad’s mountaineer, packed my gear up, loaded the cooler, and after a very unproductive day of work I set course for OAR before nightfall. Yeeeaaah…that didn’t happen. After missing the turn into the campground 2x I finally found it, staked out a campsite, grabbed my headlamp and a full Pint Night glass, and like a moth to a flame went in search of “our people”. Come to find out I was the only one from either club to show up Friday night. But making friends with the silhouettes of some newb raft guides and watching the fire die wasn’t half bad! To be honest the best part of the evening was realizing that my camping in the truck plan was stellar…no bugs, non humidity, just the sound of mother nature dumping buckets of rain on the car.
Saturday morning came round and as “our people” finally started to roll in I knew it was going to be a good day!
First off, this dirtbag found out that camp was FREE for the weekend! Then Ashley Teel brought me non-instant coffee (can I get a hallelujah?!?!) and finally we were going back to a river I knew we all could enjoy…the good ole Hiwassee! 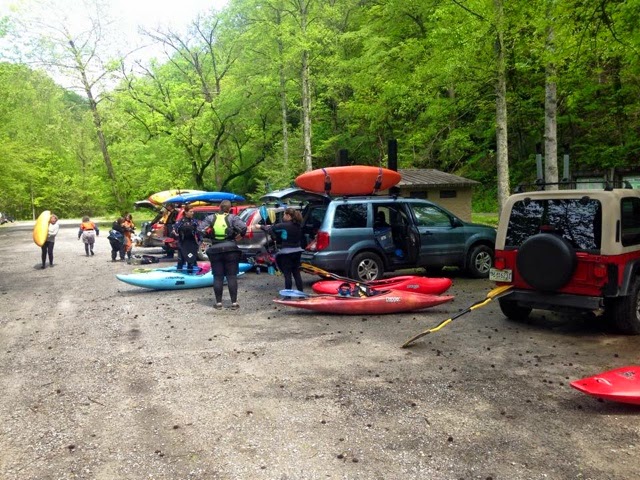 18 Boats loaded and chicks crammed into shuttle cars later, and we made it to the put in. At this point I’m laughing because I was scared to freakin death of whitewater on my first day at paddle school last June, and now this river is so small to me! This was to be my 12th river run, and 5th since getting a facial from 3 second rock (Lesser Wesser) on Labor Day…for those of you who saw my face on the internet and wonder if that chick still boats. Um….yes. 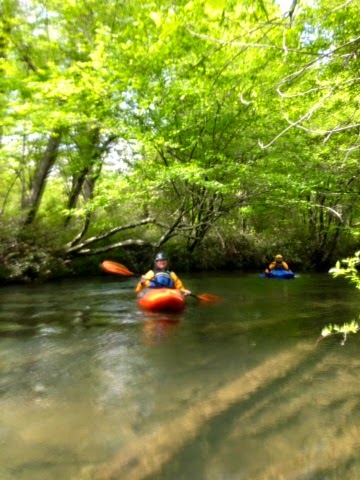 Come to find out many of us began our kayaking careers on this river. You just can’t be a the Hiwassee as a place to make memories…first swims, all the different kinds of fisherman with all their little gadgets, swimming Devil Shoals after running it, or the ceremonial jump off the train trestle. Now, though, one of the most enjoyable trips down this river was with a group of women who were ready to cheer anyone on and pump you up! Seriously, if any of us were doubting our boating skills for the season that rust was knocked off right there at the put in! 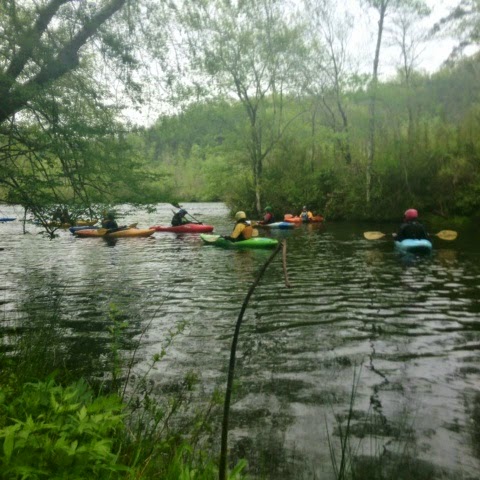 Take Kristin Evans for example, she got her Jackson Karma sucked into a ledge for a nice side surf, but when things got knarly and she was sculling like a champ and swam there were no sarcastic bro comments to be had! Oh, and we could pick our own lines! Every girl in a boat has been told this by a dude…”just follow me”. But not this day. Same thing with a little roll session in Pee Creek. Although admittedly I used the creek for its namesake. It was a relief to know we could go surf, play, attain, practice a combat roll or two and not feel like you had to follow the direction of anyone…just have fun!
Now, I said there were no dudes on this trip, but in all honesty we had one dirtbag daddy, Aaron Hiscock, bring his dirtbag baby girl, Teagan, 14, to paddle with us. You might say he was like a seahorse…he cared for his young but let her play with her friends and kept his distance. The vibe was so chill out there we even forgot he was around until he nearly swam a few times. (FYI- take a note from Aaron. If you want to know what it feels like to be a beginner again, get an open boat) 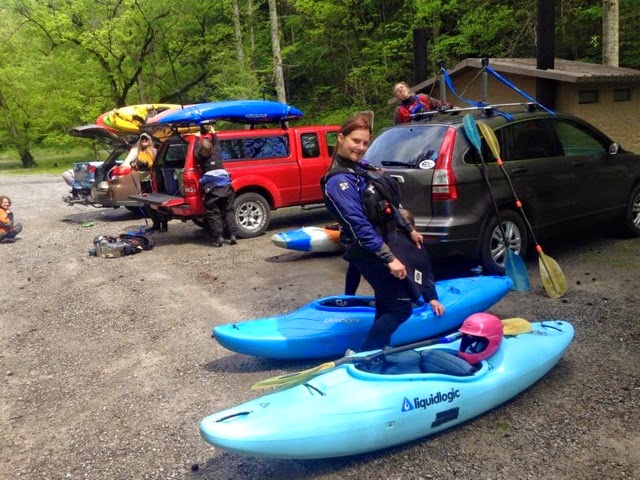 Fast Forward to the takeout, and the party began right there on the tarmac. Fresh baked cookies, an impromptu safety meeting, a game of slap the bag, and plenty of women changing clothes like the takeout lot was a women’s locker room…it was the beginning of a good night! Oh, and if I was a dude, I would have been very jealous of how much fun was missed! 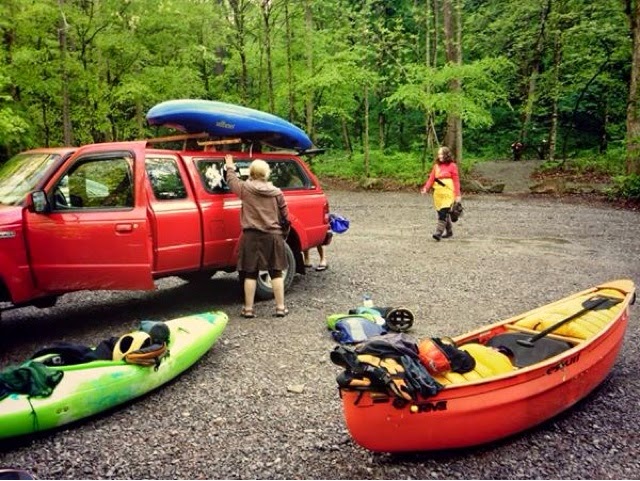 Back at camp everyone broke out their scraps and slugged through the mud provided by the torrential downpour the night prior to find that Alex Vargas was making us Tacos (you have no idea what you are missing people!!!) and Ryan Glasser was ready to grill for us! After a quick, and very eventful, trip to the store (my apologies to the clerk for my hilariously lit passengers…but at least you got a laugh) my cronies and I got back and Terra McGill was ready to make Kristin shotgun a beer for the swim. In all the excitement though she tore a freakin 3″ gash in the can and wondered why it wasn’t going the way she planned. Add my stereo, and the 6 cases of social lubricant (that’s for you Terra) we brought back the party was alive!
By the way, I did hear a keen insight made by one of the ladies, “Does anyone else realize all of the guys we had on the river or cooking for us were open boaters? They are so chill. Hard boaters would just want to know what rivers we paddled and then eat our food! Forget cooking for us!” True story.
As the fire, and my phone, died down and everyone made their way back to camp, or to another “meeting” the plan was finally set to send the class III+ girls to the Ocoee and the rest of us would head down to the Lower Conasauga. 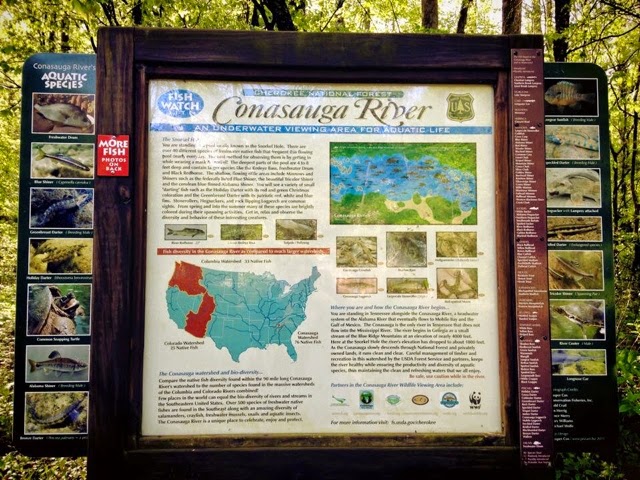 The previous weekend I’d paddled the Lower Conasauga guided by Kirk Eddlemon, so Aaron and I figured even with the water much lower this free flow river isn’t one to pass by if we could run it again. This time it would be Teagan Hiscock, Carrie Callaway, Aaron Hiscock, and myself from Chota, along with three TVCC ladies who’s name I cannot remember…I feel like a jerk. Anyway, we paddled the river and just enjoyed the views. It was so very peaceful. It was reminiscent of backcountry paddling. We had only maybe one swimmer, but all in all a good day and it was mostly a sightseeing trip. 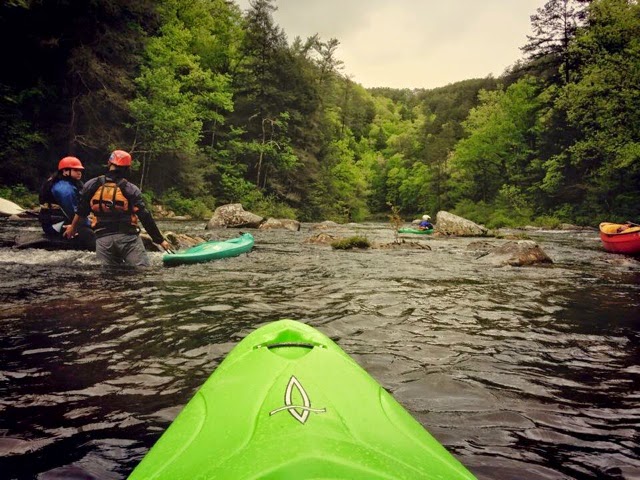 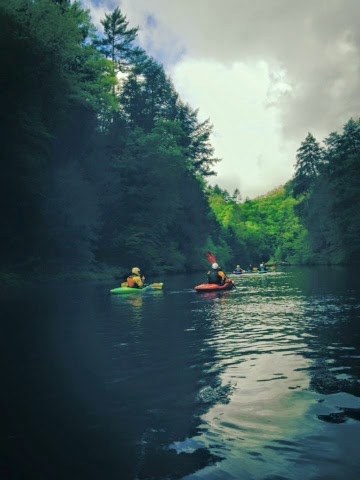 When it finally came to an end we hiked out with our boats and I laced up my running shoes for my next workout…getting our shuttle car. “It’s just a half mile away” Aaron said. SCREW THAT. I’m telling you, the whole “as the crow flies” thing applies here! It felt like I was running the dragon! Every turn I’d pray the car was there…and it wasn’t. All I could think is “They are waiting on my slow rear to fetch this car and I’m not going to be “that girl” and waste everyone’s time.” Haha! Dripping with sweat I finally reached the car. We grabbed drivers and brought back all the vehicles for our final weekend farewells. 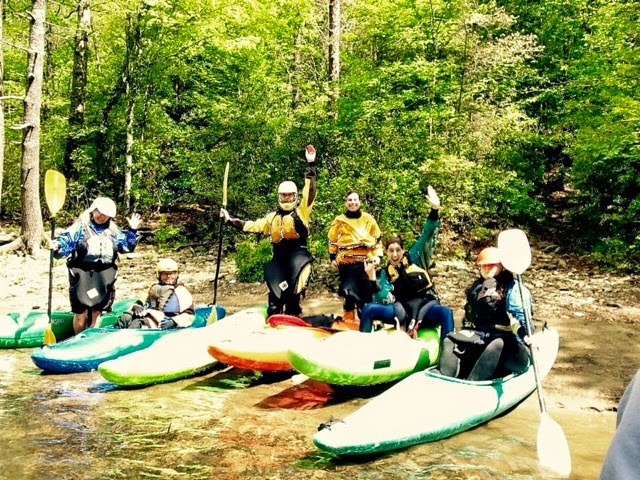 Word on the street is that a few of the girls who went to the Ocoee let some guys be honorary Women of Whitewater for the day. It could be a farce, but we all know they guys just want to be one of us. If I had a dollar for every time I heard a guy say, “I wish I had boobs!” ….I won’t even go there. You know what I’m getting at.
So thanks to all of WoW (as Terra and Julie coined us!) for coming out to have a great weekend without the fellas! It was so much fun and we’ll have to get on the river together soon! 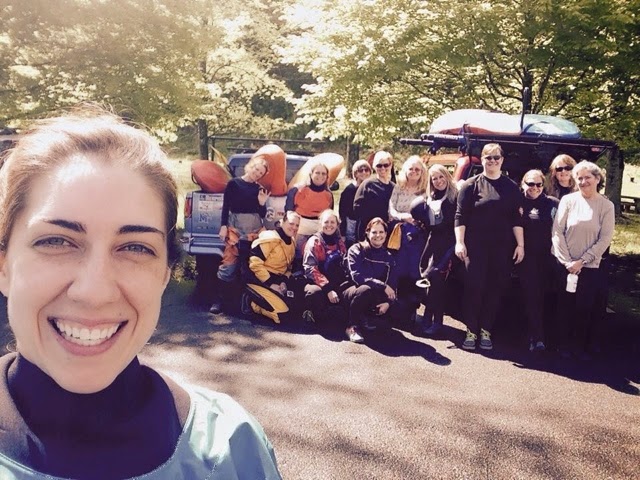 0 replies on “A WEEKEND OF WOW! By Rachel Elise”