Skip to the content
The Dirt Bag Paddlers Wisconsin Chapter is hosting a raft and kayak surf and race competition, and a huge barn party with DJ Pocket Fuzz, raft rastlin’, and free camping, on the Piers Gorge section of the Menominee River near Niagra, WI the last weekend of July. In honor of one of our close buddies who left us way too early, we call this giant Dirtbaggin’ party “Frank Fest.” This is the second year we’ve hosted it. We will be releasing more info to come on prizes, sponsors etc on our Facebook Page (in the Events section). We invite dirtbags from all over to come enjoy our Class IV classic, and if we get lucky we can show off some of the many other local treats to our guests and friends, depending on weather and levels.
But this isn’t why I’m writing today. This article is to tell you a bit about the man behind the party, Mr. Frank Sade.

Frank passed away suddenly and tragically in November 2013. He had just returned home to the Upper Peninsula of Michigan from an epic high water Gauley Season in West Virginia. He had been guiding with ACE, where he had become friends with another rookie, Kelly Gladen (who has been a friend of ours and another DBP Admin since that time). While in West By God Frank had camped along the cliffs of Summersville Lake, slinging up his hammock right on the edge, enjoying the beauty and freedom of no rent and epic vistas. When he returned home, used to the good life out East, he decided to go to the scenic shores of Lake Superior near Munising, MI and do some outlaw camping with a friend. It was cold, and the boys were in wet suits trying to stay warm in the 30 degree temps overnight. When the fire died, Frank got up to fetch wood. For some reason he didn’t have himself tethered like he did in West Virginia, and he slipped off the high cliff. He passed away from his injuries. He is sorely missed. 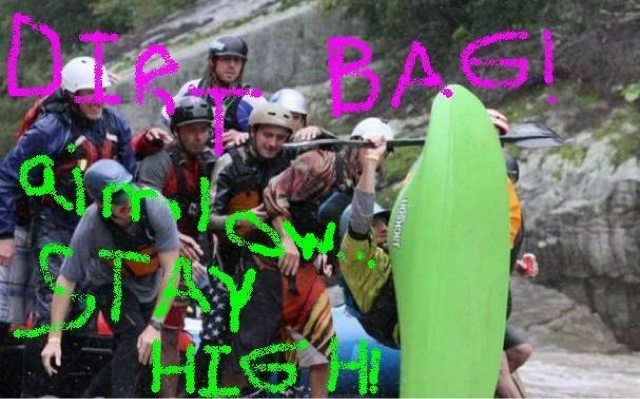 Frank was the most dirtbag paddler I’ve ever met. He had come out to Gauley Fest with the WIsco DBP crew, as one of our original Admins and best friends. The first day we ran with an experienced friend in his boat, and Wallaced in Iron Ring running around 7500 cfs. Our buddy Amy Van Eerden, another Admin, swam (her first ever major whitewater swim!) through on Frank’s shoulders, earning her the sobriquet “Backpack Amy.” I’ll never forget the next day, when we borrowed that raft to run down the Upper. Frank wanted to captain, only having seen the river once the day before. He cleaned it. Day Three we did a late day run on the Lower, pushing about 6500 cfs, when again we Wallaced, this time into the teeth of a very angry Heaven’s Gates. Frank got stuck in an undercut, and came through a changed man. The look on his face, coming so close to death, is seared in my mind. 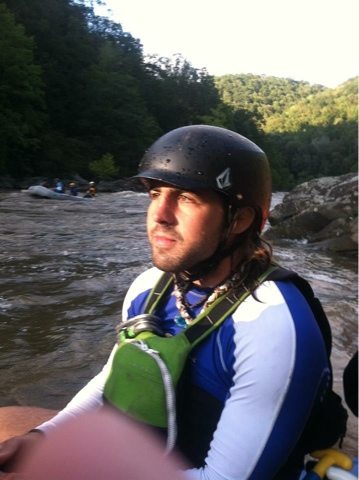 Frank always lived life full tilt boogie. As soon as we got back to Wisconsin, he packed up and thumbed a ride back east. He couldn’t bear the thought of missing out on the epic levels. He got dropped off in the worst part of Milwaukee, determined to make his broke ass all the way to Summersville. The first person to give Frank a ride went way past where he was originally going, and as Frank got out to leave, this guy hands him a lighter. Wrapped around the lighter was a couple hundred dollars! Frank bought a bus ticket and some beer, hooked up a job at ACE, and the rest is history. Never was there a more dirtbag story than that!

Frank loved rafting. I mean he LOVED IT!! He loved thrilling his customers, and entertaining them. He would drive the beat up van through the parking lot at the Menominee River Outpost Hooting and hollering to fire up the waiting custies. He would get his crew doing funny chants, and get the whole bus yelling on the way to and from the put in. He would run Piers Gorge backwards, or surf on the Island Wave, and he constantly went for broke in the terrific surf of Terminal Rapid. Many were the times he got boats stuck in the hole, to the chagrin of his boss. Once he was tumbled so hard swimming that his trunks were Wallaced clean off. He showed up at the door of local dirtbag Nate Alwine sans trunks after hiking the twenty minutes up out of the Gorge.
Frank also loved the nightlife of being a true dirtbag rubber pusher. He’d play a small hand drum with Jason Flannery (one of the three Original Dirtbag Admins) on guitar, going around the campfires to entertain and party with any willing customers at our private campground. Those two would always find some female companions for the weekend. If nothing was doing, they would sit on the front porch of the raft company bar, Rapids Resort, and play till two in the morning. Then Frank would beat on the drum set set up on the porch of the guide shack until one of us would finally tell him to go to bed already! He was a terrific looking guy too, with an easy smile, deep tan, rippling muscles and physique of a wrestler (which he had been in college), and the wild hippy hair of a dirtbag paddler. The women all listed for him. Every man thought of him as a friend.

Life was easy for Frank Sade. He struggled through his rough spots, the poverty of Dirtbagging, the down days when things just didn’t feel right, but in the end he was a beacon of light that fired up everyone around him. He was the life of the party. He had great schemes and the balls to pull them off. In just his second year of boating he had graduated to working the New River, and had a gig lined up in Colorado for the following year after spending the Spring with us at Kosir’s. That was the plan. He seemed to be unstoppable, with endless energy, easy strength, quick effortless affability. Frank was the shit. Writing this, and looking back, I realize how much we all miss him… 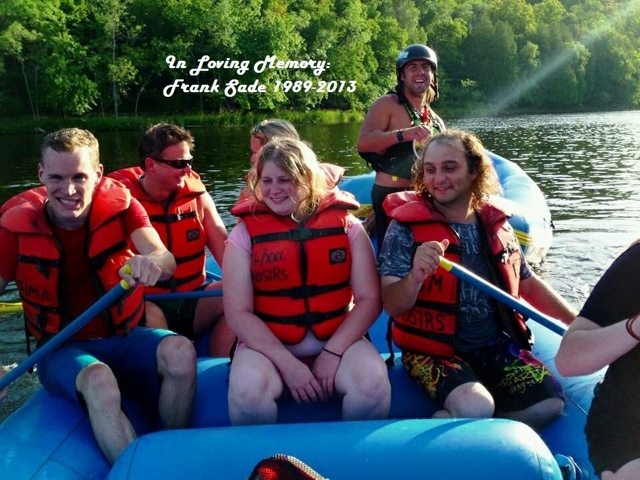 And so we fire up Frank Fest in his memory. Frank would have loved it, partying down at the Barn where he lived most of the summer, paddling the Gorge that was his solace. The surfing especially, deep down in his favorite hole on his favorite river. Yeah, he probably would have cleaned up the competition in raft rastlin’ too.
Please come up to the Menom and help us honor our friend. It would be a pleasure to host you! 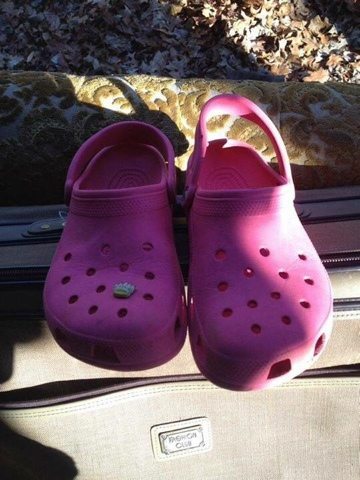 3 replies on “BEHIND FRANK FEST: a story of a true dirtbag, Frank Sade. byChicagoToughill”

paddle in paradise brother!!! did not know Frank but paddled the same water in West By God as he did..God takes the good ones to keep Heaven awesome!!! hope to see ya'll at the end of July!!!

Even though I have read this article many times I always come back to it and this time I thought I would leave a comment. Rafting with Frank was one of the most memorable trips of my life. I will never forget the summer my friends and I rafted with him. It was August of 2013 and my friends and I all drove down from Chicago to camp at Kosir’s and go rafting and sure enough just as you mentioned in the article he came around our campsite banging his drum around midnight and we all quickly became friends. Even though we had only just met Frank we loved him and sure enough requested him as our guide the next day. I’m glad we did because we had the greatest time on the river with him and it’s something I will never forget. On the bus he was chanting and cheering all the way to the outpost to get us all excited and our raft was chanting the entire way down the river. Somehow I think it was all meant to be. On our way up to Wisconsin there was a semi truck flipped over on the highway which delayed us for almost 2-3 hours. After that we got completely lost in the middle of Wisconsin somewhere because our GPS didn’t like Wisconsin roads. After we finally made it to the campsite it was super late at night and we were struggling to set up our tent in the pitch dark with only our car headlights. If it weren’t for all those crazy things we might never have gotten to the campsite so late and we might have never met Frank. After his death I posted a tribute video for him to my YouTube channel and not long after I received a message from Franks mother. Ever since then I have kept in touch with Frank’s parents once in a while and we have even written letters to each other. It’s weird how much impact one person can bring to someone’s life who they only knew for two days. Frank was an amazing person and I think about that summer and our time spent with him very often. Especially now with his birthday just around the corner. He will never be forgotten.