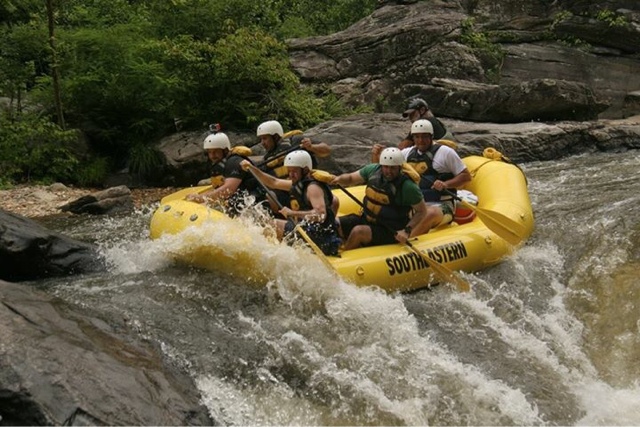 I really didn’t have any expectations about my return. It’s not like I could have forgotten how to guide. Though as anyone who has worked there will tell you, it’s much more than memorizing routes. The question is: can you remember rocks that can’t be seen, little moves that defy common sense and practice, and an acceptance that sometimes the long way around is the short way through. I never really saw what I would call high water, so the greatest skill I ever learned came into play a lot; the skill to sell the river as it is. The watershed is relatively small and there is no hydro-electric project providing water from upstream. I avoid the word low and instead use the word natural, as it’s simply natural for it to rain less in summer. There are wide and shallow places that could frustrate the Pope if he was a guide, but time and again where the river narrows down, the rapid classifications do not go down with the water. Where danger disappears, sheer difficulty of execution prevails. And if something should happen to get any easier, the penalty for missing your move gets a little more blunt.
I’m not generally one for statistics, but I do keep a river log. Always something curious in the tallies. I swam twice in my first four trips. Once at the bottom of Seven Foot Falls and once at the bottom of Sock-em-Dog. A swim every now and then is no surprise. Last year I had over 170 trips on another river and never got my hair wet except when I wanted. I really didn’t care, but I wondered if anyone else noticed. No problem, just a little adjustment on the saddle and I was good to go for quite a while. 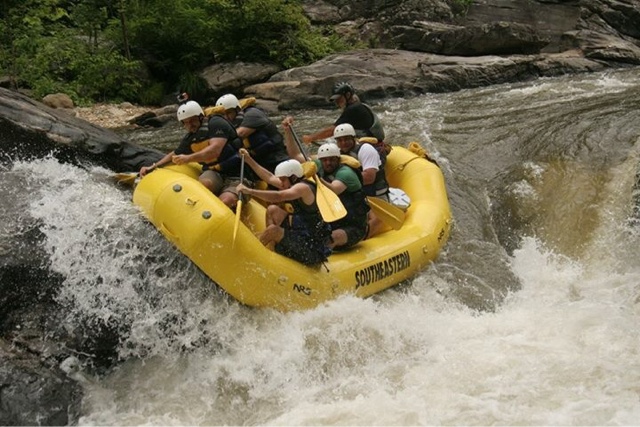 For the next five weeks I stayed the boat, even executing three “Perfect Runs” at Seven Foot (cleaning the boat of passengers with the exception of the guide). I did take a swim one day while portaging my raft over the rocks at Crack In the Rock. I slipped and fell about ten feet, head first, still holding my raft. Just clipped my shoulder and elbow as I hit the water, and according to those that saw it, it was pretty amazing that it wasn’t worse. Things did stay pretty smooth through the bulk of the summer.
Then, on the last day of July, dues came up. A Flop and a Flip, in the same day. They were big, for real. You see the pictures at Seven Foot, it looks like everyone was sucked out of the raft by a Black Hole that was pierced by the first guy to go out. The raft landed upright saving me from a full flip, just a mere Dump-Truck. We spent more than the usual amount of time stuck. It wasn’t that they were just heavy, it was hard for them to move about the raft and shifting all our weight to one side, to pass through narrow slots, was not working so good. The guys knew I had been hauling, pushing, grunting and slipping on rocks; they were determined to make good. The Five Falls becomes the final exam and everybody wants to pass. Just to start Entrance Rapid you have to slip one of these slots to start your run. Well, they were pumped; they did so good the good just kept on coming, all the way over on top of us. In ten inches of water. Crawl to shore! Crawl to shore! 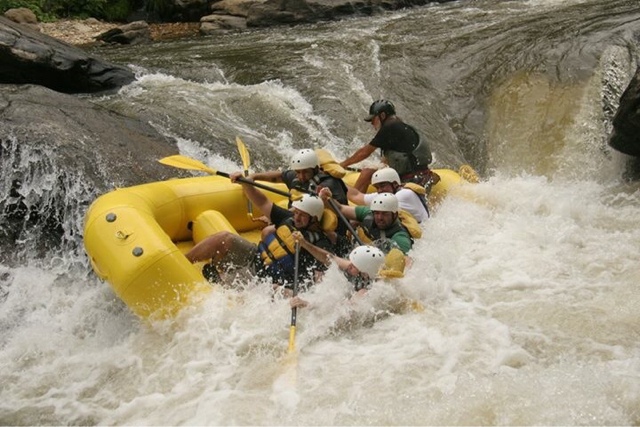 Four weeks passed till my next incident of note. Caught in the fence of rocks at the base of Entrance I fell over the side as the boat was wedged. I didn’t wait to make a plan but instead followed the light and the bubbles for a fast forceful and deep flush out. There was one other flip, but I never saw it. Entrance had my number this year. Stuck broadside five feet above the middle drop, I got out, had the crew get down in a squat and gave it a good nudge, and jumped into the floor in a fetal position and watch the whole mess spiral around me as the boat slipped upside down out onto the Finger, dumping all the contents. 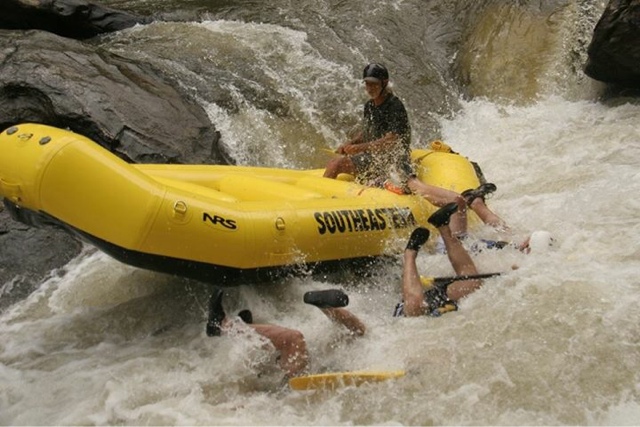 My shoulders and my lower back stay sore all the time and I attribute it to the carry to and from the river more than any one other thing. I think of the tens of thousands of people who have walked this trail before us for the same purpose. So, it’s kind of an historical walk. Let’s just try not to make it a reenactment of the Trail of Tears. Really though, if it were any easier to get to the water people just would. And leave their busted Styrofoam cooler, empty beverage containers, and other nasty things I don’t need to mention. The quarter mile corridor does a fairly effective job of keeping the undesirables out. The walk in and the two mile paddle across the lake after a section IV run, combined with the typical summer flows, keep the hoards of novices from trying their hand in mid season. In spite of the aches, I’m glad for the walk in. 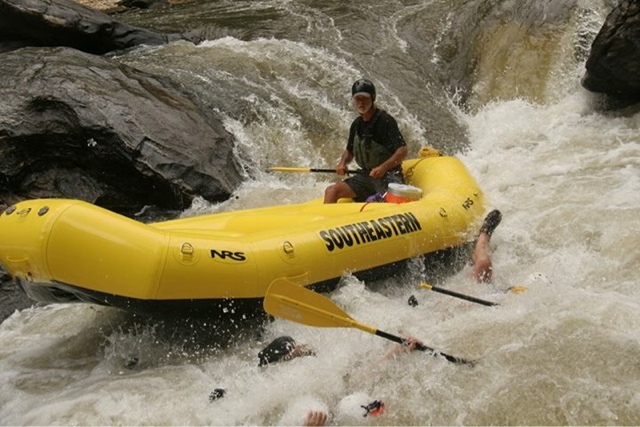 Oh, I got a list of bruises, scrapes, rubs and scratches, most I can’t remember where they came from. There is never any time to worry about it out there. You shake it off and if you can ignore it enough to get up and go, you can probably wipe out the memory of what happened too. Wow! Look at the size of that bruise! I wonder what did that!?! I remember spraining my thumb trying to keep my raft from pushing a lady’s face into a rock. It worked; I’ve got two thumbs, she only had one face. Looked like it was worth the effort; my thumb’s not too happy, my heart thinks I’m a hero.
It took me a couple of weeks to figure out why my little fingers on both hands were sore. Then I figured it out: it was all the pulling, yanking, lifting, pushing the rafts by their steel d-rings or handles and straps to try and move them while they are full of people. I went through a period where my butt cheeks were just plain raw. When you sit and squirm about on hard rubber, in wet shorts for six hours a day, six days a week, you learn to take care of your ass. I think I would rather set my ass on fire than to stand on my feet for twelve hours in a factory. (Matches, please.)
I love my guests. Even when they aren’t thinking, they get me thinking. “So, how do they get all the sand in for the beaches?” Silly question? Not if you think about it. We have almost stopped the natural flow of sand and silt on our waterways. The reservoirs act as filters to prevent the building and rebuilding of beaches and sand bars; we just don’t get to experience them any more. The sand along the Chattooga is very coarse, not like the fine sand of ocean beaches, almost a fine gravel. It’s made up of the same rocks and minerals that they flow over. Some of the oldest and hardest metamorphic rocks, crystals, gems and basic components that through a microscope looks sadistically sharp and jagged as broken glass. A day or two of walking in this sand causes the average person no problems, it’s the long term effects that build up. Ignore that one uncomfortable grain of sand for a couple of hours and you will have a tiny little raw spot right next to the ones from yesterday that hadn’t healed yet. Learn to respect the power of a grain of sand. Walk at the edge of the water where the sand is hard, rinse your feet before stepping on rocks, avoid rocks that have a scattering of sand on them. Clean and dry your feet as fast as you can. If you do that you can appreciate when the stars come down and dance in the sunlight on the beaches. 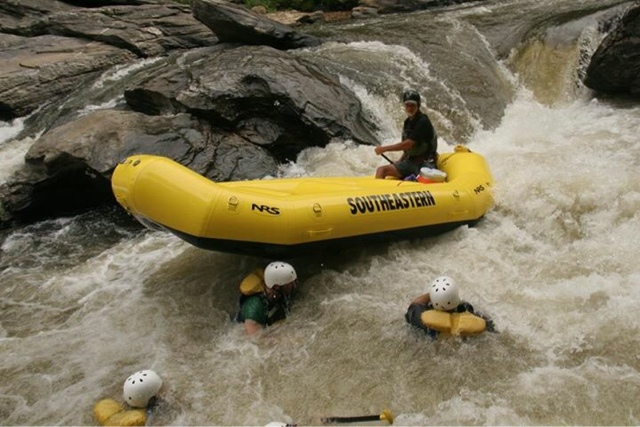 My apologies to those who might have felt slighted because I didn’t stay in touch. No signal. Can you imagine that; a place where the outside world can’t get in. I missed you, not the internet. Come visit me and my “Mother.”