As a kayaker, jokes about swimming are relentless. Swimming is a last resort when it all goes wrong, to pop your spray deck and bail out of the boat, like a downed fighter pilot. To swim means that the river got the better of you, that you weren’t good enough and had to admit defeat. But it’s a natural part of the learning curve. Without falling down, we’d never learn to walk.

Learning to successfully master the Eskimo roll and to be able to re-right your boat should you need to often marks the end of the constant swimming phase of a paddler’s white water career. Swims happen less as your skill level increases and with this comes a change in attitude. As an accomplished paddler, you know that your friends will have to recover your boat, that you’ll slow the group down and that they will, quite righty, feel obliged to give you some stick for your out-of-boat endeavours. Such is life.

There’s good swims and bad swims. Good swims are over fast and end only in loss of face. Bad swims aren’t worth thinking about. Sometimes, pulling at the grab loop is only the start of the ordeal. But, no matter how bad the swim, the jokes will start to fly soon afterwards. Some clubs keep tallies and hand out trophies to the most prolific “fish” amongst them. Others insist on the “booty beer” – a presentation of that day’s paddling shoe, filled with beer, to be downed in one go in front of the group. As harsh as these may sound, they serve a purpose – a chance to get together in a light-hearted way and reflect on the fact that things do go wrong. 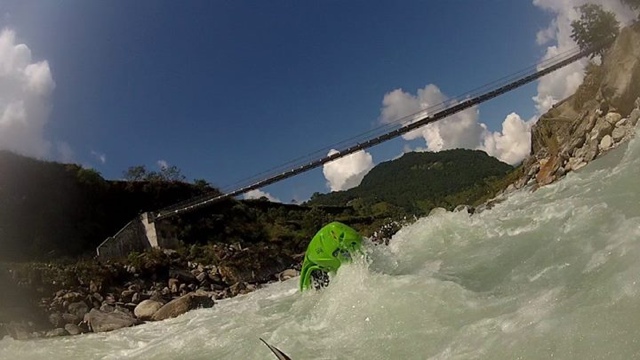 Everybody swims and we are all merely between swims.

Just outside of Pokhara, Nepal, the Upper Seti river is a classic Himalayan warm-up run. At normal levels, the 9km of continuous white water can be covered in under an hour with an efficient group of paddlers, moving as a team. It’s usually one of the first rivers to be undertaken by those looking to keep their skills sharp, before taking off on adventures further afield on the more remote, expedition rivers. For paddlers staying in Pokhara, it becomes the local run – a rollercoaster ride first thing in the morning, before heading back to find breakfast and get on with the business of the day.

After a short drive from the town centre, we arrived at the put-in, in the shadow of the impressive snow-capped peaks of the Annapurna range. Kitting up quickly, we hopped in to our boats and launched off, into the rapids below. After paddling the Trisuli river the previous day, the Seti would be a return to normality for me, with the style of paddling more like that of the British rivers to which I was accustomed to. Instead of monstrous waves, way up over head height, the Seti is defined more as a boulder garden, with crystal clear waves, holes and eddylines. But unlike the rivers back home, the Seti offers no respite. The rapids are continuous in nature, with little time to relax before being confronted by the next challenge.

We moved as a group, one behind the other, crashing through waves, darting round rocks and punching through holes. For me it was relentless. Up until this point, I considered myself to be a pretty reliable class 3-4 kayaker. Most of the rivers that I had tackled in the past had been “pool-drop” in nature – a handful of technical manoeuvres, ending in calm water, to rest before the next rapid. But here I found myself on Alpine style water for the first time, spending long amounts of time in the flow, making move after move, trying to keep up with the pace of the action. There was no time to take in the scenery and the tall suspension bridges overhead, adorned with Buddhist prayer flags and cheery Nepalese children waving their “Namaste” greeting. This wasn’t to be my usual kind of paddling trip. I was rapidly losing the feeling of being in control and allowing in all the negative thoughts. It was no longer about enjoyment. It felt like survival.

I watched Surjan, the Nepali safety kayaker, as he moved his boat through the rapids in front of me. He darted left and right, dancing about the river, slowing only to kickflip – barrel-rolling his boat through the air, using the crest of a breaking wave as a launch ramp. Here was a man, totally at ease and loving it. I concentrated my focus solely on the back of his boat, fixating on it. Where he went, I went. I closed the gap between us, sticking right on his tail, reasoning that somehow I would be safer the closer we were together. But this was to be my mistake.

We rounded a corner and another bridge came in to view, marking the almost half-way point. I followed Surjan, punching through waves as they crashed in on us from all sides. As we moved underneath the bridge, I was closer to him than ever before, adamant that if I could just go where he went, I would be OK. But, at the last minute, he span his boat out to the left, sprinting away from whatever hazard it was that I couldn’t see. Seconds too late, I spotted the tell-tale signs of a pourover hole.

To the left, a clear downstream V shape of water, indicating the safe path through. To my front, the raised lip of a ledge formed by a rock underneath the water. The downwards force of the water dropping over a lip causes the current under the water to spiral back upstream, creating a powerful backwash. For a big pourover, the best way to get through is to “boof” over it, planting a strong forwards stroke off the lip and lifting the knees to fly the boat over the towback at the bottom. I watched as Surjan darted left, down the V, whilst the nose of my boat dived straight off the lip and in to the hole.

For a moment, I thought I had managed to punch through, before the wall of water at the bottom hit me hard, stopping me dead. I reached over the foam pile of the hole, looking for the water being kicked downstream, to feel it’s purchase on my paddle blade. But then came a daunting feeling as the pourover sucked my boat back upstream, span it sideways and threw it in to a violent side surf. I lifted my upstream knee, to stabilise myself and stop the water from being able to catch the boat’s edge and flip me over. I pulled on my downstream paddle blade, using it for support to keep me upright, whilst I was thrown around like a rag doll.

Once a kayak is being side surfed in a hole, it can be extremely difficult to break free of its grasp. Whilst fighting to stay upright, the most likely way of being released is to find a weakness in the backwash of the water. Either, to pull the boat to one end of the hole, where the bow can catch the water moving downstream, or to hope that there is a spot where the water surges downstream just for a moment, enough to be able to break free.

I managed to move forwards along the hole, nearly catching freedom, before I felt the boat being sucked back in again. It was at this point, that I realised I had been at the back of the group. Had anyone even noticed that I was in trouble?

The boat was being thrown up and down by the water dropping in and I tried everything I could to keep upright. For a split second, my weight shifted upstream. The edge of my boat caught the water and I was over. Tucking forwards, I set up into a roll and came straight back up again, only to be bounced around uncontrollably again by the water. I tried, frantically now to stay upright, realising that I wasn’t going to be able to get out of this one on my own. In my head, I just wanted to buy enough time for the rest of my group to start setting up rescue. I grew more and more tired, from fighting the force of the water. The edge of my boat caught the water again and I decided that I could hold on no longer, it was time to bail.

As kayakers, we train constantly in safety and rescue techniques. I’ve lost count of the number of times I’ve swam from my boat to practise being rescued. But unlike on the training course, I didn’t take a deep breath and collect my thoughts before calmly pulling my spraydeck, loosening off my back rest and swimming to the surface. Sod that.

I held my paddle in one hand and ripped at the grab loop on my spraydeck. Instantly, I felt the rush of ice cold water flooding in. I put one foot on the plastic centre pillar and kicked the boat off me, wanting nothing more to do with it. I felt myself being dragged under by the current, through the washing machine and spat out to the surface by my buoyancy aid.

I rolled on to my back, keeping my feet up and looked around to see where I was. I turned my head to one side as a wave broke over me, and choked as I swallowed a mouthful of water. Looking up, I spotted a throwbag full of floating rope being thrown at me by one of the other paddlers. Grabbing on, I was swung in to the safety of the river bank and lay there, a coughing, spluttering mess.

I hadn’t swam in five years before the Seti, a river that should have been within my capabilities.  When you’re paddling well, you feel totally in tune with both your boat and the water. Nothing could possibly go wrong. Swimming is what other people do, surely? But just like from my climbing fall in the Peak District, I learnt that I was no longer invincible, that things do go wrong. 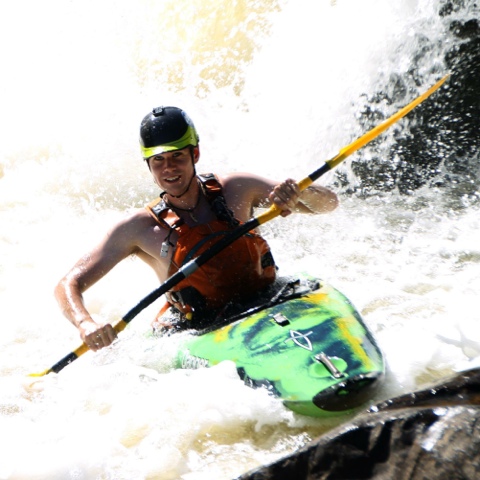 {EDITOR’S NOTE: Ian is a talented athlete and writer whose blog iboutdoor.com is loaded with great tales from his adventures in all the disciplines of paddling, climbing, mountaineering, and even gear. Check him out!

And, a quick shout out to DBP Admin Surjan Tamang, who made a quick appreance in this tale! One Love, One River, WORLD WIDE WALLACE!!!}