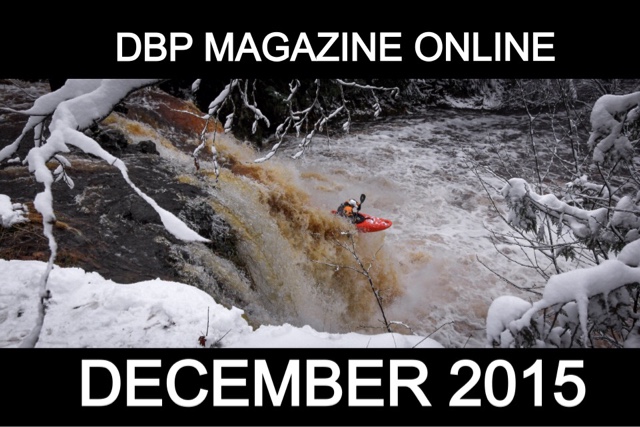 FROM THE EDITOR’S DESK-
When I went looking for this month’s cover photo, what I had in mind was an image of some snowy stout whitewater being run by one of my friends. I said this to myself, and logged into Facebook. The first post in my feed included the shot DBP MAGAZINE ONLINE selected, that  of DBP Admin Adrian Ortiz kayaking the Presque Isle River. Perfect! 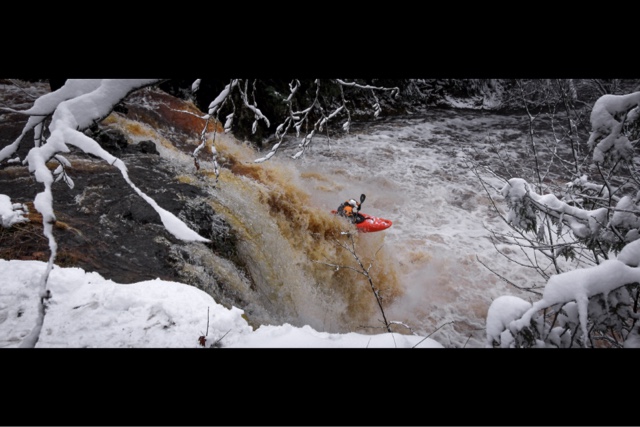 I asked young local paddler and photographer Jon “Sizzler” Sisley to tell us about rallying a winter mission in the wilds of the Northwoods. He took the photos in this article on the trip, and supplied us with a great trip report from the Upper Peninsula, as well as a rad cover photo worthy of our claim ‘World’s Best Free Whitewater Publication.’ I’ll give him the stage to tell this winter’s tale…
“It was a dreary afternoon; I was packing my things needed for the trip down south. Usually in the fall, myself and a few friends try to plan a trip somewhere warmer (hopefully) and it usually involves a Tallulah release. Since our destination was Georgia, I didn’t plan to pack my burly sleeping bag and down winter jacket. It was about a half hour before my friend Dan was going to arrive so we could car pool down to Chicago to meet the rest of the crew before starting our four day weekend. I was on the computer between getting things ready, when I decided it wouldn’t hurt to take a look at gauges up north. It had been raining off and on for awhile so there was a possibility it hit the shores of Superior as well. After American Whitewater opened, and I clicked on the Upper Peninsula tab, I was surprised to see a lot of green colored gauges.
I played with the idea for a moment and realized that we were about to drive for a total of two days, for two days of paddling. That’s a crappy ratio, but its not the first time a desperate Midwest boater has made the trek to some unfrozen water sometime during our long winter. I contacted the Chicago crew first; they were stoked on the idea of going north instead, so I texted Dan as well.  He was almost to my house, ending his 3.5 hour drive to me.  More boating, less driving? He was in too. So there we were, all changing plans last minute to head to the U.P. of Michigan! I grabbed my warmest sleeping bag, my winter coat, and whatever else I didn’t plan on bringing south and piled it into his vehicle. He was missing a few items for cold weather, but we were able to work it out.
We were excited; the trip was off to a great start. Heading in the opposite direction to boat in freezing conditions and hoping to get some great video to bring back home, I knew it was going to be a good time. What I didn’t know was the forecast for snow, and lots of it!
We arrived at the Presque Isle River, dropped gear at the bridge, and then I drove to the take out. I ran shuttle, feeling warm and ready to go when I arrived back at the put-in. We were the only vehicle around for miles and it was going to be dark soon, so we had to move fast. It was only raining at the time, no snow yet, but that was about to change. Scouting for wood as we rallied down the final mile of the river, it became so dark that our GoPro camera footage was completely black. I ended up running the 25 foot Manabezho falls barely able to see my line. With just enough ambient light to make our way through the woods, we hiked back to the vehicle. We quickly changed and put the gear away as the rain changed to snow. By the time we got back to town, a few inches had accumulated on the ground. ‘This was going to be an epic four days’, I thought to myself.
Stopping by the store to pick up food for dinner, I tried to text as many boaters as I could, hoping to rally the entire Midwest creeking community one last time for the season. One by one, I got messages back filled with questions about levels, where we were staying, and where to meet at breakfast to organize tomorrow’s  boating.
The snow came down fast; it was hard to see the road as we looked for the cabin. A few miles one way, only to turn around and retrace our steps. We couldn’t see the driveway with all the new powder; it was great. Finally recognizing the location, we grabbed what we could and started the hike back into the woods to the cabin. Snow stuck to the trees and covered every square inch, turning the woods into a winter wonderland. 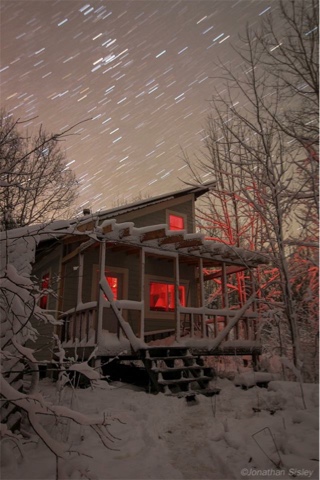 We got the stove stoked with wood, and turned on the propane burners to start our dinner. The muffled crackling of logs and sputtering of boiling water was a peaceful and warm welcome to the space. With no cell service at the cabin, I hoped the Chicago crew would be able to at least find our car parked near the road, and follow our tracks back into the woods. We ate dinner, and several hours pasted before any signs of people showed through the dark woods. When the white tree branches started to glow in the distance, I knew they had finally arrived. It was great to have the crew together, all laughing about our crazy change of plans, but it was worth it. Nothing beats a boating trip to the U.P.
The days to come were epic. Boaters from Wisconsin, Minnesota, and Illinois showed up to boat the finest creeks in the western U.P. It gave us lots of opportunities to shoot video, and pictures. I enjoy photography almost as much as being on the river, so to do both at the same time is really awesome. I am always learning more and more about photography, and I hope that trend continues. My experience with shooting video is limited, but I know enough to make simple edits and get the point across to the viewers. Being in the right place, at the right time is key. A lot of factors go into a good picture (and video) so having a good knowledge base before taking your equipment on the river makes it more rewarding in the long run. 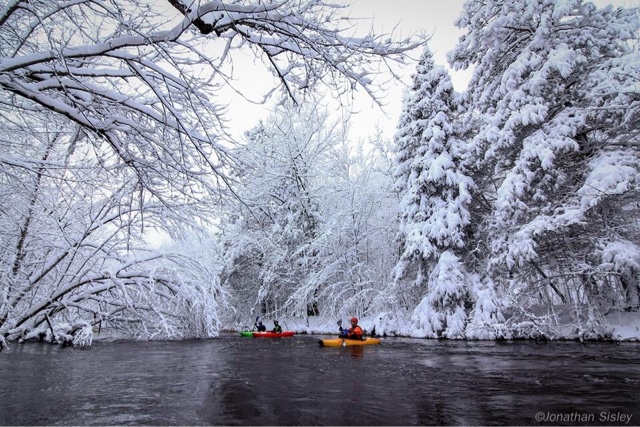 Each morning for the next 3 days we go up, gathered our gear and headed back to the vehicles. Our drysuits and thermal layers were bone dry after hanging in the dry heat of the cabin. An early start allowed for a full Presque Isle run, almost 16 miles to our take out,  Lake Superior; a mix of long flat stretches and diverse rapids, with a canyon with committing whitewater, leading up to the final mile which entails slides, waterfalls, and a paddle into the lake surf.
We boated other classic U.P. runs like the East Branch of the Montreal, a tight creek with smaller manageable rapids with wood being the biggest hazard and a nice 15-20′ waterfall to cap off the run. And the Lower Black, one of the steepest creeks on the South Shore, with several massive drops over 30 feet in height and a mix of undercut rapids in between.
It was a successful end of the year boating trip, great memories that I’m sure none of us will forget. Most of us are going to bust out the skis, and hope for a lot of snow to bring another great spring on the South Shore. 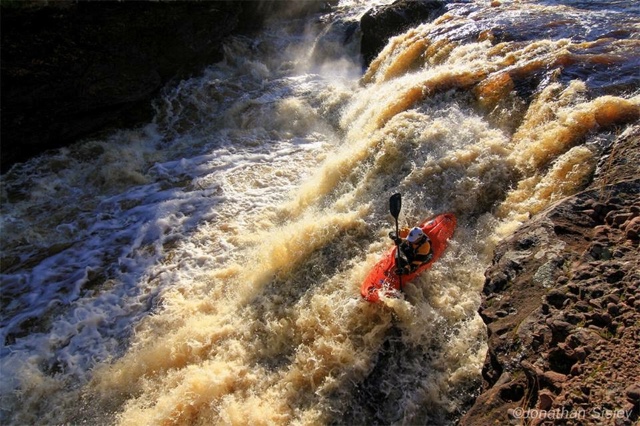 I use a Canon 60D with a Tokina 11-16mm, remote shutter cable, tripod, and Adobe Lightroom CC and Photoshop CS5 for post processing.  Adobe premiere CS5.5 for video editing (I have A LOT to learn in this program) for transportation I use a Watershed Ocoee dry bag – best dry bags hands down.” 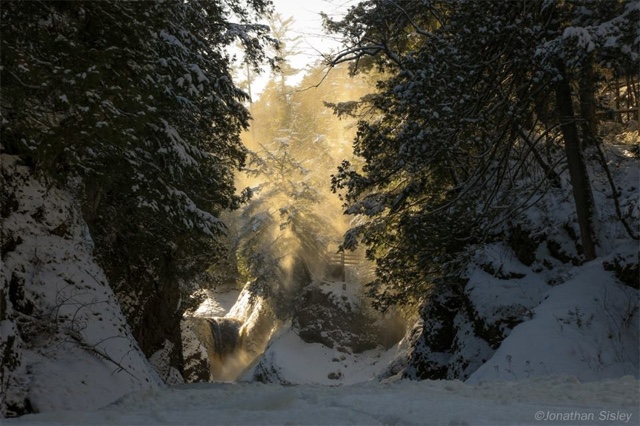 Great photos and even better times with the homies, Sizzler! Thanks for all and good luck with the photography and videography. This kid goes out and styles the best Class V of the region and has a great future ahead of him in the sport. I’m stoked to see where he goes.
We’ve got a great month coming to you guys, with some sweet interviews, a festival report, some gear and shop talk… and more. We are coming off our one year anniversary November 28, and the entire staff was stoked to wake up on the morning of the 29th to see we had reached our goal of 80,000 reads (the actual count was 80,015). This means a ton to those of us who worked hard to deliver a solid product all year, built on the foundation that we didn’t spend a cent on advertising and didn’t charge a cent to read. Hang on for the ride!  We plan on continuing to bring the goods.
The Editor-in-Chief
“Chicago” Mike Toughill 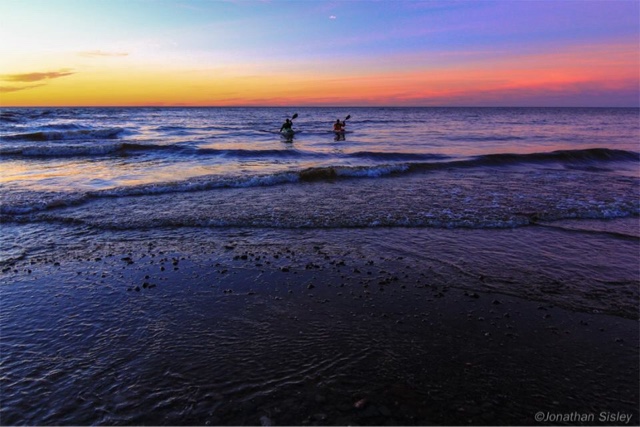