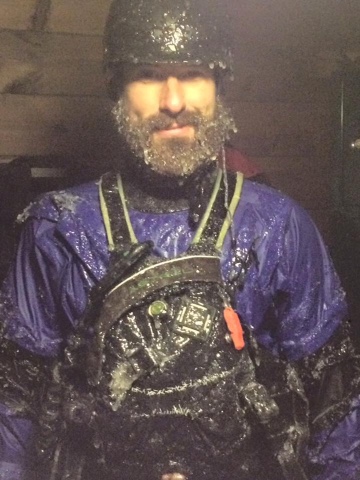 December 19th 2015
Another day starts on the Peshtigo. We wake late and as always I’m behind schedule for our 1pm put in time. I arrive at the house ready to rip, we partake then suit up. Todd and I dress slightly faster than Aaron, J-man, and Jamey and we head up to the put in. Rocking out on the way up (despite being on the #gangstaraptour) we simultaneously look at the thermometer on the mirror:  it reads 22°. Just yesterday Todd and I had decided we would never want to paddle more than a mile or two at less than 19°… we’re getting very close and we both laugh! We’re  constantly pushing each other a little further every day.
We get to the put in a few minutes before the other guys and I send my play boat, Sully, down the hill bouncing towards the river.  Todd screams, “Lay down baby!” and right as we expect to hear a splash we look to see it sliding on ice that had built up four feet thick on each shoreline. The day before we were cold, and there was no ice.  This is a sobering moment. Todd and I both understood the severity of this run and we take a moment to zen out and wait for the crew.
Aaron and the gang arrive shortly afterwards, and we slide in. I’m bumping a waterproof pocket speaker with some dirty rap and I push my way through the slush over to Todd. We chat about hitting our rolls and staying dry. The rafts catch up and Jamey fires off one of his famous lines, “Cold nuts soup!” as he passes by. 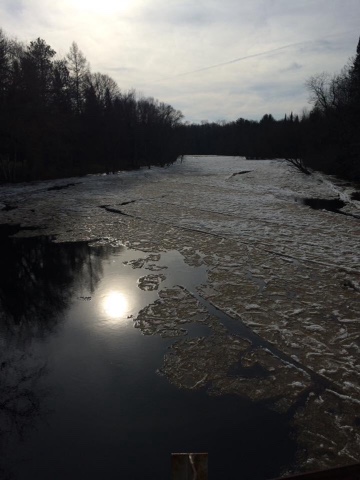 As we paddle the boulder garden two moments stick out in my memory… It’s s nearing dark and I look to the sky to see the moon. I realize we have more time than I originally thought; the sky was really blue compared to the moon. Second, I remember taking odd lines just to frolic in the slushy eddies. Before I know it we are at First Drop and I’m passing Jamey heading into the side curl. I take a center line and eddy out to play safety. They all cruise by, no problems, Aaron yelling, “Surf dat wave pussy!” We all decide against the cold surf and head towards Second Drop. Jamey catches me with his yellow funyak and I let him pass as I drop in to surf on the fly. The wave hits my back like a feather pillow, I bounce twice and look up to see a blue Kosirs.com Mini Me pushing towards me,  Aaron thinking six-pack all the way. I plug my nose, flush out, and roll. Instant brain freeze, the water turning to ice as I roll up. I look to Todd and he is hustling back up the hole, pulls off a smooth pass three or four times, and the wave rolls him as well. He turns up with a frozen beard and more ice than I had. IT’S THAT COLD.
Third Drop is next on the agenda. We skip two holes we normally play in to avoid getting too cold, the rafts now way out in front of us after our surf. Third Drop is as burly as ever, so I take a left line, avoiding a giant hole, with Todd right behind me. It catches his tail and over he goes- WALLACE!  Now, Todd is a killer boater who is normally chasing MY gear from riverbank to riverbank. Now he’s back up and covered in ice. For anyone that knows the Peshtigo,  Joey’s Hole and 5 Foot Falls are shortly after Third Drop so Todd is still in the thick of it, but we run both with no problems, the waves above Horserace on the horizon.
Todd and I are well out of sight of the rafts by now and I’m leading us into this beautiful micro gorge. Down and down we go, and I look back for Todd to find Wahaha Hole had overturned him and he’s swimming! This is not a regular occurrence for Todd. I set off corral his boat and paddle, but with the ice forming along shore there are no eddies! It takes a good half mile, with Todd running through the woods while I look for a safe spot to reunite him with his play boat. The water’s ripping hard and it takes Kari’s Falls and two tree pins before I get it back to him.
We talk about our options and decide no matter how cold we are, a sprint paddle of the last two miles of class 2 was best. My tunes still cranking, I remember the moon, now the brightest light left in the sky. Paddling out the final waves of the run we can’t help but notice how much ice had formed on us and our gear. Laughing and cranking the tunes, we approach the flat water. At the start I had been purposely paddling through slush in the eddies, now I was begging for a channel with no ice. Hustling back to the bridge, we get there to find it too dark to read the gauge. Aaron says it had read +20. Alll I can think is, “What a legendary day, huge water, huge surfs, huge rescue, and a HUGE DAY ON THE MIGHTY PESHTIGO!” 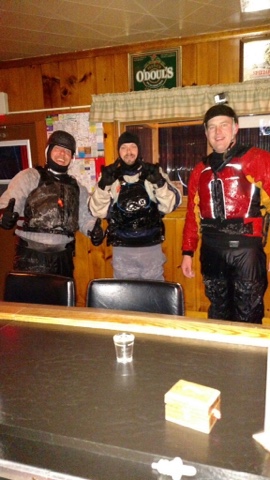 {EDITOR’S NOTE: Dale is an Admin from the formative days of Dirt Bag Paddlers, River Manager at Kosir’s Rapid Rafts, and he’s been rafting for 10 years but only kayaking for two seasons. He and we all encourage the new boaters reading this to get out there safely this winter and continue paddling! It takes solid modern gear, but it’s totally worth it, and the difference from paddling during the regular season will amaze and delight you! Happy Holidays and Merry Winter Dirtbaggin’!
Oh… And why no footy? The GoPro froze up. Literally…}