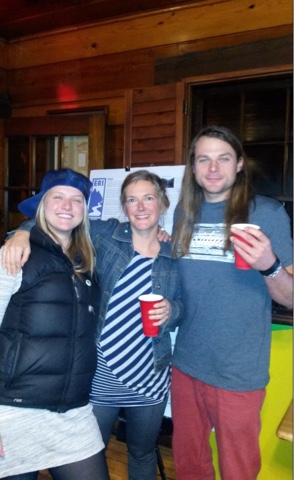 Background with NPFF and the Bluegrass Wildwater Association: I started kayaking in 2008 and was completely swept away by the sport. I got involved with the BWA, which led to me to the NPFF in 2010. I’ve pretty much, at one point or another, taken care of most aspects of the festival. I’ve been in charge of the kitchen, headed up the silent auction donations, been the Director, the media coordinator, the guest host wrangler, and the emcee. Every year I say I’m going to retire, but every year I have a competitive goal to be able to give away more money than the previous year, so retirement seems elusive.
DBP: We had such a great time at last year’s event, and touring the area as well as enjoying the festivities at Buffalo Trace and The Brick Alley. Can you tell first timers what they might expect?
Bethany: “First timers will immediately be seduced by the smell of Buffalo Trace Distillery; it’s very distinct. Bourbon is one of our most prized traditions in Kentucky, and we love having the festival at BT. Definitely take a distillery tour (offered for free on Saturday and includes a tasting). If you’re traveling to the fest from out of state for the first time, you should take the time to drive around the back roads to check out the horse farms, they’re stunning.” 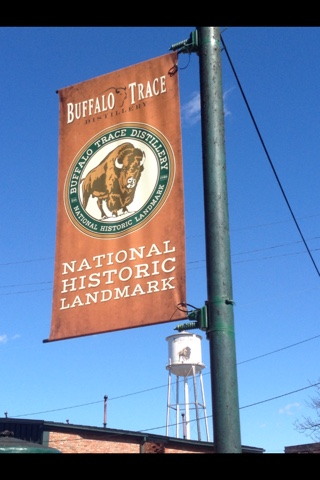 “As far as the festival itself goes, just expect to watch a plethora of great footage that’s been submitted from all over the world (from amateur, accomplished, and professional filmmakers), drink craft beer (we’ll have 12 local kegs), eat good food, and get truly killer deals on gear at the silent auction. We usually have a splendidly rowdy crowd that gathers after the festival at the Brick Alley—a bar in downtown Frankfort. There will be dancing.”
DBP: DBP Admin Dave Hendrickson has hoisted every speaker (except Doug Ammons, who respectfully declined) to his shoulders at the Brick Alley for years! Last year it was Ben Marr. Tell us please about the featured speaker this year.
Bethany: “Dave’s gonna have his work cut out for himself—we have two guest hosts this year, Steve Fisher and Pat Keller. We went for a long stretch with western US paddlers (Tyler Bradt, Doug Ammons, Rush Sturges, and Fred Norquist) and then we had Canadian Ben Marr last year. We wanted to bring it back to the southeast this year. Steve hails from South Africa but is currently living in western North Carolina, which is where Pat hangs his helmet too.”
“They’re both well known independently in the kayaking world—Steve as one of the most skilled filmmakers and Pat as one of the most talented kayakers. In the past couple of years they’ve teamed up for some exciting expeditions. They tackled the first legal descent of the Merced River in Yosemite together in 2015, and the Opalescent River and its Hanging Spear Gorge in 2014. Steve produced tremendous footage of both expeditions.” 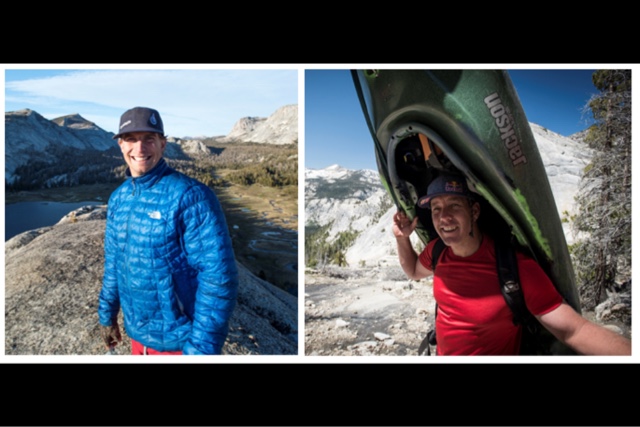 Pat & Steve, photo credit Scott Martin
“In 2015, Steve initiated a campaign to raise funds for an instructional kayaking film, Dreamline – a Fresh Spin on Kayak Instruction, and he succeeded. He took some professional kayakers, including Pat, to film on the Zambezi in December, which was the first phase of the production. They’re going to tell us all about this new venture, along with some of their previous exploits, on Saturday night.”
“On Friday night we’ll hear from guest speaker Lonnie Bedwell. Lonnie, a 2015 National Geographic Adventurer of the Year, is an accomplished paddler that was the first ever visually impaired kayaker to complete the entire 226-mile stretch of Colorado River through the Grand Canyon. He most recently ran the Zambezi with a crew of Jackson Kayak paddlers, including Steve Fisher. Steve will be bringing some great footage highlighting Lonnie’s time on the Zambei.”
“I think Dave Hendrickson should somehow hoist all three of these guys. At the same time.” Whoa! WALLACE!!!
DBP: We are bringing a package of goodies to offer up for the silent auction, which is well known for having some awesome gear and river paraphernalia available. Last year I lost out on Kirk Eddlemon’s books. How much money do you hope to raise for the cause? What’s your favorite item up for bids this year?
Bethany: “We’ve given away $11,300 to organizations dedicated to river conservation and access the past two years so my personal goal is to raise $12,000 this year. We’ll only be able to do that through silent auction sales. We’re grateful to get so much support from sponsors and we’re incredibly appreciative of their generosity.” 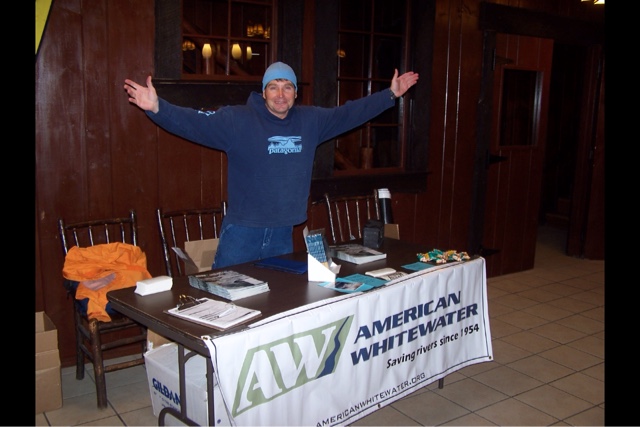 “Asking about my favorite item up for bid is like asking me to pick a favorite dog. If you’re going to force me to pick……I’m super jazzed to have a Liquid Logic Mullet in the auction. American Whitewater teamed up with Liquid Logic to make that donation happen. Mullets aren’t available to the general public quite yet so whoever gets their hands on this one will be one of the first kayakers to sport a Mullet.” Nice! 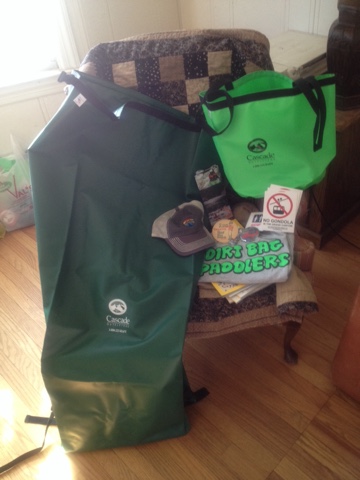 Dirt Bag Paddlers teamed up with Cascade Outfitters to donate this batch of goodies to the silent auction.

DBP: We are stoked for the race on Elkhorn Creek, which got snowed out in a major storm last year. This year the weather forecast is looking super. Multiple DBP Admins are out for victory! Can you give us any pointers? 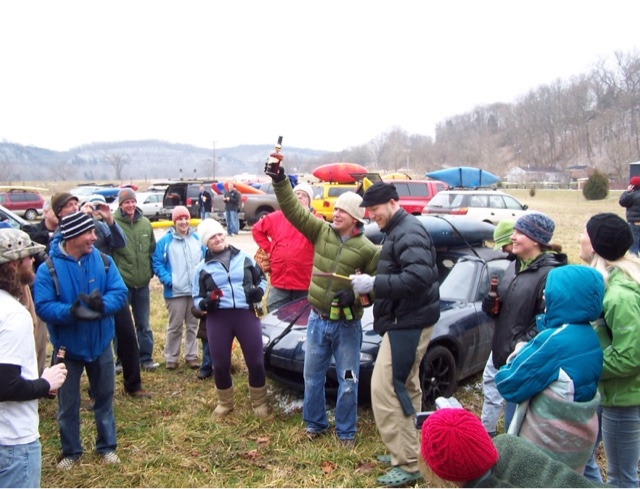 Bethany: “If you can limit your hangover on Saturday morning I think you’ll have a tremendous advantage.”
DBP: We love to paddle and party! Core question – beer or bourbon?
Bethany: “You can’t ask a Kentucky girl to choose between those two. My answer is ‘yes, please.’
DBP: Thanks for your time, Bethany! We look forward to catching up with you next weekend!
Bethany: “It’s gonna be a great festival! The weather is going to be perfect; the beer is going to flow smoothly, and we’ll get to see some great carnage clips on the big screen. We’re hoping for a great crowd of kayakers, single bladers, open boaters, SUPers, and rafters. You can get your ticket in advance for $20 online (http://store.americanwhitewater.org/collections/miscellaneous/products/2016-npff-tickets); it’ll be $25 at the door. See y’all next weekend!”
DBP MAGAZINE ONLINE coverage of NPFF 2015-
http://dbpmagazineonline.blogspot.com/2015_02_19_archive.html?m=1
The Adventures of El Rio Loco Paddling Club from the 2004 NPFF
“Koontz Flume” one of the winners from 2013
Some links:
National Paddling Film Festival on Facebook-
https://m.facebook.com/pages/National-Paddling-Film-Festival/200503817986
Bluegrass Wildwater Association-
http://www.bluegrasswildwater.org/NPFF/
American Whitewater-
https://www.americanwhitewater.org
Buffalo Trace Distillery-
http://www.buffalotracedistillery.com
The Brick Alley-
http://www.barfinder.com/listings/the-brick-alley-46447-details.aspx