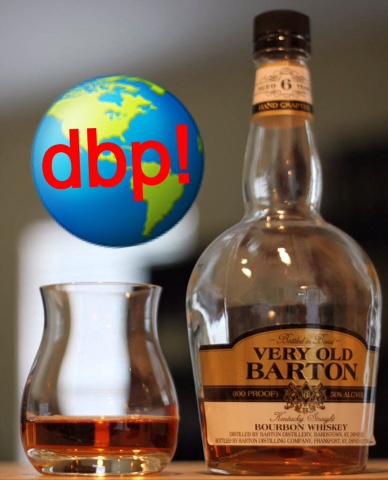 Very Old.
Barton, that is. The taste of bourbon on one’s lips, like the black smudge on the old buildings of Frankfort KY, never left once Associate Editor Wes Breitenbach and I arrived at this year’s National Paddling Film Festival a few weeks back. The classy plastic bottle was passed between us and the other members of our posse, DBP Admin Kelly Gladen and friends Michelle and Tommy, who were stumbling drunk towards the exit as we arrived Friday evening. The Kentucky night was very warm for the season, foretelling a weekend of sunny Spring weather in the middle of Winter. Sufficiently watered, we headed into Buffalo Trace to enjoy, erm COVER, the party in detail. 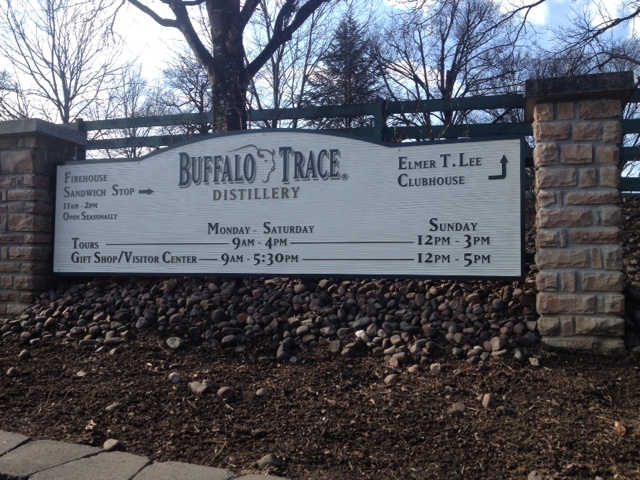 The NPFF setup is simple. Downstairs there are some vendors’ booths in the large common room, and the fabulous silent auction room sits off to the side. We had brought a sack of goodies from Cascade River Gear and Dirt Bag Paddlers for the auction, but I was a bit buzzed, so I turned the sack over to the nice folks running the gate, and shambled straight upstairs to the free beer. 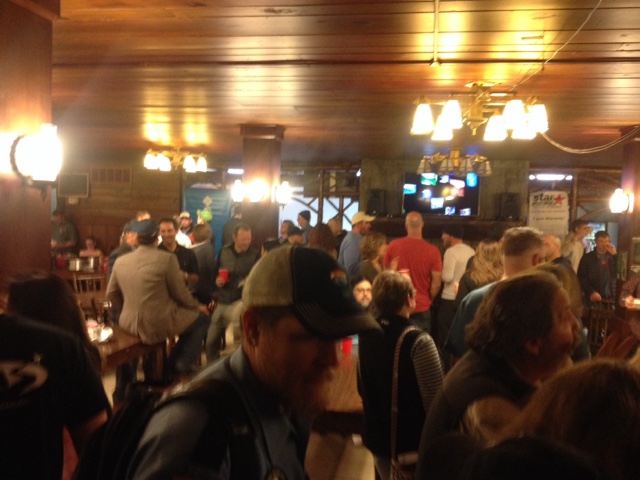 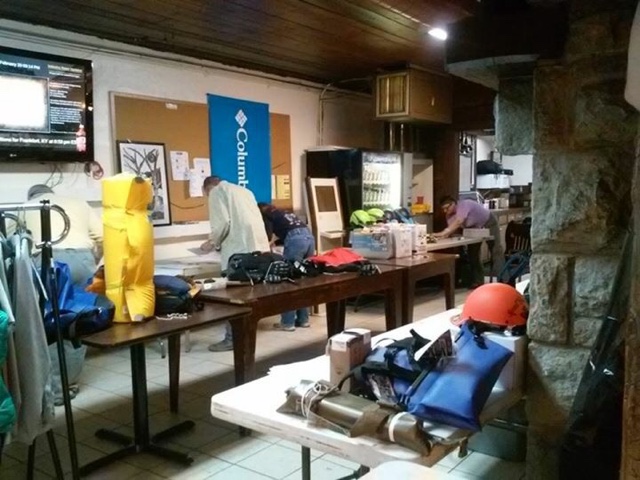 Upstairs is a large room filled with chairs and a big screen for watching of the films. The back room housed the bar and access to the deck. Free dark beer from West Sixth Brewing and Country Boy Brewing flowed all night both nights, and the playlist of movies was impressive indeed. On Friday we watched ten or so of the 27 total films played! But what may be the most fun is the catching up with friends, which was best done while enjoying the beautiful grounds and mild temps outside, a stark contrast to the bitter winter conditions last year. Those of us who had only known the snow and ice of last year were truly impressed with the charm of Buffalo Trace and the city of Frankfort overall. 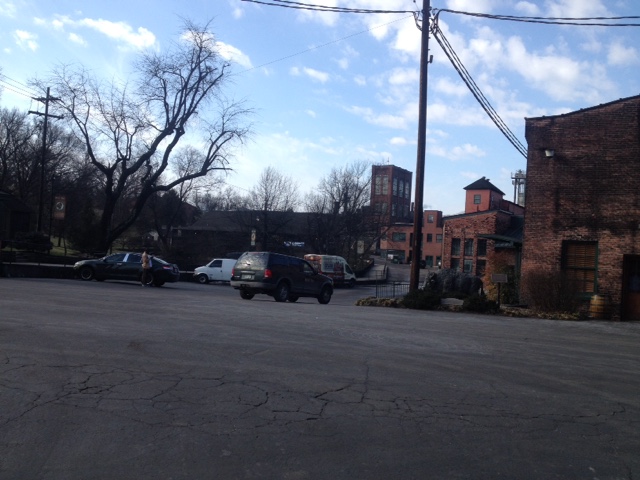 Saturday morning, Wes and I toured the fabled Buffalo Trace bourbon making compound, a National Historic Landmark. The smell of aging oak barrels of goodness can’t be described in the written word without sounding like a snob; it’s best enjoyed with a nip or two of Very Old. We drifted off to grab our boats, rally with the gang, and paddle the Not-NPFF Race on nearby Elkhorn Creek. The drive through the old city center was pleasant, and we first noticed that grimy ring that was all over the buildings at the distillery was also present downtown. Ah, I thought. Everything here is steeped in Very Old. Swig. 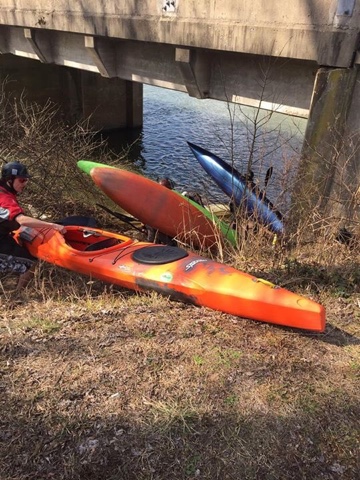 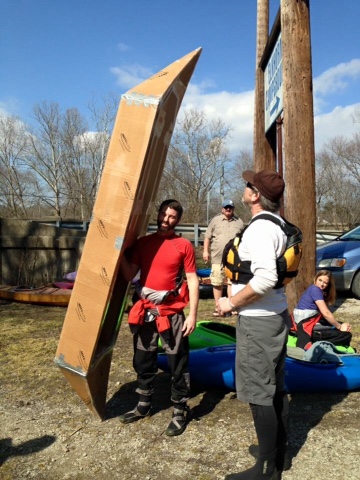 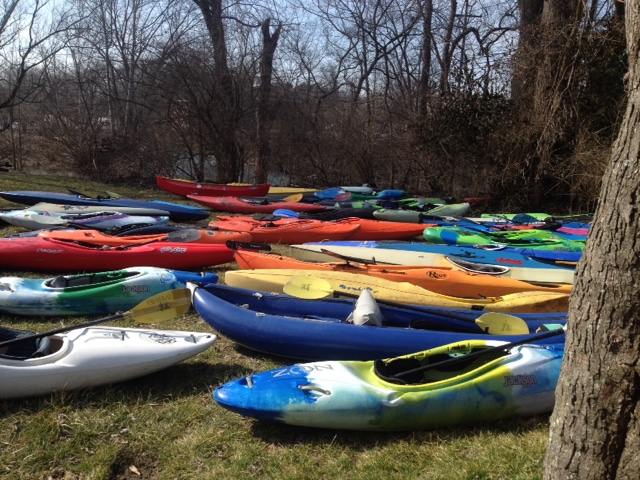 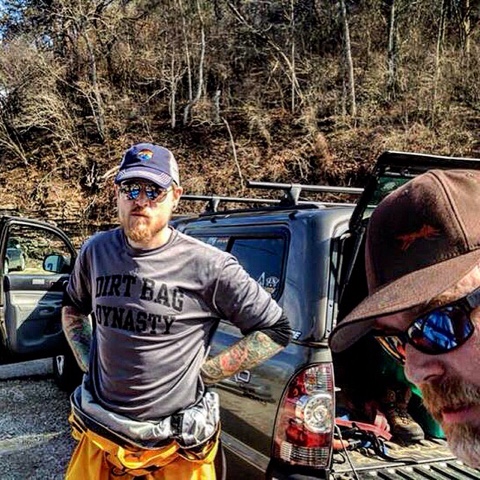 We were a bit confused, so we dropped the boats, the girls, and me at the put in. Therefore, I didn’t properly register for the race I was so excited to win, because I’m lazy and I didn’t finish reading the race directions through to the end of THE SENTENCE. Wallace. Wes did register, and realizing down at the bottom of the dam that no one else was hand paddling, switched up and thus unofficially won his division. Looking around at the put in, I realized there were only three IKs being run, Kelly and I (two different divisions), and a fun local sporting buffalo horns on his helmet and a buzz. After quickly measuring, he and I concurred that he was above 11 feet, and I just shy, thus we were in two different divisions and thus both winners. Having thus pocketed the “unofficial” win even before starting, I settled in to fully enjoy my victory.
I did get a chance to chat for a bit with Pat Keller, the nicest kayaking legend you’ll ever meet. He was chilling with his dog and a few boats outside the Liquidlogic van he dirtbags. Pat is for real. Don’t hesitate to go up and shake the man’s hand. Pat offered to let me demo the shiny new Braaap sitting there, but with an eye on my division, I politely declined. 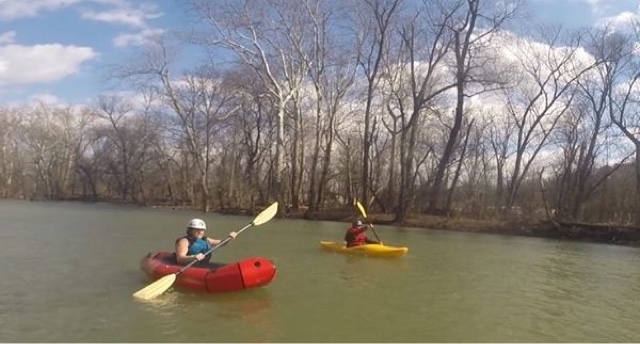 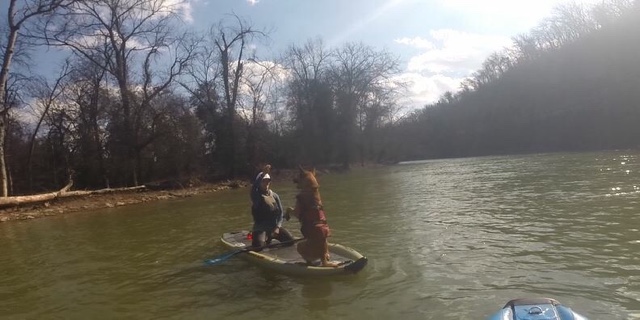 Elkhorn Creek is about as good as it gets on Class II whitewater, fun and sporty, with lots of small wave train rapids. The weather was sunny and approached seventy. The locals were just as warm. There were all sorts of serious boats out there, but plenty of fun people out to enjoy themselves like us as well. I saw a few tandem kayaks with dads and kids out for a rip. There was the guy who paddled the big cardboard boat too. He made it about two thirds of the way before his craft gave way for good. And the young lady paddling a SUP with her pooch. Wes raced ahead after the dam portage and race start, while we dropped back to truly enjoy our day. Tommy in his kayak and Michelle in her packraft are new to paddling; this was their first day on the river in 2016 after starting in the sport together last year. It was very fun to kick back and soak up an easy run for me, and watch my friends challenge themselves in the progression we all must make as paddlers. Elkhorn is perfect for new dirtbags. 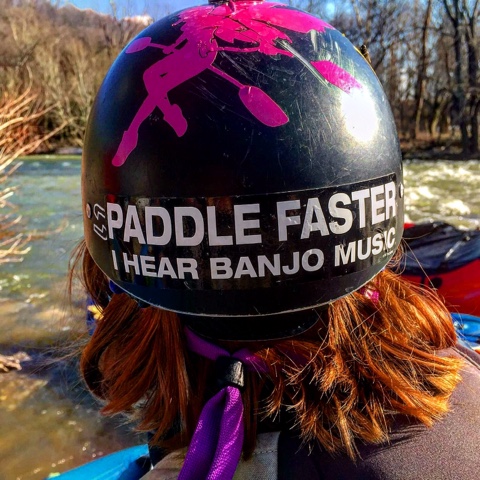 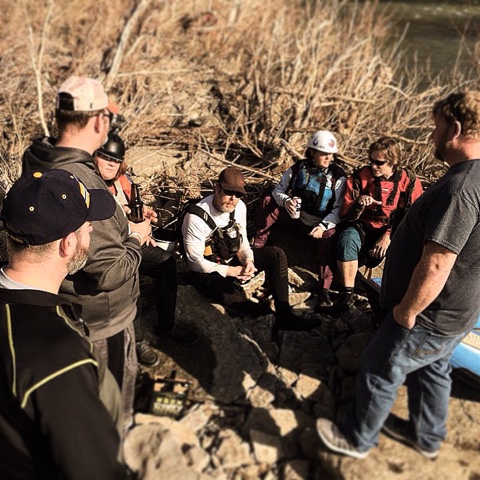 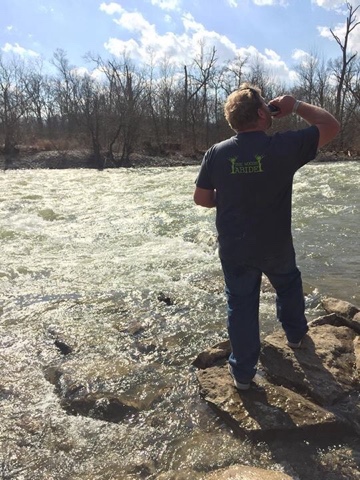 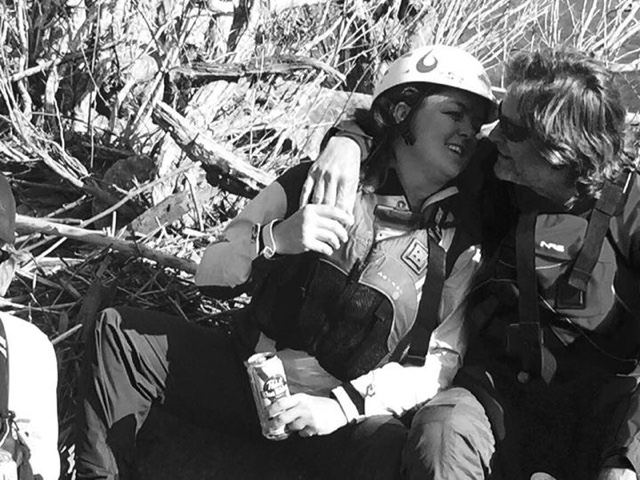 So is Very Old. We pulled over for a few minutes to chill and watch the very end of the flotilla out for the race pass by, linking up with DBP Admin Dave Hendrickson and his friends from Indiana who had come to the banks to drink PBR and see the race. We were joined by a local paddler, Mike, and we all paused to soak in some rays and warmish beer, and truly immerse ourselves in Dirtbaggin’ properly. Dave’s buddy Brent Fraken captured some great shots on his phone at this time, one of which is now our March cover photo. After the break was over and victory complete, we broke camp and finished out the paddle to the takeout. Most of the racers had dispersed and headed back to town and the festival. We followed shortly after. 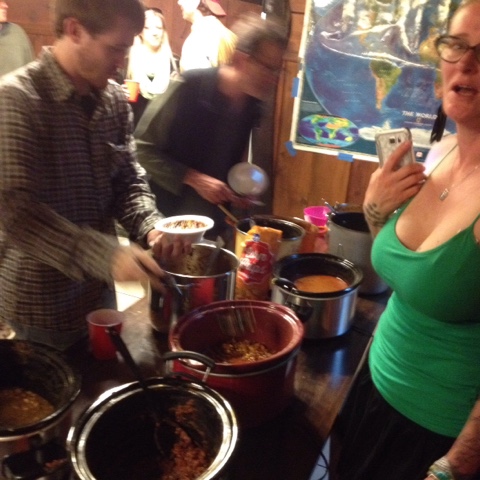 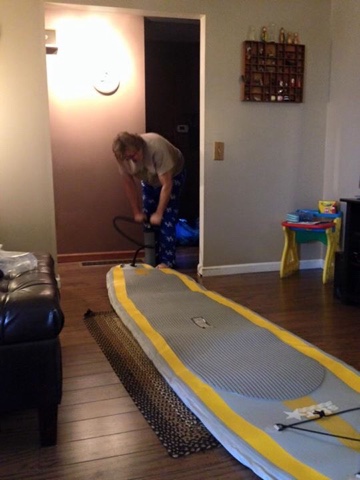 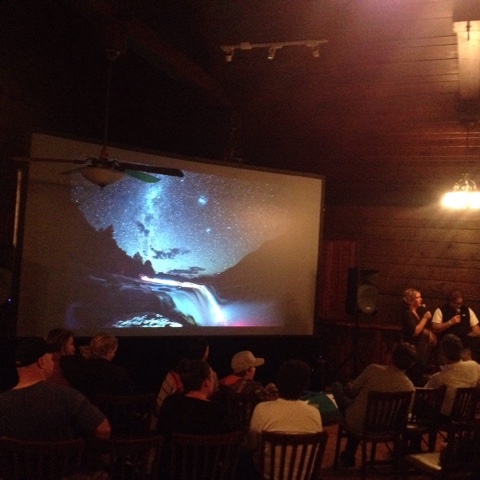 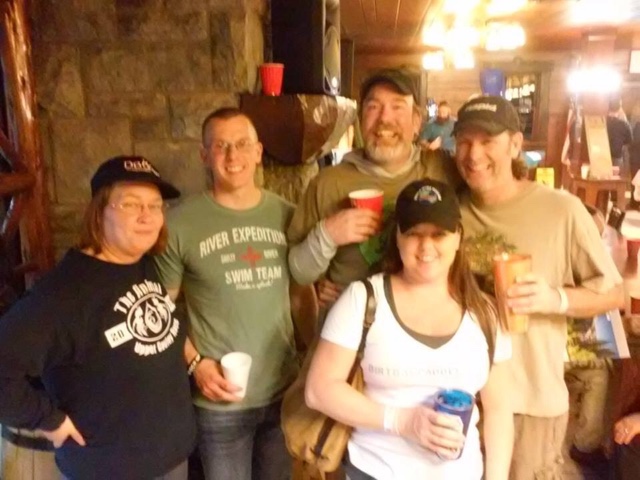 Saturday night was a blast! A bit of Barton’s and free beer washed down bowls of chili from the cook off contest. I made my own award winning mix from the last scrapes from the crockpots. Tommy won an inflatable SUP board in the auction. We were super stoked when DBP Admin Mike McVey’s photo of a riverboarder lit and running a stout in New Zealand at night unexpectedly won Photo of the Year. (When I blasted out the win on DBP’s Instagram account, Mike was totally unaware he had been entered!) The movies were top rank as well, but the weather was so inviting we spent quite a bit of time out in the gazebo. The pinnacle of the entire weekend were the keynote speakers, Pat Keller and Steve Fisher, presenting about the Dreamline project and their recent time on the Zambezi River in Africa, as well as their 1st D on the Merced River in Yosemite, CA. (Wes filed a report on this trip last year http://dbpmagazineonline.blogspot.com/2015/09/keller-fisher-dipping-into-merced-small.html?m=1 ) The footage was spectacular, as expected, but their personal interaction with everyone was the true highlight. Steve’s appreciation of the joy of paddling for all stages of development was refreshing and is much needed in our community. Both guys are really chill and approachable, which once again reflects how special our kind of people are. It was awesome.
I was ramped up to hit the Brick Yard for the afterparty, but Wes was feeling Very Old indeed. I gathered him from his resting spot, but he wasn’t going to be rallying this time. Dave proceeded to hitch to the bar without us after haggling with everyone for a ride as they left, and repped DBP properly (he ALMOST got arrested at the end of the evening, and the dirtbag driving DID.) Wes and I got rescued by none other than our homie Mike, whom I had met at the safety meeting at the end of the race. He was also a BWA member and volunteer at the festival, and he gave us a very fast ride back to our hotel and beckoning beds. After that much paddling, partying, and Very Old, we were SPENT. And planning on paddling the next day. 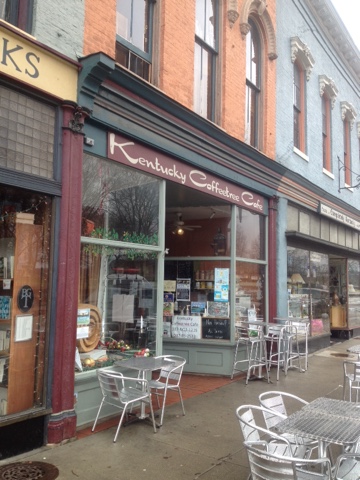 Wes and I rallied early to the Kentucky Coffeetree Cafe in downtown Frankfort Sunday morning, hoping that strong caffeinated beverages and good food would dispel the booze fumes from our minds. Both were delicious, and we weren’t the only ones there who had weathered the festival and the bourbon all weekend: Steve Fisher and Pat Keller were sitting across the way from us, beside the man wearing what appeared to be duct tape diapers… Anything goes in Frankfort, I guess. After a quick chat with those heroes, we ran into Bethany Overfield, who had written the NPFF preview that ran in this publication a few days before the festival http://dbpmagazineonline.blogspot.com/2016/02/previewing-national-paddling-film.html?m=1 . I got the opportunity to ask how the auction and ticket proceeds had gone (“good!”) and how the items we had donated had gone over (“what items?”) Turns out the sack had been misplaced or something (I blame the Very Old) and the items had never made it to the block. Oh well, I said, when it turns up please split the goodies amongst the volunteers in some sort of fitting way. Bethany and her friend assured us the DBP panties would be put to good use. Bravo on the great job that all of the volunteers did in putting on what was most definitely a righteous time! 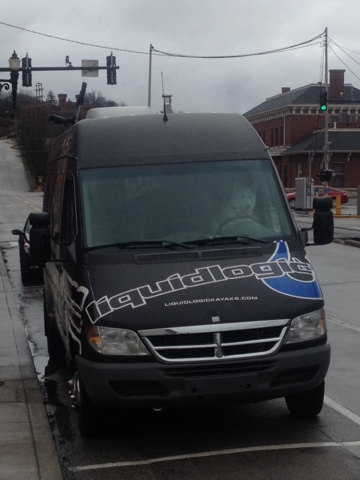 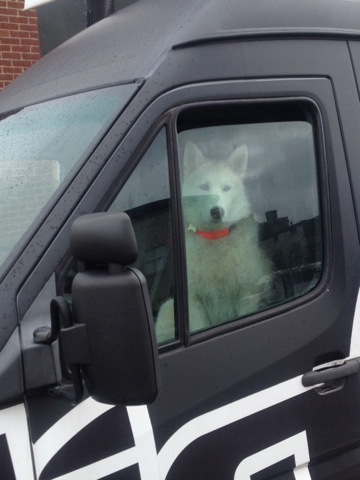 Nursing slight hangovers (ok, Wes was pretty wrecked!), we wandered back to the Breitenbach Dirtbagmobile down the street. Walking up, we spied Keller’s Dirtbagmobile parked a few spots away. Sitting content in the front seat was his dog. Ready to roll! We polished off the coffee and last drops of Very Old, and said our fond goodbyes to Kentucky. Till next time! 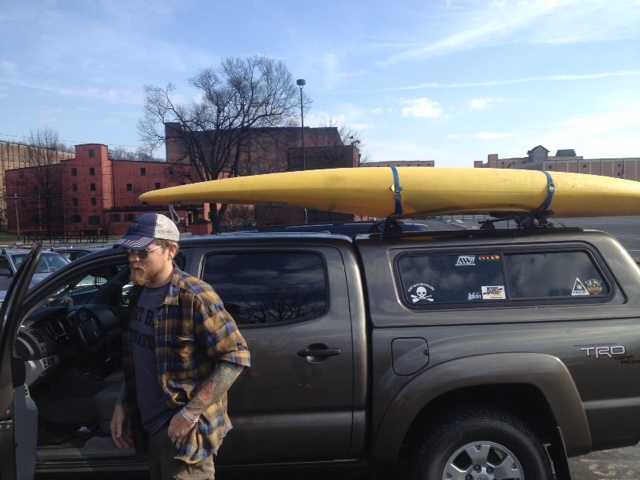