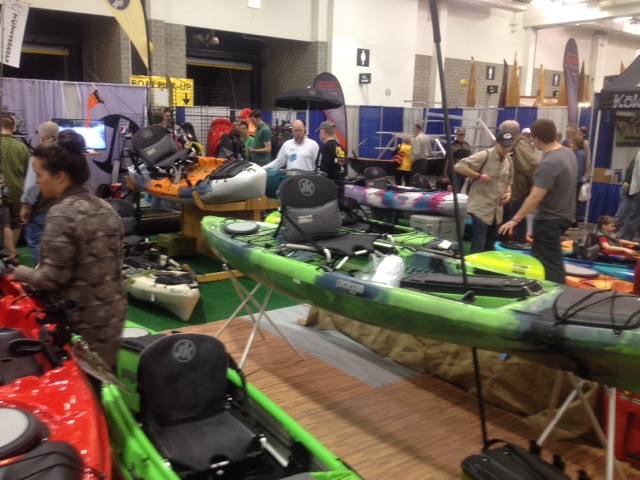 Billed as “the World’s Largest Canoe, Kayak, SUP, and Camping Consumer Show,” Canoecopia marks the beginning of the paddling season for the paddling community of the upper Midwest. Hosted by retail store (and iconic cornerstone of the local scene) Rutabaga {rutabaga.com} at the Alliant Center every year on the second weekend of March in Madison, WI it’s a great way to see all the latest gear, stock up, and meet with friends both old and new. I met up once again for another year of “Canoecoping” with fellow DBP Admin Dan Bowers and his friend Angie, paddling director at an Illinois county forest preserve, to enjoy the day and report for the magazine. 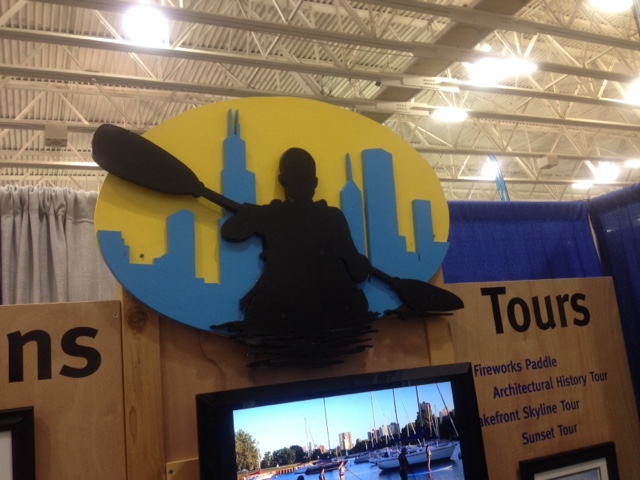 We rallied at the Kayak Chicago booth {kayakchicago.com} to start our day. We have all been friends and paddling partners for years. David Plascencia was holding down the fort. It was fun to listen to the banter between the show goers and David, talking about various trips around the area, both those offered by Kayak Chicago as well as whitewater runs. The guides there are much more than touring kayakers, they are true whitewater dirtbags. Two of them are DBP Admins, Todd Schaefer and Brian Kretschmer, and all of them love kayaking and sharing that love with their customers. MFrom the top down they are a great organization! 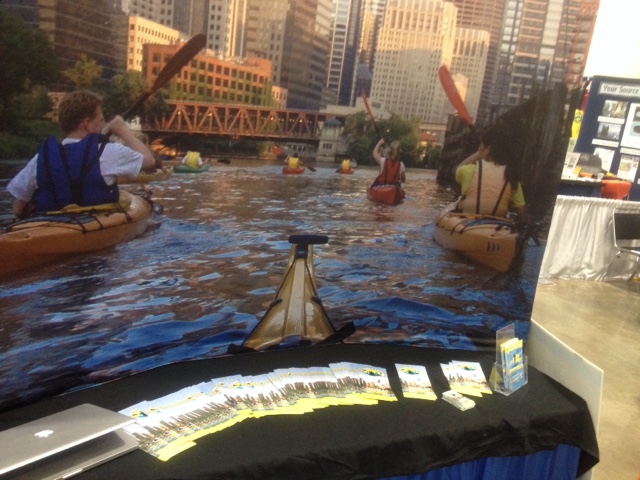 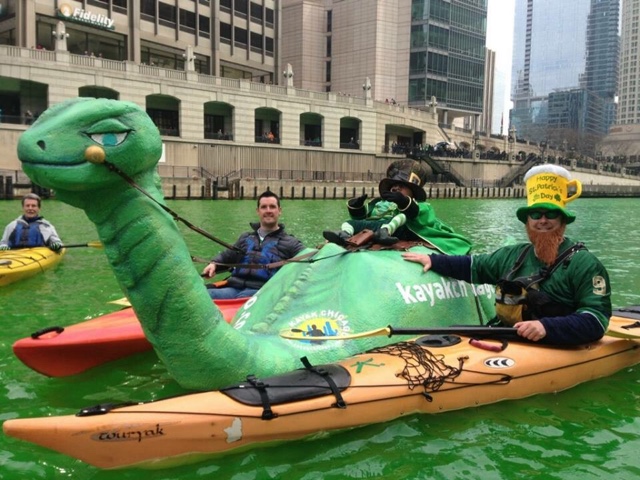 From there we journeyed beers in hand over to the Astral booth. {astral.com} (At this time DBP Admin Aaron Erdrich had not yet joined Team Astral, something we are very stoked over!) Although they make tons of great gear, in particular their life vests which was their original product (I wore an Astral rescue vest for years, the precursor to the Green jacket), I was there for the shoes. Brewers, in fact. I love the new designs! I’m especially impressed with the latest soles and their grippy feel. But as I told Gabriel, the sales rep and fellow dirtbag working the booth, the ones I own (the black and white Brewers from the first production run) still haven’t worn out enough to warrant replacing. Now it’s true I only wear that pair for boating, but that includes fairly active rescue boating for four seasons at Kosir’s Rapid Rafts. I give Astral two thumbs up! 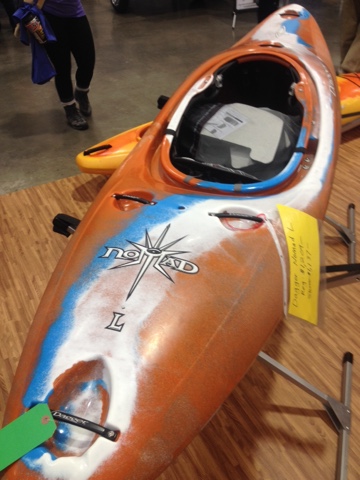 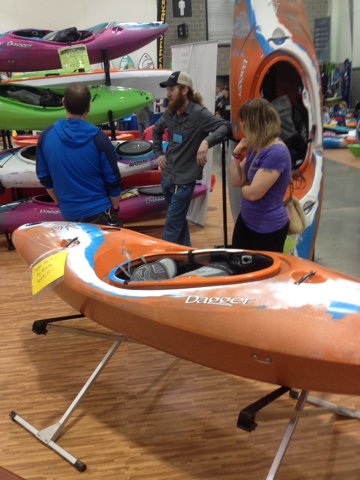 Next we drifted over to the whitewater kayaks. The Dagger display drew Angie and  Dan’s attention. Angie was looking into designs that would be suitable for the mild water boating her customers use. Dan is an avid whitewater boater and mild water instructor on the Rock River. He has tons of experience paddling and assessing qualities of boats. I asked him about the new Nomad (the only floor model which we looked at was already sold. We found that to be the case with most of the high end whitewater gear on display that day – perhaps in part because the vendors didn’t focus much on the relatively small whitewater crowd in the overall Midwest paddling community.) Dan had this to say: “After 13 years Dagger finally updated one of the best creek boat designs on the market. The new Nomad has finally hit the shelves and it looks bomber! Noticeable rocker, sleeker water shedding deck, more volume and sexy logo. Dagger also busted out the Nomad in three sizes, Small, Medium, and Large to accommodate more folks or give boaters the option of going big or styling small! They advertise that it is even faster than the previous version, and I can’t wait to put it to the test!” 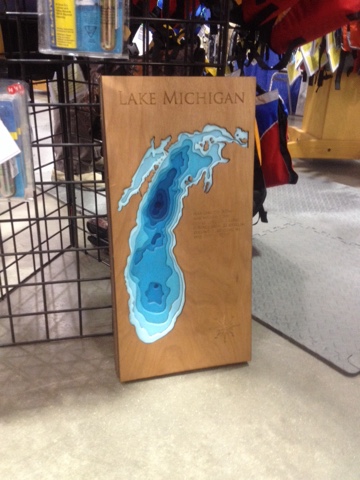 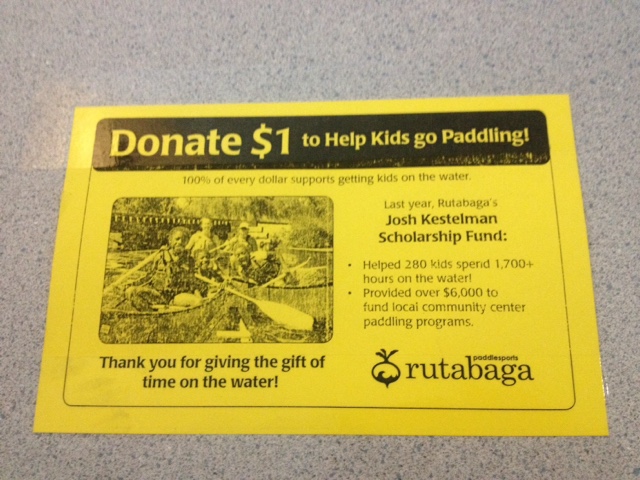 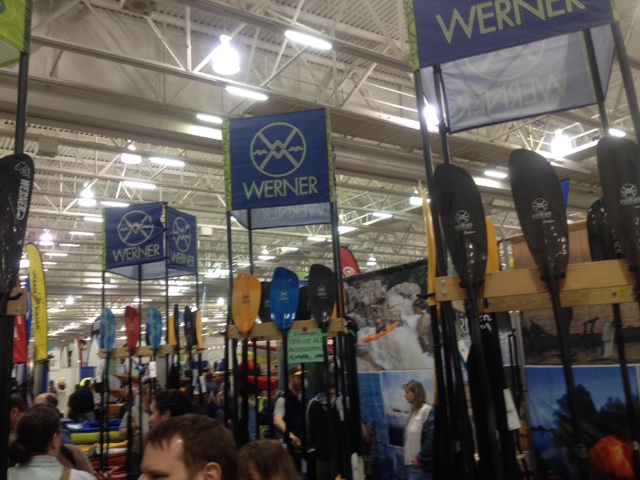 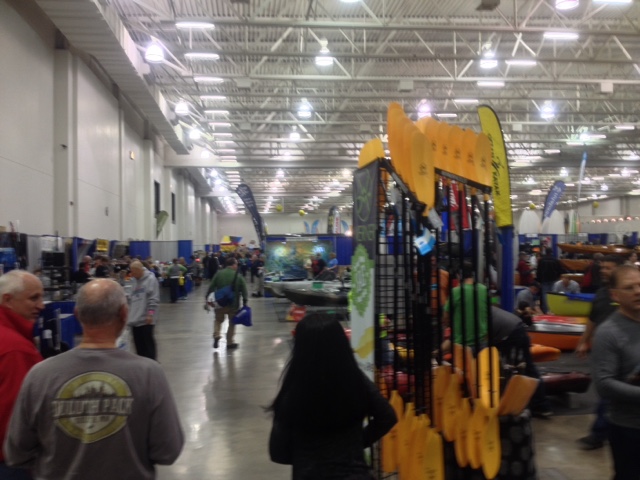 Turning around, we ran into legendary Midwestern whitewater kayaker Rick Klade. Back in the hairboating era Rick scored the first descent on many major drops in Wisconsin and the UP, as well as paddling rivers all over the States and Mexico with the likes of Jim Rada and Corran Addison. Klade’s Coffin is named after him. Rick still paddles hard, now in the company of his grandson Adam and the Kosir’s crew. We talked for a bit about upcoming Peshtigo River Festival {EDITOR’S NOTE: go to the events section on the Dirt Bag Paddlers Facebook page for more details} and the Spring boating to be had. We both remarked how many people in attendance didn’t even have the appearance of being paddlers, and maybe less than ten percent whitewater enthusiasts. I’m fairly certain I was the only rubber pusher there that day. 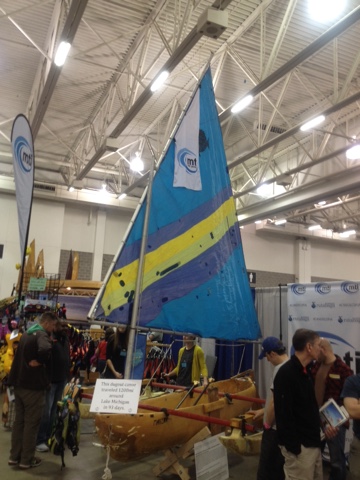 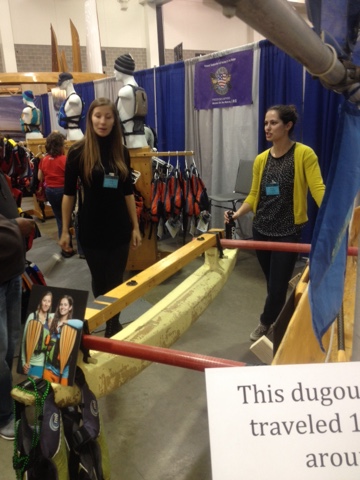 Next we visited the MTI booth and saw the amazing handmade dugout canoe MAKEBA, with full sail unfurled. I’ve enjoyed the presentation by Amy Lukas and Mary Catterlin on their epic 1200 mile circumnavigation of Lake Michigan at a previous Canoecopia, but I’d never seen the boat in person. Very cool! Look for an upcoming interview with these two amazing adventurers in an upcoming article! {lakemichiganinadugout.blogspot.com} 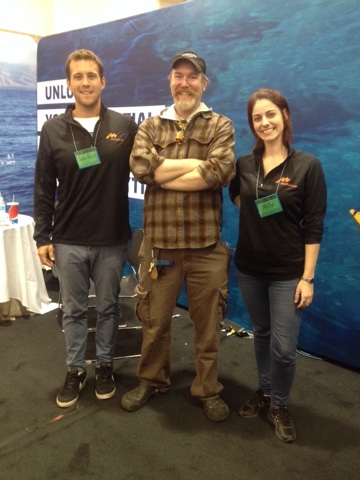 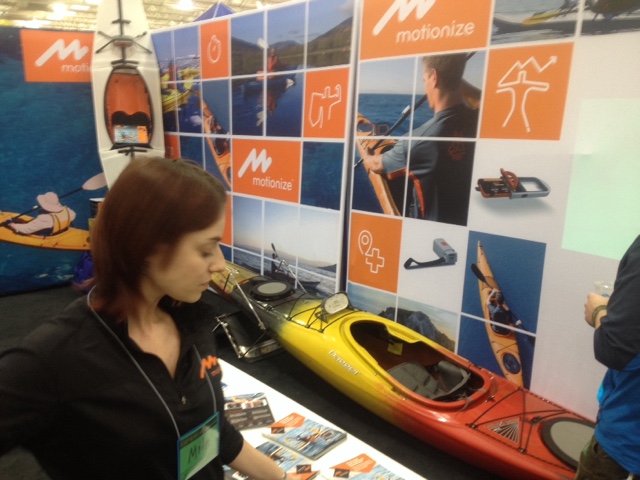 Just down the way from the MTI Booth we met Mila from Motionize. {motionize-inc.com} She thoroughly explained the cutting edge flatwater paddling technology. “Made for enthusiasts and professional athletes alike, Motionize Paddle is designed to drive performance based on personalized feedback. Amateurs will have more fun with less struggle. Athletes can work on shaving seconds off their times to qualify for races and win medals.” Angie was interested in how her clientele would like this instant coaching tool, and thought it would be very helpful. We met Sean Rice, an ICF Surfski champion from Australia working the booth, and he affirmed that Motionize had helped him tremendously in fine tuning his technique on long race paddles. 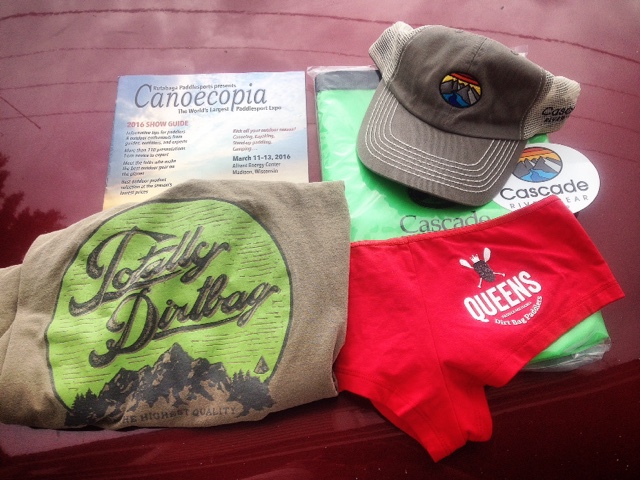 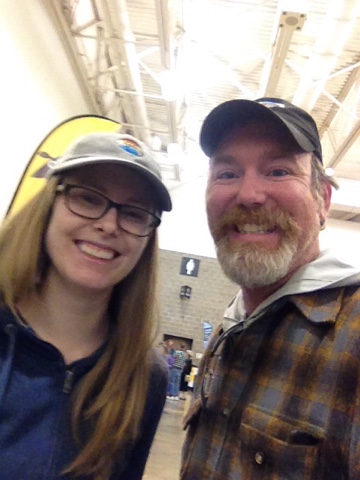 Beers drained and footsore, we made our way back to David and Kayak Chicago, where I had dirtbagged a spot on the display table to run a quick DBP giveaway contest. Up for grabs was a “Totally Dirt Bag” shirt from DBP Admin Rachel Elise {relisedesign.com}, a pair of DBP panties, a batch of stickers from lots of our friends, and a ballcap from our good friends at Cascade River Gear {cascaderivergear.com}. I drew a name from the ballcap, and awarded the spoils to Amanda from Illinois. We also met our neighbor Jamie Cooper from Sigurd Canoe Company {sigurdcanoeco.com}. He is a talented maker of handcrafted wood paddles, and had many unique designs on display at Canoecopia, the first show he had ever done. It was great hanging out with him before the show closed at 6pm. 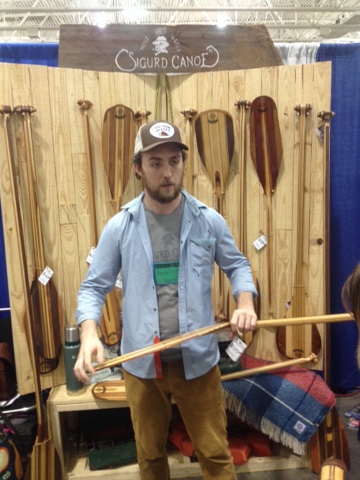 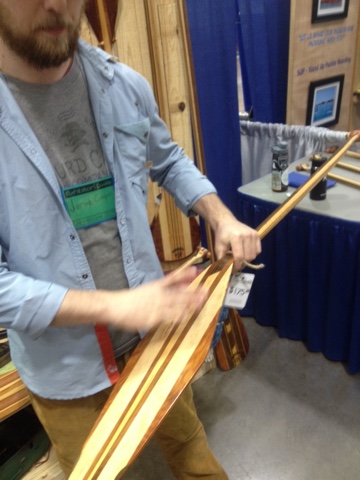 On the way out the door we ran into Craig Esposito of Team River Runner, {http://www.teamriverrunner.org} a nonprofit veterans organization that focuses on getting our heroes therapeutic time out on the water in a safe and exciting environment. Craig is a fixture in the Wisconsin whitewater community, and all around good -and busy!- guy. We talked for a moment, congratulating him on opening new TRR chapters in Wausau and Green Bay, before heading our separate ways. If you’ve ever worked a booth at a show you know how it feels to want to get away at the end of the day!! I’m sure we will see Craig again soon. 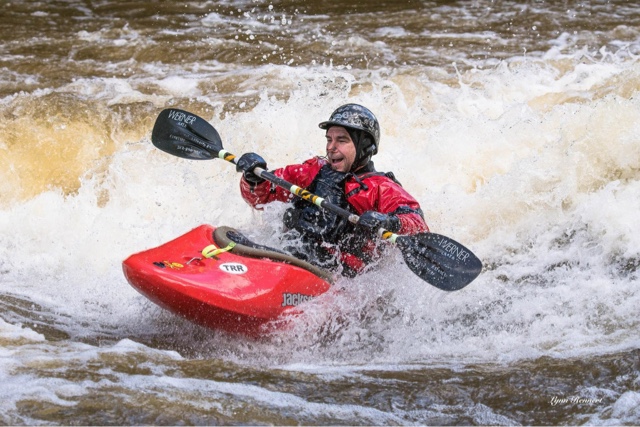 I was just about to hop in my CRV when I heard “Chicago!” yelled our from across the back parking lot. It was DBP Admin Willy Heindel and the boys from Kaukauna! We had planned on hooking up, but never ran into each other, a testament to the size of Canoecopia. We caught up and discussed plans for -what else?- paddling tomorrow, and our excitement over Pesh Fest. I told him I planned to meet up the following day with Dale #danewho Guarniere to attempt the first descent of the season of the Peshtigo. (We scored it, the earliest opening of the ice in recent memory, although I fell through the ice in the flats… but that’s another Wallace!) Willy told me about his young cousin who is an avid paddler and fisherman, and huge fan of Dirt Bag Paddlers. (He had a writing assignment from his teacher, Mrs. Wallace, that ended up being pretty funny… Stay tuned for an upcoming interview… ) Needless to say, as always, Canoecopia had once again whet the appetite, lit the fire, and announced the beginning of the paddling season in Wisconsin! That’s why we keep coming back year after year.