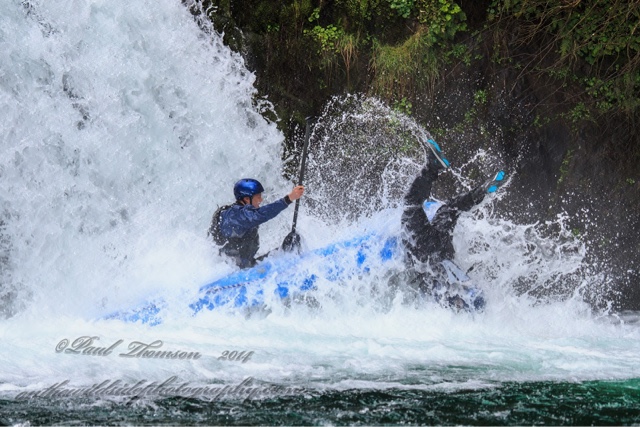 While not a kayaker or class V rafter, Paul “The Man” Thomson is as much a part of the team as anyone.  Born and raised in the Pacific Northwest, he has spent most of his life wandering the forest, deserts and coastlines of this beautiful region.  Having been a part of many first descents and unusual expeditions, he has captured everything from rafters descending the Skate Park on Summit Creek, to half naked kayakers going off of waterfalls under twilight. 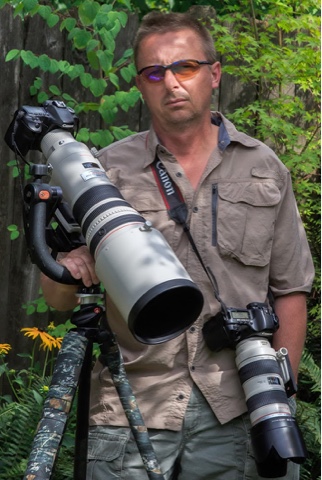 When I asked Paul if he would be willing to do an interview for DBP, he said, “Of course, but under two conditions”: it be conducted while camping with myself and “Kid” Cruser, and with a glass of good tequila each.  The following is what we uncovered as insight into Paul’s stimulating photography career.
P$- What is your favorite part of being a whitewater photographer? 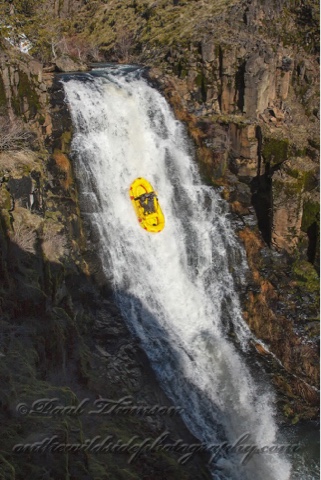 PT- I think hanging out with great people and getting to see some really cool places. Something I want you guys to know is that I really care about you all, and like today (we had gone to Summit Creek to check out the Skate Park and walked away), it is more about the adventure of being somewhere with great people. Even though no one ran anything today, and we didn’t get any photos, I am much happier with that outcome than someone running something they are not comfortable with and getting hurt.  We are all friends, and no photo is worth having someone seriously hurt for.
P$- Is there something you would like people to know, which they otherwise might not, about being a whitewater photographer? 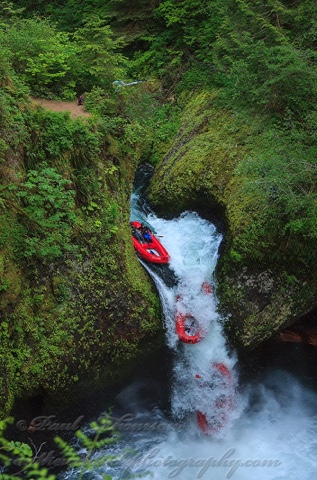 PT- When you go out to capture these events often times you are put into situations that are just as or nearly as sketchy as the boaters you are shooting. So you need to be prepared both mentally and physically for what you are doing. You are there to record the events, so it is important that you don’t become the event by getting hurt or needing to be helped by the boaters -thus jeopardizing the drop or trip. I also feel it is vital that you be willing to help out in any way you can as long as you can still capture the event. 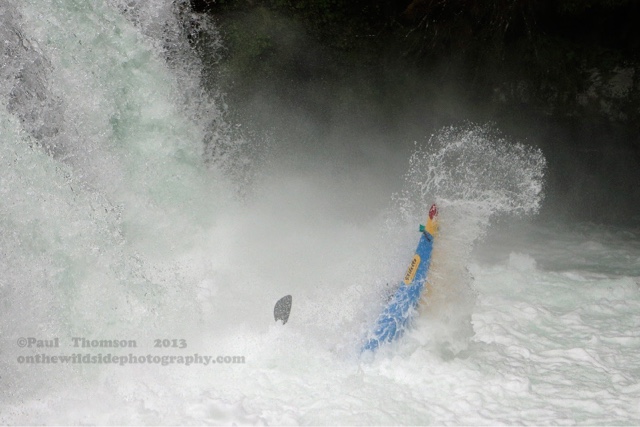 P$- What inspires you to find new compositions or styles of photography?
PT- I look a lot into other people’s work.  There are so many photographers out there that I really admire and look up to.  For example, if you go to Red Bull’s site, there are plenty of photographers doing new things to be inspired by.  Often with kayaking, especially with photographing waterfalls, sometimes you get what you get.  Thinking back to when Dan (McCain) rafted Money Drop, all you really see is a waterfall with a little yellow in the water (his raft).  So there has to be some ability to work with what what you have.
P$- What is your favorite type of shot? 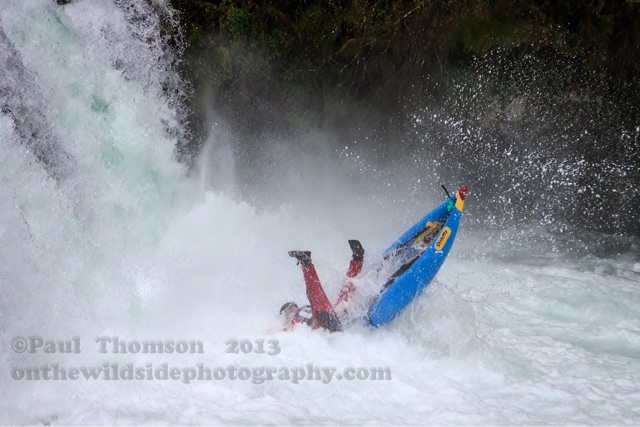 PT- I really like zoomed in and tight shots.  My favorite shot is one where you capture the kayaker or rafter right when they are breaking the water off of a drop and after they resurface.  You get to see all kinds of facial expressions.  Zooming into people’s faces gives you some really great stuff.  I remember at the Northwest Creeking Competition last year (2015) there was one guy riding the bull on a raft off of the falls and the shot I got of his face just looked like he had chomped on a big turd.  Man it was great.  For simple drops like Sunset, that’s just the greatest, to capture the facial expressions of the boaters. 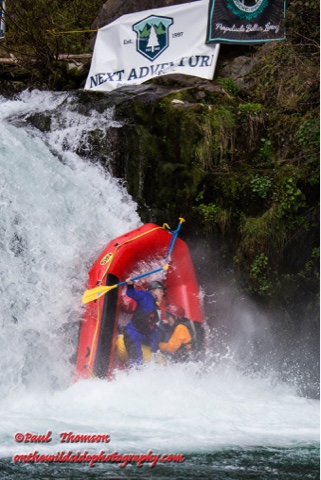 Another story I can think of along those lines is when the rafters were running Eagle Falls on the Skykomish River.  They come through the first hole, and the look on Dan’s (McCain’s) face as the wave breaks over him, oh you can see he knows what’s coming next. 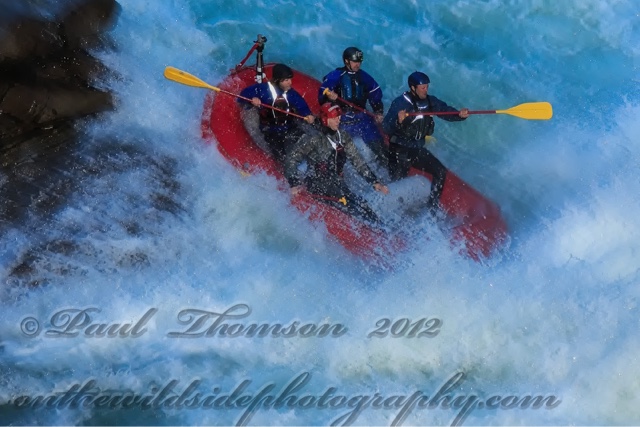 Jeff has this big smile on his face and his tongue out of his mouth looking like he is having the time of his life, and Dan is hanging on for dear life. 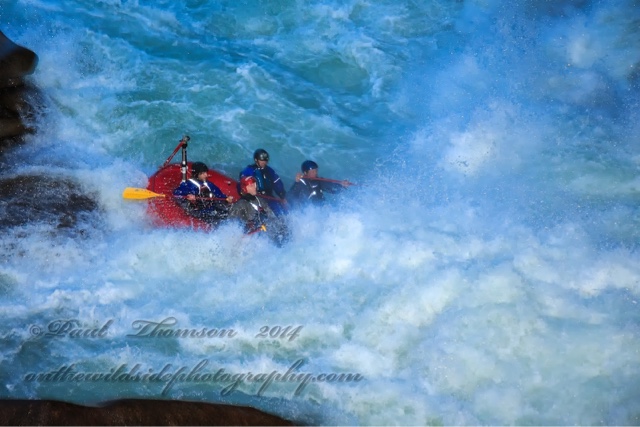 The next photo is them busting through the last hole, eyes rolled in the back of their heads. 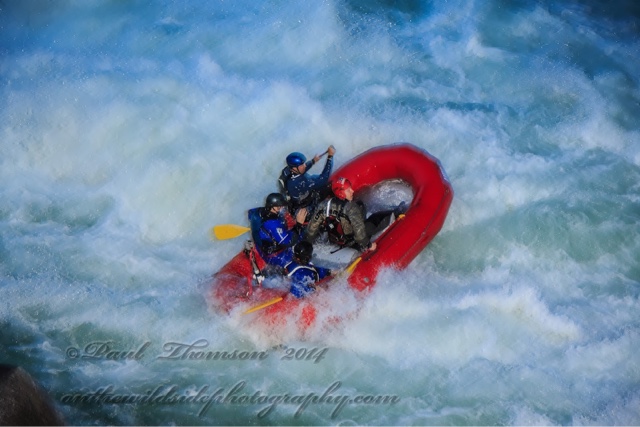 That was a drop that people had considered un-raftable during spring runoff.  I remember when they were looking at that drop another time, some local was saying, “Ah… if you want to raft you are going to need to go to Wenatchee or something like that.”
Jeff (Compton) asks him, “Well what about this?”(Looking at Eagle falls from the road), “What about Eagle Falls?”
And the guys says, “I might be f***ing crazy, but I’m not stupid!”
Clearly he didn’t know whom they were talking to.  They all start laughing, and the guy asked why they were laughing, and Jeff says, “What would you say if we said we had run it last week, at nearly dark?”
And the local guy says “I would say you are a f**ing liar.”
And then I say, “I have photos to prove it.”
The guy says “You shouldn’t tell anyone around here, because they will throw you in jail!”
Turns out that the local authorities believed that section of river to be un-navigable and there was a big sign saying so just off the road.  The last thing we all did there was an interview with Team Sawyer with a big spotlight on the sign that said it was un-runnable.  Haha. 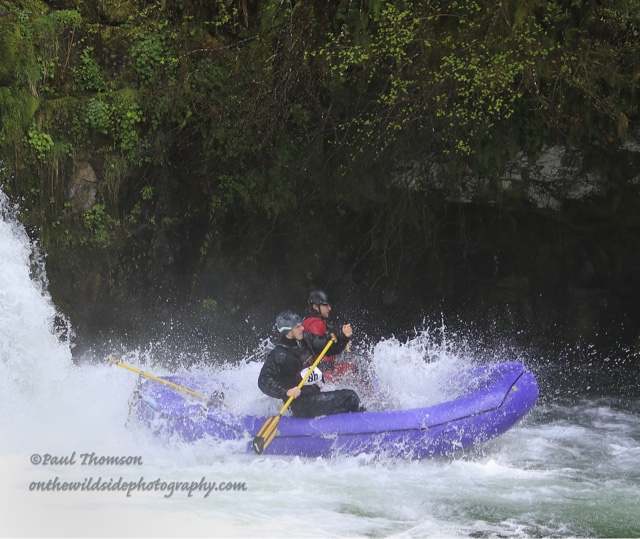 P$- Can you tell us about a particularly memorable story behind a photo? 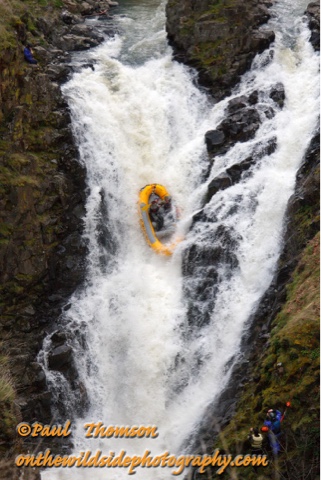 PT- I remember all of us going to Upper Lewis Falls and Jacob “The Kid” (Cruser) forgot his life jacket.
Jacob said, “Sorry guys, I forgot my life jacket, I’m not boating”.  The funny part was, he was the only one who knew any of the lines.
I remember at Taitnampum Falls, we are watching Gene, and he is going the wrong way.
Jacob: “I remember telling him specifically to go over the boof flake, and not to listen to Dan.  The problem was, is Gene didn’t know what a boof was, let alone a boof flake.  So anyway, he listened to Dan and ran it the wrong way.  Then we got to see Dan run the upper falls, and break his hand, and then decide to R1 Lower Falls, which none of us knew he was going to do at the start of the trip.”
PT-  “I remember trying to get my camera ready and looking at Ben, his R2 partner, who was out of the raft and looking at the falls from above, and seeing him thinking I had plenty of time.  The next thing you know, after I barely had gotten my still camera out, but had not set up, was that Dan had already run the falls by himself, and with a broken hand!” 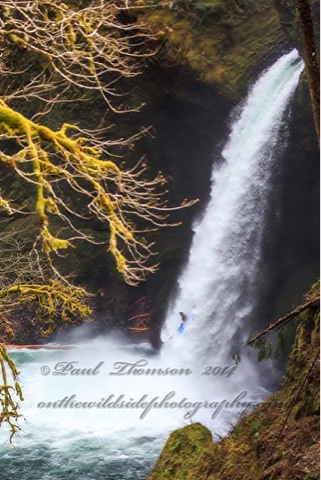 P$- What is the next whitewater trip you would like to take?
PT- What I would really like to do is a Grand Canyon trip with all the rafters, and with all you guys, the whole group.  Do a real one too, a full 24-day trip.  In just a few years I’ll be retired, and I can go on trips anytime and anywhere. So let’s start putting in for permits.

See more of the world through Paul’s lens, visit his website-http://www.onthewildsidephotography.com/
DBP Admin Priscilla and Jacob paddle their area extensively, and participate in the publishing of an awesome blog chronicling those missions, INTO THE OUTSIDE-
http://mthoodh2o.blogspot.com/?m=1