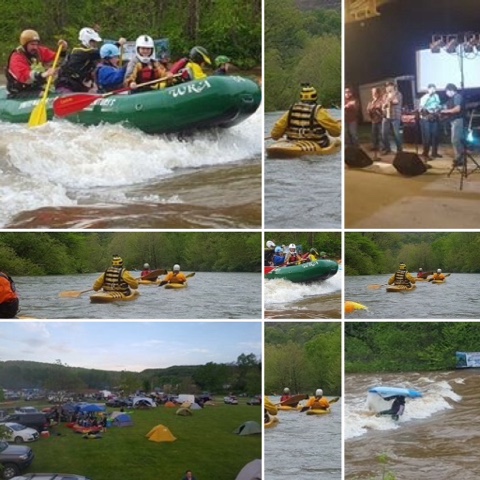 Johnstown, PA is probably most known for its devastating flood in May of 1889. However, nearly a thousand whitewater enthusiasts flocked to Greenhouse Park in Johnstown this last weekend for the Stonycreek Rendezvous. And though this festival typically relies on a dam release for solid class lll rapids, this year had a little extra.
Steady rain from Friday through Sunday  provided campers at Greenhouse Park with plenty of lakefront property. Though most people of sound mind would call such a weekend a washout, the rare breed of whitewater enthusiasts proudly walked, hopped, danced, hula-hooped, trotted and splashed through what I had dubbed Greenhouse Pond. At levels between 5ft and 5.3ft on the Ferndale gauge, the river was full of adventure for boaters of all styles. 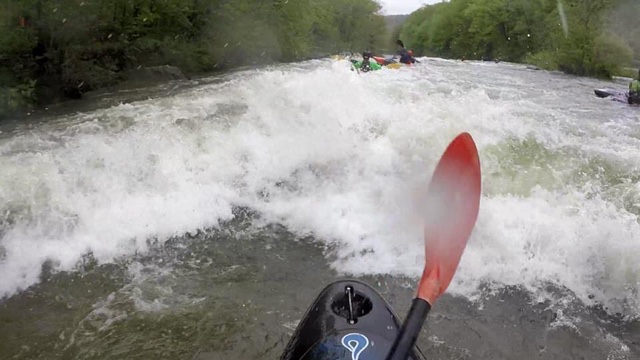 The Stonycreek Rendezvous, hosted by the Benscreek Canoe Club, is essentially a three day celebration of whitewater. Camping starts Friday morning along with live music, food, and of course plenty of vendors.  I have learned on my short journey in kayaking that though each festival has similar events, each also has some aspect that sets it apart from the rest, and Stonycreek is no exception. A play wave at the festival grounds is its special feature. As with most festivals, Stonycreek Rendezvous hosts two races, the lower gorge section on Saturday and the upper canyon race on Sunday. And with the play wave accessible to everyone, there is also a fierce rodeo competition and a king of the wave competition. 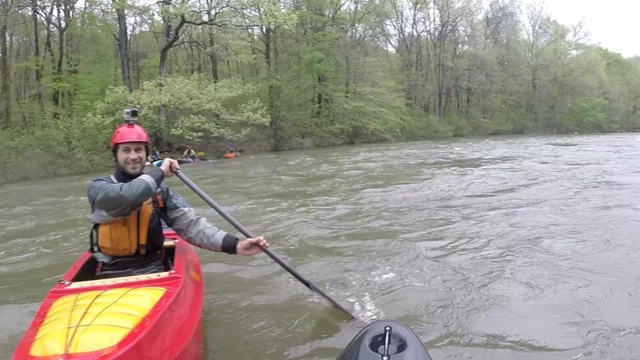 For the serious paddler, arriving as early as possible on Friday is a must. Who can resist a few hours on a play wave then catching an afternoon dam release to start the weekend off? Saturday, the official start of the Rendezvous typically sees an early morning release. This year however the rain came down all of Friday night, keeping the Ferndale gage at 3.6ft Saturday morning. By 10am, most paddlers were gearing up to catch the bubble from the dam release. 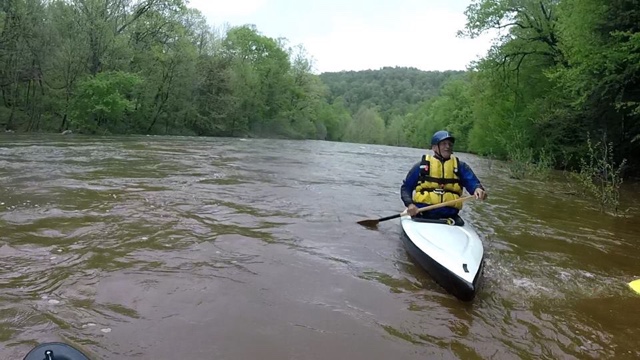 Knowing that this creek is guaranteed water, I did not think it necessary to check the levels. So off to the canyon put in it was, expecting typical levels of about 4ft. As soon as I punched the first hole on the first rapid – Showers – I knew immediately that the water was without a doubt bigger than my first trip a year ago. The gage was about 5ft at that point and provided plenty of entertainment and one hell of a rowdy ride. The river was full of big, long wave trains and raft stopping, kayak munching holes. And I know this first hand. At some point I paddled straight into a stalled out raft rigged with oars and found myself stuck in the hole I was trying so desperately to punch through… Ultimately leading to a swim. Then not long after, I found myself stuck side surfing a meaty hole until that same raft bumped me out to freedom. With the water at nearly 5.3 ft there were wallaces to be enjoyed on nearly every rapid. 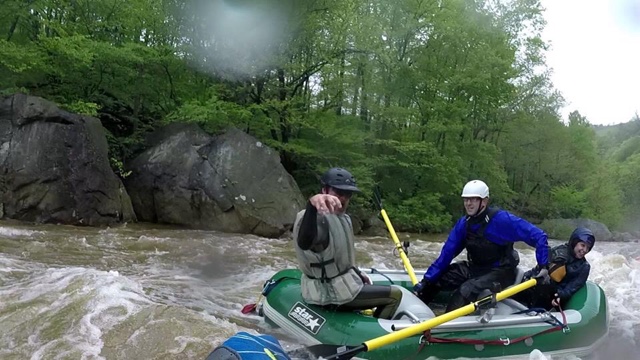 As a boater and writer I often have to make the difficult choice of paddling or covering an event to share. Often I choose to paddle. (Can you really blame me?) And Saturday was no exception. Being on the water, I missed the start of the boater-X race but I did make it back in time to catch the last few rounds of the advanced rodeo. The competition was indeed stiff. With natural flows near 3000cfs, the play wave at Greenhouse Park proved to be plenty deep enough for competitors to throw some big air moves. The fast moving water, however, made for what seemed a difficult king of the wave competition. Only 4 boaters and a sup were brave enough to attempt to battle each other, but all found it difficult to hand paddle onto the wave. 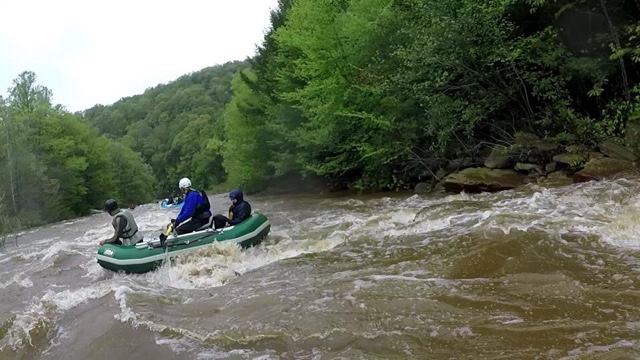 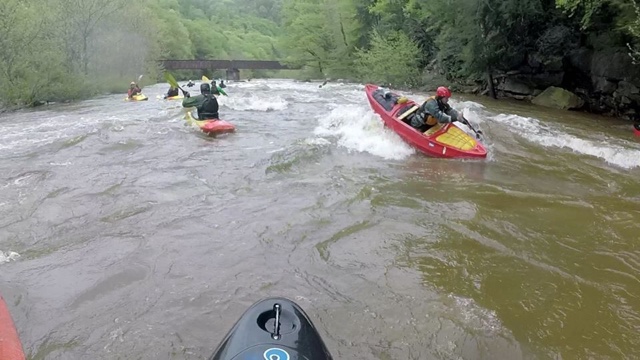 Saturday night at Stonycreek moves into overdrive as boaters come together to surf under a spotlight to dance music, known as “surfing under the lights”. Or they enjoy live music under a pavilion with drinks, food, and wild stories of the day’s paddle. And when the live music ended, the party kept on rocking with a dance party. And though Greenhouse Park is small enough to hear the music throughout, there was no shortage of party goers willing to get wet for some good times off the river. 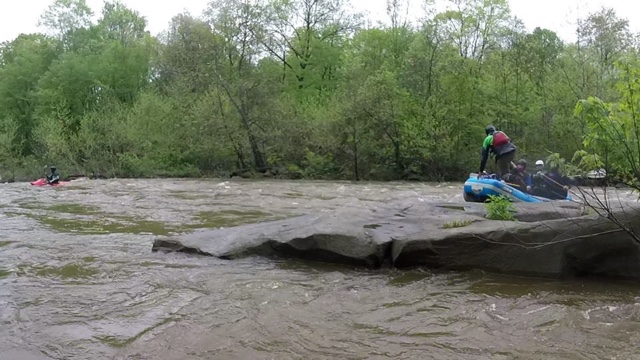 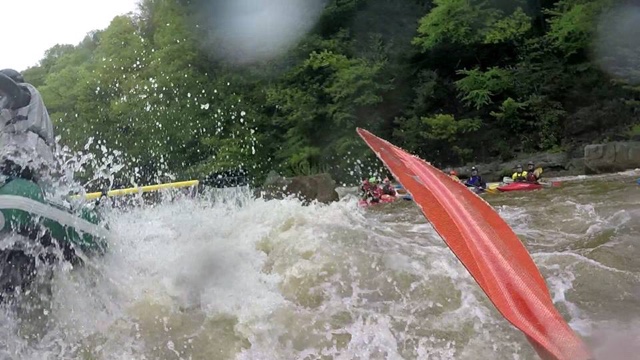 EDITOR’S NOTE- Jay aka “Moonshine Kayaker” is a frequent contributor to DBP MAGAZINE ONLINE. Here’s a few links to some of his work:
Covering Cheat Fest 2016-
http://dbpmagazineonline.blogspot.com/2016/05/cheat-fest-recap-high-water-dirtbaggin.html?m=1
A bad winter swim-
http://dbpmagazineonline.blogspot.com/2016/01/a-dangerous-winter-day-on-chug-with.html?m=1