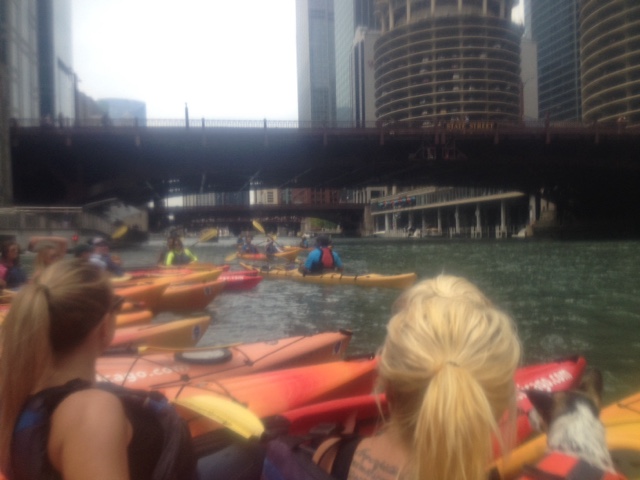 I love nothing more than being on The River. Put me in a kayak, paddling with my wife Nikki and a few good friends on a beautiful sunny holiday weekend, deep in a canyon, the water lapping against my hull as we pause to enjoy the moment before setting off again… That is my Shangri La.
Even when the “canyon” is made of steel and glass, towering high above, constructed by Man. What, you say? Yep, I’m describing a guided trip a few weeks back taking in the Independence Day celebrations on the Chicago River. 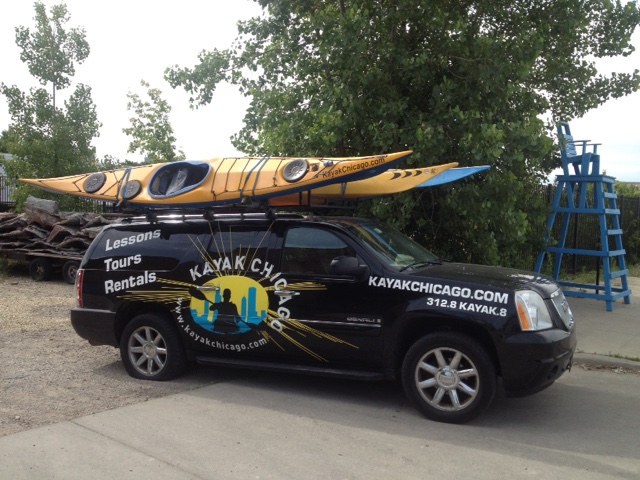 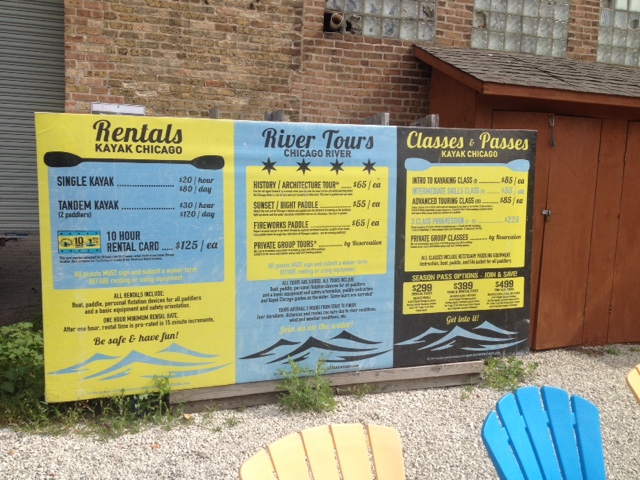 We decided to take the train to Chicago to enjoy the architect tour offered by Kayak Chicago. These guys are true dirtbags at heart. I’ve paddled whitewater many times with their crew all over Illinois and Wisconsin, and two of their senior guides, Todd Schaffer and Brian Kretschmer, are longtime DBP Admins. “Kretch” summed it up best when he said, “KC is the best because of its staff. Great people and a great atmosphere. Always friendly and always ready to have a great time. Plus, our guides are well trained on paddling techniques and safety. If you want a great experience on the Chicago River, there is no other place to go than Kayak Chicago.” 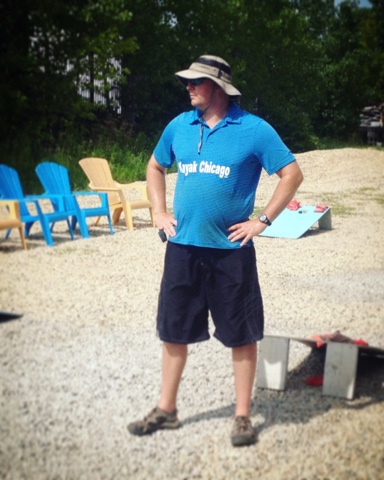 Kretch before the trip 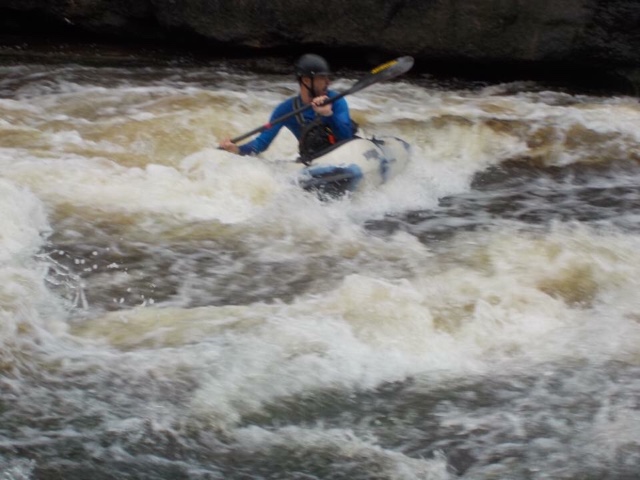 Todd on a recent private mission on the Wolf River in Wisconsin
This would be our third time paddling in the city, and all three adventures were unique experiences that we highly recommend. Our first visit to Kayak Chicago we took the fireworks tour, paddling a tandem kayak from their private put in on the North Branch of the river through downtown to watch the sky get lit up by Navy Pier. We went out with the Kosir’s Rafting family, just back from some epic Class V Gauley Fest action in West Virginia. Yet there we were, tightly gripping our paddles as the big boats bounced waves off the iron corrugated walls of the river channel. The lights of the city were beautiful, and I recall the Tribune Building being a spectacular sight. We all really enjoyed the trip. 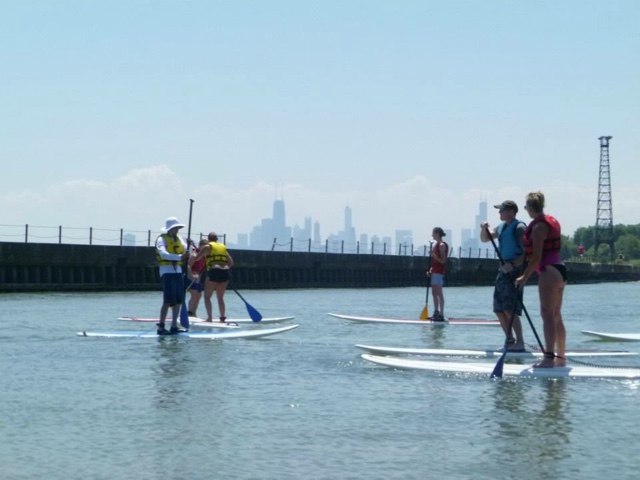 The second time we went with Kayak Chicago was two summers ago, when Nikki and I again took the train, this time traveling to Montrose Beach to do some Stand Up Paddling on Lake Michigan. She had done some SUPping before, but this was my first time. About a half hour into our tour the lake grew choppy despite it being a brilliant sunny summer day. I must have Wallaced a hundred times! I’d get two or three strokes in before toppling into the drink, and was reduced to paddling on my knees in order to keep up with my wife. It was a humbling yet exciting trip, one that definitely wore me out and gave me a newfound respect for the SUP boarding dirtbags of the world. 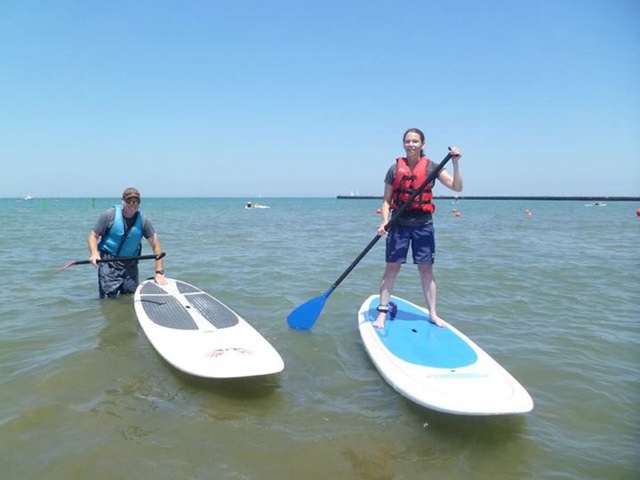 Wallace!
This time Nikki and I took the train to Clybourn and walked the fifteen minutes over to the North Branch launch again. We said our hellos to everyone, and we’re very happy to see that both Todd and Kretch would be working the trip along with my good friend, head guide David Plascencia. We got outfitted with the rest of the customers as David and the boys gave us a top rank safety talk. We quickly got out on the river to enjoy 2 ½ hours of fun. 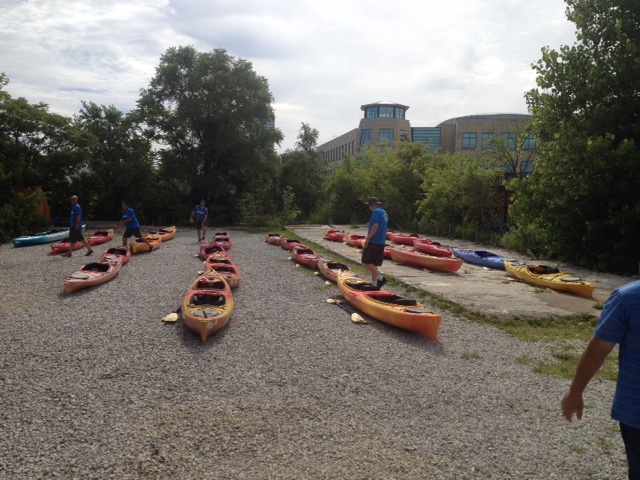 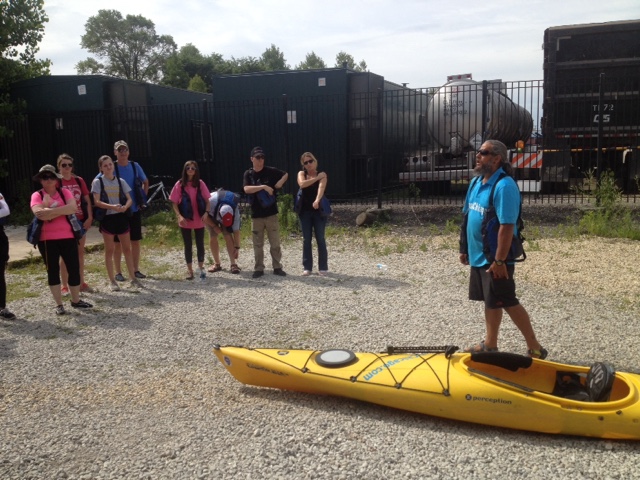 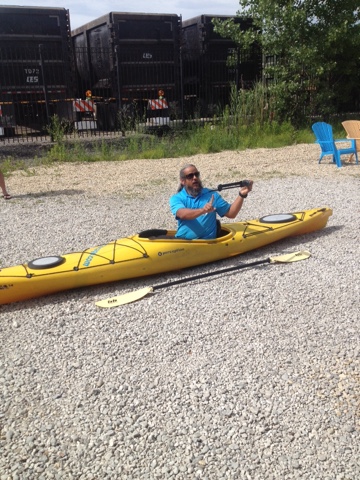 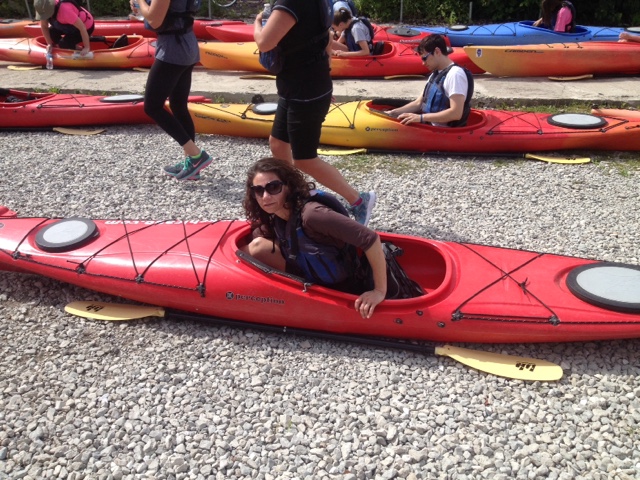 Nikki getting outfitted
Kretch gave the first presentation of the tour, teaching us all about the world famous Chicago Bridge, a small moveable bridge invented here and powered by a small motor the size of a lawnmower engine. Did you know there are more moveable bridges here in Chicago than in any other city in the world? Kretch then slipped into the sweep position for the remainder of the journey. “As the sweep,” he told me, “I’m bringing up the back of the tour. I can see almost every guest and it allows me a viewpoint to make sure each guest stays in the safest place on the river. I can see large boats coming from both the front and back of the tour and communicate that to the other guides.  And, a tour with me in the sweep position is like a mullet, business is the front and party in the back!” 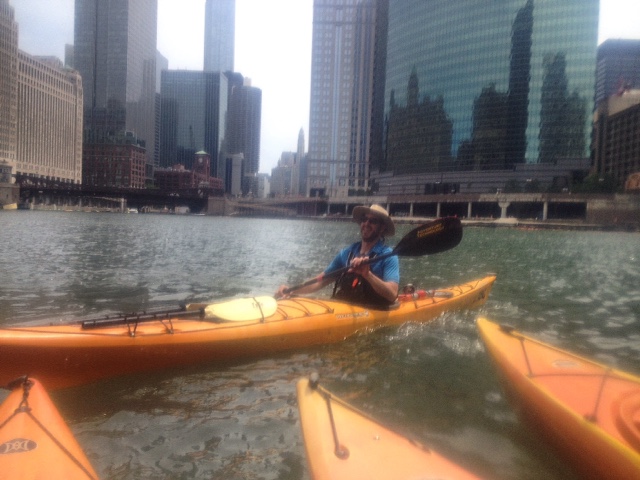 Todd on the River
We continued along past historic Goose Island to the heart of downtown, stopping every here and there to rest, regroup, and learn about the amazing architecture of the city. Todd told the trip a lot of interesting details in between super corny jokes. “I’m curious, so I read and ask old-timers that I meet to share knowledge and stories. I grew up in the Chicagoland area, so some history has just accumulated in my head,” he told me. “I was a volunteer canoe guide one summer with the Friends of the Chicago River, kind of an environmental watchdog/community-outreach group for the river. They really led the charge as far as connecting city residents back to the river over the last 30+ years, they’re a great group and I learned a lot from them.” 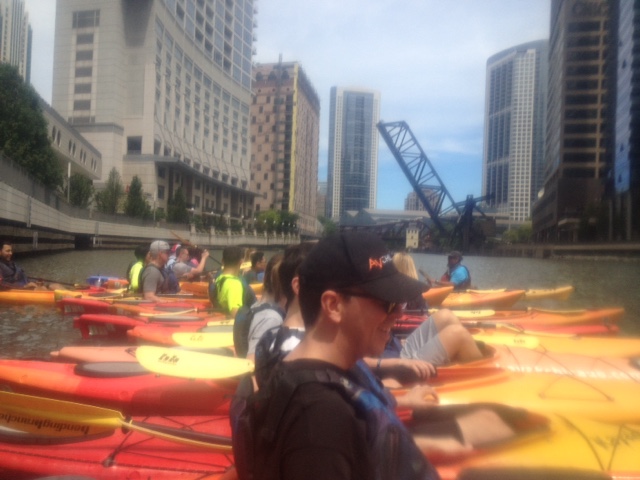 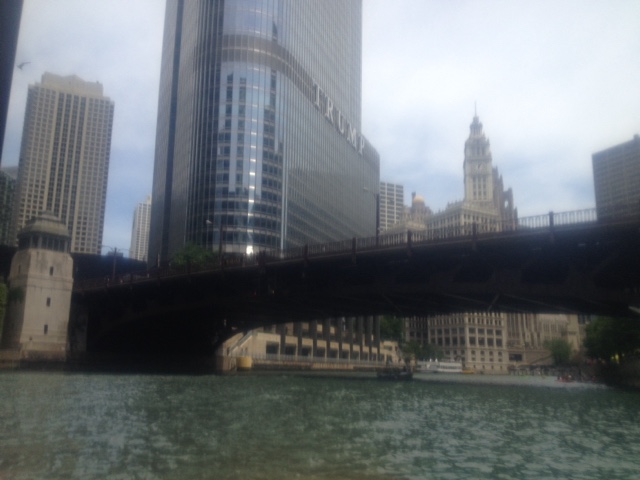 We stopped in the shadow of Trump Tower to reorganize and head back upstream to the launch under David’s leadership. The Chicago River is slack enough that paddling upstream is as easy as heading downstream. The Main Branch is much clearer than the water of the North Branch because of the lake and the engineering feat that reversed the flow of the river to improve water quality, done in the heyday of the industrial revolution. We shared the river with many big boats on that busy weekend, everyone smiling and enjoying a bit of nature in the heart of one of America’s biggest cities. This tour was my favorite Kayak Chicago adventure yet! (Until I take my next trip with them!) 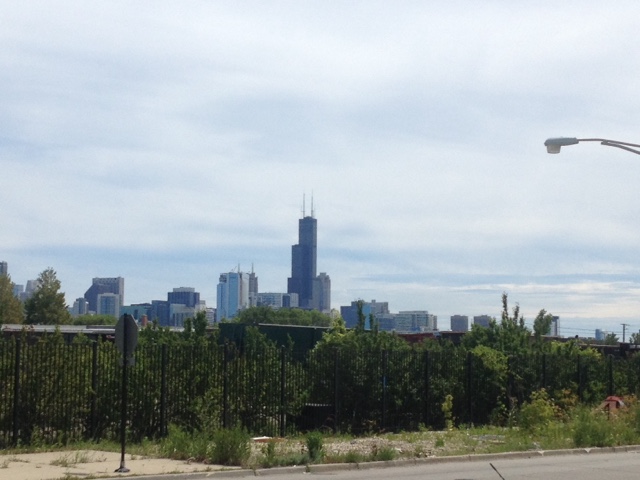 What makes paddling with David, Todd, Kretch and everyone at Kayak Chicago so special? One thing is the scenery. Chicago is a magnificent city, clean and urbane, with a vibrant riverfront filled with the smells of restaurants cooking, and the sights and sounds of people enjoying being outside. The gear is top notch too. But most important, I believe, is the guide staff, all of them true dirtbags. Like Todd says, “I love everything on the water- whitewater, surfing, touring, expedition paddling, EVERYTHING. I don’t really compare them, I just love the great experiences that all paddle sports have to offer.”
You can also rent boats and boards by the hour of guided tours aren’t your thing. For more info, check out our friends Kayak Chicago-
kayakchicago.com