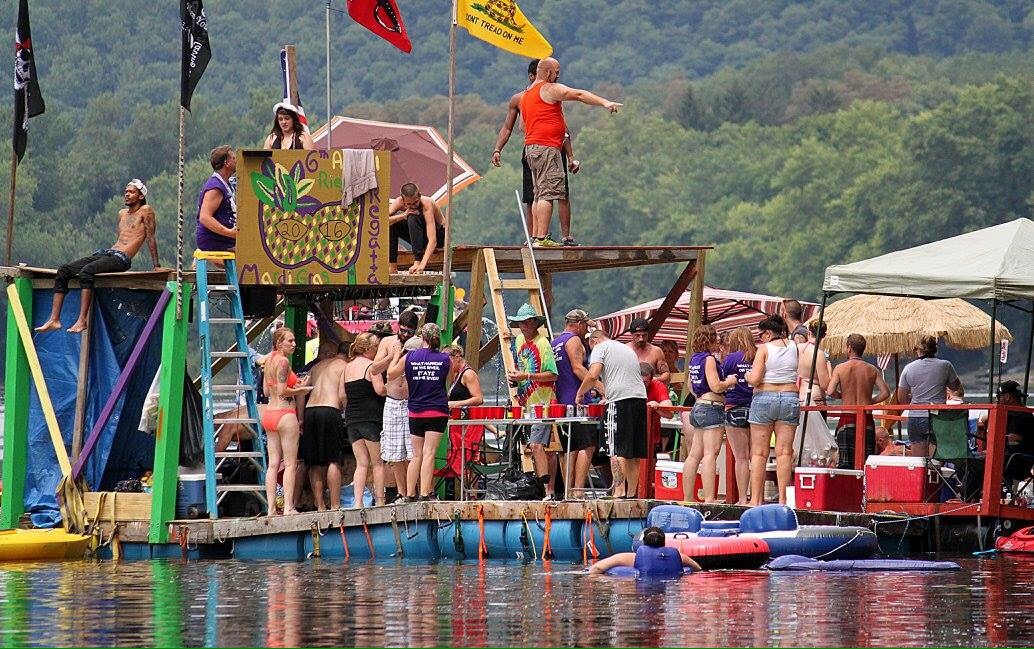 From a handful of rafts in the beginning with about 20 people to more than 20 rafts and dozens of kayaks and canoes, the Rieger Regatta has grown to hundreds of people coming out to enjoy a long day’s float relaxing on the Susquehanna River. My friend Jeff Rieg started the Regatta, the main focus being home made rafts made from barrels and tire tubes floated down the river from Hickories Park in Owego, New York to Nichols, New York, about a 15 mile paddle. The idea was to have fun, leave all your worries and drama on land for the day, bring food and beverages, listen to music, enjoy the scenery and just relax and be happy. 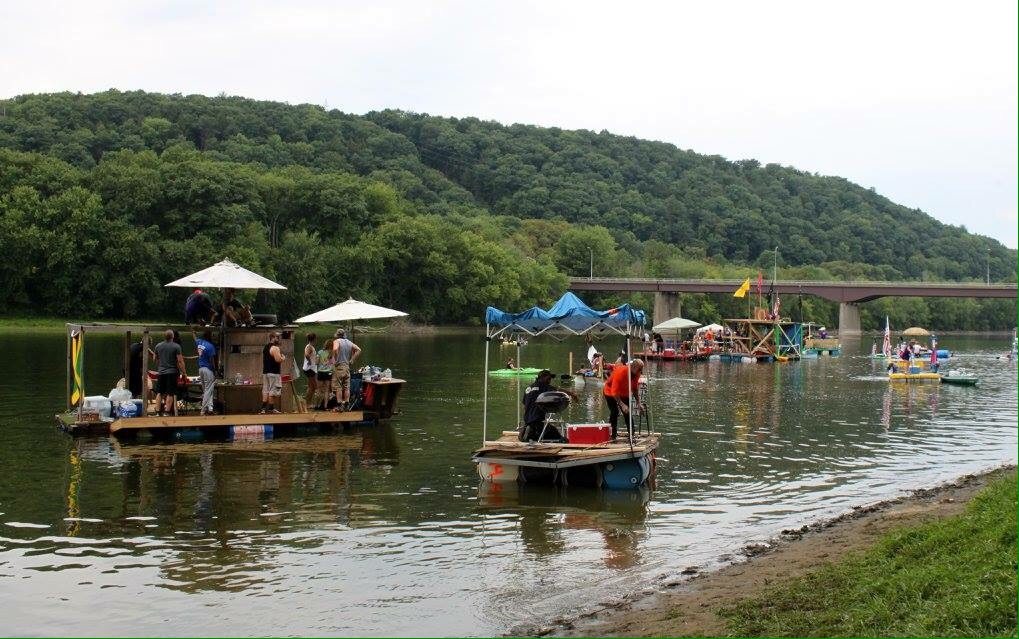 Since it’s debut in 2011 the Rieger Regatta has taken off, almost doubling in size each year. Old friends from out of state save “Vacation Time” to come back home to Owego for this now. Jeff came up with the Regatta Slogan, “What Happens on the River Stays on the River.” Melissa (my hillbilly wife) and I have been helping out and shooting pictures since the beginning, picking up trash left over at the starting point and cleaning up a bit before heading downstream on land to get more shots of all the Happy Rafters as they pass through our small village of Owego. 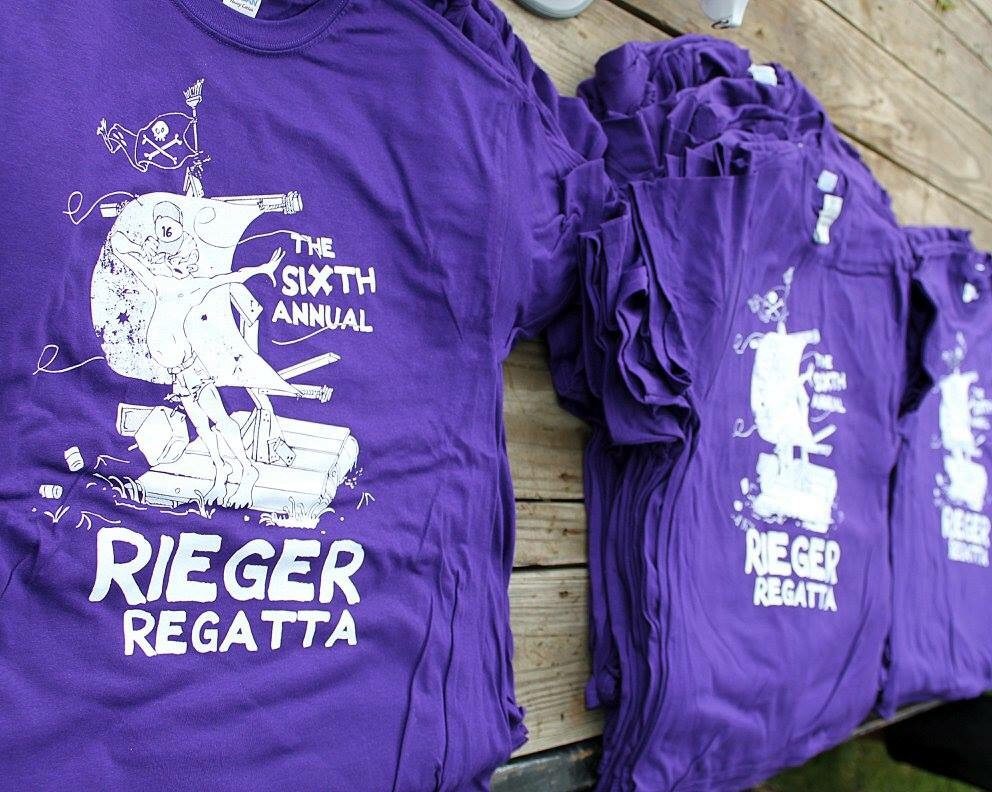 I guess I would describe myself as a spokesperson/photographer/promoter of the event; every year along our journey on land we meet people that have come out to watch all the colorful rafts and people the float on by. Most people say about the same thing, “Wow that looks like so much fun”, “I have to do this next year” and occasionally, “I wish I would have made one this year.” In 2014 more than 30 rafts and an estimated 500 people “all came out” with kayaks, canoes, and blow up inflatables, making it the biggest year yet. 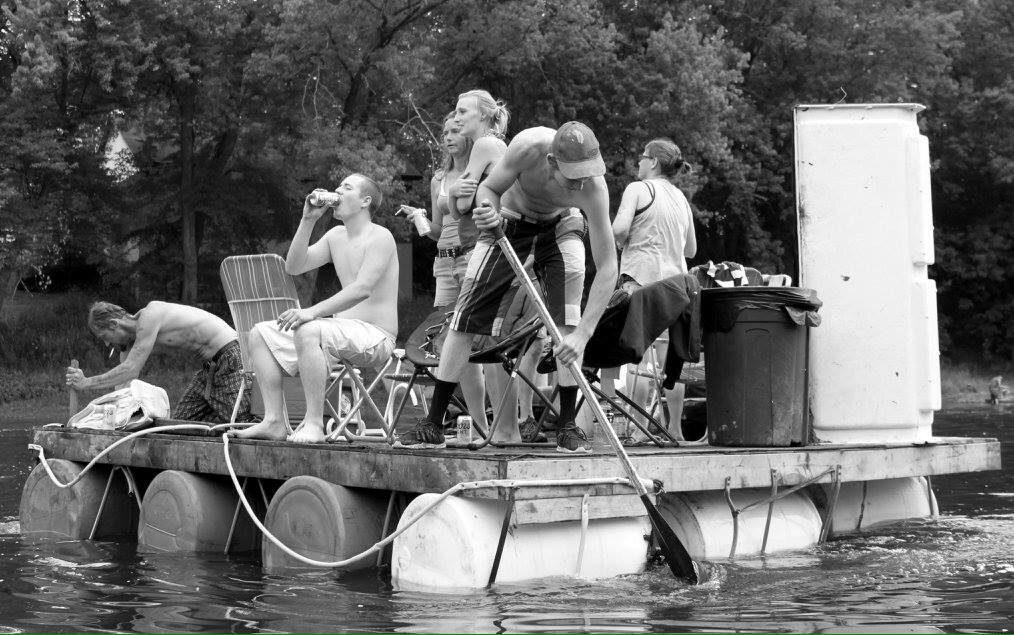 Even last year’s high winds didn’t keep people from showing up and having a blast. With the large double decker “Party Barges” and the smaller raft’s sun shade “canopies” attached like sails in the high winds, it just made the day more interesting and challenging. As the rafts floated down a little ways the winds would pick up and blow them all back towards Hickories Park near the start. They all still had a great day, with Jello shots and cold drinks, BBQ grills and lots of food.

The entertainment is endless, either watching from shore or enjoying the river. Out of the six Regattas, this year was my first time out on the water with my kayak. This July “other I” was brave and took my $700 Canon Camera out with me on my kayak. Although the day was overcast to start, with rains coming half way through the day, “Had to put my camera away” I still managed to get some awesome photos of everyone having fun. Overall this year was another awesome year, and I saw some new stuff like a floating snowmobile and a BMX bike jump ramp off a raft and into the river. Watching all the Happy Rafters getting out of the river is also a blast. By the time they get to the end in either Oswego or Nichols, everyone is pretty “relaxed” from the cocktails and all day party. 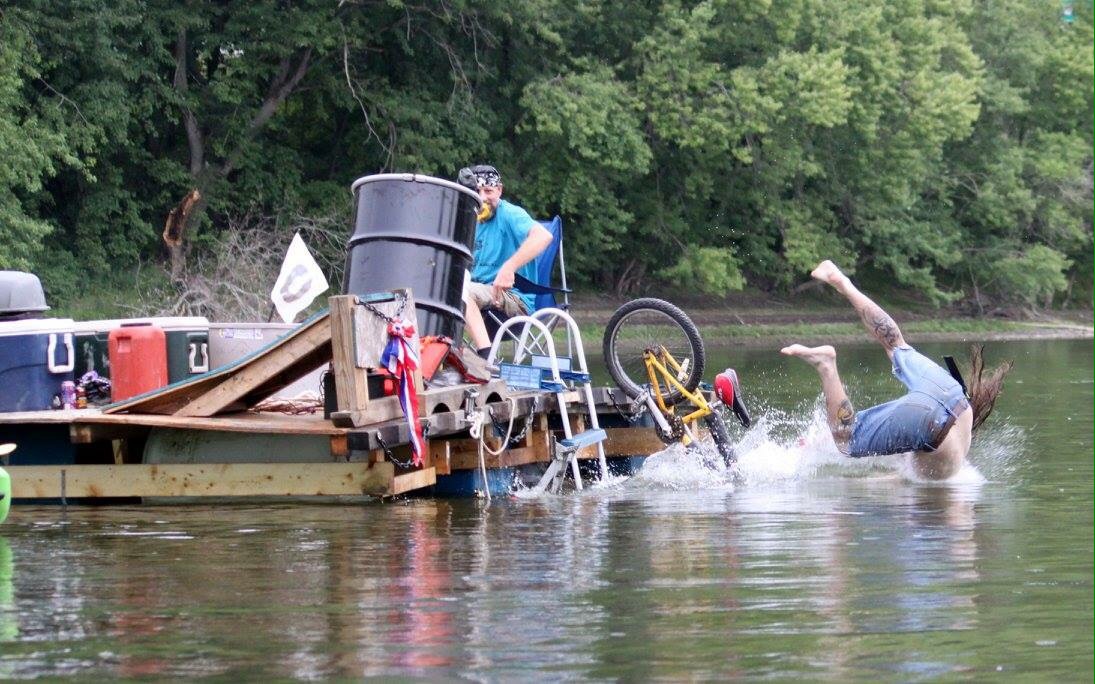 After the 4th Rieger Regatta, Jeff and I talked about getting the rafters all back together for a camp out at Hickories Park. I called it “Raft Stock” in a Facebook event and the name stuck. It makes for an exciting weekend of #Wallace, staying up all night playing drinking games, meeting and making new friend, chatting about the Regatta, and starting to plan next year’s fun. See you at the 7th Annual Rieger Regatta!

I’m happy to run across this page. I really appreciate your work and I can’t waiting for your further posts. Thanks!