In November 2016, I informed my family and friends that I would be travelling to Mexico the following month, alone, to SUP whitewater in unknown rivers, unable to speak a single word of Spanish … other than ‘hola.’ That’s insane, I heard. Too dangerous, people told me. But the DC kayakers were supportive and simply responded, “Get travel insurance.”
My excellently supportive husband, a whitewater kayaker, researched information about Veracruz — my destination. At one point, he sent me a link to the book, “A Gringo’s Guide to Mexican Whitewater,” by Tom Robey. It looked perfect. I’m a gringo…or gringa…I’m going to Mexico, and I’m paddling whitewater. But when I clicked the link on Amazon, they were selling the book for $1,644.37. I’m screwed, I thought.

Here I am at the take out on the Rio Antigua

Fast forward a month, and I end up having one of the best stand up paddling experiences of my life. The whitewater was warm and fast and big, the surf was sweet, and the people and food were amazing. When I returned home, I received a super kind message from Aaron Koch, who had been SUPing Mexico for years, congratulating me on paddling some awesome rivers in Veracruz. He then wrote about his friendship with Tom Robey, who had paddled Mexico extensively. I need that book, I thought.

I googled the author’s name, found his email (yes, stalker-y) and asked him why his book was selling for $1,644.37 on Amazon. He replied quickly, explaining how folks were trying to profit off of an out-of-print book, but that he built a website, mexicanwhitewater.org, to sell “A Gringo’s Guide…” So, for a much more reasonable $16.95, I purchased the book and asked him to sign it, which he did and I was honored.

So here is the review: The book is great. The book is poetic. The book is pre-GPS and old-school in descriptions and photos. You will find fantastic directions such as, “After quite some distance you will come to a big insect nest in a tree. Continue past the nest keeping left, and soon you will see an abandoned tractor.” (p.137) Or, “Looking downstream on the Gallina one can tell that the end is near by the appearance of a small hill straight ahead, in front of which a plume of mist rises mysteriously.” (p.52)

Then there are the brilliant descriptions of Mexican whitewater races: “When they saw it during the parade before the first day’s racing, the locals christened my boat “the ugly cockroach” and asked me if I could swim. I was busy duct taping both my kayak (for reinforcement) and one of my competitors, who had asked me to attach foam blocks to his body as a makeshift lifejacket.” (p.27)

Of course Robey could not possibly omit how Mexican law enforcement may affect the river runner: “The usual procedure in a serious accident in Mexico (especially the fatal kind) is to throw everyone in jail until the mess can be straightened out. Car insurance allows you to get out of jail.” (p.11) And in Chiapas, “The lack of effective law enforcement creates serious risks for river runners. Almost all groups have encountered strong arm robbery. Apparently three American boaters were shot in 1997 but survived.” (p.128) 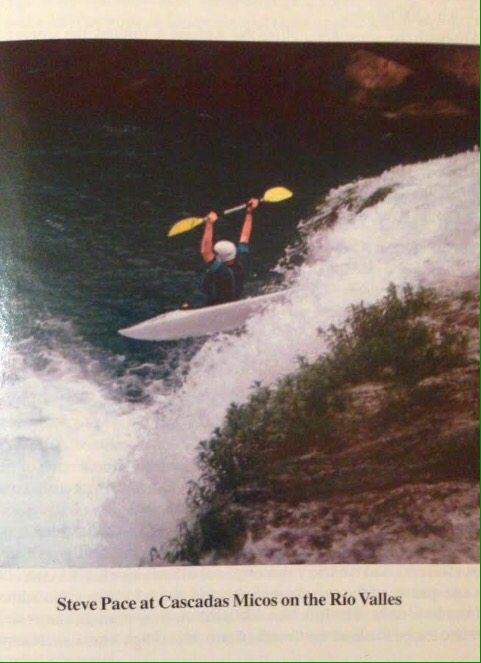 In “Gringo’s Guide to Mexican Whitewater,” each river — and there are about 40 rivers described from Baja to Chiapas — features a recommended put-in and take-out, length in both kilometers and miles, average gradient, and median flow. This information appears in a grid immediately above the specific river descriptions and the river locations appear in topographic maps throughout the book. The river descriptions themselves are wonderfully colorful and specific. In describing the Fourth Canyon of the Santa Maria, Robey writes, “Passage through the falls is quite an experience: a small logjam of polished wood, usually formed just upstream of the cascade, must be crossed. Then one must ferry across the the cascade with its strong, buffeting winds which can easily flip an unwary kayaker. The falls kick up a chop in the river with blinding driven spray. It is very difficult to gauge the ferocity and determine whether the falls can be run unless someone has paddled through them.” (p.78)

The best part of leaving Mexico was knowing that I will be returning next year. This time, I’ll be paddling with family and friends. They saw my photos. They heard my stories and they heard my joy. Now, there is a waiting list for my copy of this book.

EDITOR’S DESK: Julie Lang lives in the Washington, DC area, less than 12 minutes from the put-in on the Potomac River, and regularly documents her whitewater adventures on Instagram at @potomacsurfer