A few weeks ago Jeff Vannoy and I set aside a day for a Nolichuckey Gorge trip. After I Wallaced my pretty little booty off on the Doe River, and had the longest swim of my life, my confidence was rock bottom. What would you expect from loosing your boat to a strainer, having the local police and rescue squad called, breaking your toe, and having to hike back to your vehicle? The Noli Gorge run was intended to be a training and confidence booster.

It was a holiday weekend so I had extra time off from work. We had planned to run the gorge on Sunday, but I had gotten home on Thursday night. This allowed me a run on French Broad 11 with Jerry Griffin, French Broad 9 with Jeff Vannoy and Rahul Subramanian, and the Upper Pigeon with DBP Admin Wes Britenbach. 3 smaller runs without Mr.Wallace was a good warm up.

The Doe River had also beaten the outfitting out of my boat. These three runs allowed me opportunity to readjust. I decided not to readjust the replaced outfitting, but to adjust my paddling style.

This particular Sunday there was one commercial trip held by USA Raft, so we paid Matt Moses to shuttle us to the gorge with his group. At the put in we quickly jumped in our kayaks and outran Matt’s rafts to have the river to ourselves. We only ran into two more kayakers all day, Matt Dalton and Maggie Darden.

It was a beautiful day on the gorge with nobody in sight. Jeff and I had the river all to ourselves from Jaws to USA Raft take out. This run turned out to be perfect with a flow of 1000cfs. 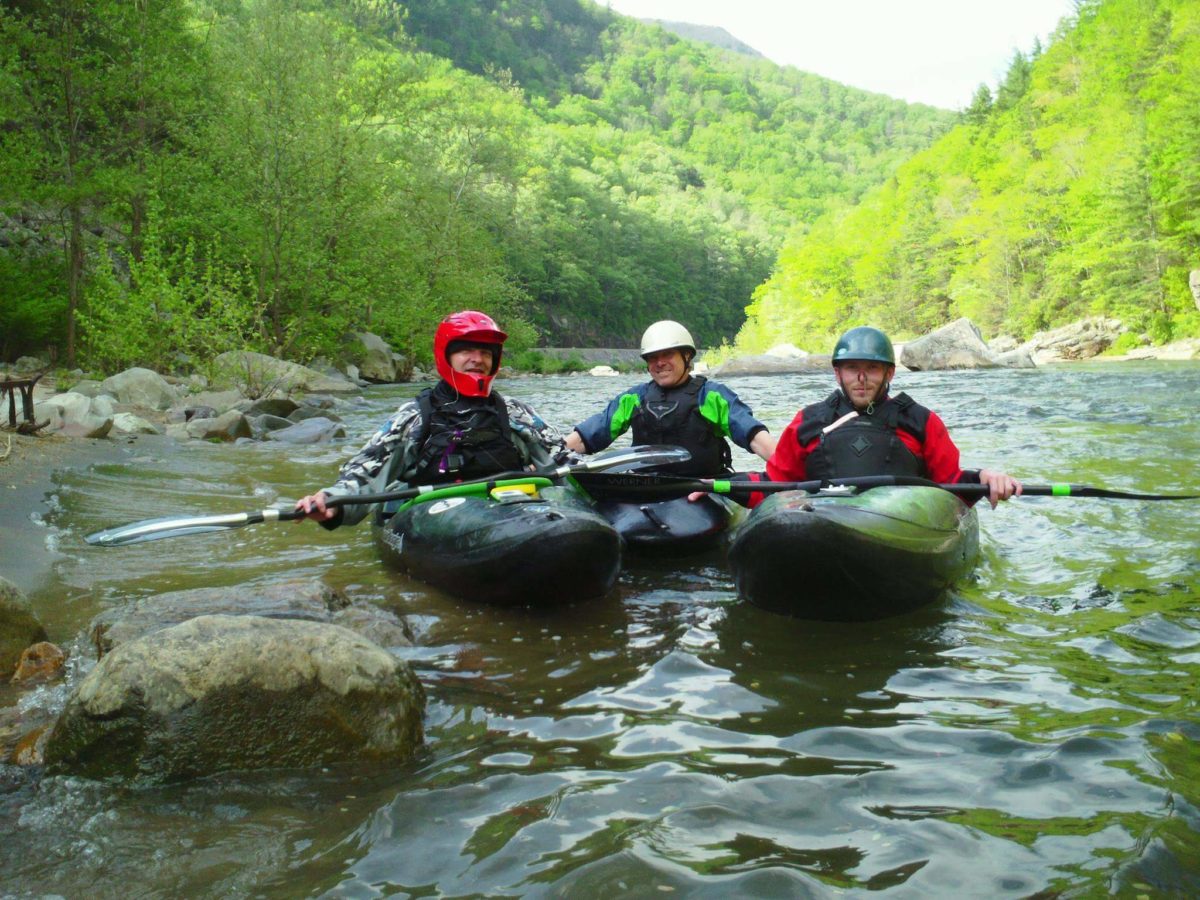 My first combat roll came in the top of quarter mile. I Wallaced here last year while leading Nick Bonner on his pfd at low flow, and swam a beautiful beater line. I took 3 additional swims to recover my gear. Jeff was so happy to see me get my roll here that I thought he was going to pull his skirt, jump in, and swim the rest of the rapid in my place. He was stoked!

My second combat roll came at Doo Doo Hole. Luckily I wasn’t in the actual hole when I went under, that could have been a nasty situation. Despite the name, Doo Doo Hole will not flush you out. It’s a serious keeper at that level. I’m not sure that I could work my way out of that funky mess. It has been known to have a few ropes thrown in it.

My third combat roll came at Maggies Rock. I was following Jeff when he decided to run a creek line. I was right behind him when I saw him go for his move. At the last second after seeing what he did, I thought ” Nope, Ain’t no way. You are on your own there Hero!”. I took my own line and ended up on my head anyway.

When we got to Twin Eddies I knew that Jeff would have me do crazy eddie hopping. I didn’t give him the chance. He hit the high right eddie and I went for the top left eddie. When he yelled from across the river, I acted like I couldn’t understand a word he was saying. I turned and nailed my line to freedom. He played a moment and then came to me, just like I knew he would. As always he tried to talk me into playing in the bottom hole. I simply said “Nope. I love this river, but this is the first time that I have ever made it out of this gorge with no assistance from anyone and no swimming. I ain’t letting you mess that up on the last rapid.”

After the run we talked about the day and the next step. We both decided (Jeff decided, I agreed) that I needed to come back at 1500cfs or a little more, but no more than 2000cfs.

Forward two weeks: the level is high 1700cfs to very low 1800cfs. It’s time for my step up run. Jeff and I decide to drag Jeff Robinson and Whitney Eure in on the deal. Jeff doesn’t say this, but I know what he is thinking, safety and recovery team. Whitney and Robinson don’t know it, but they just took lead position to chase my boat when I swim.

We decided on “Dawn Patrol “. I contacted Matt Moses and told him that we needed a driver EARLY the next morning.I was loading boats and gear 6am sharp the next morning, after staying up until 1am writing the Lecref Anapim article the night before. Can you say COFFEE!

This would be my first time meeting Whitney. I realized why he was here before we ever made it to the put in. He is a jovial little fellow, with a great sense of humor. He has a warm smile and a honestness about him. He was definitely going to be an asset to the day.

There has to be Wallace in all of my articles, so here it is. At the put in we all unloaded quickly. I didn’t want to be the last person ready with everyone waiting on me. I grabbed my kayak and set it on the edge of the bank for a seal launch. I sat down and went to adjust my skirt just as my kayak decided to relieve itself of it’s painful grasp on the loose gravel. I grabbed my paddle, but was off balance for the 15ft slide. I didn’t have time to put my skirt on. This combination of stupidity did not go well when I hit the water. My first swim is the put in, and in front of a full SWR class being taught by Chloe Tipton. I yelled up to Chloe and asked “You got a rope!”. She looked over her shoulder, smiled, and yelled back “Not for you!”. Swimming the put in for an audience is somewhat embarrassing. I deserved it for being in such a hurry.I drained my kayak and we four kindred souls paddled off into the beautiful early hours

I found out early on that the higher water level changed many of the features on the gorge. I tried a new line at On The Rocks, but failed epically, and had to resort to the traditional line. At Quarter Mile, the traditional line was questionable for my skillset. I wanted to follow Jeff into the eddie, across the main current, but honestly I didn’t see me finishing well. Robinson and I opted to follow Whitney down a creeking line.

At Rooster Tail, Robinson, Jeff, and I eddied on river right, just above the drop. Jeff asks me “Do you know where you are going?”. I should have read this as a warning sign. Insted my cocky sarcastic side came out, “What? Didn’t I do it right the last time?”. We said a few more words and I turned and headed towards Whitney, who had already ran the drop.

Rooster Tail is a right to left diagonal line with a huge curler wave that runs right beside the only line available. As you are running left you can see the hole on your right side 7feet below. (Danger, Will Robinson!) This hole is guaranteed to flip any style boat that accepts the challenge.

As soon as I dropped the lip of the horizon I knew the current was pushing faster than I had judged. I paddled a few hard strokes and looked to my right, over the curler, directly into the hole. My mind said “Don’t go there!”. At that instant I looked at the bow of my kayak. My Flying Squirrel was peeking over the edge of the curler. It said ” Hey, that looks fun!”. It took an immediate right turn, cut the curler, and dropped me into the depths of the abyss waiting below. It didn’t even ask my permission or opinion!

Well…..we all know what happened next. That’s right, I sank faster than the Edmund Fitzgerald! As I attempted my first roll, I felt the curent try to pull my paddle from my right hand. On second attempt I came up. As soon as I surfaced, I knew that I was backward. I looked over my left shoulder and found that I was falling into a second hole that was nearly as deep as the first one.

I threw my paddle out for a brace, but it didn’t hold. It sliced through the water like a knife through hot butter. On my head once again! I threw my paddle up and rolled upright on the first try. I’m still backwards and decide to stay that way for the rest of the rapid. I was relieved to find Whitney waiting on me at the bottom of Rooster Tail.

The rest of the run was clean lines, fun times, and lots of conversation with my new found friend, Whitney Eure. Jeff even got me to play in Twin Eddies for awhile. At the USA Raft take out I ran into Matt Dalton, Maggie Darden, Ryan Horn, And Edgar Peck celebrating Maggie’s birthday . We had a quick bite to eat with them, and my crew left for home. I ended up scoring a Lower Noli run with Steve Davis, and Marie Bradford to finish out the day. It’s great to be winning!

Until next time, go beater something, have fun, stay safe, and send us some Wallace!