Dipesh Gurung was raised in a self-described “normal village” in Nepal. He now has the chance to lead the way in developing Nepal’s kayak instruction standards.

The goal is to raise Nepal to the highest standards of kayak instruction in the world and change the scope of opportunities for up-and-coming Nepali kayakers, but the process isn’t easy.

Join Adventures, a team leading whitewater expedition in Nepal and developing funds for sponsorships and training programs both locally and internationally, is striving to make this goal a reality. The group is currently working to send Gurung to New Zealand where he would spend three months training with the New Zealand Kayak school as part of a long term project to qualify a team of Nepali kayakers through the New Zealand Outdoor Instructors Association and to create an equivalent national standard in Nepal.

Gurung started kayaking nearly a decade ago, and learned to paddle and roll a kayak in a lake near his brother’s apartment in Pokhara — he didn’t have access to any rivers at the time. He is now a class V kayaker, raft guide and trip leader, but he wants to take it a step further. Nepal has no internationally recognized kayak instructors or programs to qualify international instructors, so traveling to New Zealand to train would set Gurung apart. If Gurung were to achieve this level of instructorship it would not only enhance his ability to share with the other local boaters, but also raise the international recognition of Nepali kayakers and the rivers there.

Gurung has been working as a kayak instructor and trip leader with Join Adventures since it was originally conceptualized by Australian Laura Oakley in 2014. His strong understanding of the program’s philosophies and goals led him to quickly become an integral part of the team where Oakley welcomed him as a co-founder.
The Join Adventures team not only leads whitewater expeditions but also offers training to local paddlers of all levels. The local trainings for Nepali paddlers are free, and as part of their mission to pay it forward, Oakley and Join Adventures are also working to facilitate Gurung’s trip to New Zealand through helping him with funding and the complicated visa procedures.

“Dipesh leads through example, believes in people and he is exceptional on whitewater,” Oakley said. “As the team’s trip leader and head instructor, he has the skills, reputation and the heart to make a huge impact. The opportunity for Dipesh to train with the New Zealand Kayak School is not just an opportunity for him, but the whole team as well as the local paddling community as the training will flow on to local paddlers through the free Join Adventures training programs.”
She and Gurung know what a big difference it will make to be trained in New Zealand because Oakley has completed the New Zealand Instructor Qualification and instructors from the New Zealand Kayak School have also taught in Nepal in the Join Adventure trainings programs.

“I can teach beginner to intermediate level already, and I can kayak all levels, but there are some things I can not tell the intermediate levels,” Gurung said. “I need to learn some of the little ingredients.”
New Zealand Kayak School instructors Sophia Mulder and Jess Matheson spent three weeks working with the Join Adventures team in Nepal, and in that time showed Gurung how much more there was to teaching kayaking.
“They had a certain technique,” Gurung said. “They found our weaknesses and taught us.”
Mulder is now helping to bring Gurung to New Zealand to work with the school.
“This will really help to develop him as an instructor and kayaker by fully immersing him in the culture we have going at the school,” she said. “He will be able to observe and assist on all levels of courses from beginner to advanced, including instructor training and river rescue courses.”
During the three week training in Nepal, Gurung stood out to Mulder as the most experienced member of the Nepali team and while he was already a high level kayaker, progressed his instructor skills is the next step.
“The main things we helped Dipesh with was broadening his instructing toolbox to help fine tune the client’s skills and teach more advanced skills,” Mulder said.
Gurung’s personality and passion for whitewater makes him the perfect candidate to send to New Zealand, Oakley described.
“Dipesh is particularly, as an individual, really about helping people get better and giving them the time and understanding,” Oakley said. “He is exceptionally compassionate and he is also somebody that is very passionate about the river. He paddles in his personal time as well as for work.”
Enhancing the level of instruction within Join Adventures will allow them to broaden their scope and continue to improve the programs they offer.
Join Adventures focuses on three-week to month-long expedition style whitewater trips welcoming all levels of paddlers and physical abilities, making adaptations to their trips to do whatever it takes to get people on the river. They encourage people of all cultural and economic backgrounds to join the trips and focus on including people with physical disabilities who wouldn’t otherwise be able to run the rivers. The trips see a range of guests from across the globe.

Tim Kenyon, of Bendigo, Australia, who joined the team during an instructor training as a practice participant, got to see the inner-workings of Join Adventures. 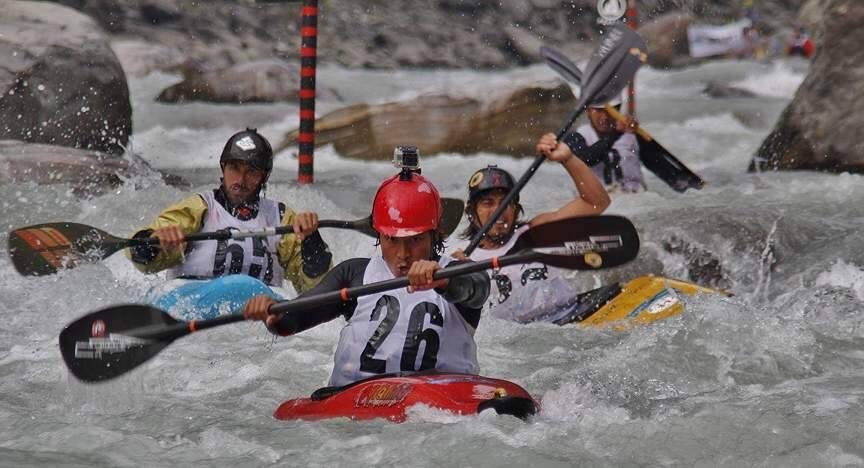 “[Join Adventures is] clearly in the process of developing a new standard of professionalism in kayaking schools in the county,” Kenyon said. “The locals have the place based experience and the kayaking skills. People like Laura are giving them the opportunity to use that and become skilled teachers with the methods and professionalism of the western world.”
Kenyon said at the time he took part in the clinics he was just beginning to get seriously involved in kayaking.
“The experience was extremely beneficial to my understanding of strokes and roll technique,” he said.

For Larry Stewart of Tennessee participating in a month-long Join Adventures trip not only helped him to progress his kayaking skills, but was also a transformative cultural experience. He and his wife have taken several international kayaking trips, but venturing into Nepal was amazing and pushed their limits with many new scenarios, Stewart described.

“This is a big world full of beautiful, interesting people — the more we get to know, the better picture we have of life outside of our bubble,” Stewart said. “The team of JA was incredible … you couldn’t tell it was a job to them, just a way of life.” 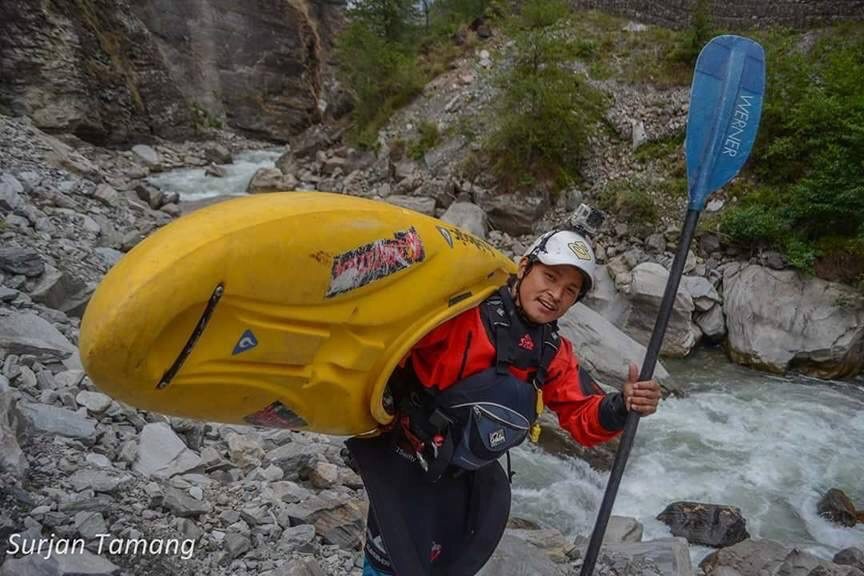 Stewart was struck by the Nepali paddlers and wrote a letter of support for Gurung’s visa process.

“Dipesh’s commitment to safety, comfort and fun for all the guests was obvious throughout the entire time we were there,” Stewart wrote in the letter. “Dipesh could be counted on to make happen whatever needed to get us where we were going. On the river, Dipesh was always looking out for everyone’s safety first and fun second from the rank beginners to the experienced boaters alike. His playfulness kept everybody laughing both on the river and off even after hours when him and the other guides would hang out with the guests and play Nepali music, sing and dance with us.” 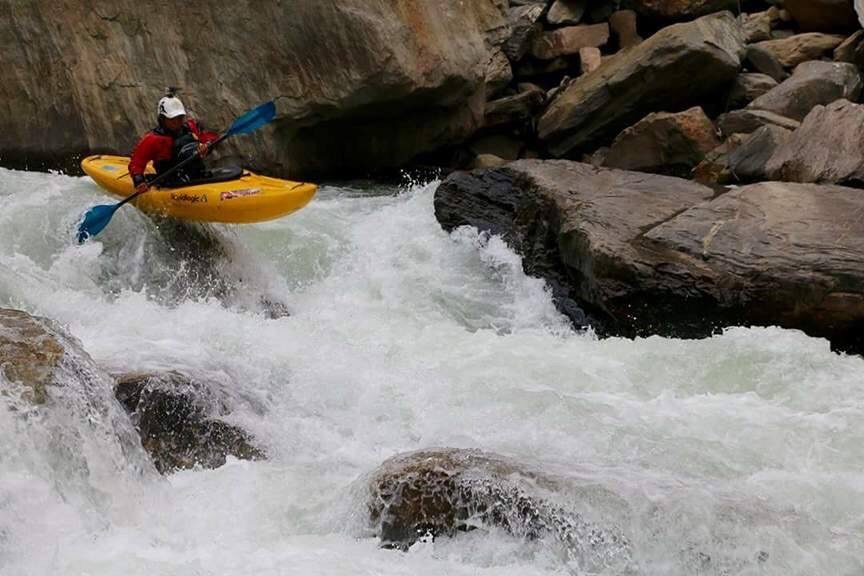 Surjan getting after it, photo by Dipesh Gurung

Amanda Gregory, who lives and works in Nepal, is also working to help Gurung to secure a visa so he can travel to New Zealand.
“Traveling out of the country is not easy for the Nepalese,” Gregory said. “Things done here are very slow and not done in a Western way.”
Gregory’s passion for whitewater and Nepal inspired her to get involved with helping Join Adventures obtain their goals.
“[Oakley] wants to pass on the benefits of her training not just to the kayakers on the Join Adventures team, she wants these kayakers to pass on skills to other kayakers,” Gregory said. “She wants to bring up the whole standard of kayaking. Once she gets that done it will open up the door to other kayakers.” 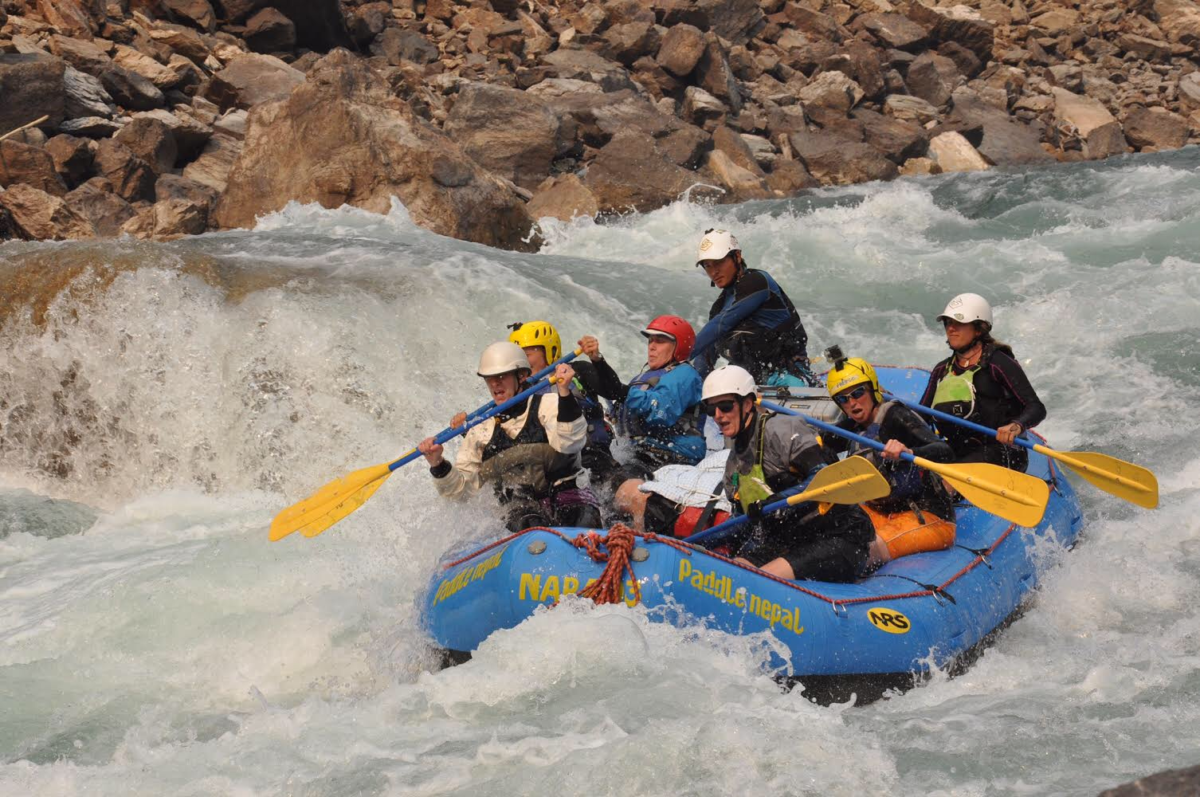 Dipesh Guiding Karnali River on a Join Adventures Expedition 2016
To learn more about Dipesh Gurung or to help fund the journey, visit www.gofundme.com/kayaktraining. For more information about Join Adventures or to sign up for one of their trips, visit www.joinadventures.com.