After what we thought was a very successful first year with BAB (big ass bitch) our 14 foot Saturn raft. Our first few trips we were fortunate to have our wonderful friends Darren and Suzy to take us under their wings and show us the ropes. They live in Newport Tennessee, less than twenty minutes from the pigeon river where they learned their chops. We were confident and even went down a couple times on our own knowing nobody on the river at all. Every weekend Michelle and I had free from work and other obligations, we would drive three hours to the pigeon river to play. We took my son Karak (13) several times with no incident and even took some friends who’d never camped before. Took many children for their pfd and even kayakers who never rafted. 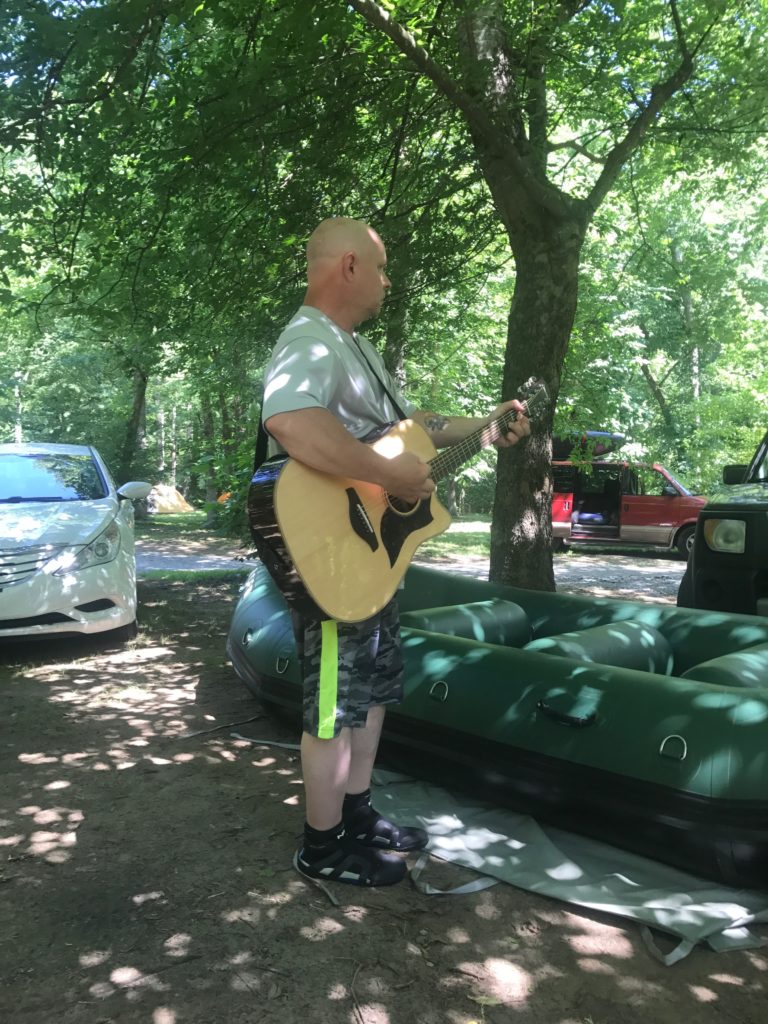 We were ready for more action the second year. Ready to learn and grow more and I was even entertaining hopes of maybe becoming a guide some time in the future. My daughter Kaleigh (25) kept insisting that her goal for the summer was to spend more time with me even if it meant camping and. . . Perhaps even rafting if I really wanted her to. I did. I can’t understand what changed this year, but Wallace followed us just about every time we headed to the river. It rained most nights at camp and Michelle or I or both swam on most of our trips down river for the first month or so. We finally started getting our mojo back when Kaleigh decided to join us. She brought her friend Haley with her. Neither of them had ever been whitewater rafting before but were willing to give it a shot. It happened to be Father’s Day. Entertainment Director and DBP admin Wes Brietenbach was available to offer safety for us along with another great friend and DBP admin Michael Potter. We all decided to meet at our regular camp site on Saturday. 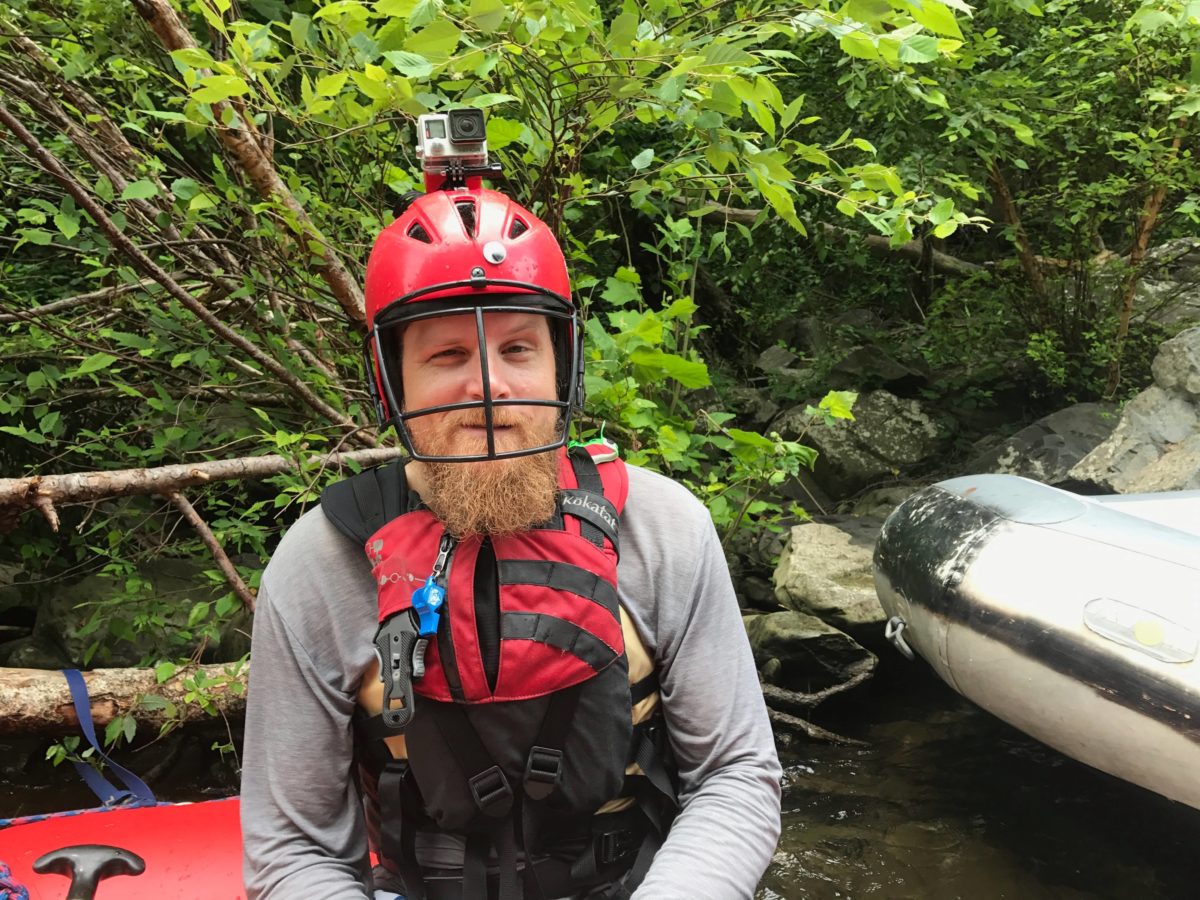 Potter insisted on taking Michelle and me to breakfast that morning before everyone else arrived, so we filled up at Cracker Barrel and took advantage of the coffee that kept flowing while the three of us caught up. I confessed to them my nervousness about taking my daughter down and they couldn’t understand why. I just didn’t want anything to go wrong I explained and how I was lacking sleep from the early hours at work the day before and the long drive and late night with friends camping near us last night. I just felt like something wasn’t lining up. Both Potter and Michelle reminded me of how many trips I’d taken down the Pigeon and how it shouldn’t be a problem. I let them comfort me into thinking it’ll probably be alright.

So we got back to camp, inflated the BAB and waited for everyone to arrive . Had a beer to try and calm my nerves. Potter breaks out his guitar and plays for us for a bit before the girls arrive. Once they got there and we fitted them with gear and a little bit of safety talk, Wes arrived and we start to get his boat ready. We load everything into Wes’s truck as he drives us all to the put in at the North Carolina state line. Being a holiday of sorts, the place was packed so he had to park kind of far away. While we waited we continued the safety talk. You know, if this happens (but probably won’t) this is how you respond. Wes returned and added more to the talk and we’re finally ready to take off! 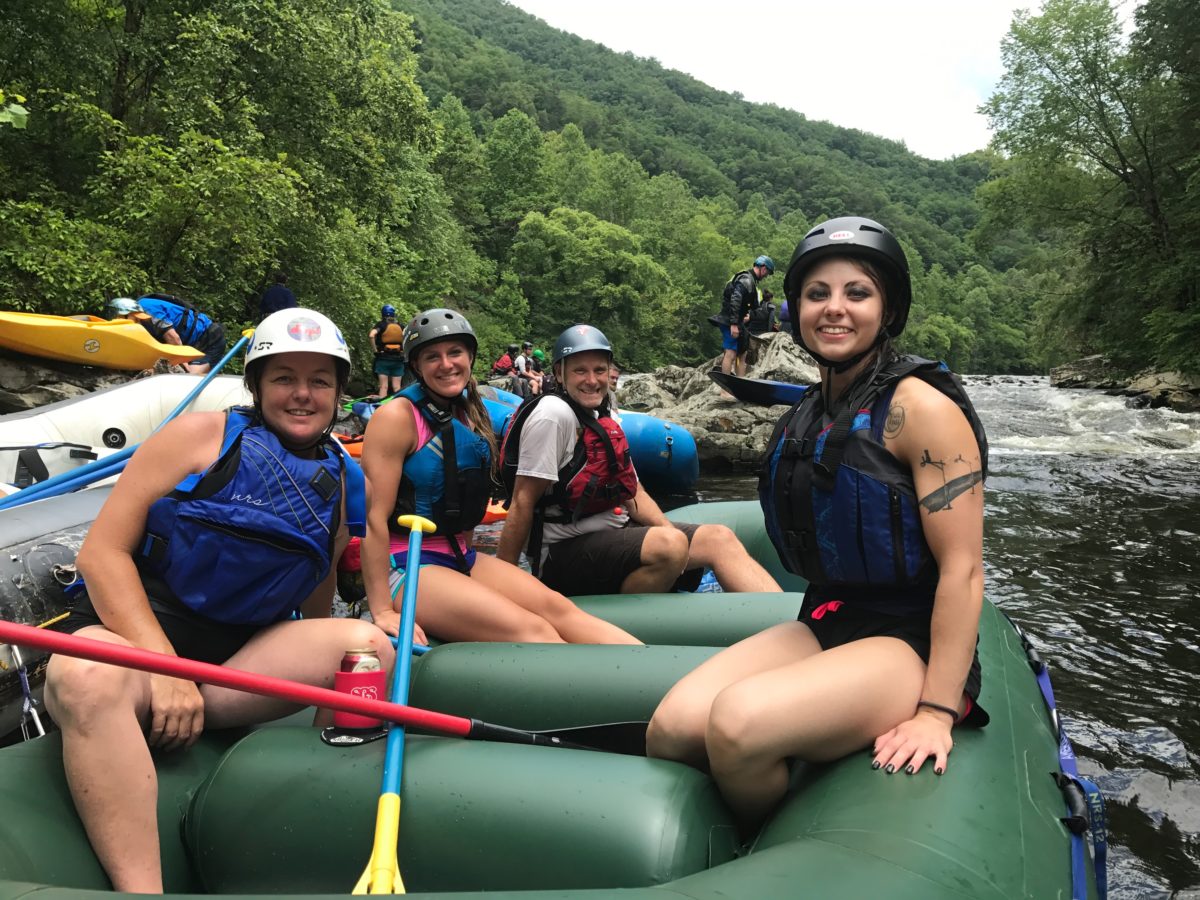 There was one small but important detail that we failed to mention. This detail was something that Michelle dealt with once we got on the water… How to hold and use your paddle. Kind of important for any first time paddlers. As we peel out at powerhouse, our first class III, I’m watching their confusion while none of us are watching where we’re going. I noticed we’re headed for a rock that resembles a ramp and desperately try to steer away from it but it’s too late! This is going to be trouble. As we begin our assent up the rock I immediately see Michelle and Haley falling out in unison, then on the high side I see Kaleigh’s eyes widen with fear as she tumbled down and sure that the boat was going to flip, I fall out and join my group of swimmers. All of this is happening in slow motion and it seems like I was under water for an eternity. When I finally surface I’m looking around desperately to find my crew. Haley pops up beside me having a panic attack and while holding onto the boat I yell out to the other side to see if the rest of them were okay. Michelle informs me that Kaleigh was seen going under the boat and now I begin to panic thinking how much I wanted her to come boating with me and now I’ve lost her. It takes forever as we see her come up for air then back down. This was all taking much longer than it took to hit the rock in the first place. Alas I see a red boat pulling my daughter aboard still quite shaken, out of breath and in full panic mode. Seeing Kaleigh being rescued, Haley finally began to calm down as I was trying to make out who these fine gentleman were doing such a great service to us. Embarrassed when I realized they were our safety boaters. Holy crap, where is my brain! I’m torn up like a soup sandwich! My swim at Iron Ring on the Gauley when I thought I had broken a rib, was a cake walk compared to my reaction to this event. We’ve been the water for a total of maybe thirty seconds and everything has gone to hell! At least Michelle held onto her paddle while Wes and Potter recovered the ones the girls tossed. They pulled Hailey in as Michelle and I were able to get BAB to shore and climb in and catch our breath. Serious Wallace. Neither the girls nor I were sure that getting back into my boat was a good idea. We made our way to calmer water and finished the training on what to do with the paddle. The rest of the trip was much more as it was intended. We all ended up having a great deal of fun as they became more comfortable paddling together. However I managed to fall out of the boat a couple of more times before reaching the takeout. Then the real embarrassment came. Everyone we encountered knew what happened, even folks who weren’t on the river on this Father’s Day from hell. It’s been a full year, and Potter and Wes still rag me about it. Every now and then when boating with friends I’m reminded of that unforgettable day as we discuss who’s going to guide. Hell we’ve met boaters since that day who witnessed the whole thing and exclaim “that was you guys!” It will never go away, but that’s okay, it shall always keep me humble

My daughter still loves me and claims that she enjoyed the rafting trip other than the near death experience. Just the other day her and Matt, the fiancé, mentioned maybe going with us before summer ends. I will be well rested when this opportunity arises but may still call on Wes and Potter for safety. Some things I’ve learned: Teach crew about paddling while still on land and let them show you they understand. As a boater, your always between swims. Love your family and friends, you never know when you’ll have to depend on them. Take there shots, they’re not laughing at you, they’re laughing with you. Might be a good idea to actually learn to guide