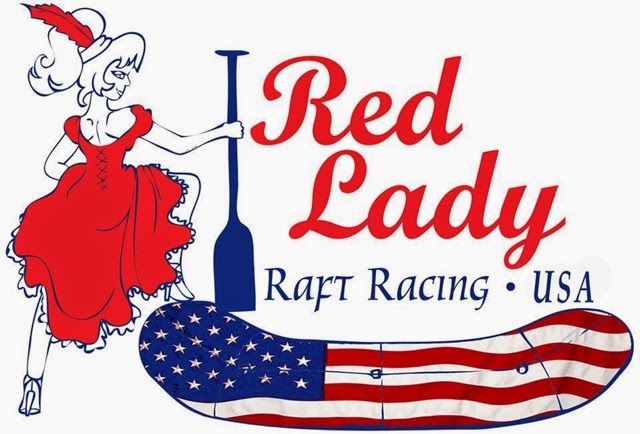 The Red Lady Raft Racers, made up from a team of professional river guides, was formed in the Arkansas Valley.  They are real ambassadors for their sport, a young team with big ambitions, and will spend their winter training on the Colorado River to compete in the National Selections in 2013. The stakes are high because the honor of representing their country at the World Rafting Champs in  New Zealand in 2013 is up for grabs and it is their aim to scoop up that honor. 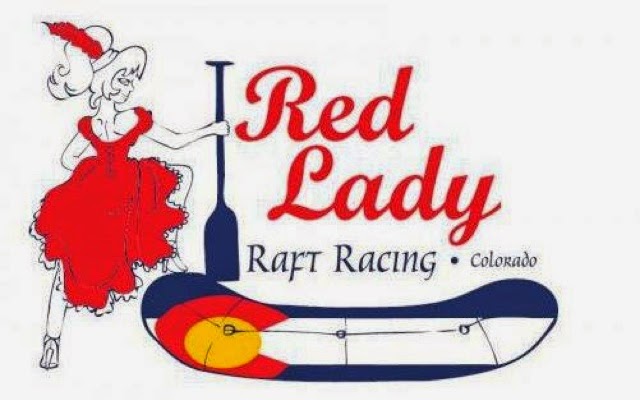 The formation of the Red Lady team began in 2011 with Cristin Zimmer and Julie Sutton (current Team Captain) at the national race in Oregon. Cristin was a former USA women’s team paddler who raced internationally for several years. Julie raced locally in Colorado with the idea of forming a team to take to nationals. Both ladies had a goal to increase the knowledge and participants for women to compete in raft racing. After the 2011 Oregon National Race, the team added new members and continued to practice, increase awareness of the sport and involvement of more ladies
Current team members include; Bre Rocksund, Heather Byrne, Julie Sutton, Jen Hodgkiss and Tana Deklevar. 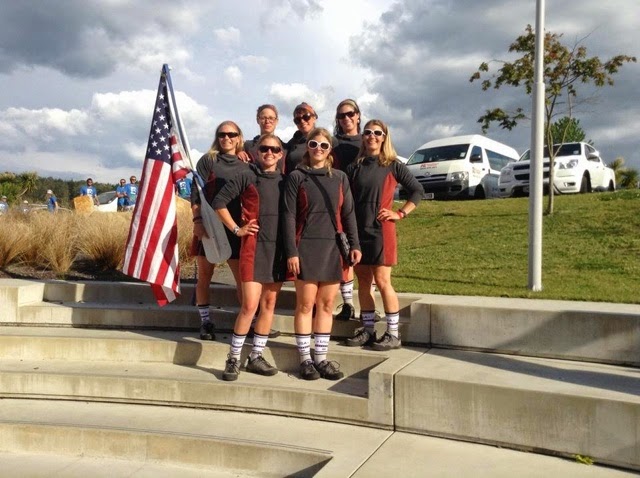 Heather Byrne introduces the history and training regime of The Red Ladies in the following interview:
“This team intends to train hard during the winter season in Colorado and become difficult to beat during the 2013 Nationals. We do this because we love the river, love to raft and love the company of other like-minded women. We intend to increase participation of ladies in the sport and compete on an international level.” 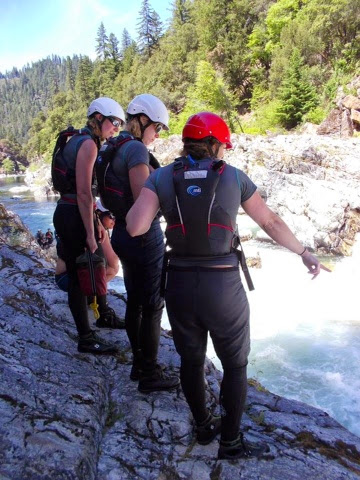 NADA: Currently in rafting there are more male teams, but motivation like this could see this changing. Rafting tends to sit at a ratio of 3 men’s teams to 2 women’s teams at the World Champs, which is pretty good for this type of sport – but 50/50 would be even better!
When will the decision be made as to which teams will represent the USA at the 2013 World Champs?
“Our Nationals will not be until Spring/Summer 2013. Sometime between April and August….The current USA National Champions is the Teva women’s team.” – This is the team that represented the USA at the last World Champs in 2011 in Costa Rica.
For Jennifer, Tana and Bre, downriver is their favorite discipline. Jennifer says:
“Not only is it the longest race of all, but we truly connect as a team. We all have to support each other as a team, be able to read each other, and the water.”
Tana adds : “Six different personalities and means of communication can be harder than the whitewater itself.” – That’s true and challenging. 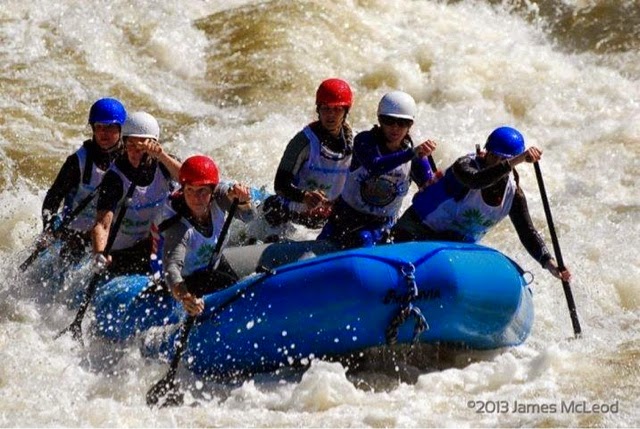 The USA is a big country and it is not easy to organize national competitions. Travelling from one end of the country to another is expensive. We ask Julie about possibly splitting the division so that the best teams of the divisions could compete then for first place and why such a big country is not divided by regions?
“This question is so great because it would be amazing to get more teams organized, involved and informed. Raft racing in the U.S. still seems to be a new and young sport. While there are races throughout the country and there is organization, it seems that the sport just doesn’t have enough participants, interest, or popularity- male or female, that take it seriously enough to get more divisional races organized – this is something that is slowly starting to happen. It has been dominated on a national level that competes internationally by teams from Colorado for quite some time.” 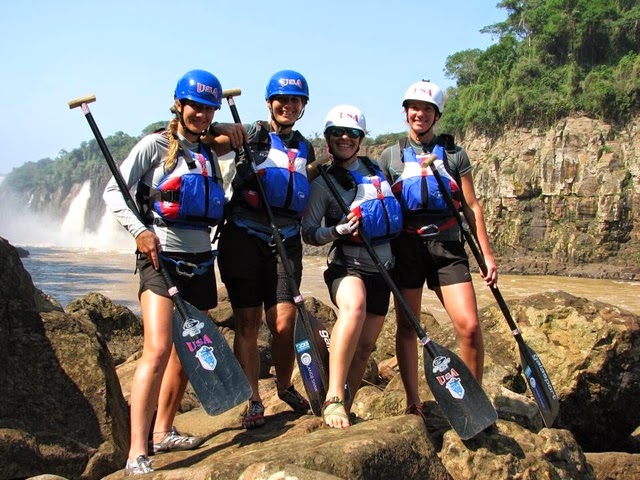 But what we can see is that you compete across the U.S.A on beautiful rivers of a high class?
“The US Rafting Association has done a great job moving the national competition around the U.S. to inspire more participation; however, it seems that teams from outside of Colorado tend to mostly compete only when it comes to their region. There are so many talented folks out there, and it seems that more than anything the lack of competition comes from a lack of information, interest, and financial ability to travel.”
In addition to training, competitions, and other obligations, as true fans of the sport these ladies try different things to bring rafting closer to the people. Their main goal is to try to attract more women, by investing their time and free labor, which is not too difficult.
“One of our goals, as a team, is to inspire, motivate, and encourage more women to get involved. We definitely welcome the opportunity to get other women started – not just to be on our team but to give them information and encouragement to get their own team started if they leave our region.” 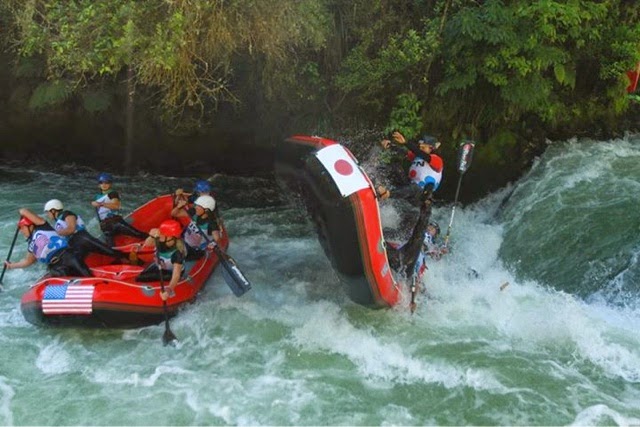 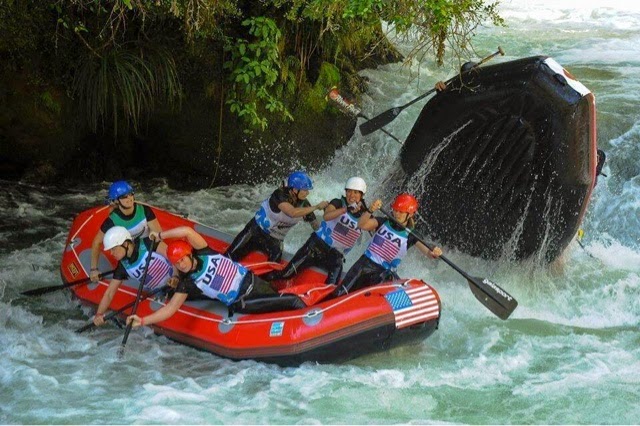 EDITOR’S NOTE: This article first ran in 2012. DBP runs it tonight to honor our friends on the team, and also to kick off our newest weekly feature on our Dirt Bag Paddlers Facebook page, WOMEN OF WHITEWATER WEDNESDAY. Please check out our page at https://m.facebook.com/1worldwidewallace?ref=bookmark
The Red Ladies went on to win the Worlds representing the US in New Zealand in 2013. These awesome ladies also competed for the US in Brazil this year. They are currently restructuring the team. 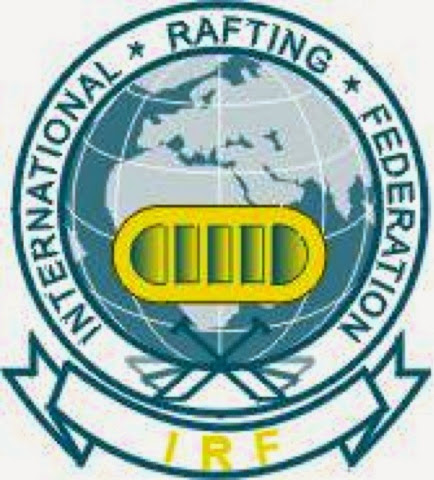