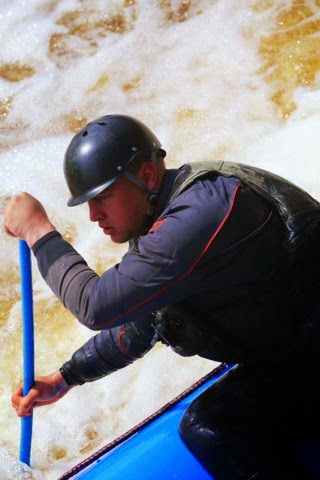 To paddle whitewater is to pursue passion… But for those Dirtbags truly possessed it is an affliction that will drive you, both figuratively and literally, as is the case with Aaron Erdrich, DBP-Wisconsin and captain of Team Hyside. We caught up with “The Guy on the Pontoon”, founder of Duck Wild, and creator of such DBP segments as Faces of Whitewater and the hugely popular Heavy Metal Rafting, to discuss his amazing  2014 cross country whitewater odyssey and his plans for the future. 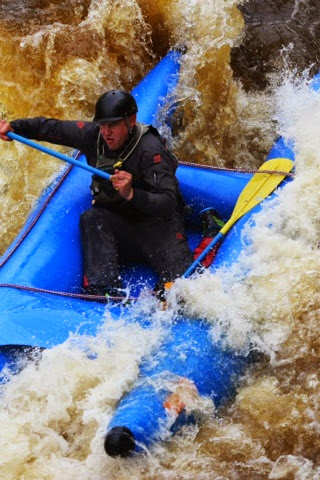 No discussion of Aaron’s EPICNESS in terms of running missions can begin with anything other than THE LIST. Beginning with the home stretches, in 2014 he ran:
In the Northwoods (WI and UP) Black, Presque Isle, Montreal canyon, East fork Montreal, West fork Montreal, Powderhorn Creek, Planter Creek,  Upper Silver, Falls River, Union Creek, and Yellow Dog, all of which were first rafting descents. He also pounded out the West branch Ontonagon, Menominee, Paint, Middle branch Escanaba, Peshtigo, North fork Pike, a few sections of the Wisconsin, South fork Jump, Pelican River, La Salle Falls, Wolf section 3 (“I don’t pay to play” he says), Chippewa, Eau Claire Dells, the Tomahawk rapids, and Prairie Dells. On the North shore of Lake Superior Aaron scored the Lester, French Knife, and a first decent on Amity Creek in Minnesota.
Then he did a few southeast mega missions. In Kentucky rivers he paddled the Russell Fork @ 3000 cubes, Grassy, and the Ohio River – Falls of the Ohio. In Tennessee he did up the Nolichucky, Watauga, Ocoee, Tellico, Obed, and the Chattooga sections 2,3, and 4 in South Carolina. In North Carolina it was the French Broad, Casscades of the Nantahalla, and the Little River,
Aaron spent considerable time in West Virginia (“West by Justin” he jokes) in September and October, scoring about 40 Gauley trips, and running the Meadow, New, Valley Falls and Arden sections of the Tygart, and Deckers Creek “The Golden Shower.” He also ran the Top, Upper and Lower Yough and Savage (MD and PA).
Aaron traveled to the Northeast for the Kings of New York, doing up the Beaver, Black, and Hudson.
Turning his attention to the west, he spent part of the summer in Colorado running the Ark, Gore Creek, Clear Creek, Blue River, Breckenridge’s gnar, and Taylor.
And late last year he paddled the PNW, dirtbagging the Opal, White Salmon, Canyon Creek, Blue River, Fall Creek, Santiam, Little White Salmon, and Trout Creek…
That’s 51,000 miles of driving through 23 states to blast 65 major stretches of whitewater…. Props! 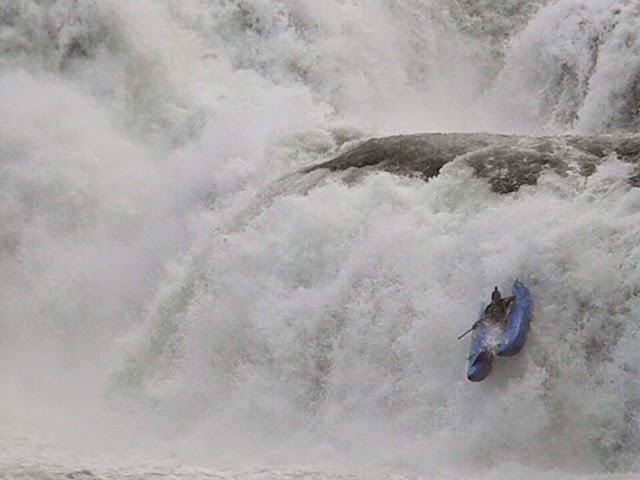 DBP: Can you narrow it down to a Top Five?
AE: “The LITTLE WHITE SALMON, BLACK RIVER (MI), COLORADO RIVER’S GORE CANYON, CANYON CREEK, and The GAULEY: UPPER, MIDDLE, and LOWER, my favorite commercial trip.”
“I don’t know, its hard to try to list my favorite runs sometimes. It’s more about water levels; sometimes you can have a great time with friends regardless of the river or what it’s running. Every trip is different,” he says, “even if you are on the same river – that’s what draws us into the sport and makes it fun – a mix of adventure, danger, adrenaline, and the natural beauty of mother nature.” 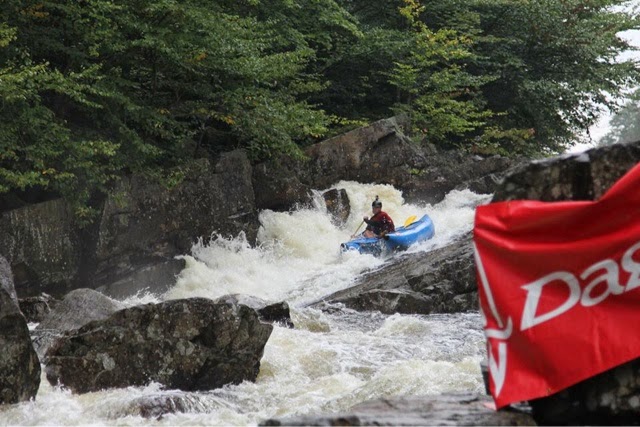 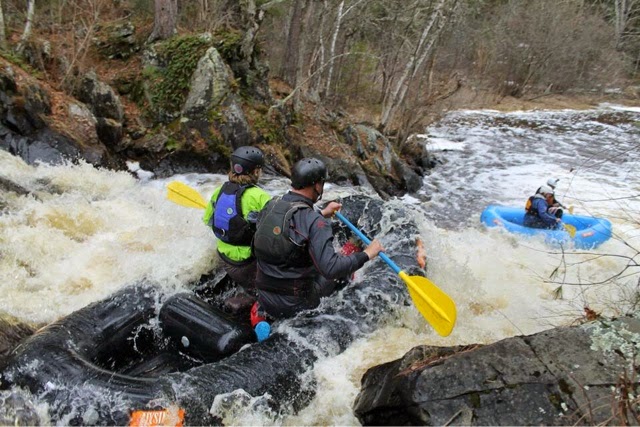 Aaron mostly solos a Hyside Paddlecat, but the good people at Hyside have also hooked him up with the new Neo Mini-Max. Although he can solo the hardest of Class V runs or drop monster stouts in either, it’s the tracking quality and hole punching ability of the Paddlecat that he turns to on the biggest runs. He’s quick to loan out a boat to help get a trip going, and is the first man awake and the last to want to leave the river. His engine runs on overdrive.
Aaron got his start as a river guide, and has held down spots at numerous outfitters throughout the States, most recently walking on at ACE in West Virginia for Gauley Season. This may explain why he’d rather run solo, and why he delights in being the Merry Prankster of Dirt Bag a Paddlers, wreaking havoc at raft outposts all over the country. He’s almost as well known for his fireworks assaults as his monster paddling, but at heart he’s just out to have fun, even if that means spreading “Butt Hurt,” his favorite activity.
He’s also proven his ability to run races to the max, winning first place at last year’s Animal Race on the Gauley, and joining up with a team of Dirtbags to win the Ocoee River Race a few weeks later. He would have won more races if other festivals would have let him compete. 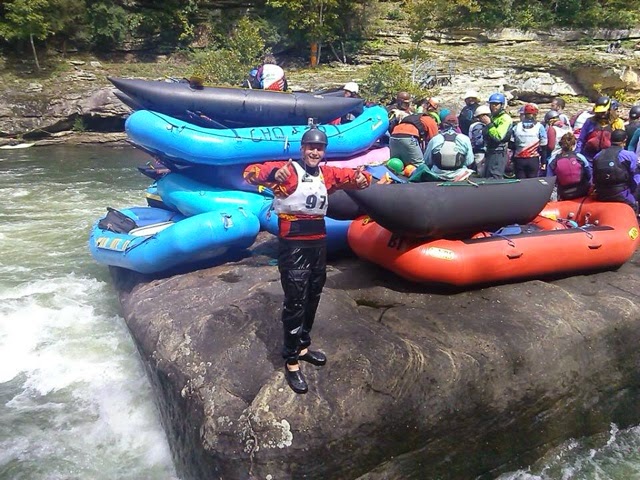 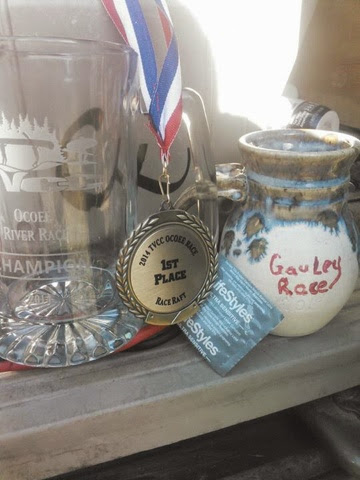 Aaron has also done a lot of river running in California, where he started his raft guiding career. Although he didn’t make it out there in 2014 because of the severe drought and subsequent lack of runnable flows, he had this to say about the Cali scene: “The Kaweah River in California….  I haven’t been there for a while but it’s super sick! Think rain SoCal! I wouldn’t mind a trip down to the Kings. Then there is the Kern,” where he first pushed rubber for an outfitter and started his affiliation with Hyside,” throw in  the Forks of the Kern and Burnt ranch and it’s on!” 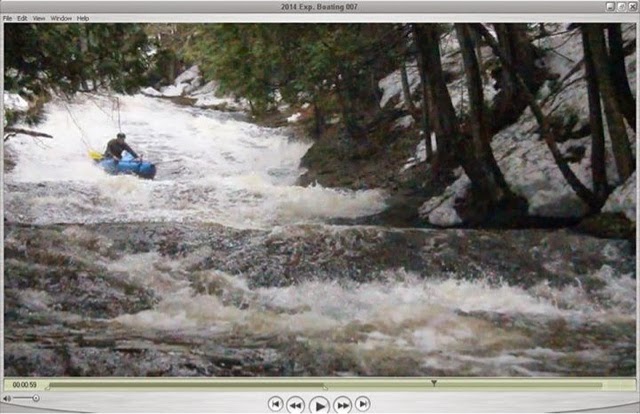 Aaron’s big gun runs lead to top notch footage, especially cool stuff from the various river festivals that he attends, like the massive Wallacing of a kayaker and swimming with a blowup Obama doll at Kings of New York. He’s the genius behind “Faces of Whitewater”, where he captured quick shots of paddlers in their element, and the wildly popular “Heavy Metal Rafting” feature that runs every Monday on the Dirt Bag Paddlers Facebook page. You’ve got to check them out if you haven’t! Aaron doesn’t usually post his videos anywhere else, and they’re outstanding. We asked him about his filming.
“I had a computer full of footage and at one point I stopped filming when I broke my GoPro. I broke down towards the end of Spring and bought a new one, and I started taking 1 and 2 rapid clips, editing a little bit and throwing rock and roll over it. It caught on, and now between 2 and 10,000 people watch them on Facebook.  I have a few favorites in my ‘personal stash,'” he adds, “videos that won’t post to Facebook, YouTube or Vimeo (because of music copyrights). Unfortunately they are some of my best work. I love all the likes and comments on them,even if it is negative hate rants. Hahah!” Totally Aaron! 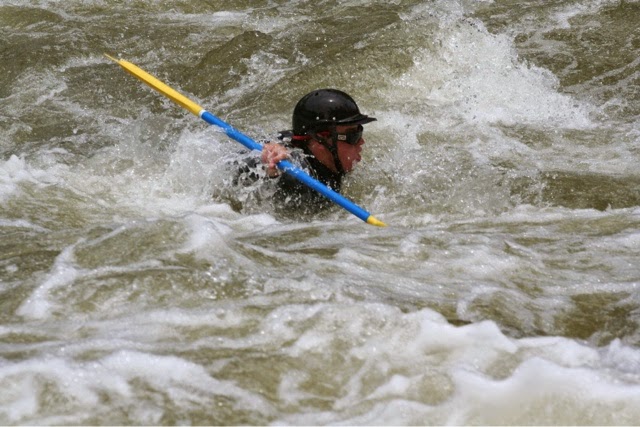 What makes his movies pop isn’t just the stunning drops and Class V gnar he punishes, it’s the Wallaces. We asked him about that.
DBP: You’ve taken some nasty Wallaces, but not many considering how much Class V you’ve run pretty much blind or at least first time this year. Any of them stand out?
AE: “The hardest I have ever been Wallaced is at Benham Falls. First of all my buddy got stung in the face 30 times by hornets, then we swam a couple of big fucking holes… then got some serious downtime in an undercut, popping up only to swim through a big strainer! Stuff like that scares me off for a couple days… Maybe go run some class 3 for a couple days, then get back on it, ha ha! Everyone crashes, though sometimes harder than others.” 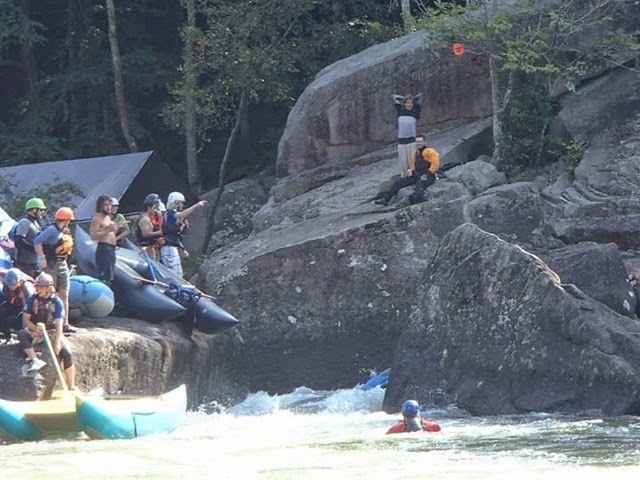 The Dirt Bag Paddlers are known almost as much for their epic parties as they are for their fearless paddling and entertaining feeds on Facebook, Instagram, and this Magazine. Aaron has been instrumental in the development of the brand, but in particular his partying has been nearly as legendary as his paddling.
Aaron fired up Frank Fest in August (stay tuned to our Facebook page for notification of this year’s event) to celebrate the life of a much loved raft guide and Original Dirtbag Paddler who passed away in 2013, Frank Sade of Kosir’s Rafting. The day was spent hosting a raft rodeo in Terminal Surfer, a well known sticky hole on the Menominee River at the last Pier of Piers Gorge, complete with funny score cards and lots of beer drinking. The Barn Party was held the night before, a glorious affair complete with dance partying with DJ PocketFuzz, beer pong, and raft wrestling. Guides from all of the local outfitters were in attendance, and the air was thick with smoke. Then, around 11pm, the black powder cannon came out, the dog ran off, and “Coco Come!” was born…
Then there was the hugely successful, and highly controversial, Spread The WALLACE Party at Gauley Fest in September. Aaron was front and center throughout, playing his favorite cuts from the back of his van and wearing a stretched out WALLACE MAKES ME WET girls shirt during the Wet TeeShirt Contest (pouring the water on the willing contestants). He also was one of the “Ring The Bell” instigators (getting pepper spray on his hands courtesy of the county sheriff, which led to a pretty good burning sensation down below on the river the next day… WALLACE!), and he paid the price of parking in the epicenter of the party – where DBP hosted a few hundred paddlers for free food and beer while The Kalob Griffin Band played an accoustic set by the bonfire – when someone Wallaced his Dirtbagmobile with ketchup, mustard, and relish. 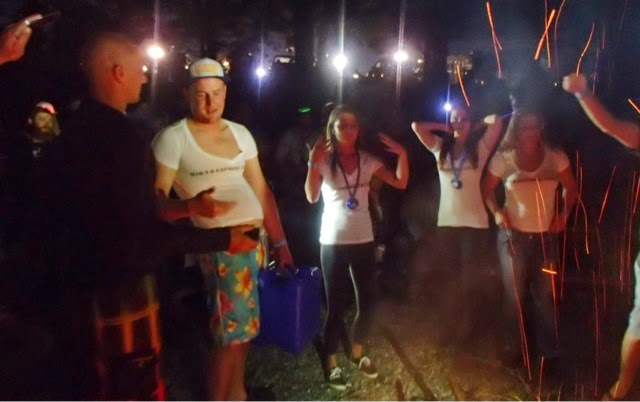 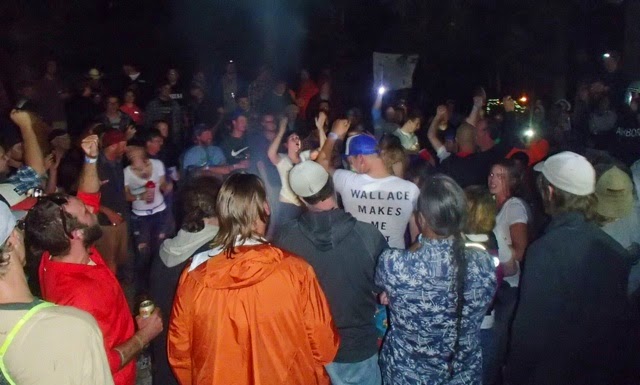 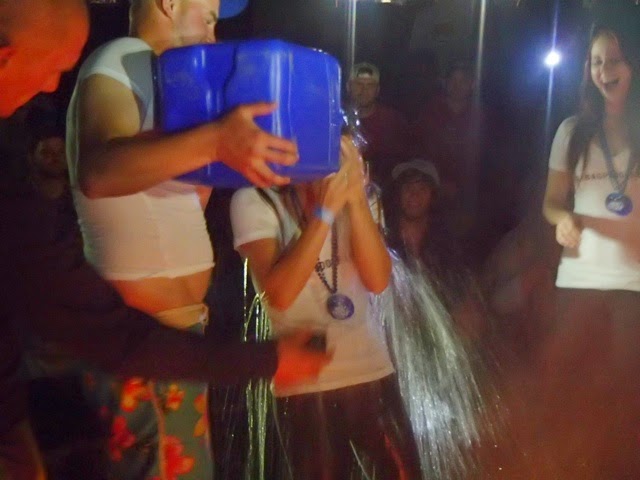 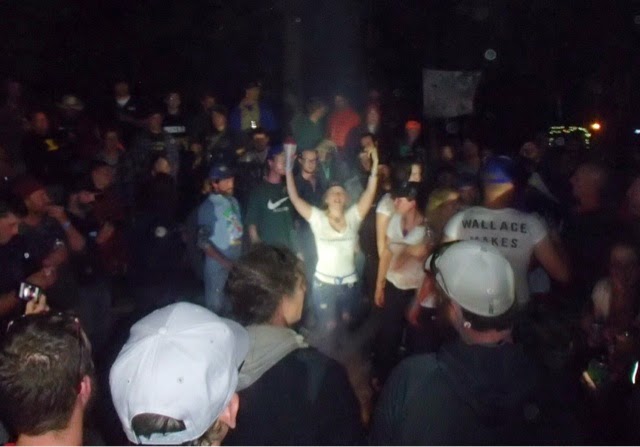 January in Wisconsin, where Aaron winters, is a time for reflection, and for looking ahead to the upcoming boating season. We asked him about his plans.
DBP: Last but not least, you’ve accomplished SO MUCH already… It must be hard to not get jaded once you reach these heights. What does 2015 hold in store for Aaron Erdrich?
AE: “Big sandy, North fork American, the Moose in New York… A trip on the Wautoga in Tennessee or a multi day on the Upper Animas in Colorado would be fine with me! Little River Canyon in Alabama is on that list, and Virginia sounds cool – there is still a lot out there!
Back home, I would like to get on more North shore stuff up in the Duluth,Minnesota area, like the Split Rock and Devils Track, both of which have not been rafted to this point.
I would also like to start running my own commercial company, possibly this upcoming spring, here in Wisconsin. I am looking for some used wet suits and PFDs.” 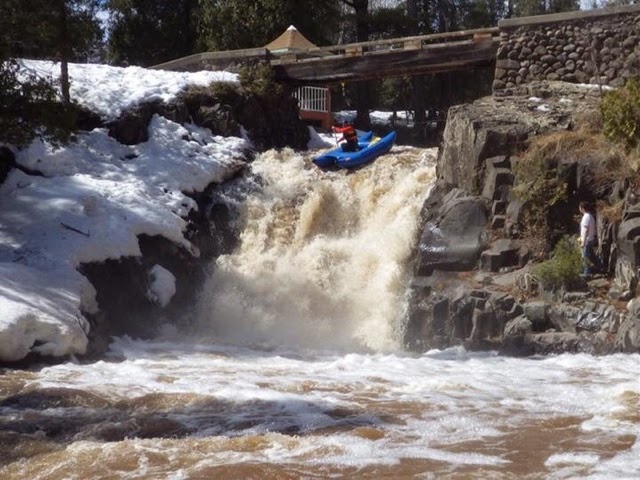 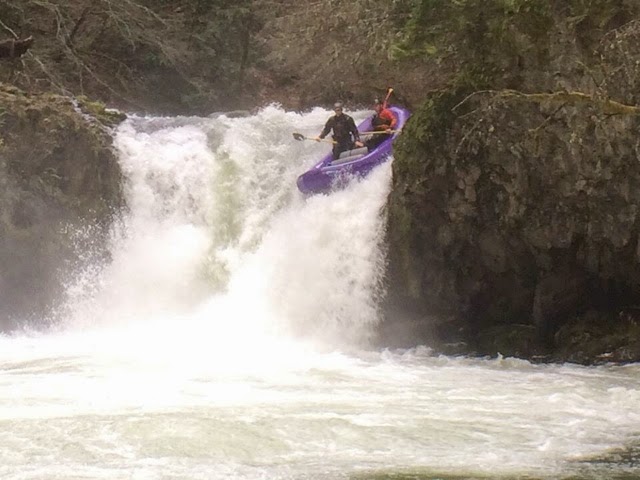 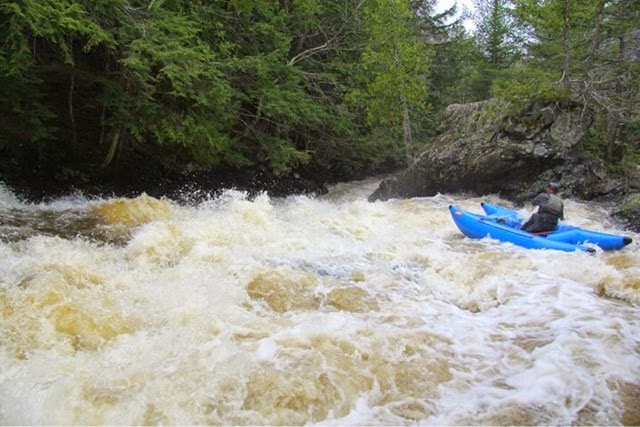 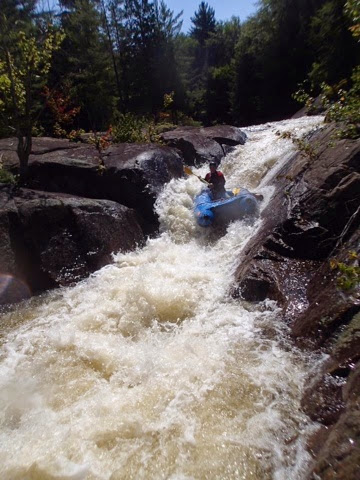 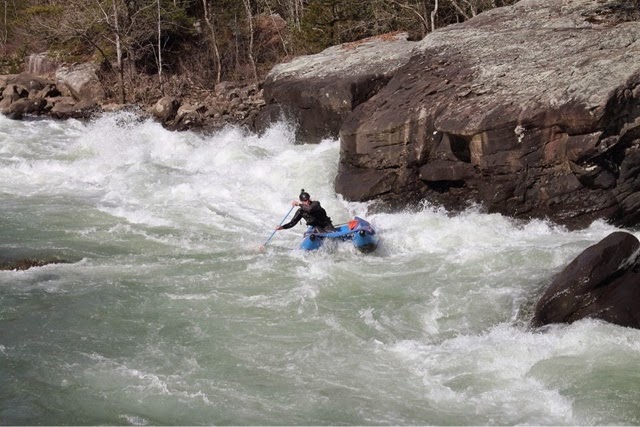 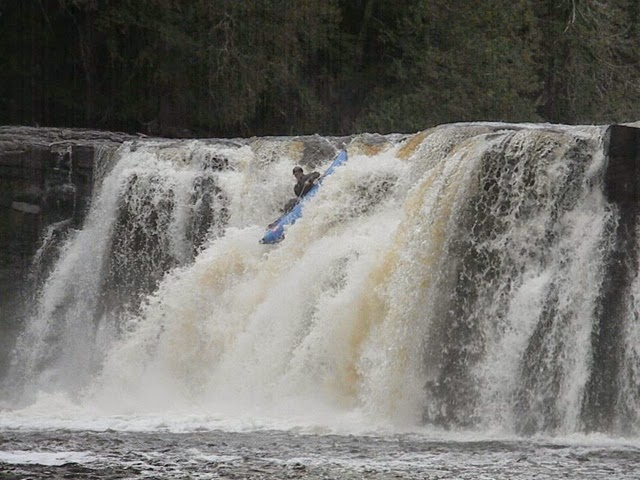 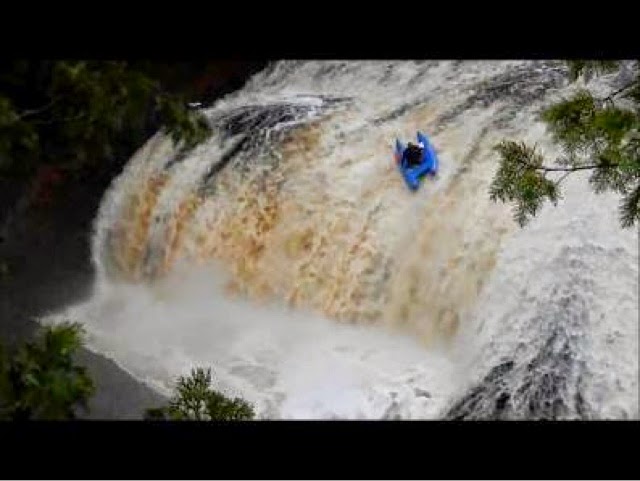 They don’t get, or go, much bigger than Aaron Erdrich. The unofficial Dirtbag of the Year in 2014 has only begun… Watch out! And have that throw rope ready. But, he’s probably gonna pass your boat up, and wait for YOU in the eddy below that next stout. 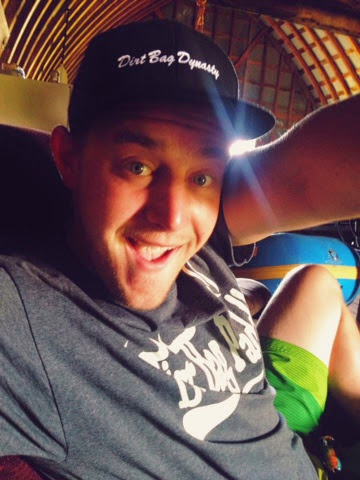