Kelly has been with the Dirt Bag Paddlers for a LOOOONG time, since a few months after our official formation in August 2013, but she was always one of us in her heart. We came to know her when our brother Frank Sade hitchhiked out to West By God from Wisconsin two Gauley Seasons ago to push rubber, landing in the same class of Gauley guide trainees as Kelly over at ACE. If Frank was her friend, which he was, so were WE. 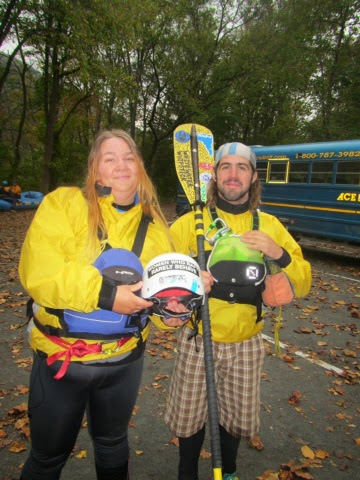 Kelly has an awesome story of coming home to the river. It’s one thing to embrace and live the lifestyle, it’s quite another to enter into the fray, quitting a good paying job and moving to another state in one’s mid thirties to follow The PASSION that is raft guiding. She still guides at ACE, and also runs Team Gung HO Pirates – and goes Sideways every Sunday. Here is her tale….
“It was told to me by one of the raft guides that I worked with: ‘You will either love the river and want to be part of it….or you will hate it for the rest of your life.’  I found out early in life that rafting would become something not only would I enjoy….but become just that. My life. 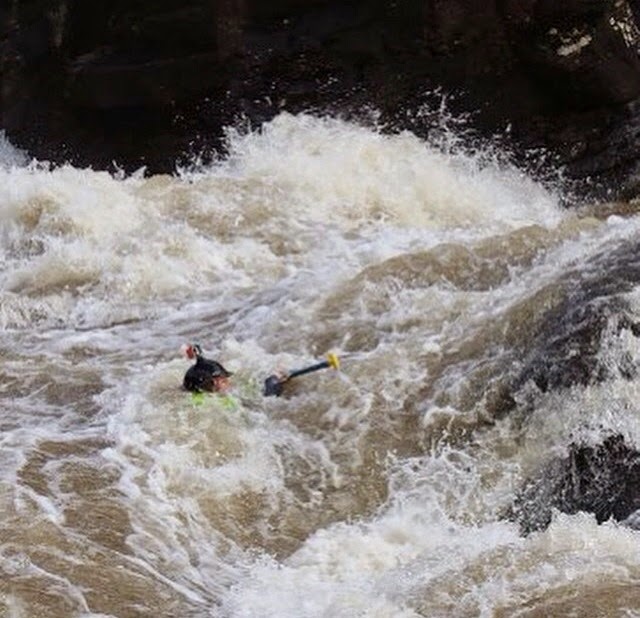 The story started in 1994.  I was 16 years old when my sister asked me to join her and friends on a rafting trip on the Upper Gauley. I have always been adventurous and thought “why the hell not.” Things were going good till we got to our last Class V, Sweets Falls, the mighty 14 foot cascading waterfall.  Our guide Eileen told us to get down just as we were dropping. The last thing I remember was being thrown into the water. It happened so fast….  After it was all over I had slammed my head twice on rocks and took a good swim. My sister looked at me as they got me back into the raft..and said “Are you ok?????”  I grinned and went “yup just fine… lets do it again.” That’s where it all started.  Though it took a while to get here…. it’s been a journey that will always be in my heart.
Becoming a raft guide was never in my plans. The transformation started back in 2009. I had rafted before then on the Lower Yough a few times but that was about it.  I had gotten my family and some friends to head down on the Lower Gauley that fall of 09. I knew I had missed it. And the next year I planned a trip on the Lower New in a 12 footer.  My friends were not super excited about that, especially since we fell in twice.

At that point I knew it was time to get back onto the Upper Gauley.   The last time I was there was back in 1995 when we about taco’d into Pillow Rock. The next year I paddled more trips on the river. I had started a group called the White Water Pirates for fun. I got onto the Cheat in WV that spring, then the Lower New and back up on the Upper Gauley.  This is where I started to venture into the Go Pro scene.
I had watched many YouTube videos and bought a camera for the Upper G trip. Along the way I started to make good friends with the folks down in WV. They would recognize me when I came in from the different outfitters. During the end of the 2011 Gauley season I started talking with a nice couple from NC. Her husband was a raft guide over at Ace. I had told her I was planning a trip to Ace next summer for the lower New, and she recommended her husband to me.
So that summer, after doing a spring high water trip, I came out to West Virginia and rafted at the end of June. My new friend showed me a lot about the river, how it works and how to navigate.  At that point I was starting to get interested in the guide scene, though I still had not got over my nephew’s near drowning while surfing on the Lower G. I was hesitant on that still. Later that summer I got on the Upper Yough and ran some duckie trips down on the Lower Yough. 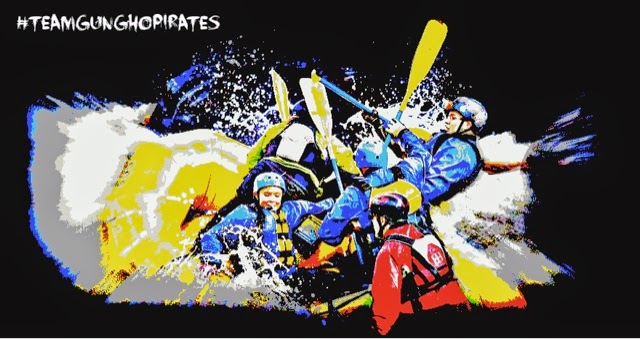 But the big show was going to be Gauley season.  I had planned 4 trips down. The first one was the first day of the season. It was déjà vu for me at Sweets Falls 18 years later. Guide yells out… “yeah it’s been 6 years since I flipped here.” For many that’s river karma waiting to happen. As we dropped in, he was already making commands to back it up. I knew something was about to go down.     We flipped and this time I knew I was not going for the same swim I took before… What a way to start the season!
I came back the next weekend and did it again. Then my last two trips were with my friend from ACE that I had over the summer. From that point on I knew I wanted to come and train.  I had finally gotten over the fear of surfing, after he gave me a good speech about it before the last trip. At the end of it all he said, “you should come down and train! I think you would like it.”

At this point in my life I was already at a good job, working the 24 hour shift for a private EMS company up near Cleveland, Ohio.   So I had to make a decision: stay with the job that was starting to stress me a lot, or follow my passion, where I would not make much money but have so much fun… I decided to take that chance and take a pledge of poverty and go for it. 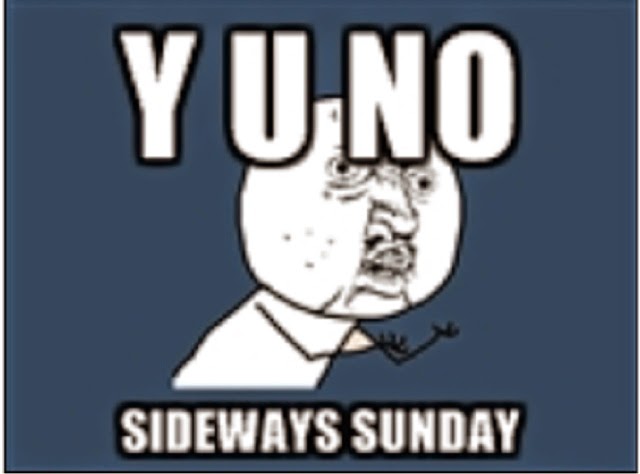 That March I went down to ACE for guide training. Going from guest to guide was a different feeling, though I have seen the river many times. Once training was over it was on to swift water classes and many ride alongs on the river. My buddy who had guided me on the river gave me a lot of advice, from the offseason to when I was training. We would talk about what I did along the way. I got to ride along with him a few times before my check out run on the New River. 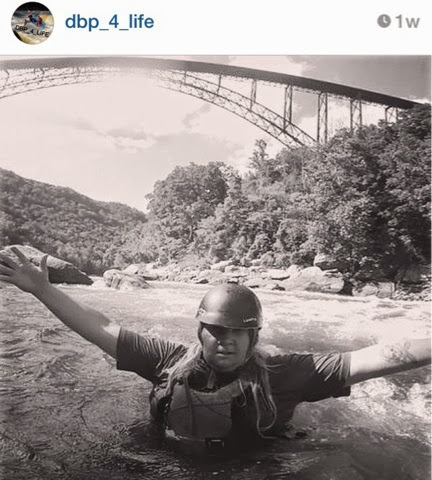 Then the day came. The New that year was really high from rain, and now I was taking customers down the river for my first time. You don’t have other trainees in the raft with you anymore, just a check out guide and 8 other folks. I remember my friend saying, “I would wish you luck…but I know you dont need it. You have the skill… just get out there and do it.”    I was a little nervous at first, watching a raft in front of me flip in Middle Keaneys… But we killed it on the rapids. The day was over  and I was done. I had passed.
My friend gave me a big hug as he knew before me. Checking out was a great feeling. I also checked out on the Lower Gauley as well.   I even brought my friends and family down the Upper Gauley. I started to feel more gung ho…more adventurous. Seeing the summer Gauley for the first time, R2ing the Upper Yough with a buddy of mine, and doing more things like duckying the Lower New and the Gauley, those first two years were amazing. The decision I made worked out, even though there were some bumps in the road…it worked out. After the 2014 season I changed the WWP page to Team Gung Ho Pirates. It’s a place where I can connect with a few of my friends who I have met along the way. We usually like to take bigger trips when we can. We plan to do the triple play team extreme run one weekend of Gauley season this year. 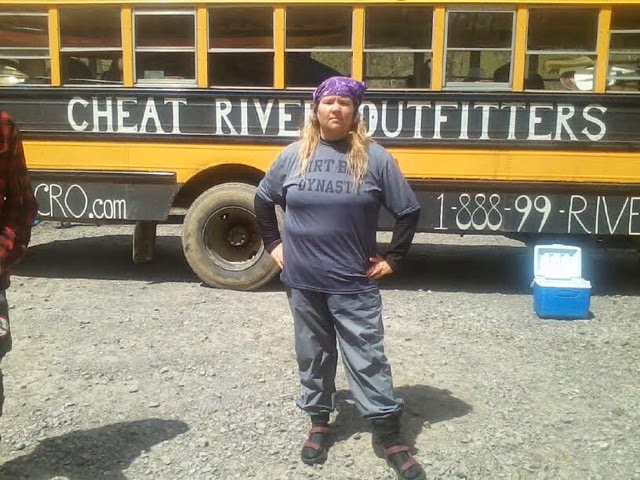 In 2013 I met a raft guide named Frank Sade who worked up in Wisconsin, who was down here because he wanted to work on the rivers of West Virginia.  We R2ed the Lower New, and I learned what Wallace was on our first major rapid, Upper Railroad. Only a few weeks later I found out he had passed away on his Facebook group page, the Dirt Bag Paddlers.   I had made a video from our trip and dedicated it to him.  I started talking with the rest of the group thru the offseason, and they invited me into the Family. That May I met a few Dirtbags in person at Cheat Fest, then I rafted and hung out with the whole crew at Gauley Fest. We dedicated our trip on the Upper Gauley to our lost buddy Frank, and got Wallaced at Sweets! We have much more to do in 2015. I can not wait.

2015 will be my third season as a raft guide, and there is much more to do and explore. As they say, you are always training. Never stop training… Because the day you do… then you should just hang up that paddle and go home.  But my motto is… GO BIG Or GO HOME….. or now…. GUNG HO or GO HOME. Just remember to follow your dream even if you have to sacrifice something. Never give up that dream. The great friends I have met along the way have been worth it…. even with all the swims, bumps and bruises that I’ve gotten. You are always in between swims……WALLACE!!!!!!”

0 replies on “DIRTBAG PIRATE QUEEN ~ The Story of Kelly Gladen, in her own words.”

That was a good read! Proud of you-Go Big Highside Kelly!

Thanks guys for all the help along the way as well.