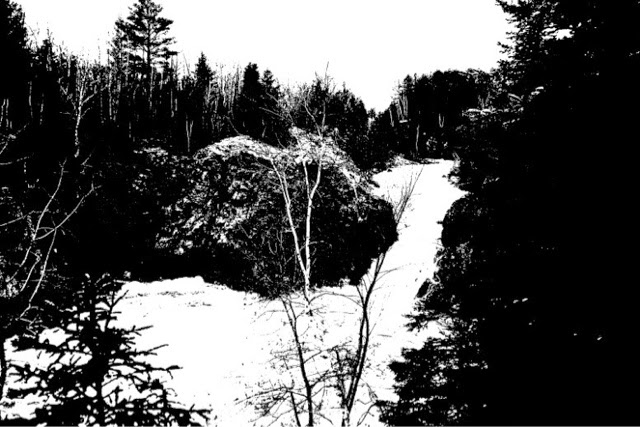 Almost Always
EDITOR’S NOTE: Nora Whitmore’s article on the Lester Race in Duluth MN first ran in her blog last February. We are pleased to run it here because it looks as if THE LESTER WILL RUN THIS WEEKEND! After talking with Nora, who is down south paddling her canoe at ALF, (she was wrapping up a day on the Tellico) we can report that she’s disappointed to miss this year’s festivities. Who would have thought the river would run a few weeks back with Minnesota locked in an arctic death grip? Such is the life of Spring boating in the Upper Midwest… 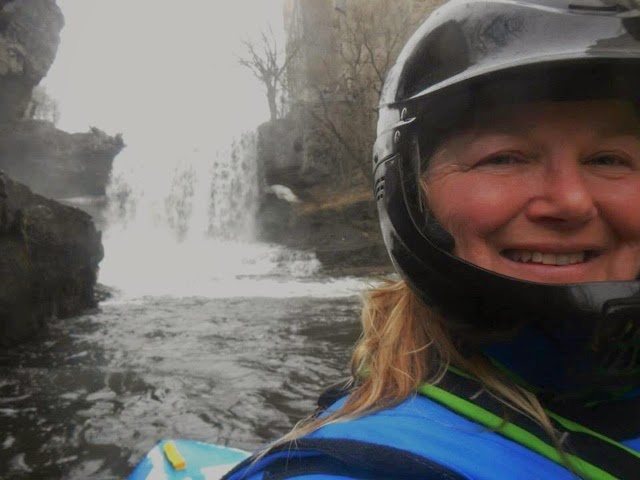 Nora also is Dirt Bag Paddlers’ WOMAN OF WHITEWATER WEDNESDAY! Her passion for whitewater paddling encompasses everything she does, and she is a TRUE WOWW! From her writing and photography, her padding blog, her work instructing (ACA certified in both kayak instruction and River Rescue), her efforts with the Midwest Women’s Clinic Crew, her travels all over the country, paddling kayaks, rafts, and open boats, most important to her – her efforts organizing the Vermilion River cleanup these last 8 years… her EVERYTHING SHE DOES!, in all of it she is a Queen and we totally dig her! Cheers to you Nora! Keep sending it!!

As ancient as evolution, a shiver of excitement runs through the collective souls of a united tribe of men and women.  Not quite fully aware of the cause but knowing something is triggering the feeling of anticipation of something coming.   Instinct?  The sun, older than time, gracing us with a little more comfort each day?  The scent of the breeze?  It may be dead of winter in Minnesota, but spring is so close we can feel it with our souls. 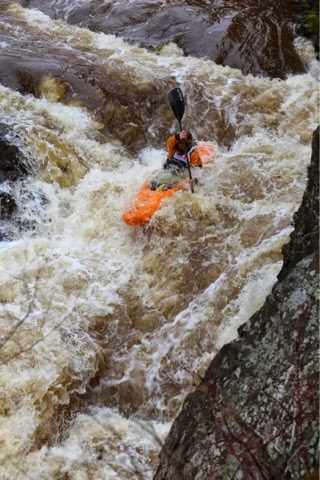 Limbo Falls
With the spring melt comes the thunderous power that is unique to the North Shore of Lake Superior. Creeking season arrives fast and furious. The tribe is alive.  Frantic to catch the fleeting world class whitewater before it’s gone.  Each year it’s a different personality but it all starts in one place. Duluth!  With the Lester River.  It is the beginning.
Ryan Zimny had a vision a few years ago. The Lester river, in the city of Duluth, is the perfect venue for a class IV/V race.  This was no easy task to achieve.  It isn’t dam controlled,  You get water when Mother Nature blesses you and only at the levels she determines.  The tribe, as malleable as the water we follow, adapts.  The race date is a guess.  Racers from all over the Midwest wait with their whole being  tuned to the weather.  Ryan makes the call. 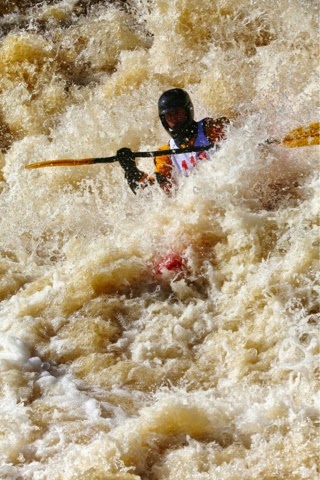 Race organizer, Ryan Zimny.
The inaugural race was held in 2013.  The year before was the Great Flood of 2012.  Things had changed on the river.  The pinnacle of the race was to finish after running Almost Always.  A class V,  25 foot narrow waterfall aptly named because it is “almost always” portaged.  A handful of young world class boaters probed the falls to see if the changes were acceptable. It wasn’t pretty. A little bloody. But no serious injuries.  Almost Always was taken out of the race and the finish was marked just before the falls. 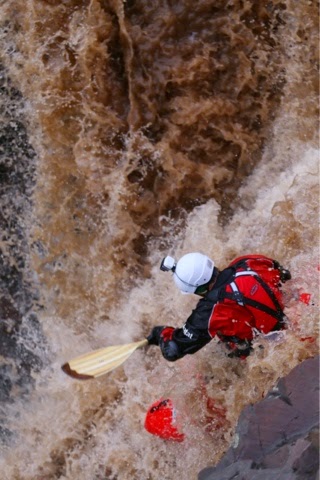 Chris Baer successfully dropping Almost Always.
The level was good and as friendly as an extreme whitewater race can be.  Spectators were able to line the banks all along the river due to the road and a wonderful  city trail system that follows the river.  The first race went smooth.  Volunteers and safety working together like a precision machine.  John McConville taking first place!  The Lester River Race was established. 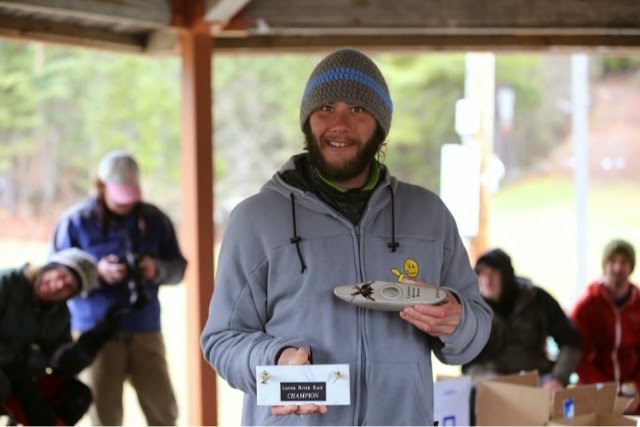 Jackson Kayak’s John McConville.  Two time winner of the Lester Race!
The winter of 2014 was a very good year for snow.  It laid silently in the watersheds of the frozen creeks.  The promise of a spectacular creeking season.  The melt started like a Highlander kicking in the door on a tavern.  It arrived and we went to meet it.  Ryan had made the call and the race was on for the following weekend.  The week of the race the creeks were in a rage.   Mother Nature was a sassy lady demanding only the best from those who would try her creeks. Dealing out serious injuries to some who attempted to ride. Throwing a midweek snow storm at us like a snowball to the face. The Great Lady laid down her challenge! 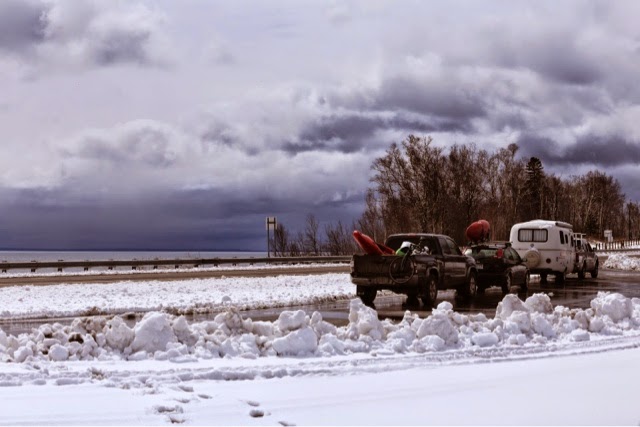 Midweek scouting for water.
Saturday race day came!  The water was raging.  This year four ladies considered running the race.  Myself one of them.  The other three were strong beautiful paddlers.  Young women who had never or rarely ran the Lester River before and that is required for the race.  The men, always happy to help the women,  put together a pre race run to introduce the ladies to the river.  All three ladies walked off before the end of the run and two of the men came away with dislocated shoulders. Naked Man Rapid was taking its due.  There was no doubt that this year was going to be epic.  Some soul searching was done by all the paddlers, men and women alike, and the race roster reduced.  Anticipation was high. 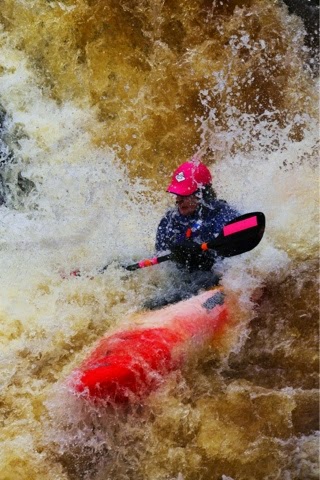 Danielle Magnuson dropping Limbo Falls in the pre race run.
The second Lester River Race was fast! With all the pre race carnage the actual race went off good with just a couple of  DNF’s and a few stitches.  Congratulations to Jackson Kayak’s John McConville for taking first place again for the second year.  This year the river banks were lined with hundreds of spectators.  The race is firmly established as a rite of the Northwoods Spring. 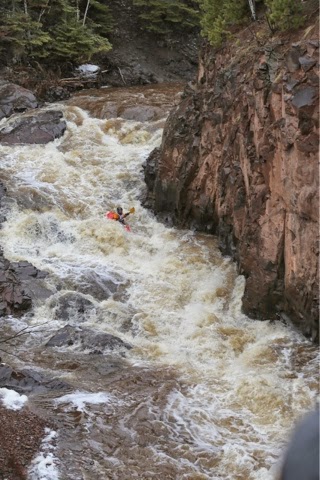 Oh Shit Rapid just before the finish line.
Three is the charm!  2015 is here.  The race is on every paddlers mind. The third Lester River Race!  Who will race this year?  Who will win?  The Midwest is a rapidly growing community of boaters with a history unique unto itself.  There is a consensual awareness that this race, the Lester River Race, is going to be a huge part in our destiny.  An epic novel with a different chapter written each year by all of us and edited by Mother Nature.  Will you be racing?  Can you adapt to brutally freezing water with occasional ice chunks?  Can you run the intro rapid and Limbo Falls? Are you brave enough to face Naked Man?  Mini Octopus? Oh God?  Oh Shit?  The conditions are far more brutal than other extreme whitewater races. This is the North Shore and it’s not for everyone.  Is it for you?
Lester Race Footy
Racin Lester Gnar
A link to Nora’s Blog:
seaboopugs.blogspot.com
Lester Race on Facebook:
https://m.facebook.com/LesterRiverRace
AS OF TODAY WE ARE STILL WAITING ON RYAN ZIMNY’S FINAL CALL ABOUT THE WEEKEND, BUT IT LOOKS LIKE THE LESTER WILL GO. KEEP UPDATED ON THE KATEST INFO ON THEIR FACEBOOK PAGE! DIRTBAG ADMIN AARON ERDRICH WONT BE ABLE TO PADDLE BECAUSE OF RECENT KNEE SURGERY, BUT HE WILL BE IN ATTENDANCE…. AND HEY MAYBE HE WILL WRAP IT UP AND SEND IT!!