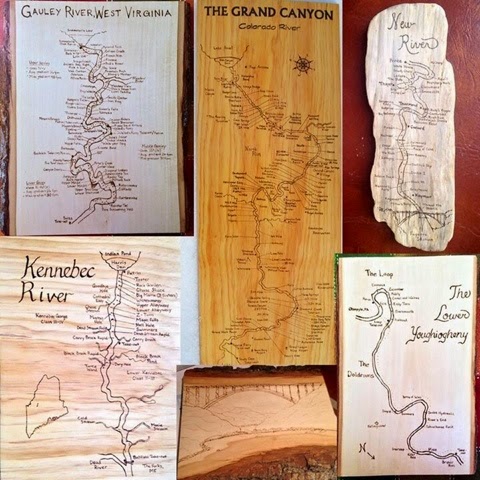 Editor’s note: We first met Mika Gauley Fest weekend at the Upper takeout last September. I had just dislocated my middle finger pretty badly at Postage Due after properly celebrating a Sweet’s WALLACE with a gallon flask of Frank (strawburritas) so in honesty I wasn’t in on the meeting, but I learned of the happening from the other Admins and went to check out the Whitewater Wood Art Facebook page. I loved what I saw, and struck up a friendship with Mika.
We are honored to use her woodburning of the New River Gorge Bridge as our cover photo for this month. I approached her, explaining that there was no better representation of what we hoped to achieve with the theme of the month (mARTch) than her art… And thankfully for us she accepted! We are stoked to share her story of paddling and art, and hope that it inspires our readers who paddle to explore their artistic side, and our readers who don’t paddle to get out there and explore our rivers and the lifestyle that we live and love as Dirtbags. Cheers, Mika!! 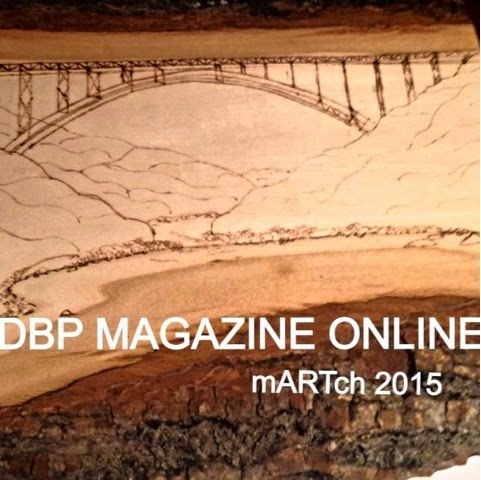 I started kayaking in Autumn 2012 in Cincinnati, Ohio through an introductory whitewater kayaking class offered by the Cincinnati Recreation Commission.  After meeting my boyfriend Darek at the Stonycreek Rendezvous in Spring 2013, I began driving out to West Virginia on a regular basis to go kayaking and rafting with him.  Although I started with kayaking, I got pretty into R2-ing with Darek since it allowed me to get on much bigger/harder rivers right away (like the Gauley). 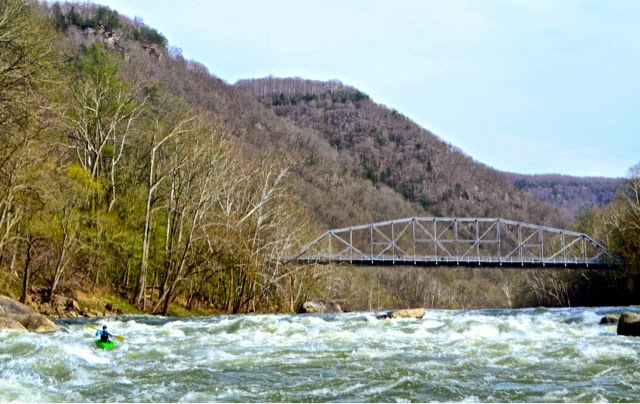 By the time 2014 rolled around, I was ready to get serious about the whitewater lifestyle, so I accepted a six month AmeriCorps service position and moved to Thurmond, West Virginia.  For six months, my front yard was literally the put-in for the upper section of the New River.  Moving to West Virginia was one of the best decisions of my life; I was able to get on the river nearly every weekend.  At the end of my AmeriCorps term, I moved to northern West Virginia near Morgantown and spent the rest of the season enjoying those local rivers. 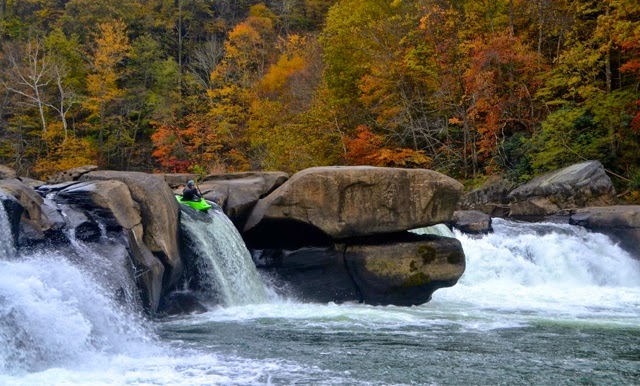 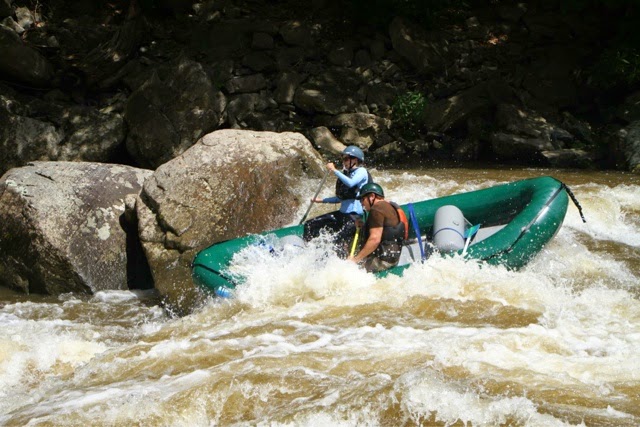 I paddle a very old red Eskimo Salto with a cracked bow covered in duct tape (a $70 bargain that I fully intend on paddling until its destruction).  I have a lime green Jackson Star as well.  Darek’s raft that we R2 is a green Aire Super Puma. 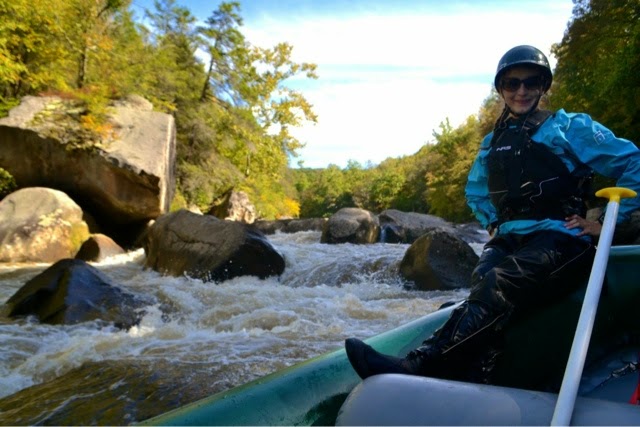 Currently….
At the end of Gauley season Darek and I left West Virginia to winter in his hometown in New Jersey.  He had dislocated his shoulder a few too many times over the years, and had to have surgery to repair the labrum.  We both miss the mountains and rivers very much, and as soon as he is recovered we plan on moving back to whitewater country somewhere.  We’re not yet sure where we’ll end up. 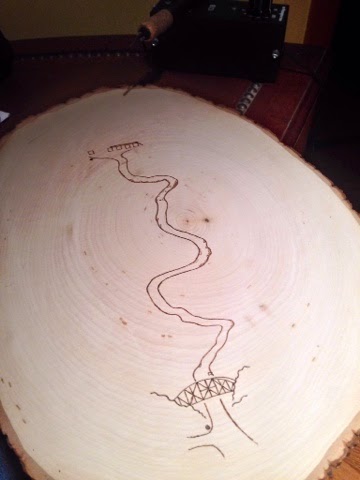 Art Background
I’ve never really thought of myself as an artist.  A crafter, yes—I’m definitely crafty.  I was that little kid that was constantly surrounded by a mess of glue, paint, glitter, yarn, and felt.  I never took art classes in school, and even my college degree is a Bachelors of Science.  So the fact that I’m now being featured in this article for my artwork seems a little unreal.  But in a way, I guess, it all fits together.  My interest in maps stems from the GIS courses I took in college.  My favorite class ever was Stream Ecology, and my AmeriCorps service focused on water quality in relation to acid mine drainage.  My love of paddling supplies the last part of the equation.  Put it all together and you get woodburned representations of whitewater rivers. 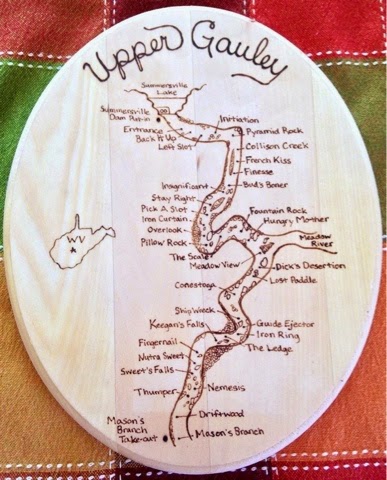 I bought my first woodburning pen for $12 at a Michaels in Cincinnati.  I had just returned from a weekend of paddling in West Virginia, and I was bored out of my mind and already wishing I was back on the river.  I doodled around on a piece of scrap wood for awhile, then flipped it over and made my very first river map.  I spent hours looking up information online, but eventually I had the Gauley River from the dam all the way down to Swiss burned into a cheap scrap of birch.
Darek later saw it and wanted it.  I refused to give him my shitty doodled mess, but he asked so many times that I eventually got a nice piece of basswood and burned him a Gauley River map of his own for his birthday.  I made one of the New River Gorge next for Christmas.  The first time he showed them to his friends I almost died of embarrassment.  I didn’t think they were very good and never intended for them to leave the privacy of the apartment.  I received more positive responses than I ever expected, and heard “You should sell these” from so many different people that eventually I decided to give it a try.  I sold my very first piece about thirteen months ago after doodling out that first Gauley.  I now use a fancy woodburning tool (from Colwood Electronics) that allows me more control and variability than the old $12 one could.  Its temperature control dial means that I am no longer limited to softwoods. 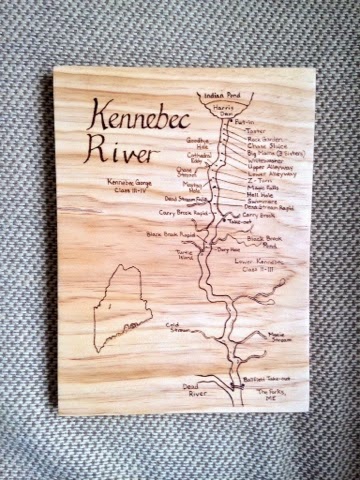 The process I use when creating new river maps varies river to river; I scour the internet searching for any information I can find.  This usually includes reading its AW entry and spending hours zooming in and out on Google Earth.  I try to find multiple guides to the river, since there’s usually contradicting information, like multiple names for the same rapid or some descriptions that are just plain wrong.  If I find multiple sources agreeing on a rapid name, then I’ll still have to decide between three different spellings of it.  Sometimes I ask people who are very familiar with a particular river for help as well.  Even more rarely I watch Go Pro videos of people paddling down that river on YouTube or Vimeo.  All in all, I spend hours researching before I start burning. 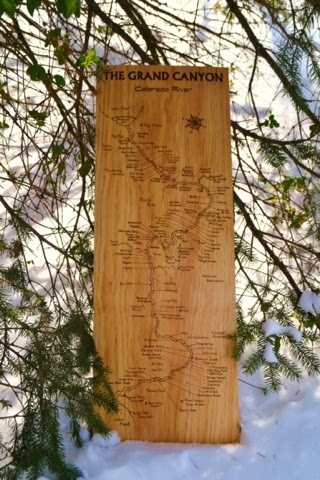 The Grand Canyon in this pic is the first Grand Canyon I did.  It was a custom order, and it also happened to be the very first map I made of a river I’d never been on (the Kennebec was the second).  It was a true test of my research abilities– I think I cross-referenced five or six online guides to get the rapids (and their spellings) straight.
I’m also including a picture of my woodburning tool in case some people might find it interesting.  Colwood Electronics is located about 30 minutes away from Darek’s parents’ farm here in New Jersey.  I actually went to their tiny factory to get it.  I met all their staff and they let me try out different models and tips before buying.  Very nice people. 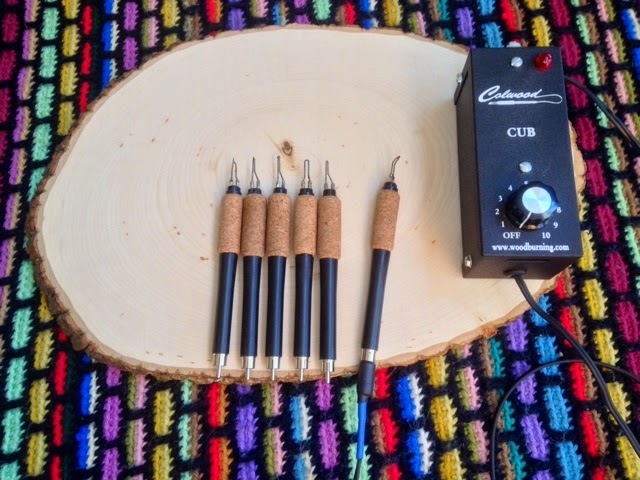 Although they sell a few different models, I chose the tiniest one, the Cub.  My reasoning was that a tiny woodburner that is easy to pack is more conducive to dirtbagging.  I found that it is more powerful than I even need most of the time, so it’s perfect.  As a reference point I burn driftwood with a heat of 3-4.5, and soft woods (pine, basswoord) around 4.5-6.  So yes it’s definitely a powerful little thing.
For the tips I chose to go with the slightly more expensive fixed tip system — meaning that I have multiple pens instead of one pen with changeable tips.  I like this better since I can switch out pens and continue burning immediately without waiting for them to cool or burning myself.  The pens I have so far are (left to right) a needle point, small and large ball points, large calligraphy, general drawing, and a shading tool.
Resolutions and Goals for 2015
1) Improve my kayaking skills!  I’d like to see the rivers I’ve rafted from my kayak’s perspective too.
2) Travel and paddle new rivers.
3) Get my hands on a Shredder or a Paddlecat. Darek is going to want to go crazy kayaking with his new shoulder, and the Super Puma is a little too heavy for me to R1 myself (It weighs more than I do).
4) Diversify my store inventory with new and different rivers.  I want to do some more of my local favorites, but I’m also planning on adding rivers from farther away too. 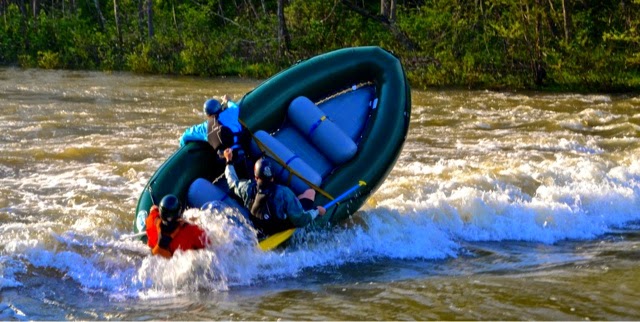 A note on this Stonycreek picture– I was high siding so hard while the boys were trying to flip us.  The only reason they won and flipped us was because Shane McManus grabbed my lifejacket and dragged me down with them.  If you look at the picture you can see his arm reaching up to grab my PFD.
Whitewater Wood Art on Etsy
https://www.etsy.com/shop/whitewaterwoodart
And on Facebook
https://m.facebook.com/profile.php?id=100007825905929&tsid=0.3015519001055509&source=typeahead