A DIRTBAG DOES THE BIG DITCH – Peter Ely’s journal of his 2015 GrandCanyon mission PART FOUR. By Peter Ely 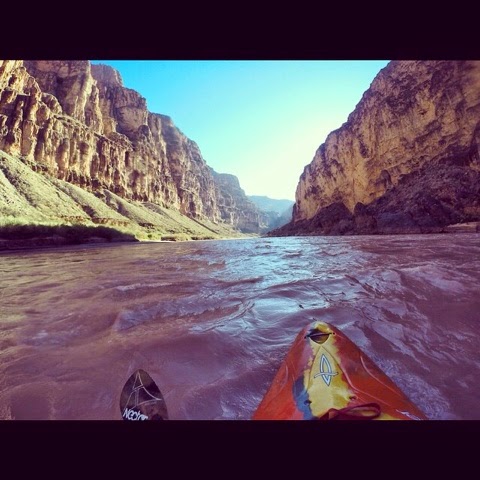 Editors: Kayaker Peter Ely, a transplanted Californian who makes his home in the mountains of North Carolina, recently completed a mission down the Colorado River in pursuit of the ultimate Good Livin’. He shares his journal entries with us in this series, which will run Tuesdays as we travel 20 days with him. ENJOY!!
PART 4
2-8-2015 (day #15)
We pack up early at Camp 161.3 for a full on day on the water, crushing 13 miles of flat water before stopping for lunch. Then it’s time to put back on for 6 more miles of flat water before running into Lava Falls. Lava is the largest rapid in the canyon. Such an impressive rapid: from the scout you scramble up some volcanic rock boulders and look down at the butte. Ehud and I quickly see our line and decide to fire it up while the rest of the crew takes a gander. We careful make our way back to the boats. We strap in and I give Ehud a paddle slap and tell him, “keep that stick on the ice”. And we send it.
So much good. I drop into a confusing lead-in to punch a lateral and plug a chundery hole and hope it doesn’t take my lunch money. We run pretty steezy lines and decide we want to watch the crew shoot through. Brett greases it first with a beautiful raft line. We know Andrew has something planned when we see him turn the corner in his jersey… Sure enough, he goes big and almost flips on the big wave, ditching his oars to throw a high side to keep it down. Jack and Dan go last, both flipping in the hole. Jack makes it back up after a little time talking to the fishes, but Dan is not so lucky. A shitty swim leads to a quick recovery though, and all is well.
We have us a little party on Tequila Beach before putting on to more flat water. Luckily it’s only another 5 miles till camp. Such an amazing day, and much needed. I love me some Lava.
(RIVER MILES=24)
2-9-2015 (day #16)
Well, we’re taking a layover day after all the excitement yesterday. Posted up at 185 for the day, and loving it. Andrew, Ehud, and myself go for a climb through the canyon behind camp. It is a good time and we catch up to our first scorpion in 16 days. The hike is very tedious from all the cryptobiotic soil, which is basically a living soil that is growing and can be hundreds of thousands of years old. Needless to say, walking on it is a big no no. The hike is pretty great and we talk for a while, and I’ve gotten to know my team even better. The canyon has a funny way of bringing people together.
(RIVER MILES=0) 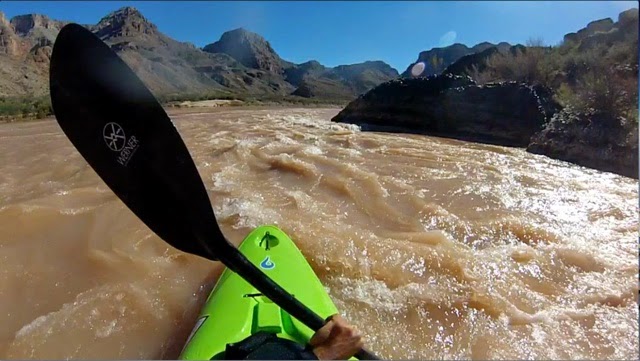 2-10-2015 (day #17)
Things are winding down now that Lava is in the rear view. You can feel it in the mentality of the group. Our journey is coming to an end, and though no one is talking about it, you can see it on their faces. It’s a little sad and it will be hard to leave such an amazing place. I think that the Colorado River holds a very special place in the hearts of those that know it – it certainly does in mine. I keep telling myself that there’s still a couple more days in this paradise I’m starting to think of as home, but I know that they will be gone as soon as I blink.
(RIVER MILES=21) 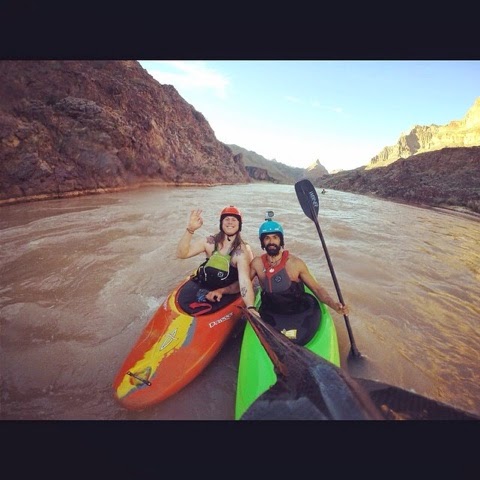 2-11-2015 (day #18)
Well, the only day on the trip that I don’t wear my drysuit and the only day I’m not in my kayak, I swim. I’m on Chloe’s raft just goofing off and we nearly flip in the hole on Rapid 209. I am ripped from the stern as it crashes on the rig. The raft stands straight up while I’m on the back, the hole swallowing the stern and when it surfaces, I’m not on it. I go so deep… luckily I have my PFD cinched tight, because I go for a ride! Its not that easy to swim or breath for that matter when its winter water temps and the only thing you’re wearing is cotton pants… Takes me a while to get out of the river and a long time to start breathing normally again. I throw up a little ice water, which is fun. But at least the crew gets a kick out of it… They stop laughing as I spend the rest of the day butt ass naked sprawled out on the front of the raft. I guess I’ve got the last laugh and my cheeks get some sun.
(RIVER MILES=13)
2-12-2015  (day #19 )
Well, theres no more ignoring the facts. Last night was the last time we will set up camp. It’s nice to have a last layover day at such an amazing camp. But reality has set in. Tomorrow morning, this all comes to an end. Waking up at 5am to break down camp and say goodbye to this canyon. This river has grown to be a very dear friend and I can not wait to see her again. But for now I will enjoy the little time we have left with each other.
(RIVER MILES=0) 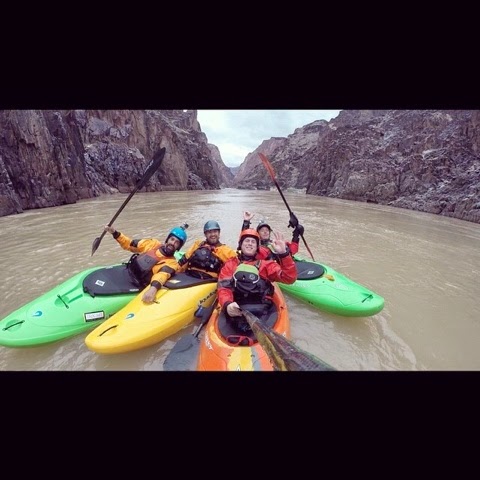 2-13-2015 (day #20)
The day is young and we break down the camp one last time and get ready to shove off. Ehud and I decide we don’t want to get our drysuits wet. Skin to the wind it is! Cause why the hell not? It’s six a.m. and barely not dark but we are doing sprints in our gear to warm the blood. Once we sit in our boats we charge nonstop to the takeout. Its not warm… maybe this was a bad idea, but too late now, better paddle faster!
Once everyone catches up to us (doing cardio at the takeout) we break down the rafts and deflate everything. Packed up and loaded. Time to drive to the airport and start dishing out hugs. Such an amazing experience. Such amazing people. Till next time!
(RIVER MILES=not enough)
Peter’s footy from the trip
https://vimeo.com/119887860
Read parts 1, 2, and 3
3/3, 3/17, 3/24 right here in DBP MAGAZINE ONLINE! Thanks Peter for taking us with!!
Like the article? Help us out! We want to keep bringing you the best paddling features and news.
Share
Tweet
Pin
0 Shares

KERN RIVER DRY UP ~ Climate Change and the end of an era? By AaronErdrich and “Chicago” Toughill