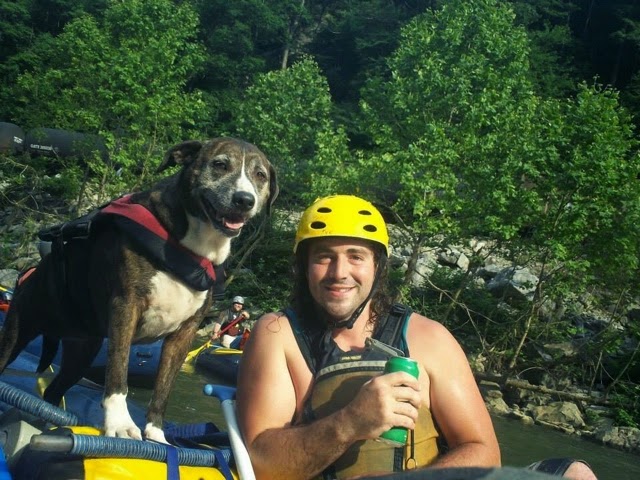 {Editor: Kassie was selected by popular vote as Dirt Bag Paddlers’ TOP DOG in our contest in February of this year (see the article from 3/6/15 TOP DOG – The Winners Profiled). Now her best friend Tye tells the crazy tail (wink wink) of one serious Class V pup!} 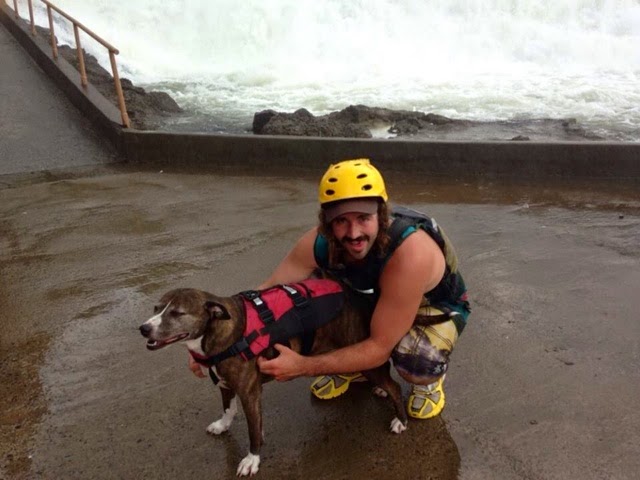 PART TWO ~ Class V Life
So come Fall time Gauley season, 2 years old with some miles under her collar, Kassi was now ready to take on some big juicy stuff. Kassi is super good about 3 things: 1) She always swims back to the boat 2) She swims away from rocks, and 3) She hysides like a champ. On the way to West Virginia we stopped in Tennessee for a week; that’s when Kassi took her first run on the Pigeon, the river she grew up on. When we got to West Virginia the first stretch I took her on was the Lower Gauley. R2ing with a dog! We went big at the end and flipped in the meat of Hell Hole on Pure Screaming Hell. Kassi’s first flip – go big or go home. After that we took Kassi down the Lower New. I have a great picture of young Kassi with the Gorge Bridge in the background. 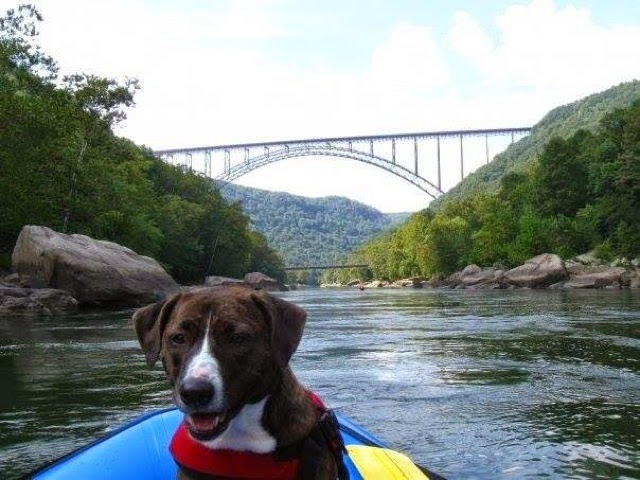 The next day we headed up to Maryland to run the Yough. On our second day up there we brought Kassi in the boat and she styled the Upper Yough, R2ing with the dog. It was crazy – at the end of that trip they cut the water off on us, and for the last mile paddle into Friendsville all of a sudden there was like 50 kayakers in front of us and 50 kayakers behind us, super crowded traveling down what seemed like a 5 foot wide river channel. All the kayakers were cheering on the Youghioghany pitbull! When we got back to WV for Gauley Fest weekend, Kassi ended her season with a trip down the Upper Gauley, making her an official Class V river dog. 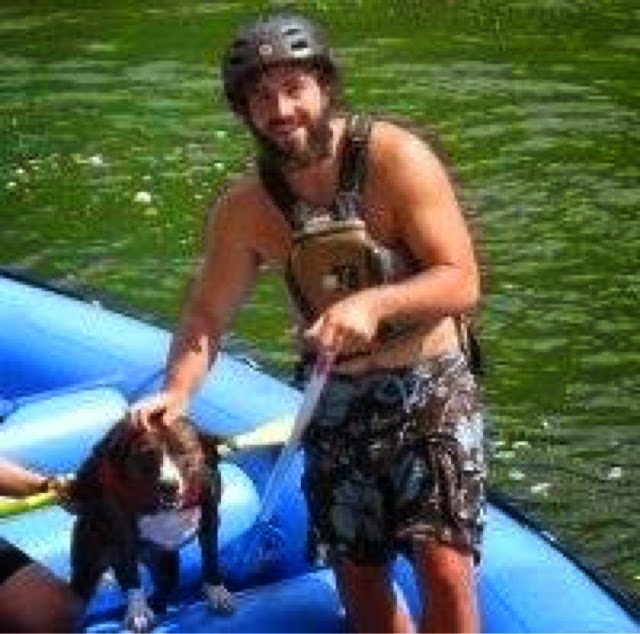 Alright! So the following spring (2010) Kassi and I head to Arizona for a super baller high water Salt River Season. Kassi got several trips on the Apache Falls to 2nd Camp run and once she got to go down as far as the Hudoo takeout. Kassi is a huge fan of sand. We’ve gone down to the beaches in Florida and Alabama and man she goes nuts. She loves it out in the desert because she can always find some sand to roll around in, hence her nickname “Sand Dog”.
On the Salt River in eastern Arizona most all the river guides live in a spot called 2nd Camp. And amongst all the river guide dogs there was one big alpha dog, a huge Akita called Altus. He ruled the roost, and none of the dogs would mess with him, none but one. I was walking through camp one day and Kassi was running around somewhere close by. Altus came out of the bushes and started barking at me, so I barked back at him. Then I turned my head and saw Kassi running at top speed, just spear tackling the shit out of that big ass dog! As Altus was getting back up Kassi circled around and ran over his ass again before he could get up. He got up and barked, all pissed, and walked away.  Kassi has always got my back! What a dog! 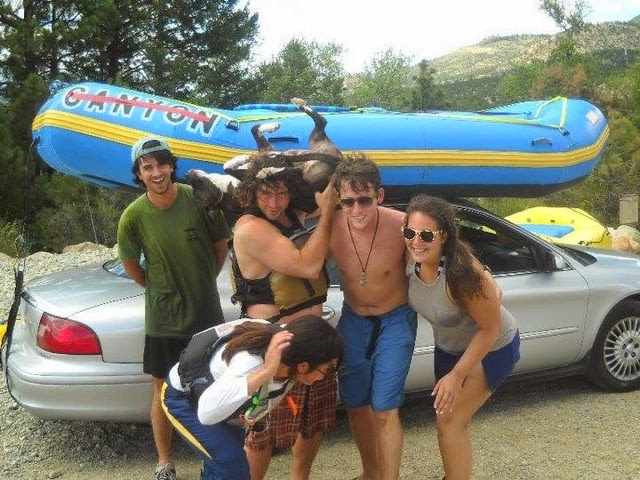 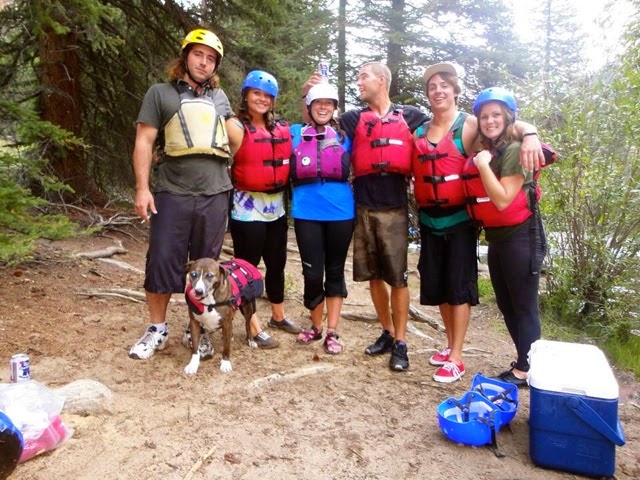 On Memorial Day we celebrated Kassi’s birthday at Four Corners, on our way to the Arkansas River. If you count that little corner in Utah I believe Kassi’s full count is 19 states she has traveled to in the United States. In Colorado Kassi got to start off on the Brown’s Canyon section of the Arkansas. Then she got to rock the Royal Gorge, followed by Big Horn Sheep Canyon. That season I spent a good time at the Blue, and had opportunities to take her down, but I didn’t because it was just too cold for short haired kassi. That stretch and the Numbers would have to wait till the right time. 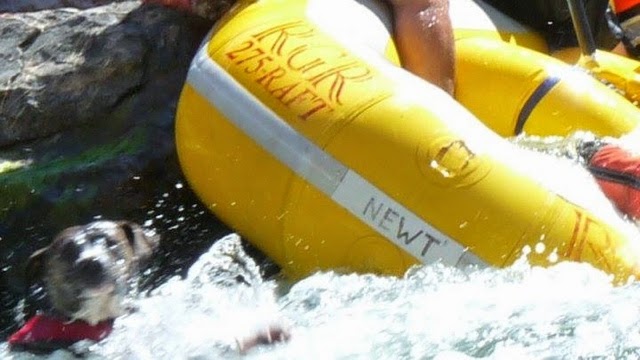 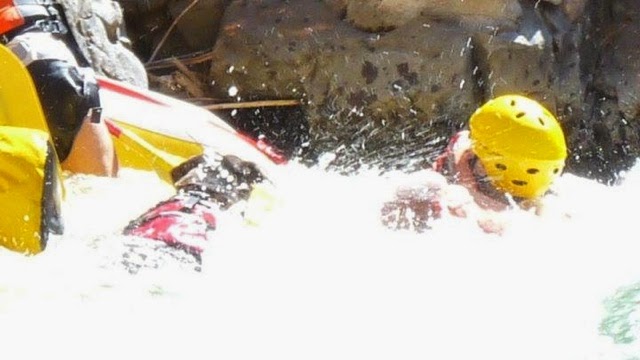 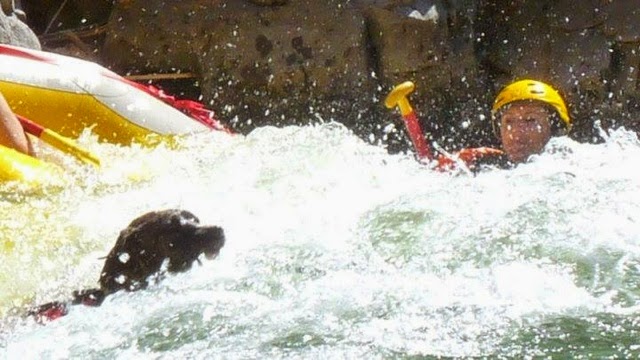 That Fall was a “ruff” one for me; I slipped on a staircase and broke my tailis bone in my foot. During my slow 5 month recovery some of the hair on Kassi’s face turned grey. She was so worried about me she was going grey. I later gave her the river name “old grey face.” The next season (2011) Kassi and I rocked it in Canon City at Royal Gorge Rafting. Kassi took several Gorge and Big Horn Sheep trips that season (including scoring her first ever midnight full moon run down the Gorge and one midnight run on the Big Horn Sheep). Later that summer Kassi got to rock an August warm water Blue River trip and she finally got to rock the Numbers section of the Ark. 2011 was also the year that Kassi got to rock 5 or 6 low water commercial raft trips on the Royal Gorge, making her an official checked out RGR river guide dog. 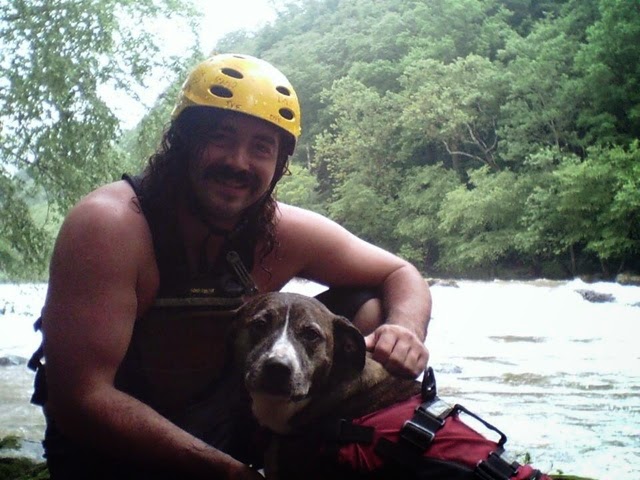 In 2012 we moved to Crested Butte, Colorado. That year Kassi got to rock several play trips on the upper Taylor River, one full day trip down the upper, middle, and lower Taylor, and one epic run down the upper upper Taylor (Fan Rock and Todd’s Slot – class IV) where she did the most epic doggie highside I have ever seen on Fan Rock. Also that year Kassi took one trip down the Royal Gorge with my neighbor in CB’s paraplegic friend.
Over that cold snowmelt water, we headed back to Tennessee for an epic high water 2013 Southeast river season. Kassi got several runs on the Pigeon and French Broad that year, but I’ve got to say her 2 biggest trips that season were a 2 day trip on the Nolichucky and a trip down the middle Ocoee. That Noli trip was Kassi’s first overnighter. And man I wish you guys could have seen the way Kassi walked through that crowd at the dam of the middle Ocoee. Sort of an intimidating place, she walked through that crowd and jumped in our boat like it was nothing – like a true seasoned pro. Those two rivers that year brings Kassi’s river count to 11. (In chronological order: the French Broad, the Rio Grande, the Pigeon, the Gauley, the New, the Youghiogheny, the Salt, the Arkansas, the Blue, the Taylor, the Nolichucky, and the Ocoee). I think kassi has in the ball park of 196 river miles under her collar. 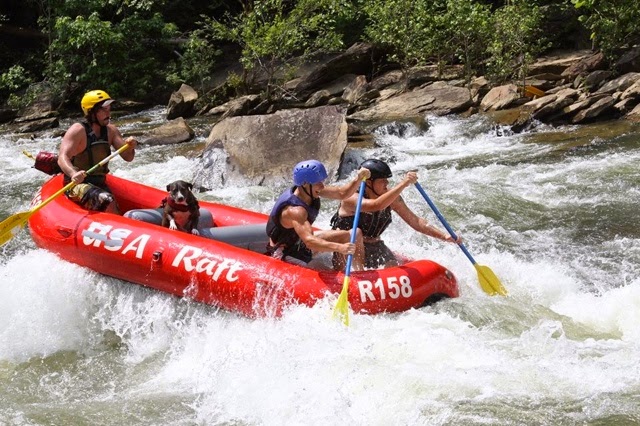 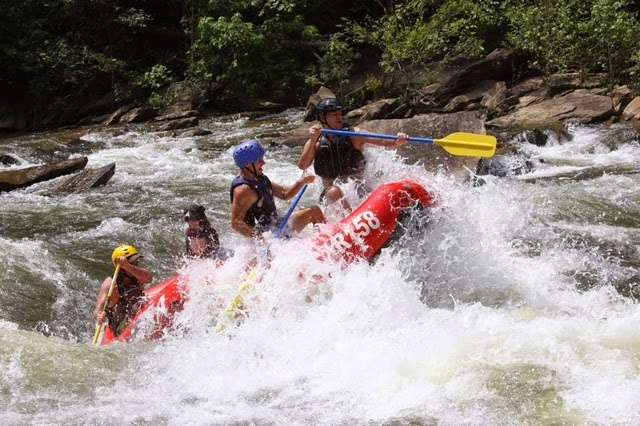 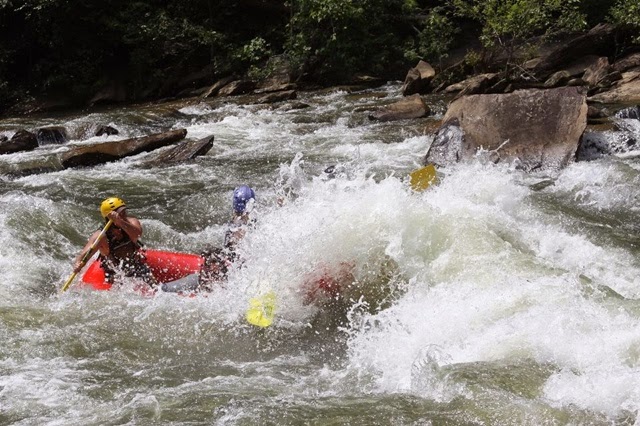 Last season (2014) Kassi rocked 4 trips on the Pigeon and 6 on the French Broad, one being Kassi’s first French Broad full moon midnight run and a FB 2 day overnighter. We wintered on the outskirts of Greenwood MS at the dinner band LLC’s Fat Meat Bidwell Studios, a music recording studio located on an old 15 acre dairy farm in the Mississippi delta. She has plenty of room to run around out here but she spends most of her time sleeping on the couch, curled up by the heaters! The season is here, and we will be off shortly on more adventures! 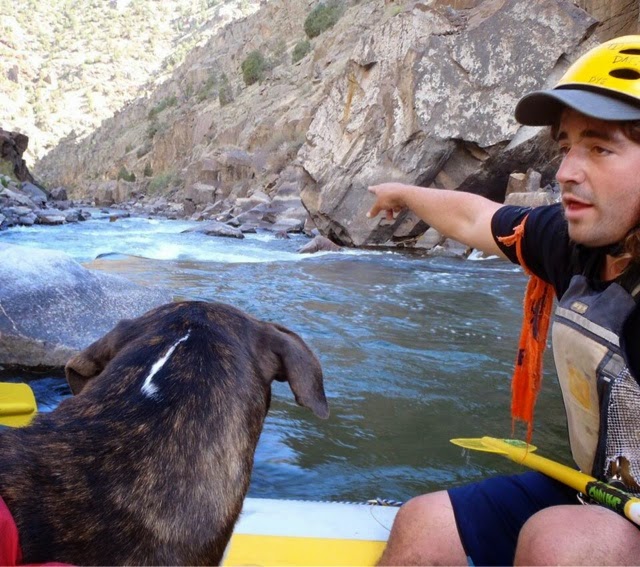 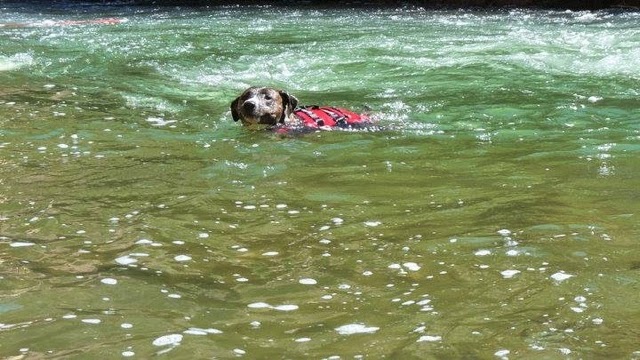 Our future river trips from here on out will probably be more on the mellow side. Kassi will be 8 soon and I don’t want to push her too hard – after all, she’s totally proven herself to be a badass – but who knows? We might get out there on some big water for a few more glory runs! Next Christmas we’ve talked about planning a trip: a 10 day overnighter canoe/ raft trip in Terlingua TX on the Rio Grande, Redford to Lajetas, all dog friendly state parks before Big Bend National Park. I’m talking a lot of layover days on that trip, with my girl Kassi rolling around on Tex-Mex sandy river beaches. 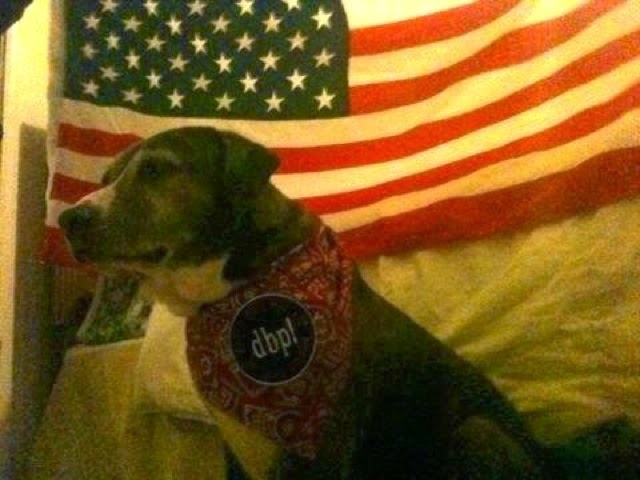 {EDITOR’S NOTE: catch up with Part 1 of Kassi’s Tail from 3/25/15. Cheers to a true Dirtbag Doggie!!
And yes, she won February’s Top Dog honors, and a Ruffwear K9 Float Coat to boot!! Perfect for that Rio Grande trip… Or that high water party!!}