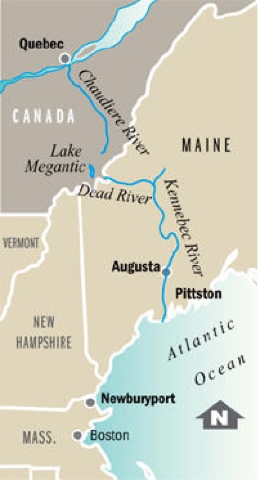 After Ticonderoga, and in spite of the recognition for cooperating with Ethan Allen and his Green Mountain Boys to take the fort, he was passed over for promotion and was not reimbursed for the expenses he incurred. His honor had been smudged by Congress and Allen himself for wanting sole credit. Abandoning the desire for success was not an option. The columns continued to move forward.
And it rained…
… and it rained.
The twelve mile traverse over the Great Carrying Place was a series of ponds separated by low lying land, with bogs and swamps in between. Five days of rain had turned the land into a quagmire of deep sticky mud, laced with downed and sunken trees. Under ideal conditions the distance could easily been covered in a day by the 1,000 troops. To give the task some perspective, it took four weeks to get all four divisions to the Dead River. The effort took its toll on the boats and supplies, not to mention the soldiers themselves. Game was available and trout plentiful, but without basic foodstuffs such as flour and rice, ruined in the rain and muck, food was beginning to be a great concern and half rations were soon in effect. If that were not enough, it became hard for many to keep the food in, as they were vomiting and suffered from diarrhea due to the only water available, which was brackish, steeped in tannins from the decaying forest.
The Dead had risen three feet during the portage due to the rains. Yet, no sooner had they reassembled and prepared to move upstream it started sleeting and snowing steadily. Then came driving and incessant rain again, possibly brought by an off-shore hurricane. As the rain receded the river rose more. On October 21, the river was in full flood over-night, having come up another eight feet, trapping them on a high point of land, now surrounded by raging water on all sides. They had planned on reaching Quebec City by this time, but had not covered half the distance. Provisions were nearly gone, and game and fish were not to be found because of the extreme rains. They were almost sunk and quite nearly lost.
The next day they moved on, sometimes pulling on reeds and limbs in order to inch forward. For more than two hours a number of troops and boats followed a swollen tributary, mistaking it for the main channel. Arnold traveled that day with a group of batteaux. On arriving at another set of rapids to be portaged, eight of the boats were capsized in the strong currents, scattering them and their contents downstream. Fortunately, there were no lives lost in the mishap, but their situation each day was becoming more critical. In a council that night he informed his subordinates that they had reached the point of no return and that their only salvation lay in front of them. Fifty hand picked men were selected to forge ahead to the Chaudiere River, to Sartigan and the French inhabitants to procure food and to set up a supply line to the struggling army.
Then came an unexpected variable from the back of the line. The fourth division had stayed at the Great Carrying Place for several days before advancing. Their commanders came forward to appeal to Nathanael Greene and his subordinates to turn back with them. Greene and his officers refused to abandon the mission and the men to the front without orders. The next morning a detachment was sent downstream to pick up promised food, only to be severely short changed. The men of the fourth division feared for their own survival. It didn’t help watching broken boats and spoiled provisions float past, nor the almost constant stream of invalids, sick and injured, that came from upstream.
On their return to Cambridge, Washington had their commander arrested and brought before a board of inquiry. The defection of one quarter of the total could spell disaster for all even before they made their destination and ultimately was probably the biggest factor in the failure after making Quebec City. Yet amazingly, he was acquitted with honors, as there was no one to testify to the direct affect to those that were left behind; they were still slogging and dripping through the Maine wilderness. Testimony of subordinate officers painted a picture of heroism that preserved the men that had turned back. 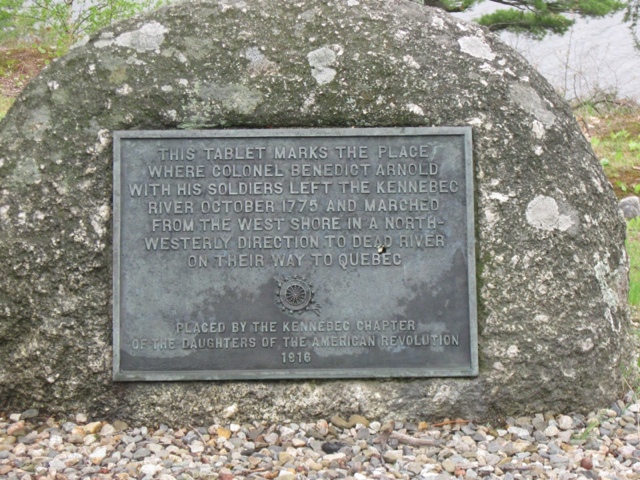 By the time Arnold had received the information he was already looking at the height of land to be overcome. It was getting colder and it began to snow again, covering the rocky pass with ice and snow. Those men in the advance took a beating as did their batteaux, slipping and falling on the icy route. The mad dash paid off though and soon food and supplies were beginning to arrive for the beleaguered troops.
It took three days for all the men and what boats would survive the height of land dividing them from Canadian waters. The first move after clearing the rocky slopes was a small but swift water known as Seven Mile Stream. The stream does encounter the Lake Magantic which is the headwaters of the Chaudiere River. If the over-land trail at the Great Carrying Place was to become a bog with rain, this portage must have been worse as it became known as the Terrible Carrying Place. Before entering the lake the waters again had to pass through an insufferable bog where water was braided and lost among the trees and mud. Men were starving daily, and transportation by boats was quickly unavailable to a majority. An overland route was established and word was sent back to the troops that were following to avoid the swamps, yet one division was led directly into the muck, costing precious time and energy.
Arnold pressed ahead with his soul mission: to save the men that had done more than just survive at this point. As they moved downstream along the Chaudiere, they did enjoy a quicker pace to the current. But on the other hand most of their battle with rivers had been moving against the current and not much with it. Not only was the river fast, it was also full of rocks in the current. Reaching the first set of rapids to be portaged, four of the boats were lost and smashed by the river, again, sending their cargo downstream.
Arnold then divided his force, going with the river party and sending the others by foot. Food and supplies were beginning to arrive, coming upstream from advance parties: numbers of cattle for slaughter, flour, rice, coffee and tobacco. Though the food was quickly devoured, it was a definite force behind the will to move forward. As food continued to move up the river, men continued onward, setting up depots for the men coming from behind. The commander still advanced in order to get clothing, blankets, shoes and other pressing needs for his men. He had no credit or funds provided from Congress. He took from his personal operating funds to help in any way that he could, then went back out to help his men where he could.
Benedict had started out with faulty information about the terrain and the distance to be traveled. The planning phase for this wilderness expedition was less than four weeks. They forged ahead into late fall and got far more than they ever imagined in the way of weather; hurricane force rain for days; sleet and wind driven snow and floods of epic proportions. Both the boats and the men who ran them were of dubious capabilities. The number of men that survived and the number of boats that did not is amazing. Fewer than ten percent of the boats made it. Starting out with 1,100 men and 200 batteaux, subtracting the 300 men that retreated with the fourth division and their boats, Arnold arrived in Ste. Marie with 650 men. Disease and malnutrition were likely the most common causes of death. Add to that the traumatic deaths and drowning, and it is pretty impressive that they had arrived with that number. But, it wasn’t enough to challenge the walls of Quebec and they would have to wait for reinforcements from Montreal where military success was a reality. The element of surprise was long gone, surviving into the winter became the challenge… and the waiting. Attempts to take the city only netted loses; even Arnold suffered a severe wound.
To have even arrived in sight of Quebec City by the route that they had taken was absolutely Hannibalian. Unknown to him, Arnold’s effort had won the attention of Congress, who awarded him a commission as a Brigadier General. His will to survive was not for military gain, political nor financial goals, but for the men who had endured. In his words these “brave men” risked all while they “were in want of everything but stout hearts.” He also expressed that the column was “inspired and fired with the love of liberty and their country,” and had survived “a march…not to be paralleled in history.”
Ultimately Quebec City was not taken, though Arnold was convinced that had they arrived ten days earlier, before the British were reinforced, the task would have been easy. The fact still remains that they had reckoned with the wilderness and it’s waters and come out the other side. If you’re on these rivers this summer or ever have or will be, try to think about what it would mean to go against the current…
…In so many ways.