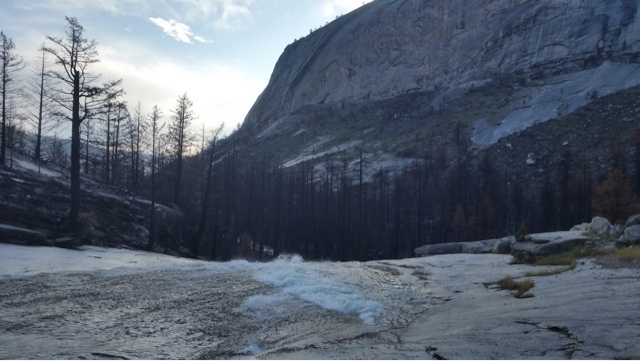 The Mission
We set off from Salem heading north, the opposite direction to Yosemite.  This was because Priscilla had a presentation to deliver in Cascade Locks which would complicate logistics further, but proved to be worth the effort.   I traded vehicles with my mother for the week to maximize gas mileage (IK’s don’t need roof racks!) and we set off south with plans to drive through the night to get to Tuolumne Meadows in time to secure a permit.   Things looked to be falling apart when we had to take an hour long detour near Bend, but persistence prevailed and we crossed the California border around 2:30 AM, arriving in Tuolumne Meadows around 9:30 AM.  We got in line at the permit office, excited to see we were first in line.  We were willing to take any permit we could get, but had a desired route in mind.  Come 11AM we walked up to the counter and secured our permit to hike from Glacier Point to Merced Lake.  We had a day to kill before we were allowed to begin our hike, so headed down to the valley for our first horizontal slumber since we had awoke at 5:30AM the day before.
The drive to Yosemite Valley and our campsite was over an hour and just as we were getting ready to unload our gear the first thunderstorm of the weekend hit.  We continued to unpack but as the water piled up and gumdrop sized hail began in ernest we yielded to the weather and retreated back into the car where the large amount of gear prevented the seats from reclining.  We spent the next hour waiting it out, we were then able to get camp set up and finally rested our eyes at 3PM.
Evening in Yosemite Valley 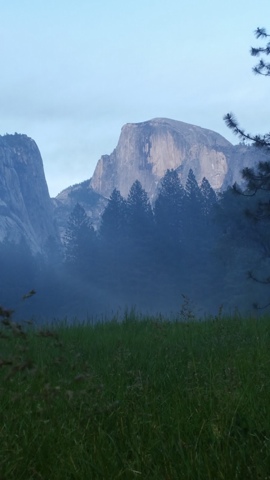 The next morning saw us up at Glacier Point around 8AM, we intended to camp at the end of the whitewater section today and with 7 miles of trail in front of us 9AM seemed like a reasonable time to begin the hike.
Near Glacier point, looking up the Merced headwaters 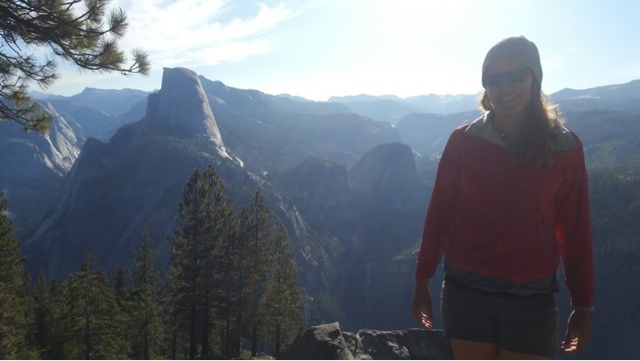 Two hours of packing saw us hitting the trail after 10AM.  The hike in really isn’t too bad, but that much weight on your back for that long is going to hurt.
Stuff for our back 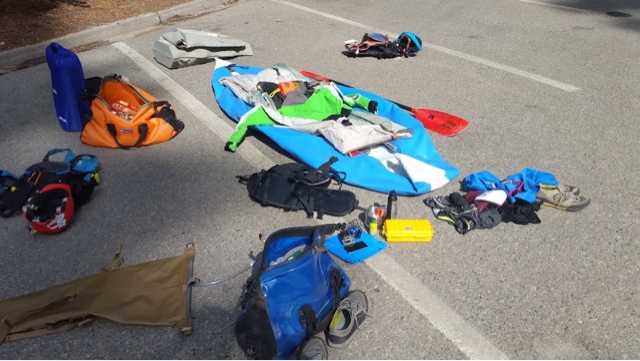 Stuff on our back 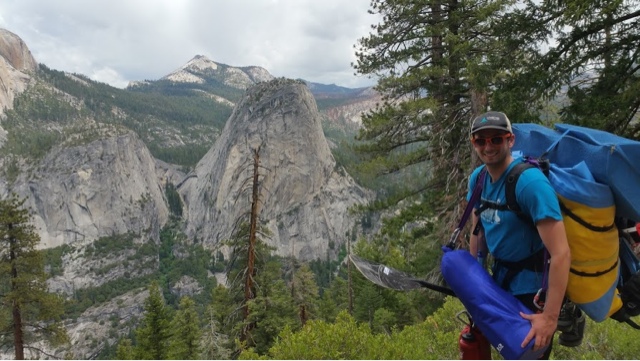 The thunder returned in the afternoon and this time we found it enjoyable.  We made camp around 5PM near Moraine Dome at the upstream end of Little Yosemite Valley at the base of a large cascade.
We got camp set up just as it started raining, the rain ended an hour later and was the last precipitation of significance for the trip. 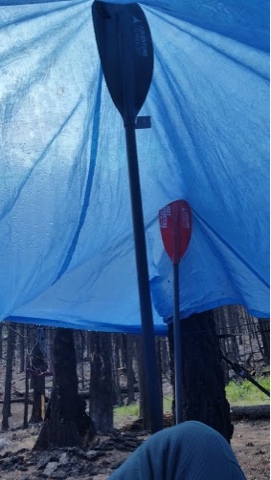 The next morning saw us hiking between 8-9AM, covering the 6 miles to Merced Lake by 2PM.   We had left our camp set up near Moraine Dome and were hiking “light” with just our boating gear. By the time we reached Merced Lake we were tired but happy to be paddling.  The run starts off in top form with a fun, straight forward slide.
It was so fun that even sore from all the hiking we had to walk up the granite sidewalk to do it again. 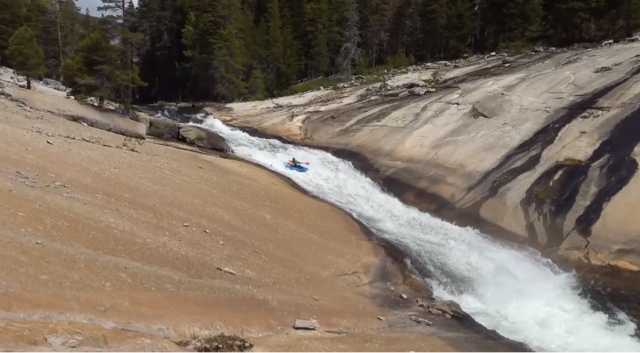 The gorge the slide started off lasts about a half mile and is as fun as it gets.  There were back to back 5-10 foot slides the whole way finishing with a 50 foot tall slip and slide.  Unfortunately, one of the limitations of the IK’s was brought to focus when Priscilla hit a hole in a small rapid, filling up the boat with water just above an eddy we intended to catch.  The couple of seconds of having a heavy boat before it drained were enough to cause her to miss what otherwise would have been a simple eddy.  She turned to face the next double drop while I yelled the line to her from shore.  I jumped back in my boat when she did not pop out from the second drop in the series right away, as I did I saw her boat rocket unmanned into the air.  I still couldn’t see her as I resurfaced from the first drop, as I crested the second drop I saw her rise from the depths and into the pool below.  We both got out on the left side with her recovered gear and took some time as she was understandably shaken up.
Good stuff in the first gorge 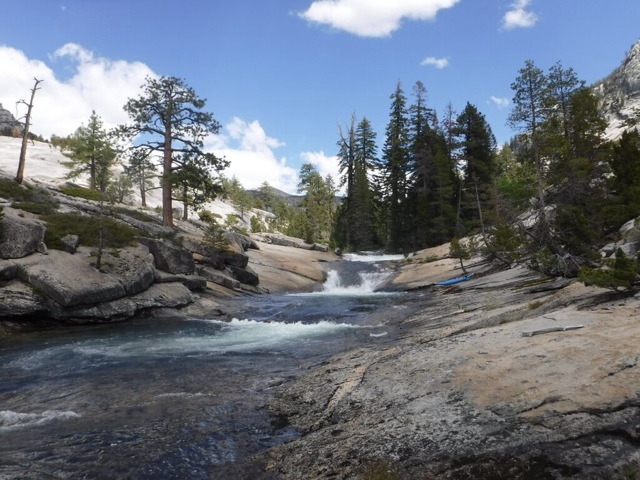 We talked it out and assessed that the combination of being tired and having IK’s would likely mean we wouldn’t be running some of the class V sections we had seen on the way up.
The next rapid was another double ledge/slide and she chose to hop back on the horse.  We finished up the gorge shortly arriving at the exit drop (the 50’+ slide)  We saw a sweet line on the left that could be done if we skipped the lead in, so only ran about 30-40 vertical feet of the slide, but it was a blast.  As we were finding out, this run is full of the largest class III-IV rapids either of us had ever run.  Below this large one was an island we ran on the left and then a short meadow.
Assessing the exit slide to the first gorge. 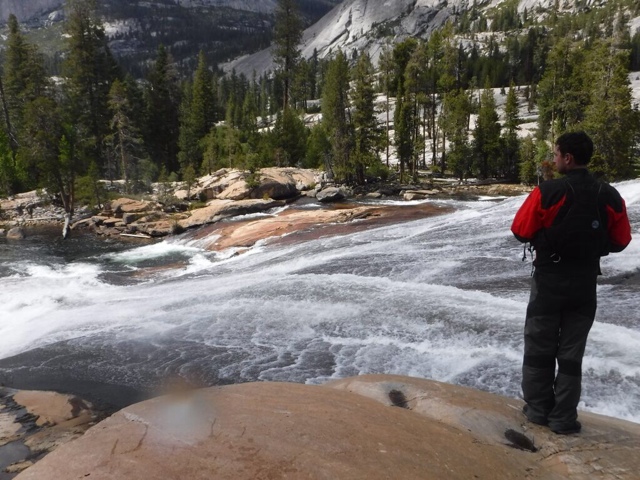 At the end of the meadow is a foot bridge marking the entrance to the largest gorge on the run.  We ran/portaged the series of rapids leading up to the point where the walls became vertical and large on just before a right turn and found our predetermined take out on the left.  This gorge is full of good rapids, but the entrance and exit didn’t really go in IK’s and portaging the exit would require setting up rope before dropping into the gorge so we decided to let it rest, confident Pat and Steve had likely already unlocked that particular piece of whitewater.  We deflated the boats and walked around the trail on the left.  Half hour or so later we arrived at the end of the gorge and stashed our gear (minus the IK’s foam floors we were using for sleeping pads).  Planning to finish the run the next day, we walked back to our camp.  We ate ravenously that night and the joy that comes with adventure in the wilderness started setting in.
Good stuff before getting locked into the main gorge. 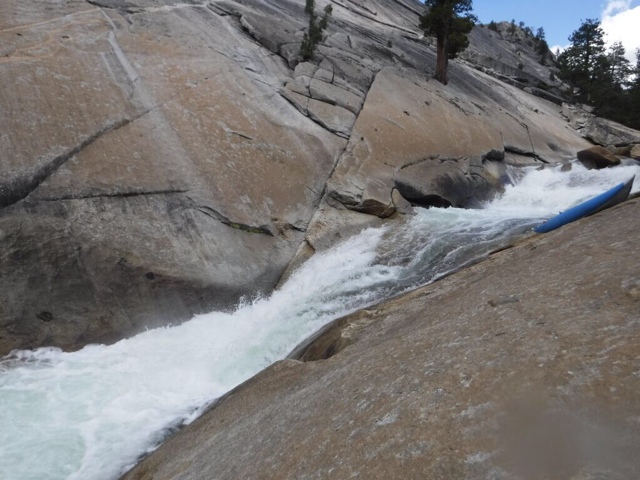 A taste of the goods. 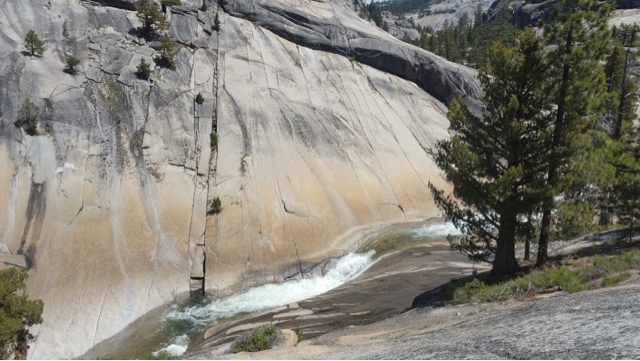 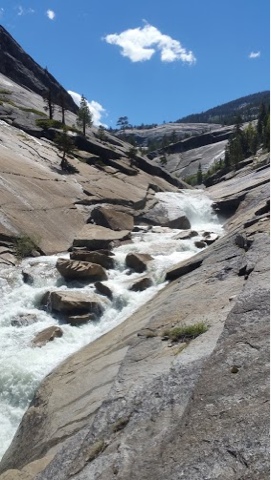 Exit to the exit rapid. 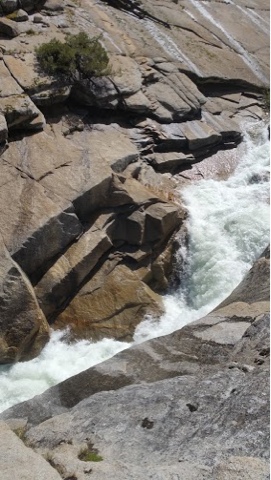 The next morning we were back to our gear and paddling downstream before noon, likely a couple hours earlier but I wasn’t paying attention.  The day started with a few steep bouldery rapids with good boofs and a quick portage or two.  This section ended in yet another long slide, this one was lower angle but had a neat pillow move off a boulder in the middle. 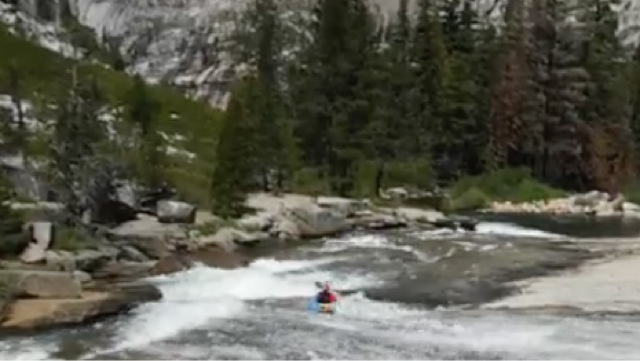 Another island followed, then we were back into steep bouldery rapids, one of which created a clean drop between 10-15′.  We portaged the gorge above Bunnell Cascade, the entry drop had three boofs in quick succession and would have required not getting any water in the IK in order to execute said boots.  I thought it went for sure in a hardshell and likely went in an IK, but decided against running it.  We both ran Bunnell Cascade, which I thought was one of the funnest drops I have ever run.  Its tall and fast and low difficulty!  The exploding mess at the top had me a bit worried, but after further study I was confident there was a line on the left and indeed there was.
Bunnell, so fun!! 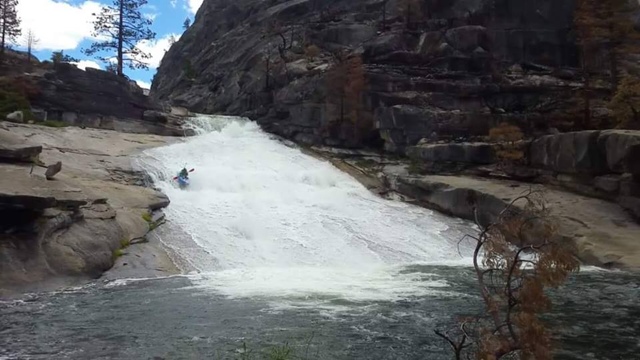 Below here was an island and a meadow with an easy log portage or two before a couple of class IV rapids leading up to the final large cascade just above our camp.  The lead in rapids were fun and the cascade was divine; tall, fast and all it required was lining up and keeping it straight, resulting in a skip across the pool at the bottom.
Walking up for round 2. 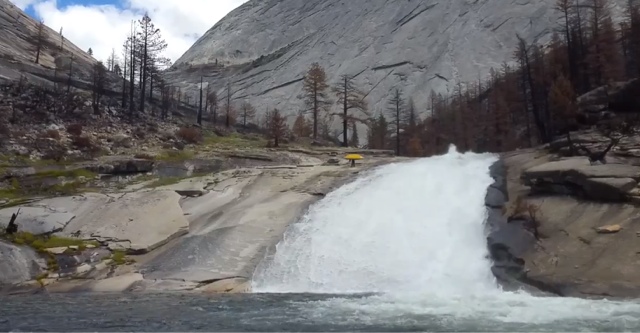 We then took a nap and a swim before deciding we may as well paddle/hike out that afternoon.  One more island below camp and then a few miles of pleasant meadow floating through Little Yosemite Valley. 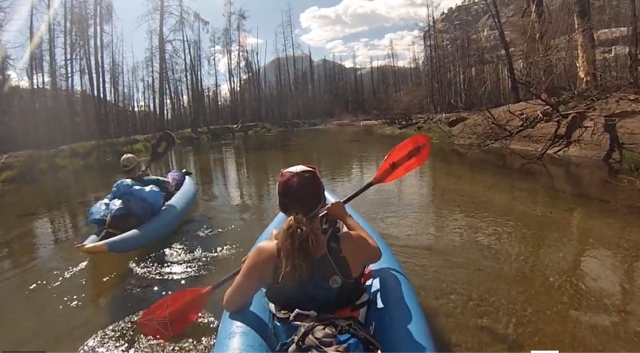 This section had a few easy log portages.  We took out just before the whitewater picked up again, below this point the stream enters a gorge which concludes with Nevada Fall and is not legal to paddle.  We were going to take the Mist Trail, but weren’t sure where it branched off from the trail we were on (John Muir).  We made it to the lip of Nevada Fall before realizing it had branched off back near the bathrooms.  We were glad to have made the mistake as the view from the lip of Nevada Fall is incredible.  We backtracked and began the knee/back busting descent down the Mist trail.  The Mist trail is breathtaking and should be done by anyone capable, but not with a kayak on your back.  If you are carrying a boat, use the John Muir trail.  This trail is a little longer but not as steep.  For us, the Mist trail turned out to be the most difficult part of the whole trip and our bodies were pretty beat, the trail flattens a bit before Vernal Fall which helped ease the strain.  As the trail descends from the lip of Vernal it gets rough again and we were really feeling the pain.  The next hour or two was challenging for us, but we made it out to the bus stop shortly after dark and it only took us a little stumbling around in the dark to locate our camp and flop down for the night sans dinner.
The next morning we ate a harty breakfast of all our left over camping food and I took the last seat on a $25 dollar bus shuttle to return to our car on Glacier Point.  I expected a dull ride, but it went quick as the driver told stories of the area and how things got their names, it was nice being a tourist after many days of effort.  Upon arriving back at Glacier Point the adventure had one more trick up its sleeve in the form of a dead battery.  After figuring out the tricks of jump-starting a Hybrid I returned to Priscilla and the Valley where we loaded up and began the 10 or so hour drive to Grants Pass.
The trip was long and full of trials, one of my favorites yet.
-jacob
——————————————————————————————— 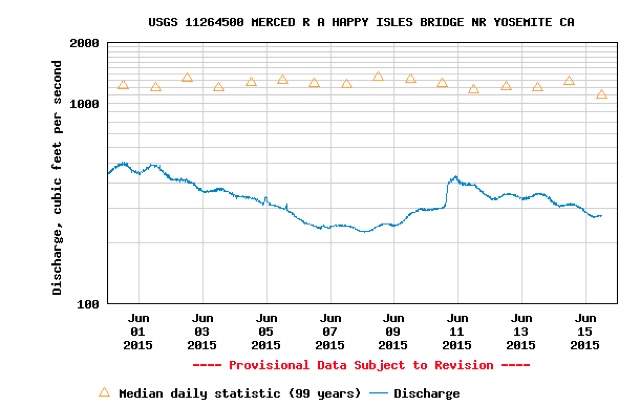 We were paddling on June 7th & 8th.  We thought this was a perfect flow for a hardshell kayak, but a touch high for IK’s to run the main gorge.
{EDITOR’S NOTE: This is Part Two of the series. To read about the preparation that went into this descent, check out Part One from 6/19/2015.}
Footy by Priscilla Macy, DBP Admin and serious Queen!
https://vimeo.com/130754869
A link back to Jacob and friends’ blog:
http://mthoodh2o.blogspot.com