Top Drop of  Shipherd Falls on the Lower Wind River, Washington (Photo By Clinton Begley)
I’ve spent enough time near the water to witness the accumulation of hundreds of beer cans and bottles forgotten in the twilight near favorite fishing spots or swimming holes. I can’t recall how many Nalgene bottles I’ve recovered from slackwater between drops, undoubtedly washed out of rafts after laying unclipped at the feet of an all-to-exhilarated custy. I’ve found several tackle boxes worth of lures, lead weights and bobbers over the years, to say nothing of the miles of tangled wads of monofilament I’ve found dangling from limbs and branches over riverbanks. And I’m confident the quantity of Snickers wrappers, Mountain Dew bottles and Corona-logo flip-flops I’ve found corking their way down the run-out of rapids or in the sudsy eddies on either side contain more than enough petroleum to build my next new kayak (I’ve got a box with your name on it Shane Benedict). And yet I rarely see anyone intentionally throw these items into our rivers. On the contrary, I see a lot of people trying. I see coolers overloaded with garbage, the lid propped open by empty handles of margarita mix, being carried to also-overflowing steel trashcans near the takeout, or hefted by teams of two into the backs of pickups. And I see kayakers sifting through the zipper pockets of their PFD’s throwing out flattened PBR cans and water-logged chapstick. But occasionally we, myself included, fail. We leave behind, we drop, or we forget to clip-in gear before getting chundered and swimming. But we try, and we fail. We’ve all done it, regret it, and try to fail better next time. And it is forgivable. So in the absence of evidence to the contrary, I readily assume that the size-12 Corona aficionado genuinely regrets the loss of his beloved flip-flop to the murky deep, and that the hyped-up adventurer “Doing The Dew” is hanging his head for reasons other than caffeine withdrawal.
But Jah help you if I find notes to whoever plucks your garbage from our rivers.
Our crew had just finished running a few laps on the first drop of Shipherd Falls on the Lower Wind River in Southern Washington (below) and were thoroughly enjoying the clear blue water in this steep section consisting of four vastly different drops over just a few hundred yards of river. We crossed paths with migrating Spring Chinook as they leapt up the falls we crashed down. 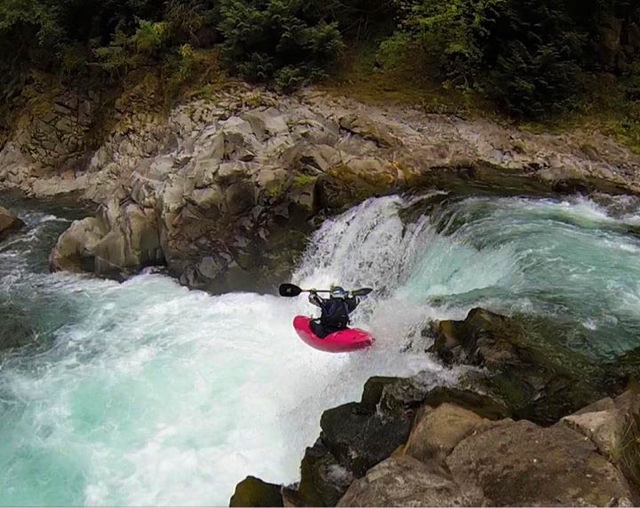 Clinton Begley on the top drop of Shipherds Falls | Lower Wind River, WA [Photo by Brooks McKee]
The crew decided to set safety on the next drop. It’s a down-the-middle 18 footer with a rolling lip that requires a tricky late-boof, and the run-out feeds directly into the next, appropriately named manky slide “Cheese-Grater.” As I scrambled down to scout the drop, I noticed a shiny bauble doing laps in the river left eddy and immediately recognized it as a large glass tequila bottle. Cussing aloud, I hopped down quickly to try and snag it on its next pass. With our paddling compadre Brooks holding securely onto my PFD, I was able to lean out and snag it on it’s 4th lap around the strong eddy that recirculated back into the falls. As soon as I pulled it from the frothy eddy I said
“You’ve got to be kidding me. There is a damned message in this bottle.” 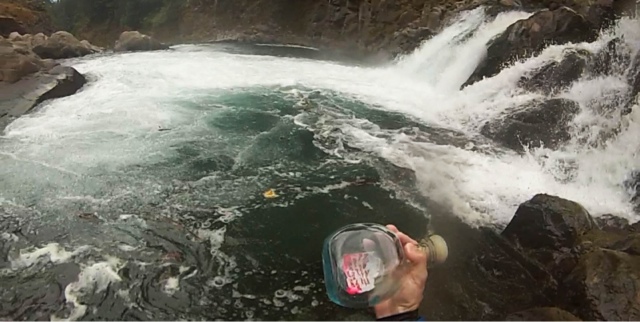 Patro-no-they-didn’t
Through the thick glass, written on the inside of a Camel Cigarettes pack in what appeared to be red Sharpie, I could read: “Hello peoples of the Northwest if you find this call 541-XXX-XXXX to get next.”
I looked at Brooks and said, “Oh they done F#$%ed up now.”
Forgetfulness and carelessness can be forgiven. But thoughtless disregard for the safety of others, no matter how “fun” something might seem, is inexcusable. I grew up in the Midwest, I’ve done plenty of questionable things for fun at the expense of safety for myself and others, but glass in the river is a particular pet-peeve of mine. A well-known riverman and SUP’er once deleted several of my comments on Instagram for suggesting that maybe surfing on a SUP while drinking from a glass growler might be a poor decision when considering the potential impacts to someone’s feet if he dropped it. Not to mention the relative abundance of non-glass growler options out there.
Once clear glass is in the water, it’s completely invisible and can easily shred a bare wading-foot and can even puncture a thick-soled neoprene booty. At least we can see rapids coming most of the time. Glass is just unfair, and nobody wants to add a deep laceration to the list of indignities while flopping toward shore after a good Wallacing.
So I tucked the bottle into the back of my Stomper and continued the rest of the beautiful run without incident. 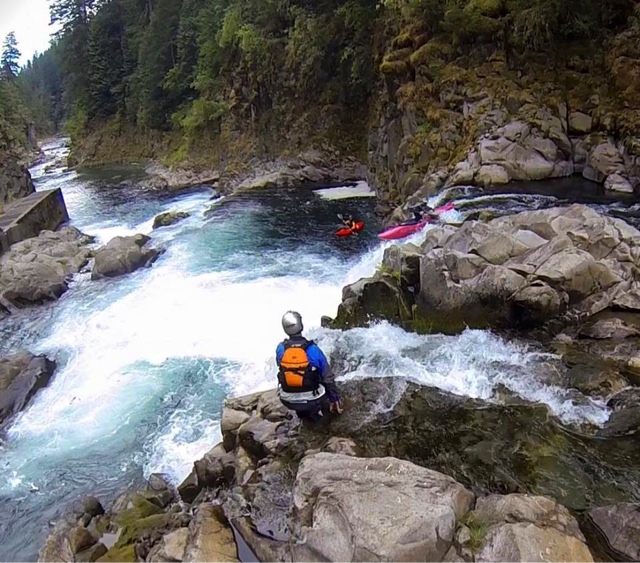 Clinton Begley and crew on the second drop of Shipherds Falls | Lower Wind River, WA [Photo by Brooks McKee]
The next morning, after sleeping on the issue of how best to proceed, I decided that a soft “teachable moment” was best. I decided to just open with how I found the bottle, and then engage in a thoughtful discussion of why intentionally throwing glass into the river is a bad idea for everyone. I decided to set my ego aside and instead try to make the exchange positive, fun and informational.
Now is the part where I should probably mention that I’m a huge fan of Sting and The Police. When I was 3 or 4, Sting’s 1985 solo single “Fortress Around Your Heart” was my favorite song. For my Father’s birthday, I took him to see The Police in St. Louis during their 2007 reunion tour. I have the entire “Message in a Box” boxed set and Synchronicity Part II was always my favorite song to play as a bassist in a cover band in Illinois. Bare this in mind, and the lyrics to the 1979 associated hit by the band as you read the following transcript that I will leave for you without additional comment:
(*For those who aren’t as ardent fans as myself, bold phrases are references to song titles or lyrics from The Police)
It didn’t really go as planned, but once the conversation got nasty I had no choice but to engage in the best way I knew how. Puns.
I feel like my point was made. Now only hope can keep me together that this wayward soul learned something positive and isn’t a Canary In a Coalmine for what we can expect on other rivers throughout the northwest. Even if they learned nothing, one could consider this post my SOS to the world to please don’t let me lose my faith in you; please keep glass out of our creeks and rivers. Besides, littering is a crime. Just ask The Police. 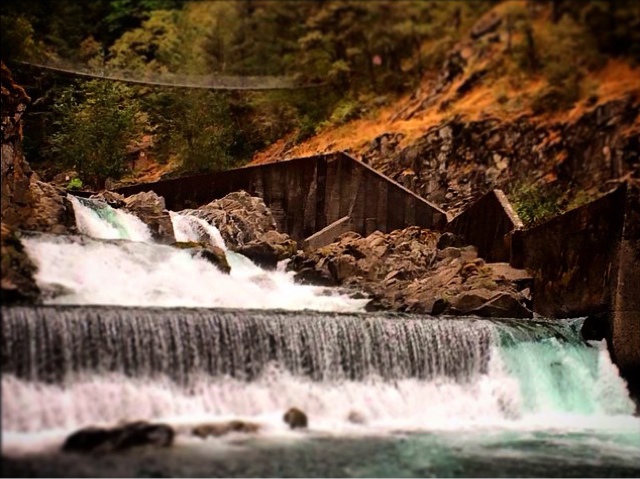 Looking up at the bottom three drops on  Shipherd’s Falls on the Lower Wind [Photo By John Harmon]
EDITOR’S NOTE: Thought you might enjoy a look at the conversation between the bottle sender and Mr Begley… WALLACE!! 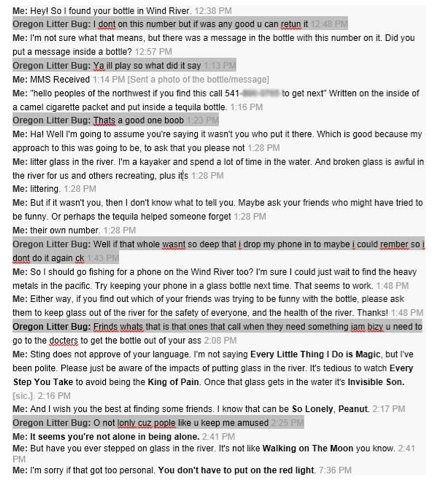