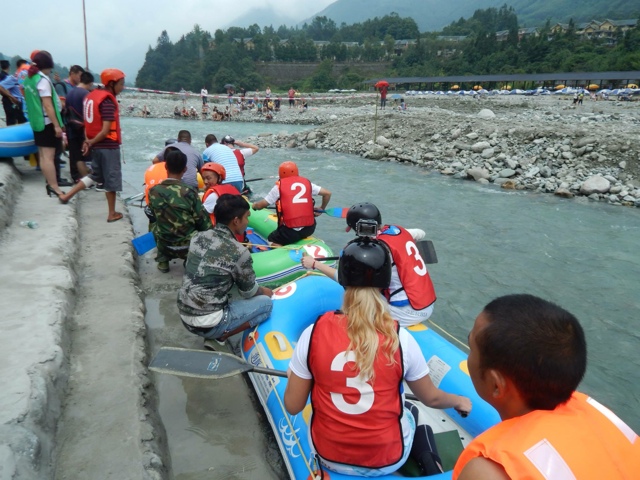 This year a few lucky teams from around the world were invited to travel to China to race in two R2 competitions. The competitions were held on the same rivers as last year, but this time they were separated into two events instead of just one. 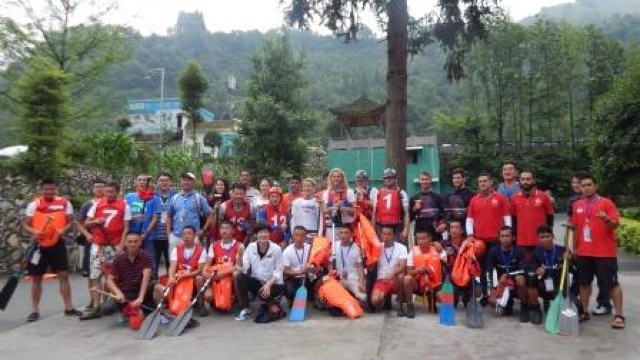 Teams – Stop 2
I was fortunate to be invited to Stop 2 (second competition) and so this report is about that, but I did get feedback from some of those that attended Stop 1 (further down). 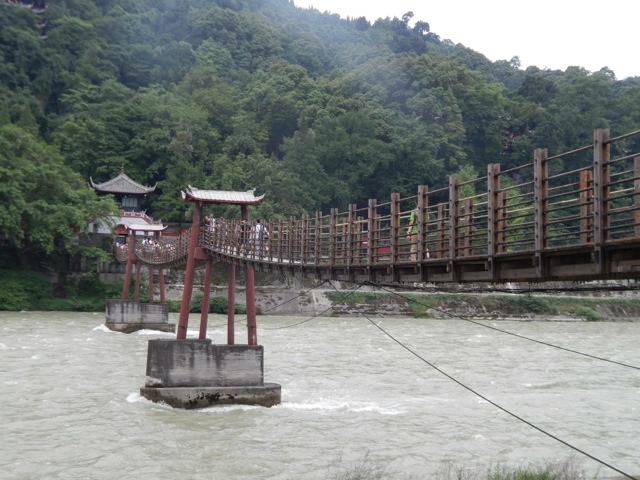 Stop 2 – the 7th International Natural Water Rafting Competition was held in the Dujiangyan (Hongkou), SiChuan region. The economy and tourism are developing rapidly here. It is a “small” city of five million inhabitants compared to nearby Chengdu which is 15 million. It is situated amongst beautiful mountains and is surrounded by divine forests and several UNESCO protected areas. We were lucky enough to visit all these places and more. 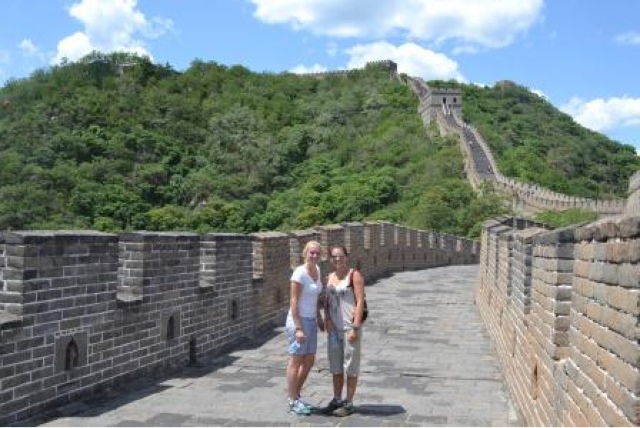 We all had at least one day of adaptation before the day reserved for training. The river is Class 1-2 and we paddled in a small unusual R2 raft, not in-line, but shaped like a tiny real raft. Canada, Switzerland, Serbia, Turkey and Indonesia were the participating guest countries. The competitors from Indonesia and Canada are also members of their Open Men’s division and will represent their countries at the WRC R6 in Indonesia later in 2015 and so were justified as favourites. 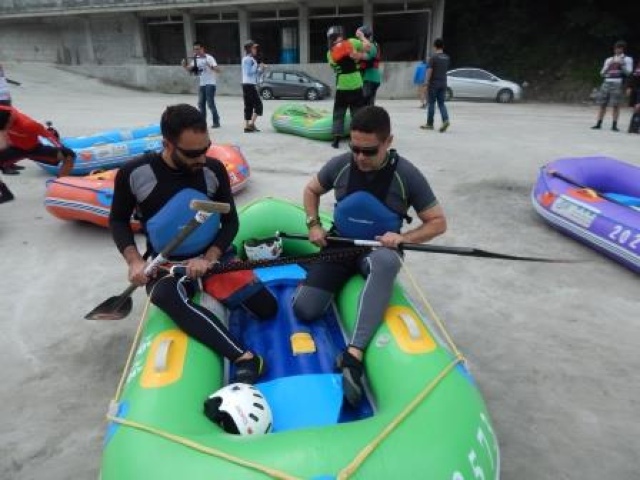 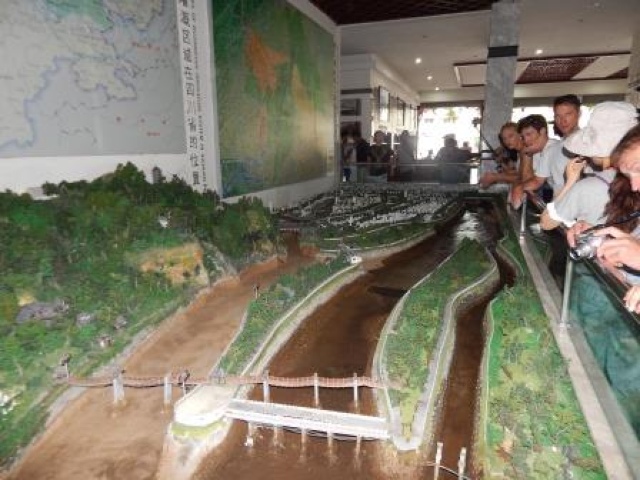 After a successful training day we went to Dujiangyan on a tour of one of the UNESCO world heritage sites – Dujiangyan irrigation system an incredible man-made construction in harmony with nature. After a short walk we returned to the hotel and rested for tomorrow’s opening ceremony, race and the closing ceremony. No matter that this event is not listed as an official IRF rule based event the athletes all still approach the race seriously. 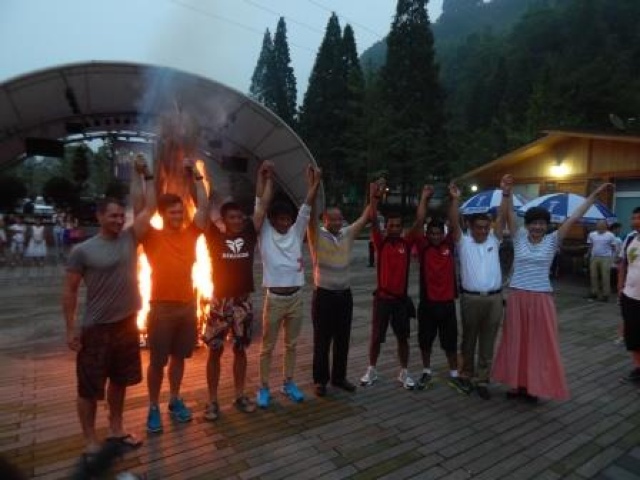 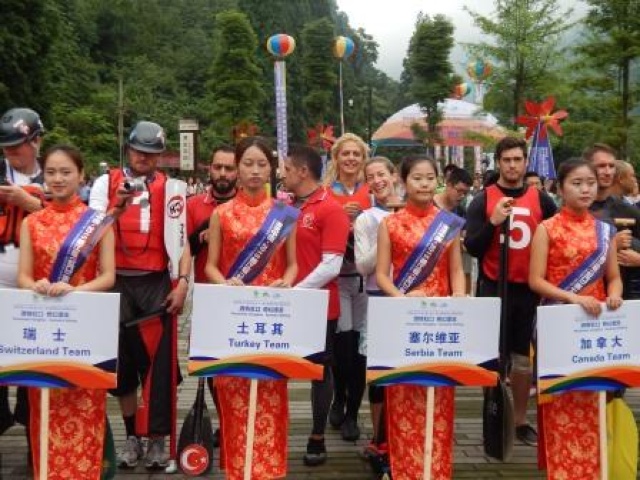 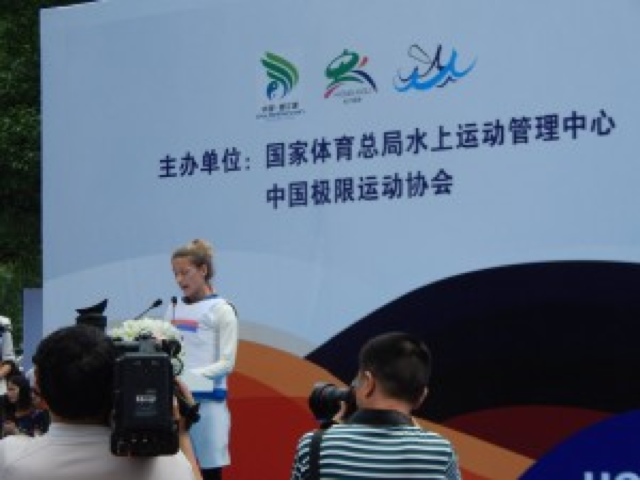 The opening ceremony was beautiful and the oath of fair play and fair trial was given by one male and one female athlete, and confirmation by officials followed by piles of confetti. 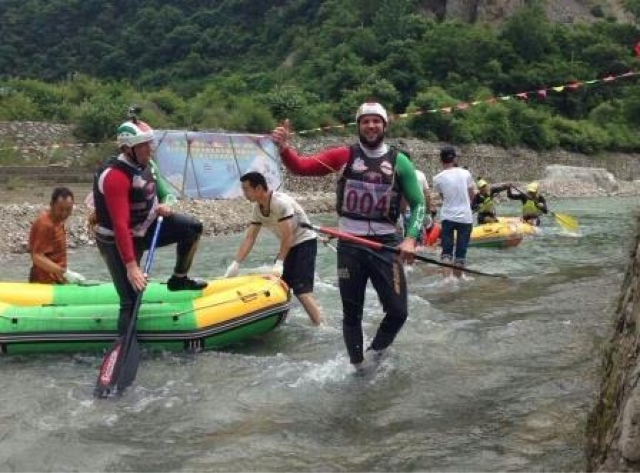 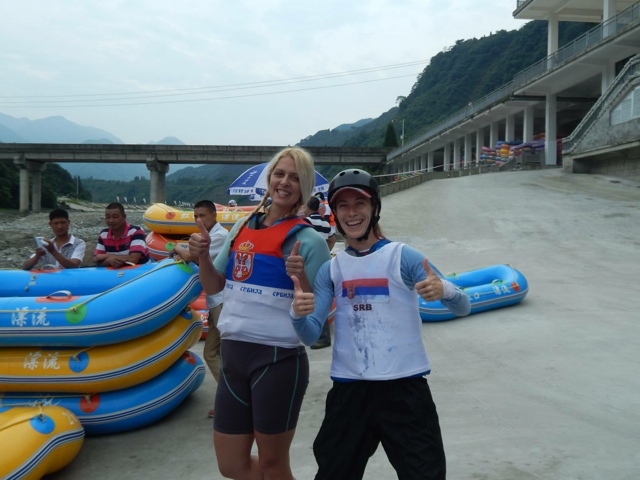 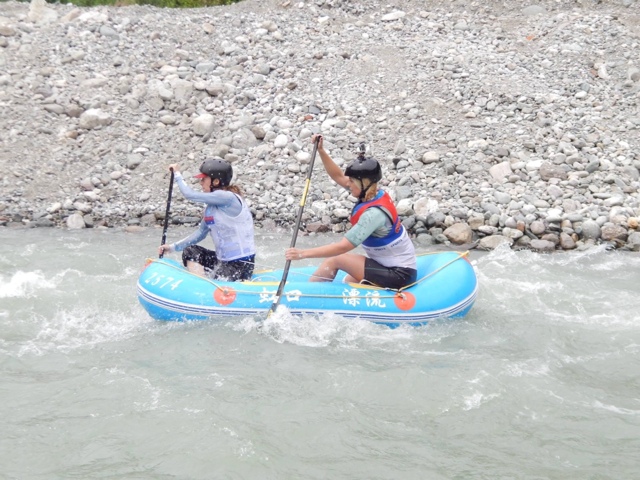 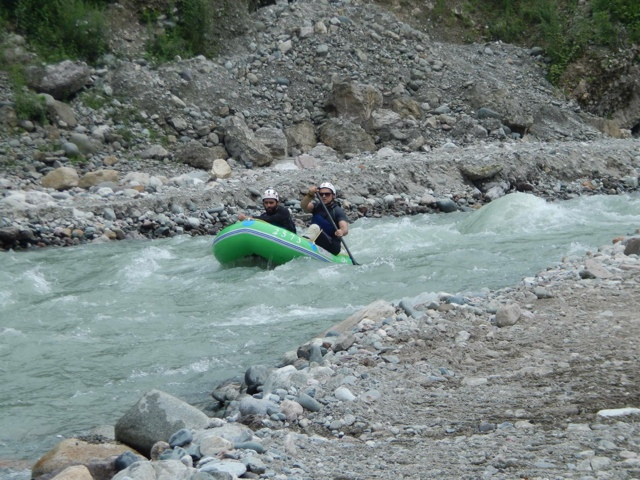 After that we were taken to the start. The race lasted an average of half an hour. The competition was held on a natural river which has been slightly modified for the tourists. (Video coming shortly) During the night the water level dropped so avoiding the shallows made the ride more interesting. As expected, the favourites climbed the podium: 1. Indonesia, 2. China, 3. Canada. Congratulations to the winners! 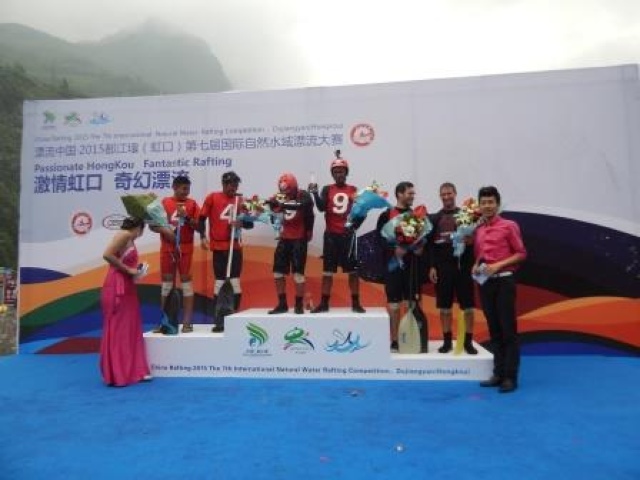 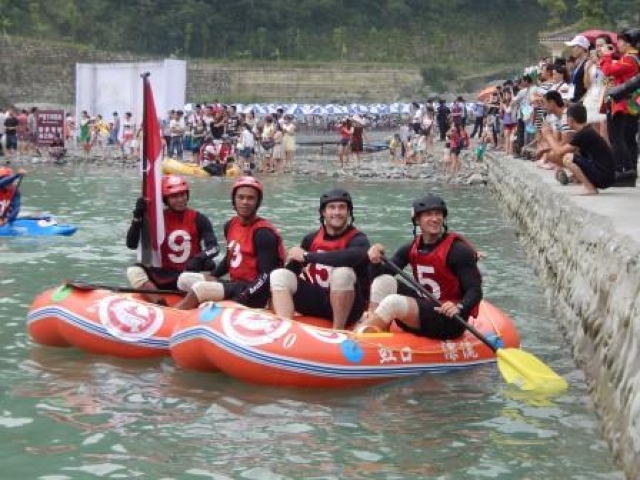 After a rest it was the closing ceremony that night. Lighting of a fire as well as local customs of the centre were honoured with the Olympic Gold medallist in C2, Meng Guanliang, and the winning teams of the R2 competition. After the national dance of the Cultural Society, DJ Kanat was on the scene with his mix of music which pulled from us our last atoms of strength. A beautiful closing ceremony. See the video of the Off river activities. 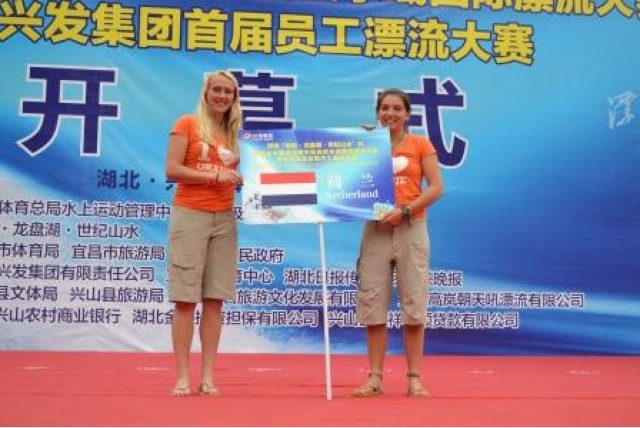 The last day was reserved for rest and tours of the new UNESCO-protected monuments. And we took maximum advantage of it! 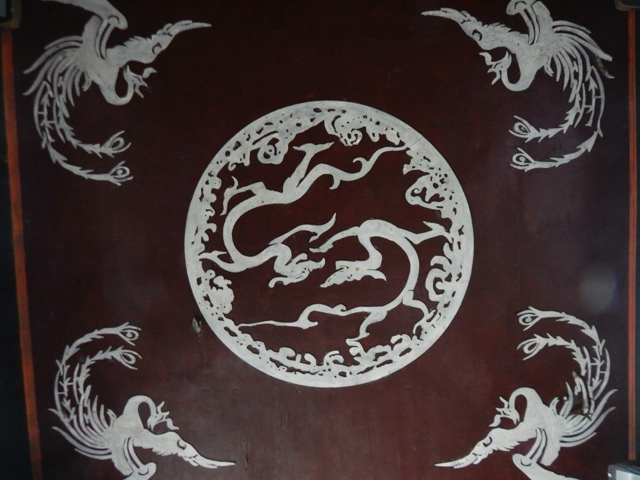 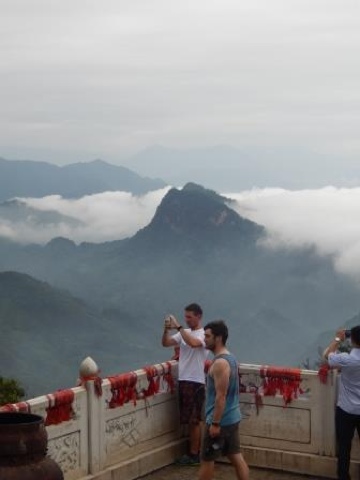 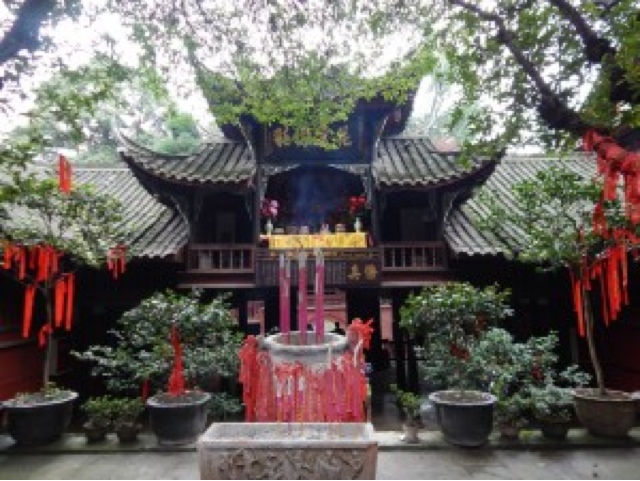 Another fantastic year for competitors in China!
Responses from Teams attending Stop 1 – Yichang – 11 to 14 June 2015
Raft Team Denmark Ladies, Lillian and Ida:“We had a great trip to China, which we will not forget. The Chinese are to be commended for giving us international teams a really good experience and their ability to organize an event like this. Each foreign team had their own interpreter to help during our stay and there were no limits to their helpfulness. They were constantly taking care of us, we were served delicious food all along the way and many friendships were developed around the traditional Chinese round tables.
The rafting was indescribable – more channel than an actual river. With a drop of 148 meters on the course, and no foot holds in the bottom of the boat, it made the rapids crazy and wild in a way that can not be described but must be experienced. Challenging and just amazing fun, once you accept the circumstances.
We would like to thank everyone who helped make this trip special – our Chinese hosts and all the other teams that we made friends with. Hope to see you in Indonesia for the World Rafting Champs.”
Hungarian team, Laci & Szabolcs: “Dear friends! Thank you for the invitation to race! One of the more special experience of our lives has been now lived in China, everyone was very helpful! The organization and conducting of the competition was professional and smooth – always everyone knew their place and what to do!
The track was fast and technical and a great experience to paddle. The opening ceremony was also excellent and the closing ceremony the best production we’ve seen! It was a great experience for us to meet new people and a new culture and to taste traditional Chinese food. We hope to see you soon as possible! “
Dutch women’s team, Anne & Suzanne: “It was a great rafting adventure. We met amazing people who made us feel at home in China.They organized the entire competition in detail. Thanks to everyone who made this possible!”
Responses from teams attending Stop 2 – Dujiangyan – 25 to 30 June 2015
Canadian team, Jon & Tim: “The race in China was a lot of fun. A great river to raft down, great competitors, and the hospitality was amazing. They treated us so well with awesome food, and accommodations. The area is beautiful as well, mountains and rivers, what else could a paddler ask for.”
Indonesian team, Ridwan and Caun: “The R2 rafting competition in China this time was very impressive and become a new history in the world of rafting for Indonesia because for the first time the Indonesian Rafting Team became the champions in an international white water rafting competition. We expect this to be the start of the rise of this team’s achievements in rafting for Indonesia.
Thanks to the committee for inviting us to participate and we hope to be invited back to the competition in the following years.
Comfortable hotel, delicious food, challenging rivers and very friendly teams  from other countries (China, Canada, Switzerland, Turkey and Serbia) will be the sweetest memories. May we all be reunited.”
Serbian women’s team, Milica and Nada: “Once again a fantastic competition in China! Our impressions of this competition and people are again at the highest level. This SiChuan area, Dujiangyan and Chengdu cities, we recommend as much as Paris or Vienna, and more. Plenty of UNESCO protected monuments, temples and parks is certainly something that should be put on the travel list.
Thanks to the sponsors of the competition. Thanks to all the new friends from China – Jia, Li, Lai and Lukas and the incredible hospitality.
We sincerely hope that we will be privileged to see China and all our friends there a third time, to go rafting on her rivers, visiting its monuments, and so we hope to return to that beautiful country.
Thank you China again for everything!”
Thanks to Mr. Li Quanhai – head of the “China Water Sport Administration Centre”, Mr. Tan Xuejun – director of “Chengdu Municipal Sport Bureau”, Mr. Zhang Yusong – Deputy of “Dujiangyan Municipal People’s Government”, Mayor of Dujinagyan Municipal Government, co-organizer – “Chengdu Feilaifeng Tourism Development Company Ltd” and “Chinese Extreme Sports Association” we were blessed with excellent organization for the competition, the possibility of participating in it and immense hospitality.
Some Links:
International Rafting Federation
www.internationalrafting.com
IRFs album
https://m.facebook.com/media/set/?set=a.10153045972631325.1073741872.153710746324&type=3
Serbian teams album
https://m.facebook.com/media/set/?set=a.1638503756362054.1073741832.1492840614261703&type=3
Turkish teams album
https://m.facebook.com/kanat.karamursel?v=photos&album=a.10153121293609139.1073741826.716964138&_rdr
IRF off river video
https://m.youtube.com/watch?v=168DUP_s1ak&feature=youtu.be
{EDITOR’S NOTE: Nada specifically asked us to challenge more dirtbags from around the globe to participate in this unique race. “All costs are paid so they just need to pack up and go.” She specifically named Dan McCain (“my favorite”), Aaron Erdrich, Greg Babikoff, and Jason Flannery, all DBP Admins… SOUNDS LIKE A DIRTBAG GOOD TIME!}