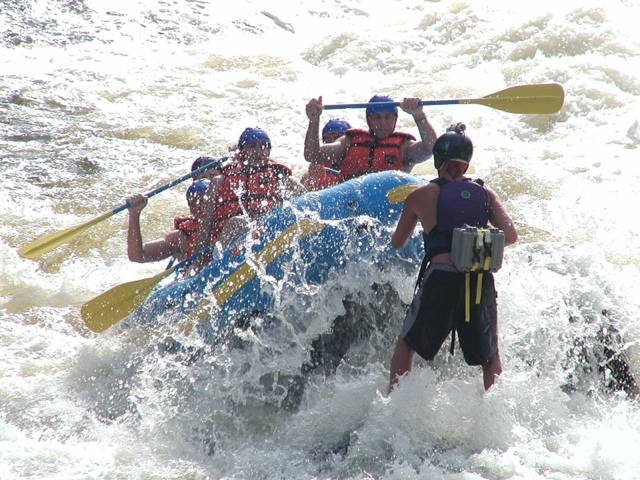 I opened the Dirt Bag Paddlers mailbox to find this message accompanying a video link from our homie Jr Duggins: “This is a video of the video at the bar after our rafting trip of Me and some friends getting eaten by the rapid Surprise on the Lower New River in West Virginia. #dbp!” This got me thinking back to the old days of rafting footy, and as I slipped back in time memories flooded my mind about the way it was before GoPro and Vimeo changed everything… 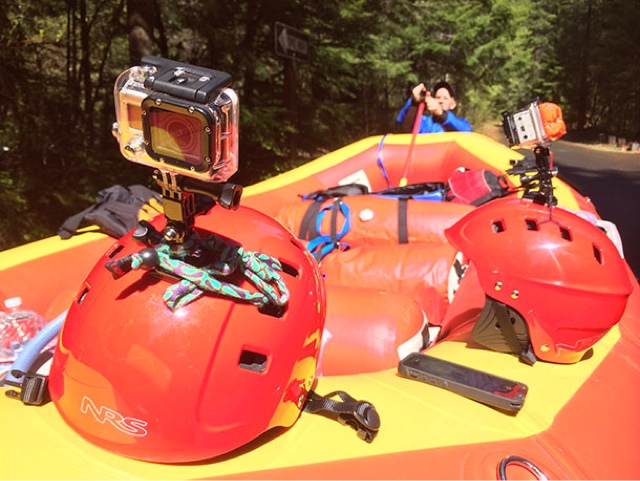 Back in the day video escapades were so much sweeter. At the takeout, everyone would gather around to watch the magic unfold again. The hoots and hollers were communal and infectious, the oohs and ahhs and the laughter rippling through the group, taking us right back to the moment. The custys would buy their VCR tape and bring it home to share with their land lubber friends and family, but in the confines of home the reaction was never quite the same. Only in the company of other people who had shared the experience, still wet from the Wallacing, did the grainy footage take on any meaning. Outside of this privileged core the whole idea of rafting looked rather, well, dangerous and ridiculous. What was FUNNY about dumping the whole raft at Dimple Rock?!? 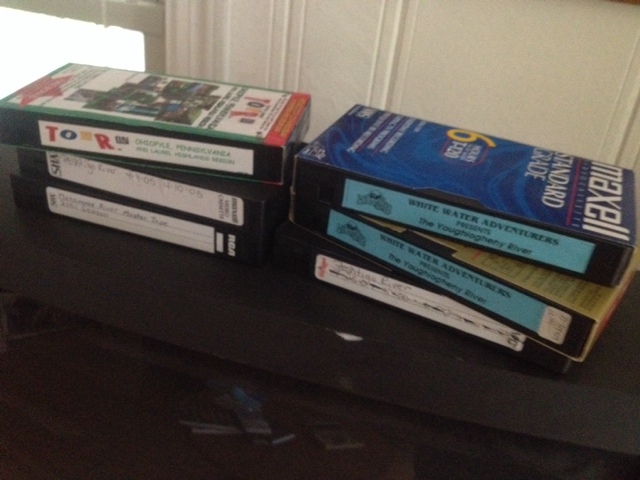 There was no camera to mount on your helmet to capture your own view. Therefore, the groups didn’t immediately slink away to fiddle with their own images, racing to share away on Facebook. None of that had even been thought up. Social still meant actually being social IN REAL LIFE. You sat by the other strangers, grouped together to watch the action one more time. Even the jaded guides would get in on the action, angling for a tip, enjoying the percolating glory of a run well done.
Some video boaters really did it right. They not only captured the action, but brought their own humorous comments and props to enhance the tape. Back then there was no do overs, no slick music, graphics, or editing. It was pretty much pop it into the VCR, and get burning copies. My personal favorite filmer was Zorb from White Water Adventurers in Ohiopyle, PA, with her finger puppets (the little shark saying “nom, nom, nom!”). Those were the days.
Up in Wisconsin, Ray Booth at Kosir’s Rapid Rafts was a mad scientist cooking up a helmet cam well before GoPro hit the market. He mounted a waterproof camera on an old ProTec helmet, with a cord running to a big Pelican box that was then worn hung on a belt around a guide’s waist. The rig was heavy, unwieldy, and terribly unreliable. But we got first person footage a couple times before the box leaked and ruined the setup once and for all. If necessity is the mother of all invention, then Wallace is the undertaker. 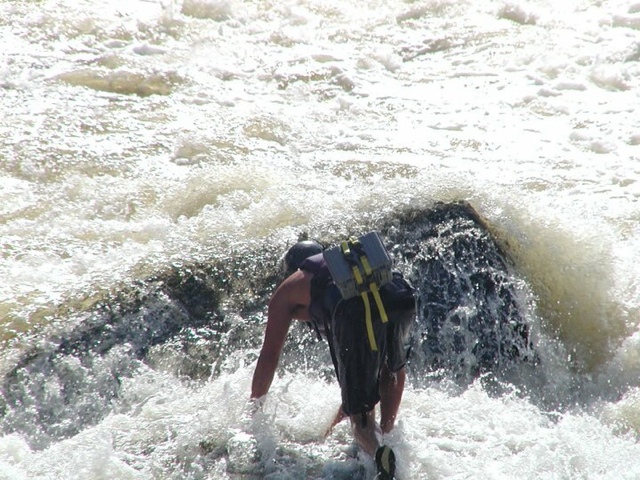 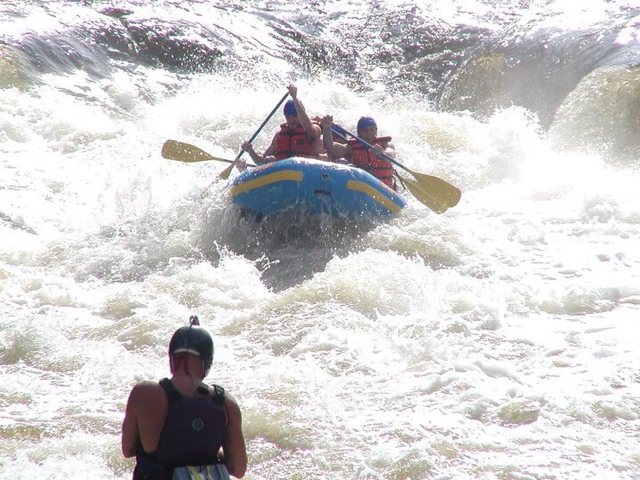 “Is it on?” Zac getting ready to capture a raft splat. 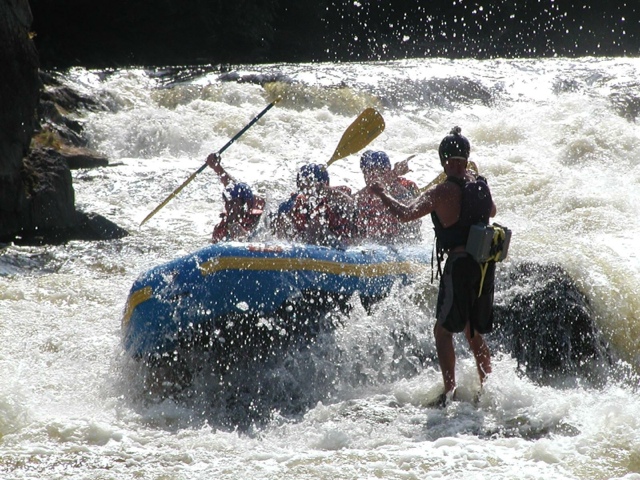 There was no YouTube channel to archive the movies. Instead, a shelf by the VCR held the stacks of clunky tapes, labeled with dates of trips past. If you wanted to see your friend’s stash of whitewater trips, then you had to go over to his or her house and spend time with them, share a beer and a laugh on a winter eve and plot the future while reveling in the past. You couldn’t park your ass in front of the laptop let alone sit at work and sneak a private viewing on your phone.
Back then, we felt far superior to the slide shows and even grainier
Super 8mm footage of our predecessors. VCRs were SOOO much easier than reel to reel, and lugging out the old screen from the closet. You could hit rewind! And watch it again! And pause it!! The wonders of it all. A DVD was unheard of.
But what’s that sound? Oh no! The tape is being eaten!! Pulling out the cassette, and twisted tape comes unwinding out too, snagged in the recesses of that infernal machine that only moments ago was your prized possession. Such was the way we old dirtbags used to relive those precious moments on The River. Looking ahead, we would have been amazed and very jealous. But looking back… We were very lucky indeed.