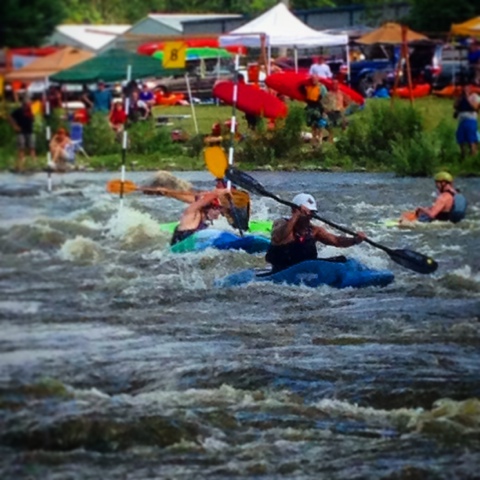 Adrian Ortiz charging to victory in the boater cross race. Photo by M.Toughill

Illinois may not rank on any paddler’s bucket list of destinations, largely hindered by lack of gradient and deep agrarian history that harnessed all available power from the rivers through low-head dams that still impact our waterways. However, there is a thriving paddler community. Most weekends in season find carpools being arranged at all skill levels as boaters travel 6 – 10+ hours to run rivers from Wisconsin and Michigan, to Mid-South gems in Missouri and Arkansas, and east to the Yough, and points down the Appalachians to the South East; but one weekend in July paddlers from across the Mid-West converge on Yorkville for the Illinois Whitewater Festival. 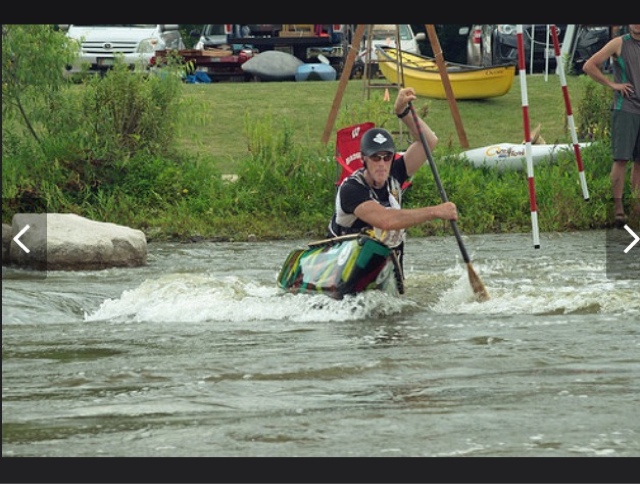 ​Sponsored by the Chicago Whitewater Association and hosting boaters from a number of clubs around the region, the 2015 IWF was included as a stop on the 49th annual Buttercup Slalom Series tour. This citizen-boating league welcomes all skill levels in down-river events around the region. The event also exhibits our sport for the visitors to the town’s own “Ribs on the River” celebration running concurrently along Hydraulic Avenue on the south bank of the Fox River.  The avenue predates the race course’s location in the denil styled “Marge Cline Memorial Whitewater Park” installed by the US Army Corps of Engineers to bypass the infamous Glen D. Palmer dam on the Fox River.  ​ 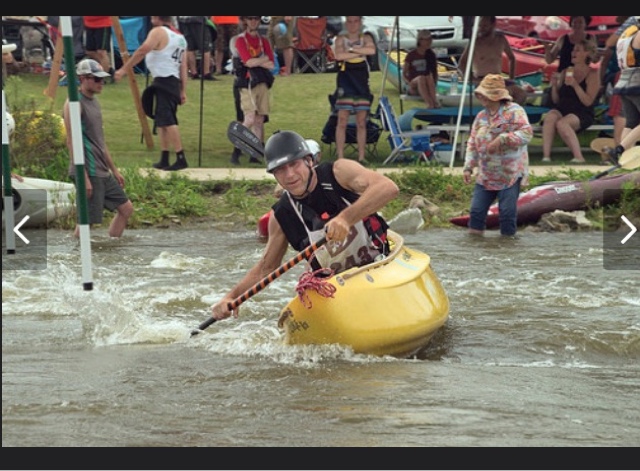 Andy Cocallas, CWA President and festival Chair, on the course
​The purpose of the CWA at inception; “provide educational information and training services to increase the safety, enjoyment, and skills of those paddling on whitewater rivers” –  (http://www.chicagowhitewater.org/cwa/history-cwa.asp, retrieved 07/15/15), and few embodied that purpose like the late Marge Cline. The CWA has connected paddlers with and instructed them on whitewater rivers in the area and around the country since 1972, and Marge taught a great number of them on and off the river. I was not one of her students but my first instructors were. The long-time paddler and instructor was the club’s river-mom and drill sergeant, and a former AW President. The club didn’t consider the park’s installation complete until it was officially christened in honor of her legacy within the local and national paddling community. 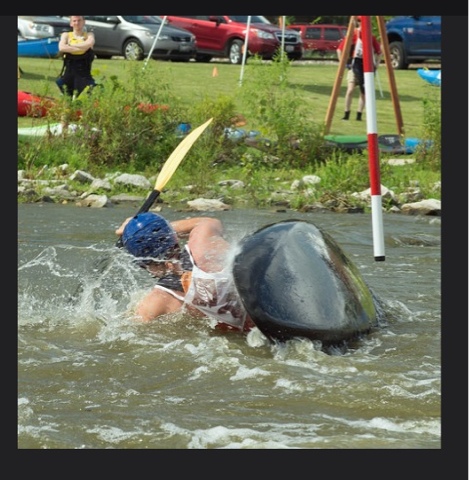 ​I’ve heard the idea of racing dates back to the second guy to own a wheel, and the CWA has been involved in fostering healthy competition on whitewater since early in it’s history, sponsoring “some type of whitewater race” since 1973. Until 1980, the club sponsored a wildwater race on the Peshtigo River, and since 1981, CWA has sponsored the “Spring Wolf Slalom.” (http://www.chicagowhitewater.org/cwa/history-cwa.asp, retrieved 07/15/15)
To have an event within fifty miles of downtown Chicago was unthinkable even ten years ago. CWA President and event Chair Andy Cocallas reflected on the significance of the event for the local whitewater scene, “it was real nice to be able to have it in the Chicago area. The Wolf is a great river, but having the Buttercup in Chicago was and is special to us. We are proud to bring the first Buttercup to Chicago!!”  As I congratulate him on the event Cocallas is quick to attribute my impressions to a dedicated staff of 12 club members who’ve devoted time over more-than-six-months to plan and prepare, and the legion of volunteers to set up, take down, provide safety, record keeping, and handle other of the myriad of tasks involved. This especially includes local racer Jim Tibensky,  who designed the slalom course for the 2015 event. 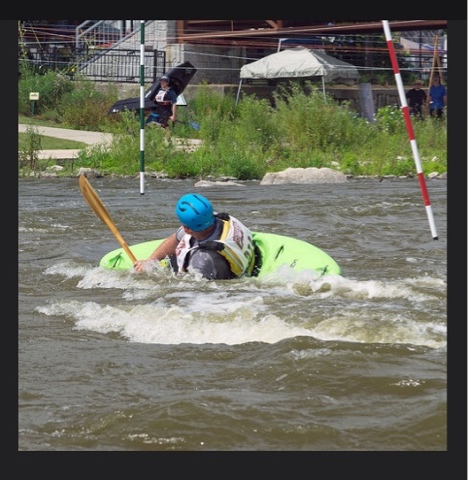 Club veteran paddler Dave McGovern rolled with the backseat Wallace in the tricky transition between gates three and four.
​“Jim just rocks it and I think he could make a swimming pool challenging!! We could not have a better designer for a place like Yorkville. I know even the best boaters were challenged with Jim’s course, but it was also perfect for the beginners running their first slalom.” Cocallas said.
​The event is as much a mid-season celebration of the river as it is a competition, reuniting some veterans and newbs who may not have run together since the winter pool sessions. Yet the competition can be intense, as the course fully exploited what the Illinois whitewater had to offer. Fifty-Three boaters made a total of 123 official runs through the course in 10 classes of hard boats. 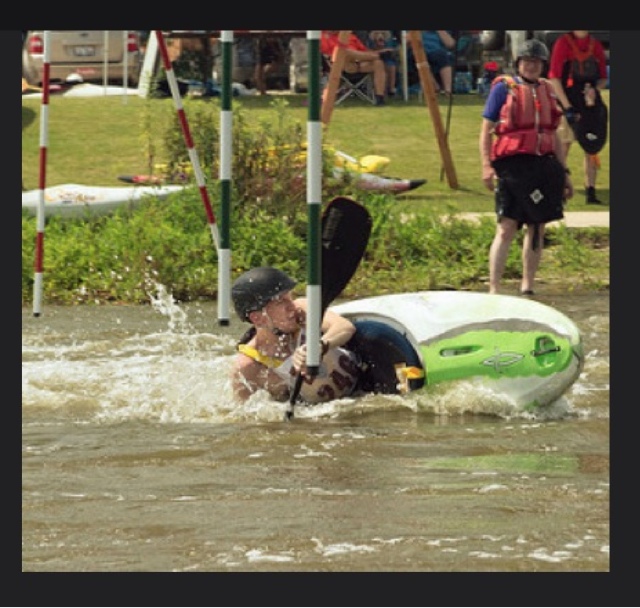 The course provided everyone an opportunity to get wet. 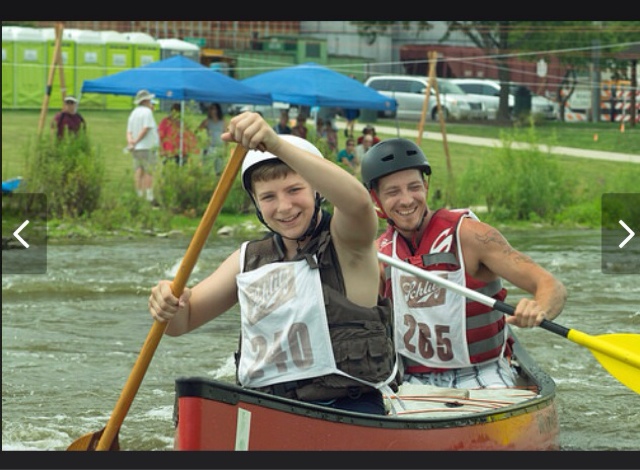 On a hot July day, the focus was on fun. 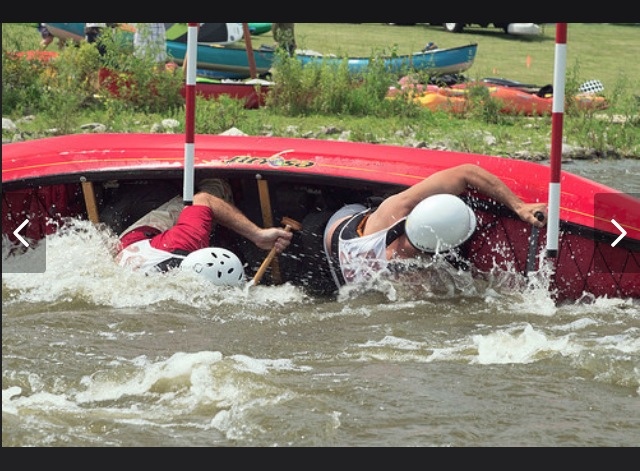 And nobody minded a swim;
​A  number of former Buttercup paddlers have gone on to national and international prominence in whitewater competition. The IWF stop is one of five races on the 2015 Buttercup schedule. Paddlers accumulate points throughout the season, and awards are handed out at the year’s end. It wasn’t all fun and games; some of these boaters are high caliber racers, youngsters on their way. 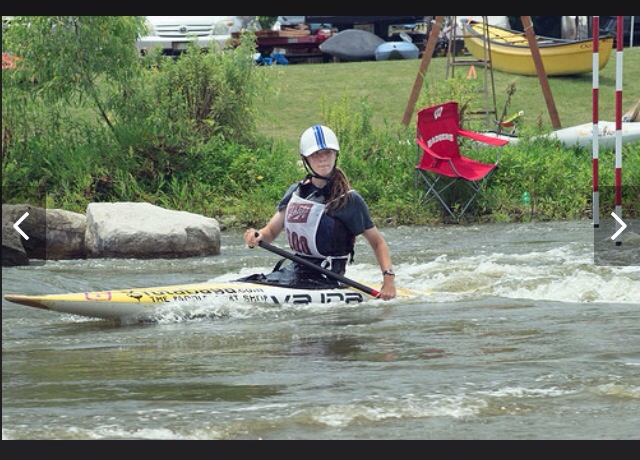 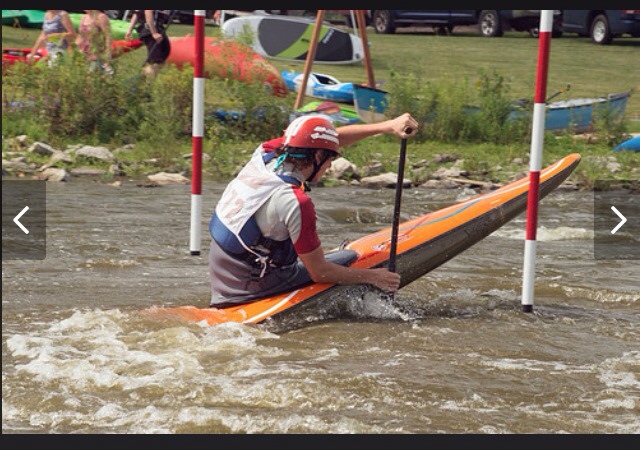 Cody Achatz, C1 Event winner made the turn through gate 3 with style 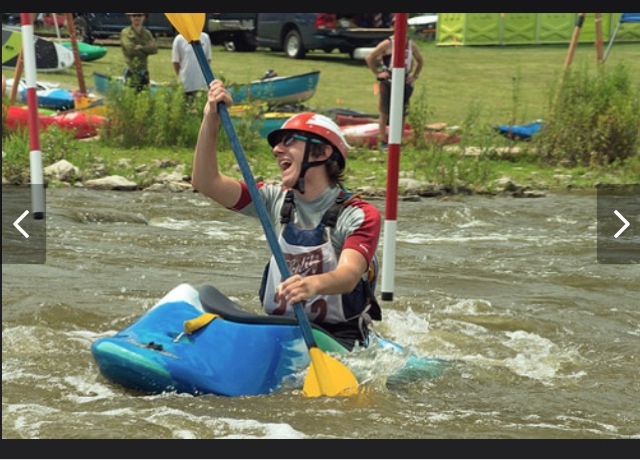 A laugh follows touching gate 3, a tough one in the Rock Star
​The format allows boaters to compete in all classes, and with a little networking many did. This kept things light-hearted as mistakes were more common in borrowed boats.
​However you look at it, the Illinois Whitewater Festival is a win for the paddling community, exhibiting a positive face to the local community, showcasing the recreational value achieved from the investment in converting and bypassing an historically dangerous low-head dam, and bringing paddlers out for a weekend at home to socialize and compare scars and war stories from chasing the last spring run-off.  I got a little wisp o’ nostalgia myself as the Dirtbag King and I took to the water on Kosir rafts after the official event concluded. With no disrespect to the ongoing awards ceremony in the shade of their riverside tent, we bombed the course Dirtbag style as a flotilla of rented inflatables joined us as if to protest the omission of a rubber class. It’s all about going down the river on something weird, after all  😀 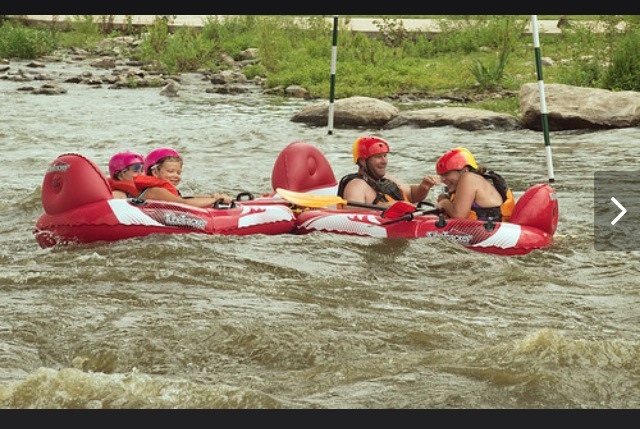 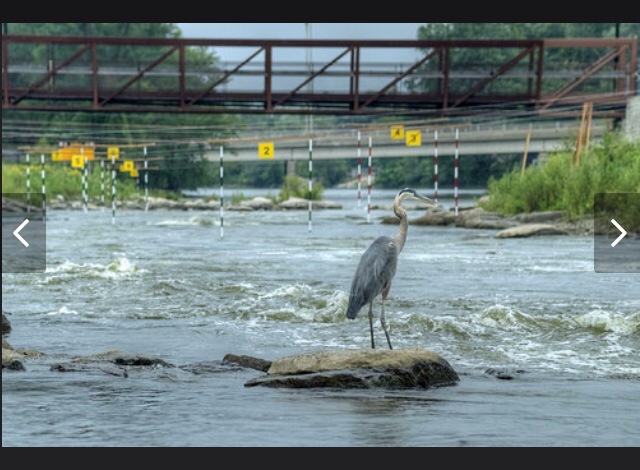 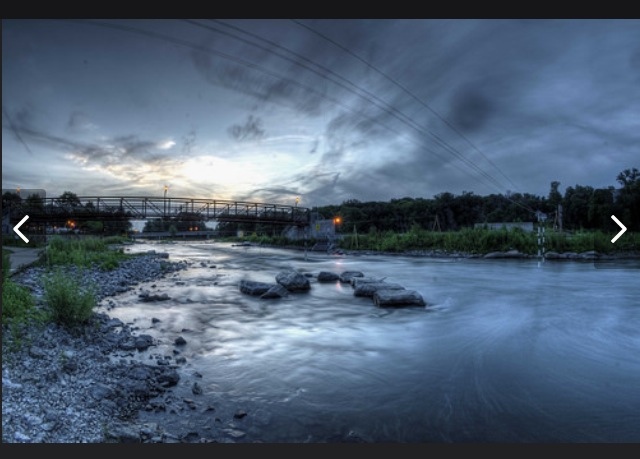 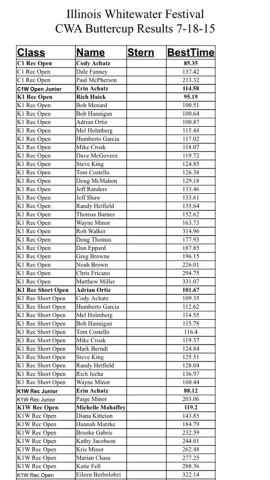 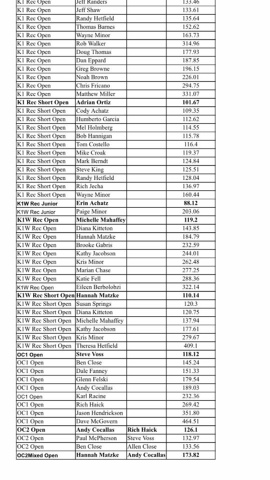 {EDITOR’S NOTE: The Illinois Whitewater Festival was fun for the  folks watching too! I took the following pics of the food vendors at “Ribs on the River”, after sampling some of their goods, as well as the awesome basement beers offered by local home brewers. There was live music all afternoon, and amusements for the kids as well. All you FIBs (read: Friendly Illinois Boaters, not F~€king Illinois [email protected][email protected]) should not miss this event next time! In the words of our homie Adrian Ortiz, a DBP Admin and former CWA president who came in first in the races, “it’s all about bringing people from every level of paddling together to enjoy the community and the river.” Cheers!} 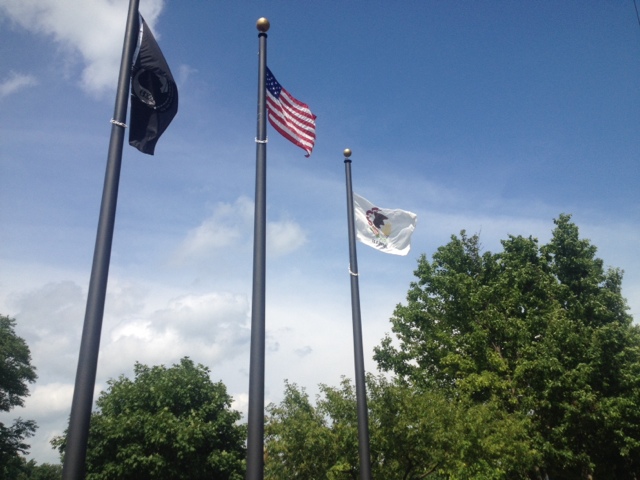 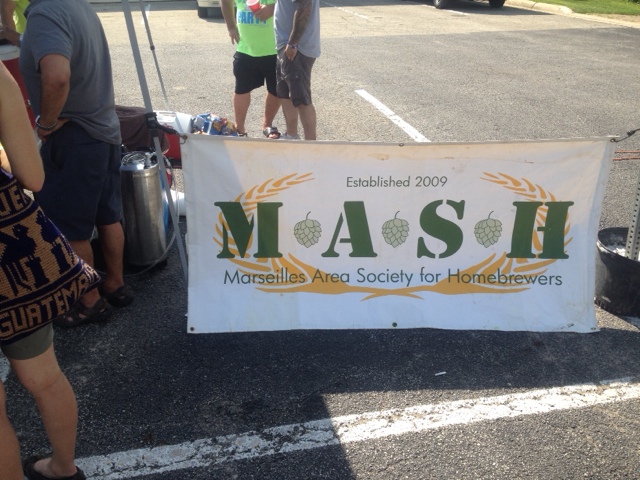 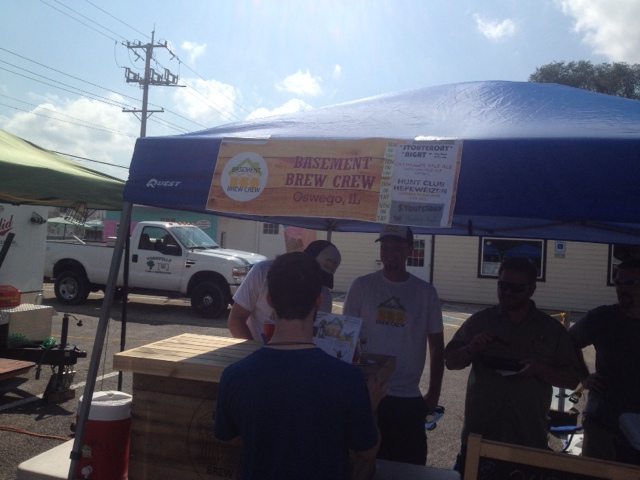 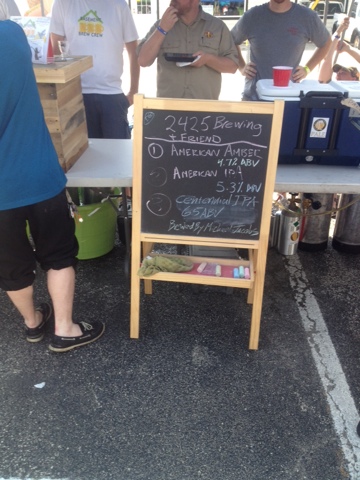 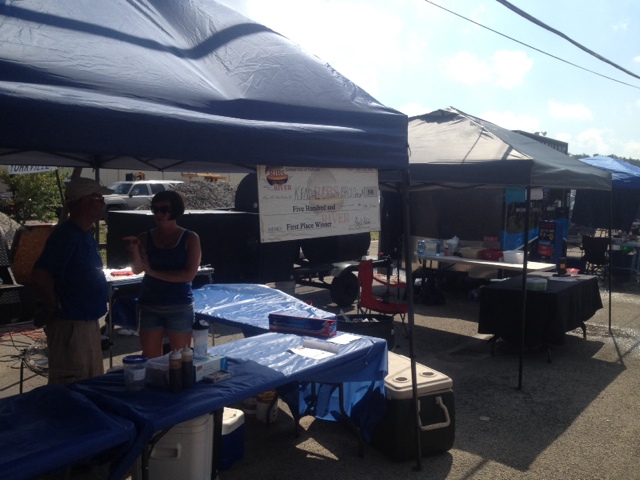 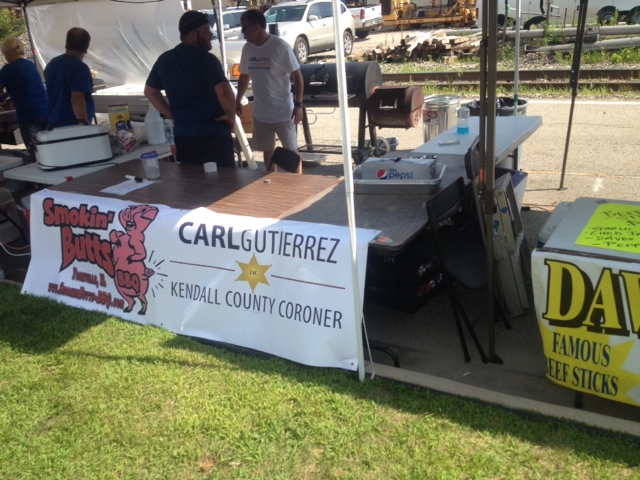 Best ribs there, in our humble opinion 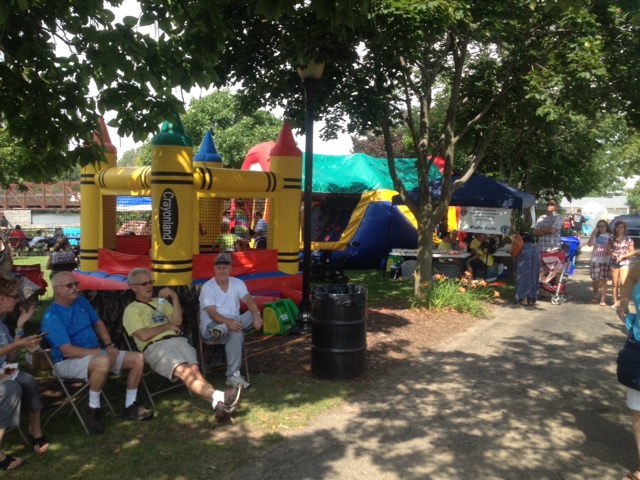 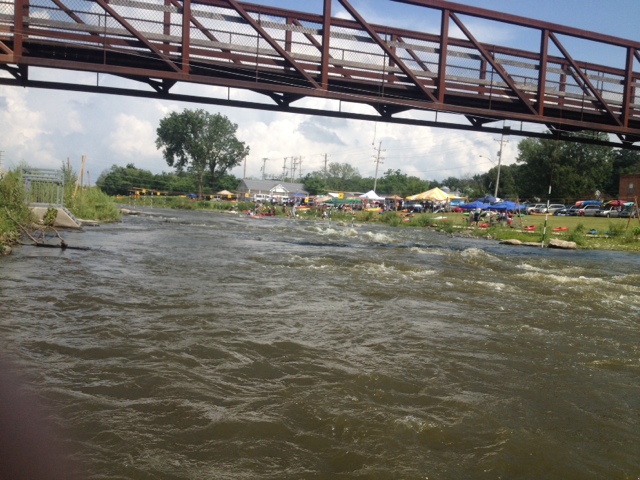 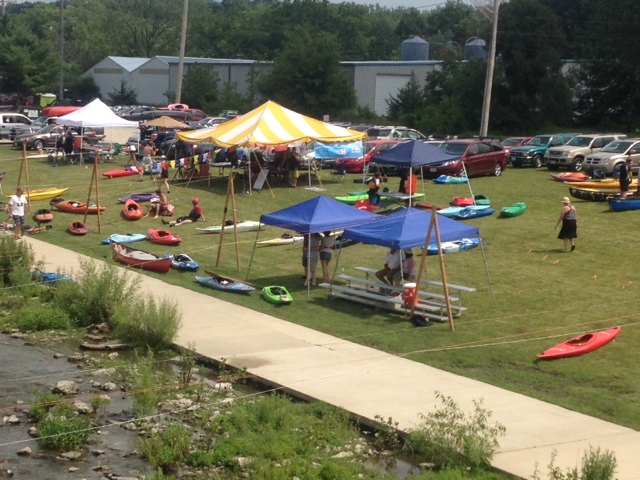 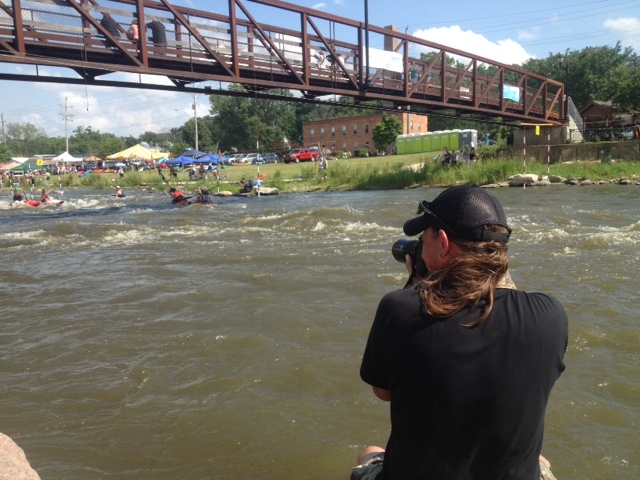 Chris Doing getting the shots 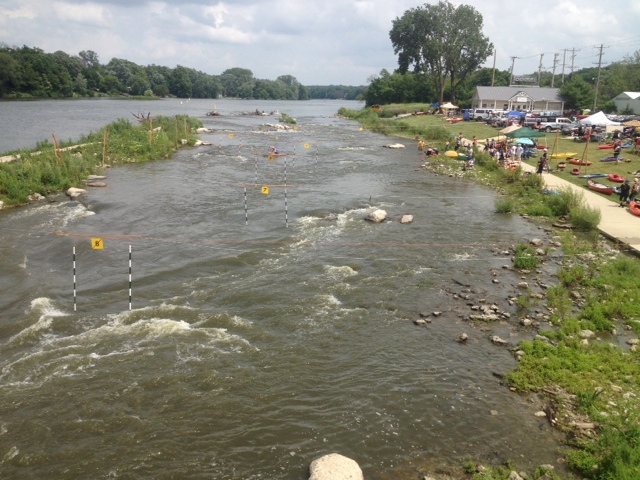 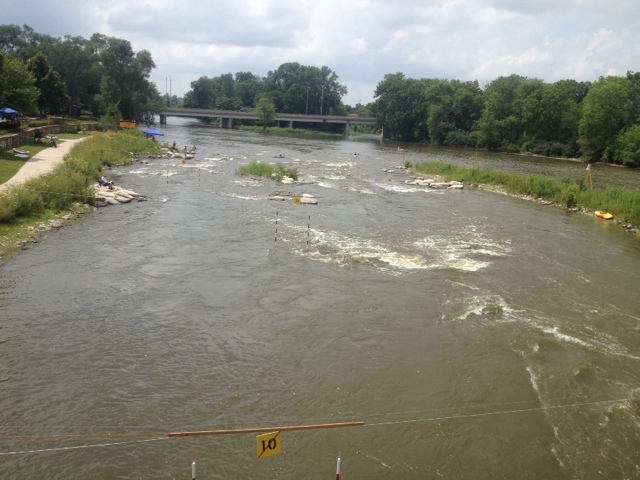 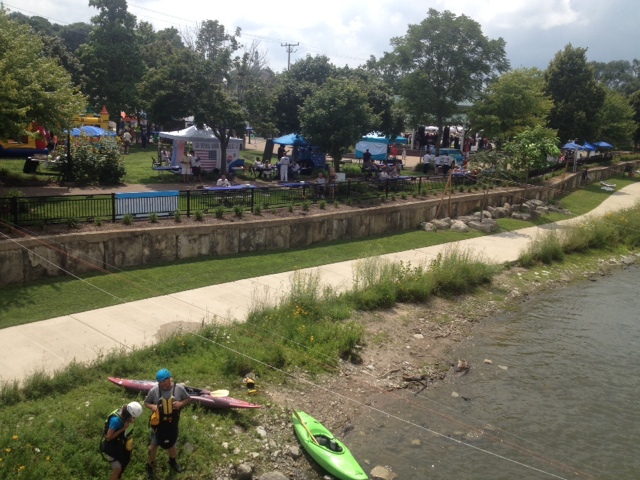 One reply on “FLATLAND DIRTBAGGIN’ ~ CWA and the Illinois Whitewater Festival. Photos and story by Chris Doing”