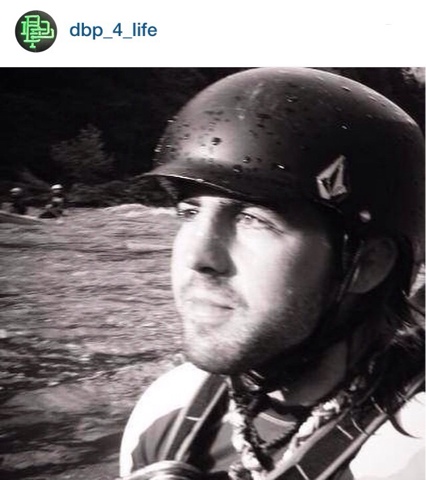 PADDLIN’ & PARTYIN’ DIRTBAG STYLE ~ FRANK FEST 2015 RECAPPED. by Chicago Toughill and Sam Hood. Photos by Heather Reizner and Chris Doing.
Frank Fest is a Wisconsin dirtbag’s favorite time of year. We get together with our friends and comrades from the various raft companies on the Menominee River to celebrate the river life and our friend Frank Sade. This year was the second annual event, and it was off the hook!
RACING THE GORGE & RODEO SURFING COMPETITION. by Chicago Toughill 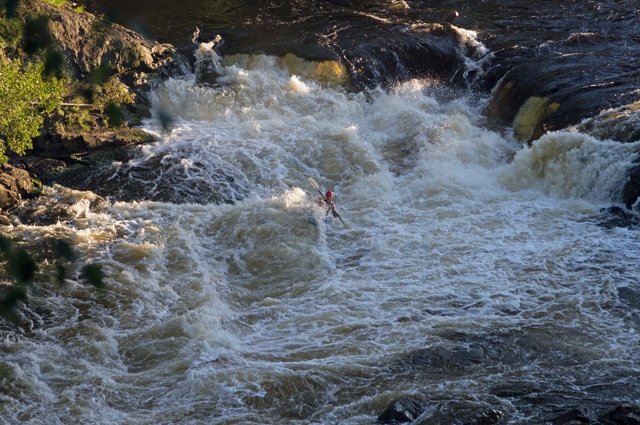 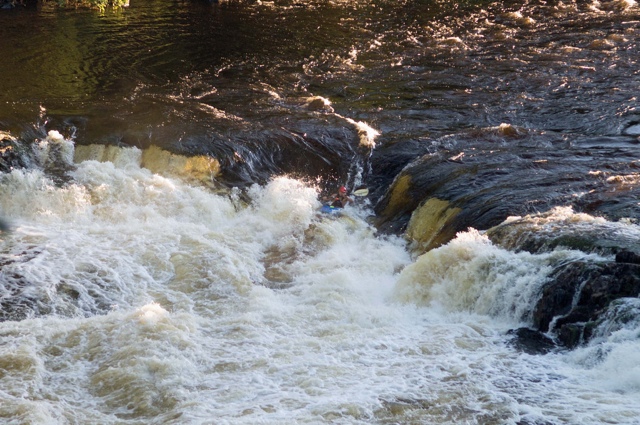 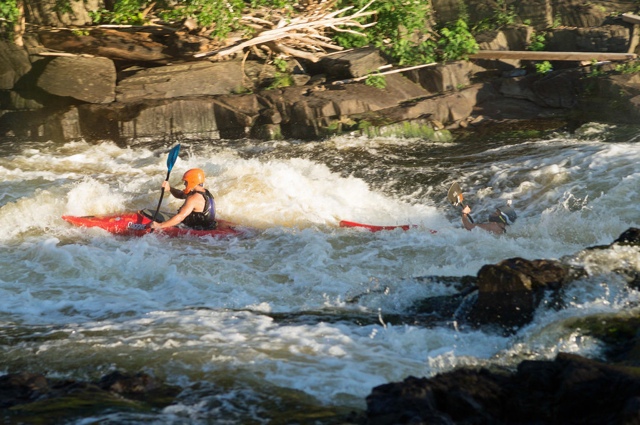 This year was the first year that DBP hosted a race for kayaks and rafts. Originally conceptualized by Aaron Erdrich, who was unfortunately unable to attend due to personal matters to attend to in Michigan, the race consisted of two divisions – kayaks and rafts. DBP Admin Abe Herrera from Small World Adventures in Ecuador provided a massive prize package for the contestants. 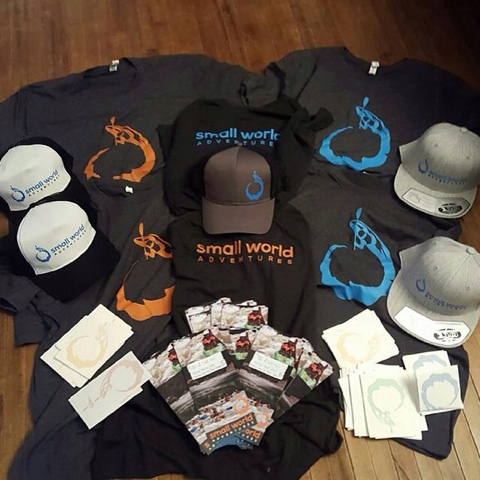 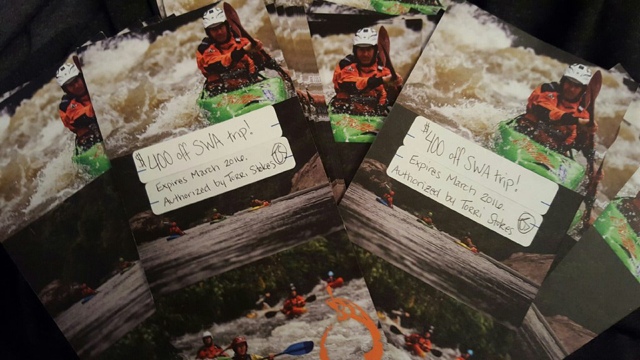 The races in Piers Gorge were set to start Saturday evening on August 1st. As the shadows of late afternoon began to grow longer, boaters began to trickle up the trail carrying their kayaks, and a small but vocal crowd of locals and dirtbags assembled on the banks and cliffs of the river to observe and cheer on the racers. 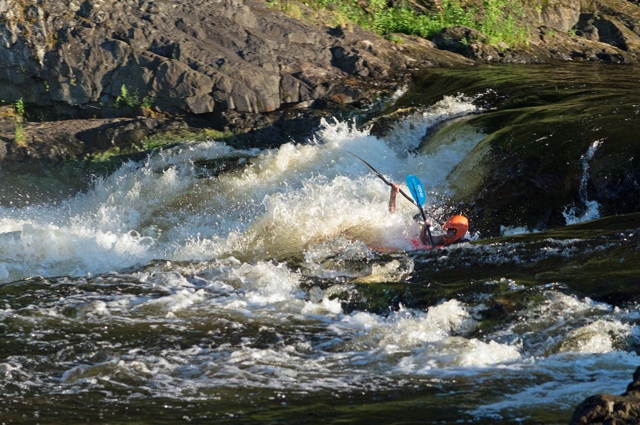 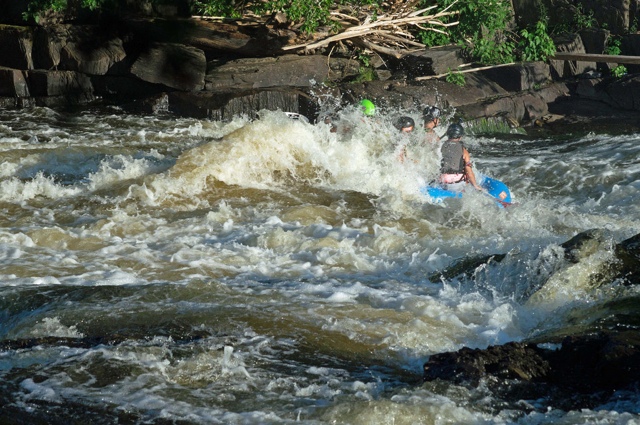 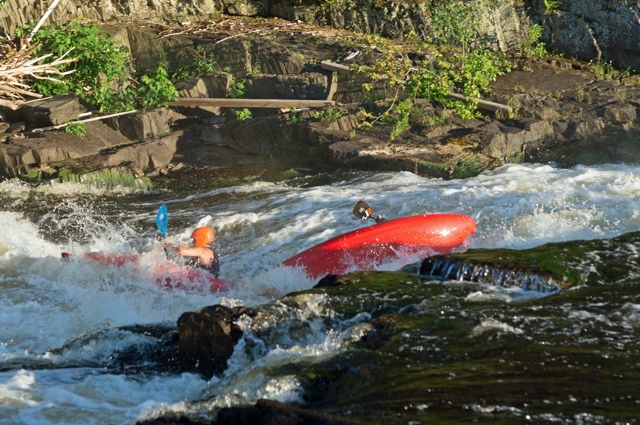 The kayakers went first. Two heats of four boats each squared off for a sprint from the beach to a point of rocks just past the island. The top two finishers of the heats then squared off for the final run, where the winner was awarded an $800 off adventure for two at SWA. The four finalists ran fairly close, but the highlight for the crowd was local guide Mike Keller’s WALLACE (you can imagine the hoots and catcalls in the walled in Gorge!) and swim at the base of Mishicot Falls. Dirtbags love their carnage! 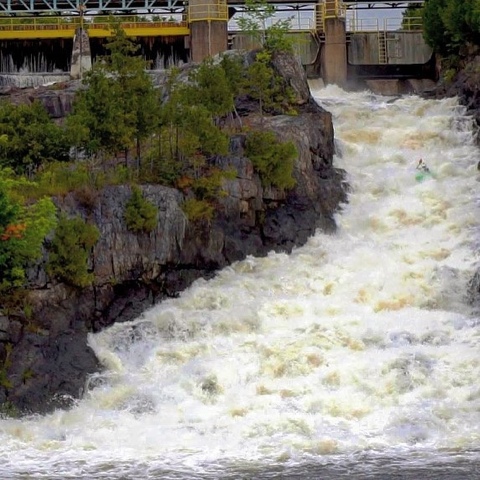 The final race was super close! Brazilian kayaker Marcelo Galizio, the favorite to win, who has local ties with one of the outfitters, powered his way to the win with a superb start off the beach. Touching the finish about two boat lengths ahead of the others, he won the trips and a SWA flatbrim and teeshirt, as well as some decals. Second and third place went down to the wire, with Will Betke just edging out DBP Admin Willy Heindel. Betke also walked away with a hat and shirt. DBP Admin Sam Schank pulled in last, but the separation was measure in seconds on those last three boats. All of the contestants got SWA decals. 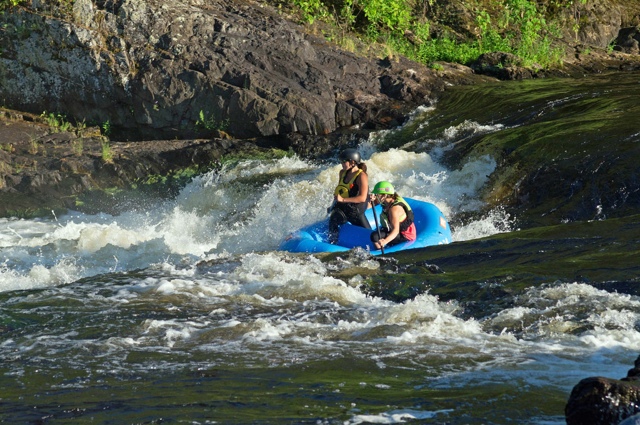 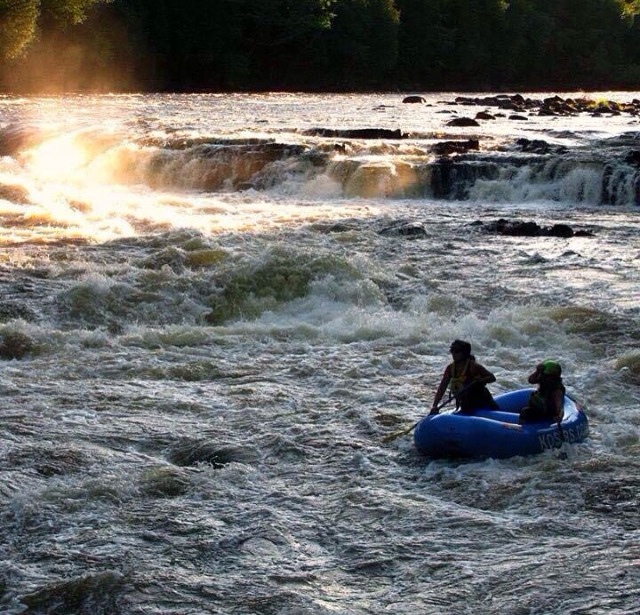 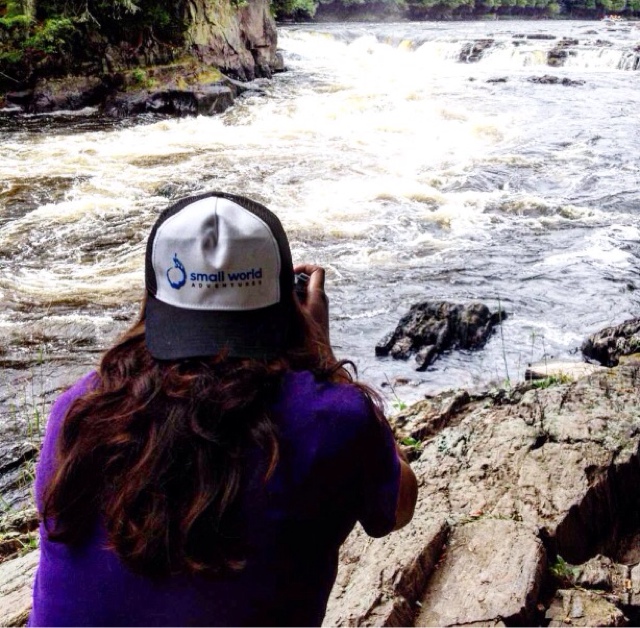 Sam wearing her new SWA hat in the Gorge

DBP Admins Sam Hood and Mackenzie Bryant won the raft competition because, well, Aaron wasn’t there to whip everyone! That and the fact that the other companies were banned by their owners from participating… At least that’s their story! WALLACE!! The ladies won flatbrims, shirts, and decals, and everyone agreed they looked much better than anyone else who could have won them.
After the races were over we mounted up for the five minute ride back to the Barn Party to hand out the awards and jam, eat, and drink the night. The Michigan State Park rangers, sometimes surly, were super helpful this nite, even tossing the many empty PBRs I escorted out of the Gorge tucked away in my PFD. 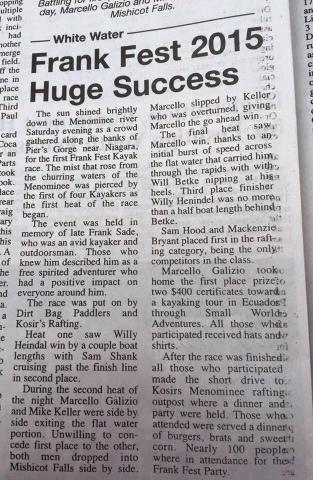 Coverage in local paper. Note that Frank wasn’t a kayaker, he was an avid RUBBER PUSHER!!

Sunday started with high winds, thunder and lightning, and hail storms which raked the area repeatedly throughout the day. Although we were able to run our morning raft trip (alas with hangovers…), we cancelled the rodeo scheduled to be held at Terminal Surfer Rapid at the end of the Gorge, mostly because the observation point is very exposed. That and Aaron wasn’t there to entertain the hell out of us! Val Jean Marco of Liquid Rush showed up with his kayak after partying all night with us, and for that he was awarded the DBP shirt and decals. Frank would have been a stud in this particular event, and would certainly have competed in the raft race held in his honor. We are already looking forward to next year’s Fest! 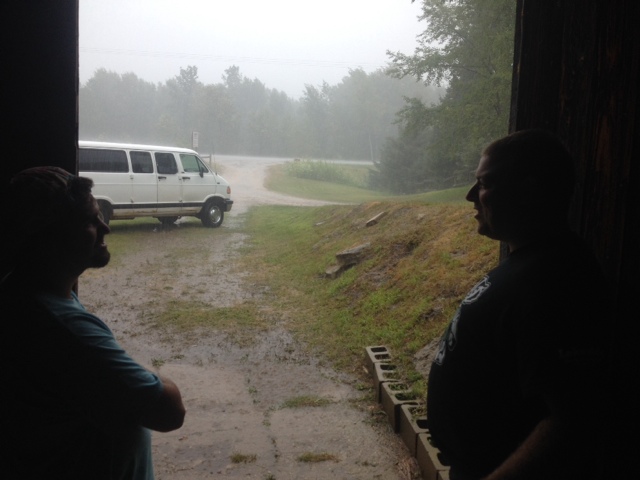 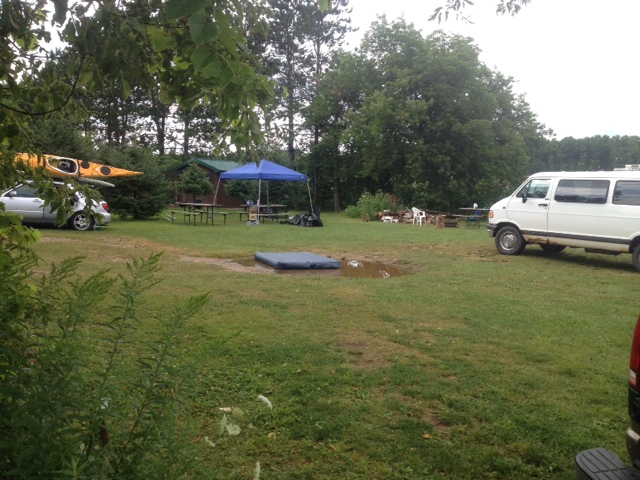 We held a surf competition on this abandoned mattress in that puddle! 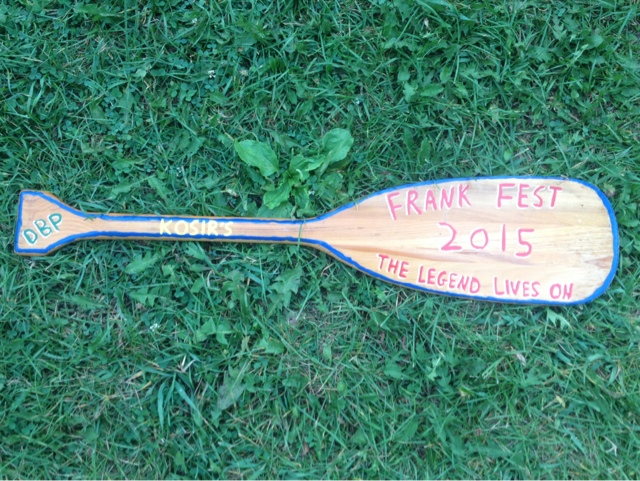 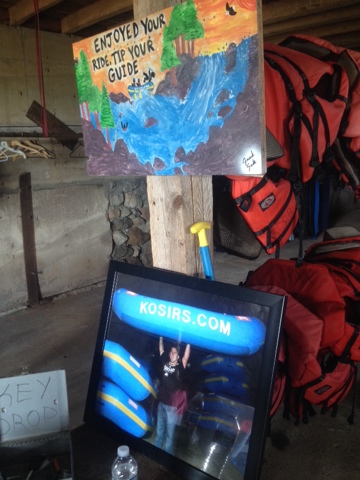 There’s no better place than Kosir’s Menominee Outpost barn on a summer night. Filled with all my best friends, rafts, beer pong, firepit, PBR, and JMan’s cooking, Frank Fest 2015 was a night of so many laughs.
Piers Gorge was one of Frank’s favorite places. Mackenzie and I ended up being the only raft in the competition so we R2’d our donut (a Hyside mini-me) about 6 times down the Gorge, playing and giggling like little girls. I never knew Frank personally but you can almost feel his vibes bouncing off everyone when they talk about him. 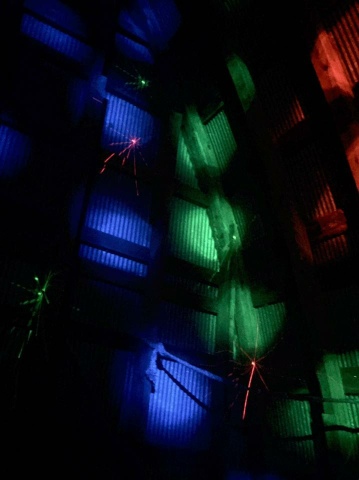 Frank Fest is more than just a raft/kayak festival – it’s all for the love and memories that everyone has for Frank, and coming together to celebrate. DJ Lance had Frank’s music pumping, fog machines and crazy lights beaming through the barn. Intense rounds of beer bong played out in one corner, Dirtbags hanging around the tables smiling, laughing, and chanting. 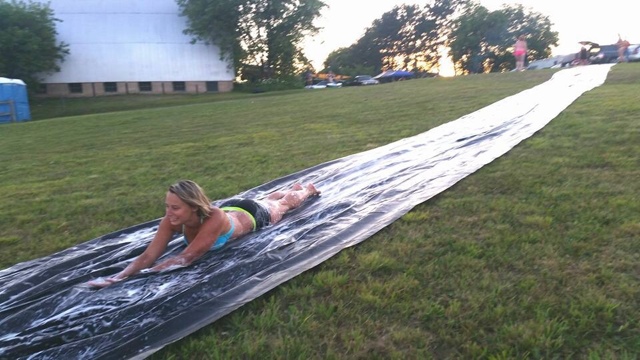 The fire outside was memorizing. It was heart touching looking at all the friends around the campfire holding either a PBR or strawberita, Frank Vibing. We had a raft blown up for wrestling of course, an event within itself and always entertaining. No matter where you are, you’ll never miss a match. The wrestlers are announced and called up by megaphone. A Slip-n-Slide crossed the whole field. Dirtbags love soapy slip and slides. 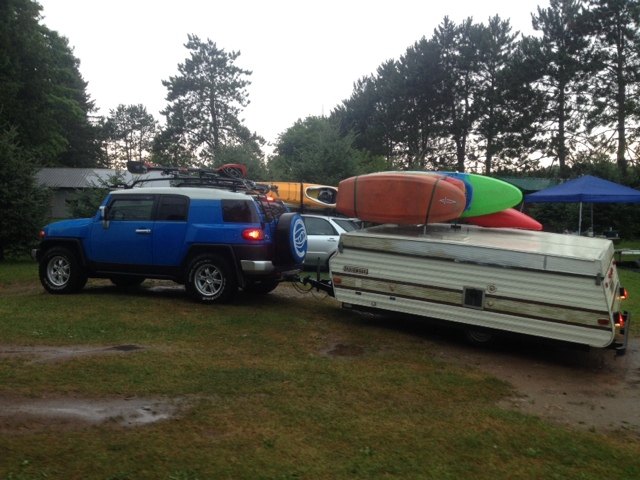 There were over 100 people in attendance, all fed by the one and only JMan. He had a kitchen set up underneath an EZ-up, serving every single dirtbag that came. There were brats, corn, hamburgers, hot dogs, chili, chips, and more. He cooked all night, partying and catering like a true brother would do. The food, friends and festivities made the whole evening a blast. 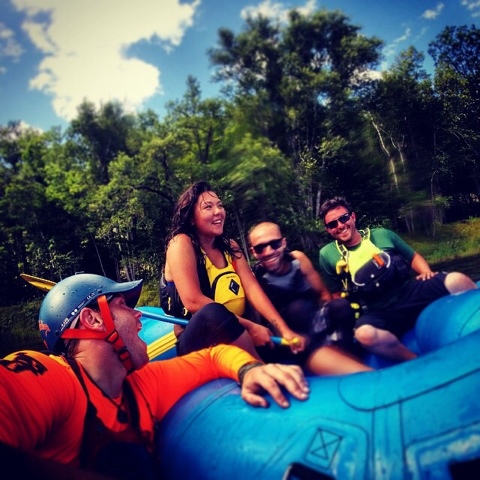 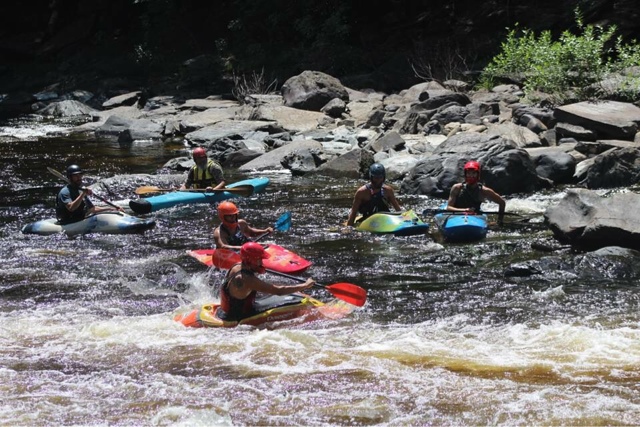 Frank Fest is a beautiful tradition that makes us all feel a little better about being without a loved one. Our friends we meet in life make the world go round. Sometimes our lives are so busy we don’t realize the time passing us. So every once in a while, take a second from your rafting, climbing, and exploring, and tell your loved ones you love them. That… that makes Frank Fest most beautiful – all my friends coming together to recognize their love for Frank, his love for us, our love for LIFE. 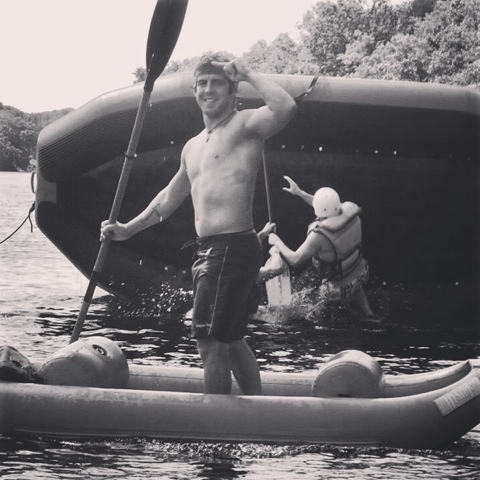 SO THERE’S OUR REPORT FROM CHICAGO AND SAM ON THIS YEAR’S FRANK FEST. Come on out next year. We will feed you, give you a free place to sleep, paddle and party, dance and wrestle, like true DIRTBAGS. Cheers!! 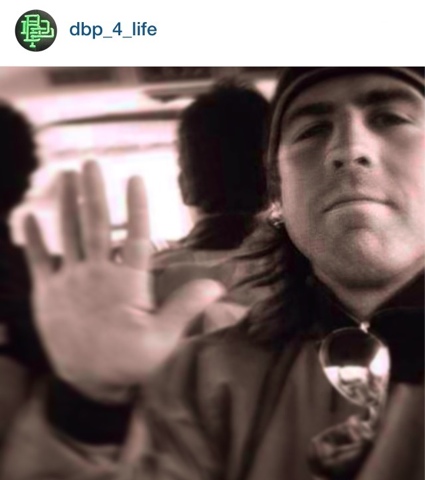 The sponsors of Frank Fest 2015