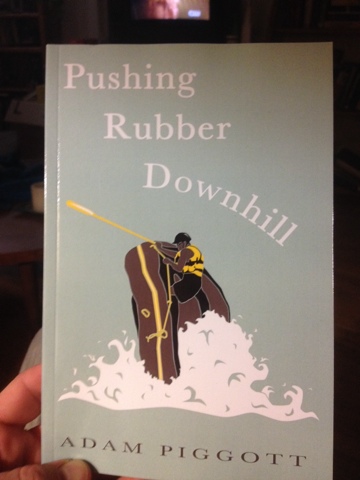 We at DBP MAGAZINE ONLINE are stoked to share with you the final excerpt from Adam’s new book “Pushing Rubber Downhill.” This last part concludes Chapter 15. You can read parts one and two in the articles posted on the previous Fridays of this month. Cheers!
Adam Piggott’s first kayak was a Perception Dancer in 1986. He began commercial rafting in 1995 on the Tully river in Australia, and subsequently worked as a guide in Canada, Uganda and Italy until 2010. He has written articles for numerous magazines over the last 20 years, and has written three books, the first two of which he threw away. ‘Pushing Rubber Downhill’ is his first published book where he details his experiences rafting around the world. He now lives in Melbourne, Australia with his wife, a cat, a Ducati, and a few Gibson guitars. He still has the Dancer.
Part 3 ‘A Mazungu in Al’s Bar’
We ran a few more big but straightforward rapids, and then we paddled across another long pool. We pulled over to a small protected eddy on the river, right where some more local village boys were waiting for us. They hauled the rafts out of the river and carried them away on their heads. Beside us roared another impassable cataract. The clients followed the porters while Milo and Corey pointed out the features of Itanda rapid. Their tones were serious and their body language more subdued than before.
“We don’t run that, do we?” I asked them.
“No,” said Milo. “That would be silly. We run a tiny part of the bottom of it. It’s the biggest hole of the trip.”
“It’s called The Bad Place,” Corey said. He held my gaze for a moment, and then he walked off.
Milo and I followed him down a hill to where the three rafts sat in a tiny eddy. We watched Eddie’s crew climb into the raft. He gave them a pep talk, and then they paddled out of the eddy while keeping very close to the right hand bank. They passed an enormous hole in the middle of the river, and then they headed sharply to the left and out into a gigantic wave train.
“He missed the hole,” Milo said. “Some clients you don’t want to take in there. This isn’t hero shit.”
Corey brought his raft out of the eddy and followed the same line. But instead of heading out to the wave train, he squared his raft, which rose up and dropped out of sight.
“He’s in there,” Milo said. “Watch this.” I saw the raft reappear, its 18 foot length vertical as it attempted to claw its way out of the hole, and then it disappeared from sight as it was sucked back into the stopper, and then the raft was surfing, the hole flinging it in violent circles while bodies were thrown around like rag dolls, until at last the stopper released its grip, and the raft floated out with its main thwarts hanging in broken pieces.
“That’s why the thwarts are clipped in,” Milo said. “The clips blow out instead of the thing being ripped off in a surf like that. Corey will clip them back in once he has his crew together.” He clapped me on the back. “Now it’s our turn. We’re going to go right in the guts.”
“Lovely,” I muttered.
We swung out into the heaving water, passed close to an enormous stopper wave, and then we rode over a rising mound and dropped into the biggest hole I’d ever seen. It stretched far above our heads, and I had a brief moment to wonder how we would ever get out before we slammed into its fury and I was thrown into the violence of the Bad Place. 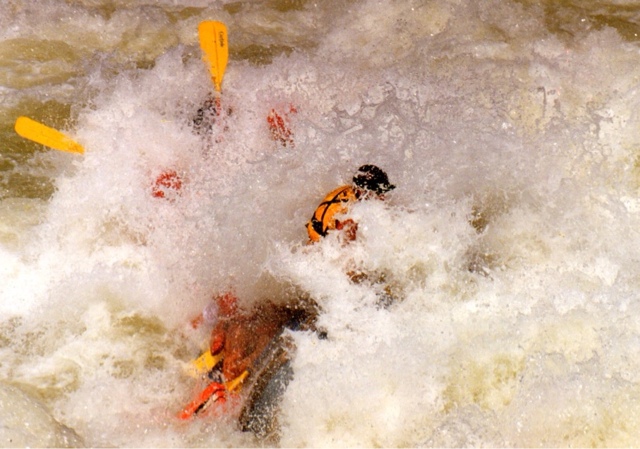