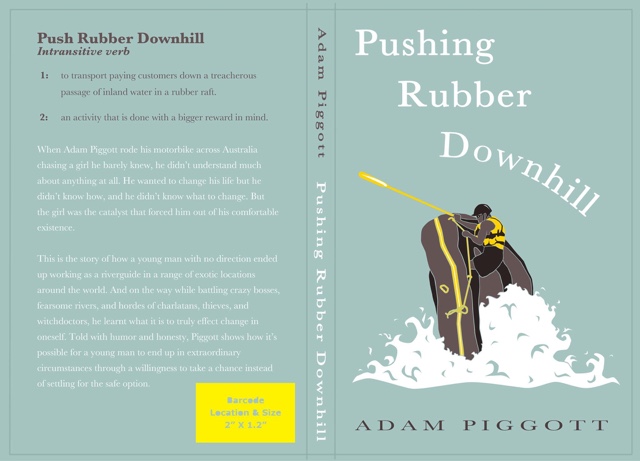 Recently we introduced our readers to the rafting memoir “PUSHING RUBBER DOWNSTREAM” by Adam Piggott. In the book he details the story of his life spent guiding rivers around the world, starting with his humble beginnings in Australia, to the wild whitewater of Canada, and on to the epic adventures of paddling the White Nile in Uganda. We caught up with “Mr. Adams” (as he was known to the locals during his time in Africa) to discuss the book and other facets of rafting and whitewater.
DBP: As you detailed in the book, you guided rafts on four continents. How many rivers in total have you been paid to push rubber down? Which one was your favorite?
AP: I’ve done paid guiding on over a dozen rivers on four continents. My all time favorite river has to be the North Johnston river in Far North Queensland, Australia. A very difficult class V pool/drop river in a world heritage rainforest area accessible only via helicopter. Trips were either 2 or 5 day with small camps set up at intervals. We took everything in and out, including all rubbish. The new guides had to take the shit-barrel.
DBP: Being a raft guide myself, I know that on the river it’s all about the team. We meet many interesting characters in your story. Who was your favorite co-worker?
AP: Not a fair question. How can you ask me to choose from such a disparate and motley collection of awesome individuals? The friendships we make as guides with our colleagues are real and genuine connections that last the rest of your life. It’s the best part of the job.
DBP: You got Wallaced pretty hard on some of your trips, especially on the Nile. Did you ever have a swim where you thought, “boy, I was lucky to survive that one…”?
AP: So that’s what ‘Wallace’ means. I’ve been trying to figure that one out. I detail a swim in the book that I took on the Nahatlatch in British Columbia. I recirculated three times in a very nasty hole with a massive downstream recirculation in extremely cold water. When I finally got out I went straight into an even bigger hole. That’s when I thought my time was up. The whole thing lasted probably a couple of minutes but it felt much longer than that. I only got out when the company owner through me a line. 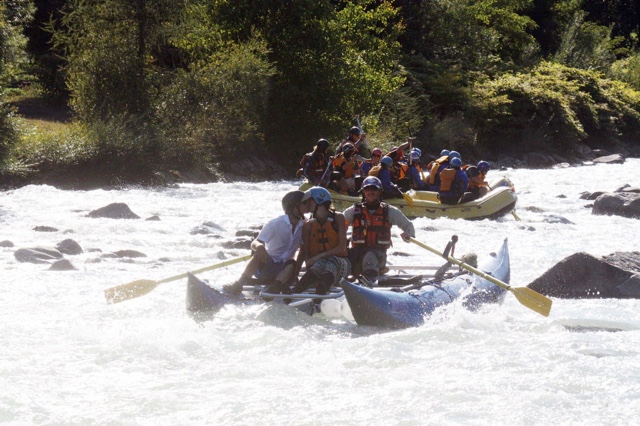 DBP: Dirtbagging is a full time endeavor, both on and off the water. Which place did you have the most fun after hours?
AP: Too many to mention. The most memorable was ‘Al’s Bar’ in Kampala, Uganda. It opened at 10am and we were often there at that time right through to when they kicked us out at 6am. Mind you, I also owned and operated my own late night bar in Italy which was across the road from the main rafting base. It was called, ‘Liquid Club’, and we directed all punters too it from 5 rafting operations in the valley. Good times.
DBP: You started your career in Australia working the Barron River. Tell us a bit about this river. Do you have any advice for aspiring rubber pushers based on your experiences there?
AP: The Barron is a low water level shithole for most of the year, but it’s quite technical and a good place to hone your skills. When it gets up in the wet season it’s a lot of fun, however. The advantage of that part of the world is that you can raft all year round. So 12 months on that river is worth 4 seasons in other parts of the world due to the season window being so short. 12 to 24 months straight on rivers like the Barron and the Tully, (not a shithole), gives a new guide a huge amount of experience in comparison to other river runners. This held me in good stead when I looked for work overseas. At the time, Tully guides had a tremendous reputation around the world. So if you’re starting out you need to raft all year, not just for a few months in summer. Travel is key for this if you’re living in Northern climes.
DBP: The paddling community world wide is small and tight knit. Even those fellow dirtbags whom we don’t know personally impact our lives, and we get to “know” many great individuals through social media today, and magazines, journals, and the Internet before that. One such character that impacted me as I developed was Hendri Coetzee, a co-worker and friend of yours who entertained my friends and I with his writing and videos back in the day, before his untimely death in 2010. Please share with us a good memory of him.
AP: Hendri’s death was a major blow to those of us who worked with him. When he joined us on the White Nile in 2000 he was very wet behind the ears in terms of life experience. We took great delight in taking him along on impossible situations to see how he would react. A great source of mirth was his wooing of a local crime-lord’s young teenage daughter. We let him get a fair way into the courtship before we broke the news of just who he was dealing with. He spent about 2 weeks in hiding terrified for his life. Hendri invited me along on his source to sea first descent of the Nile but I wasn’t able to commit to it. That decision is one of my very few rafting regrets.
DBP: The rafting industry here in America is in marked decline. All through “Pushing Rubber Downstream” you are confronted with ineptitude in the front office and callous ownership. What is your take on how this has affected the profession of guiding?
AP: This is your best question and I think my answer would be too in-depth for the space allowed in this interview. I’ll get back to you with a proper answer in the near future.
DBP: The gear available today has improved tremendously since your early years, especially for cold weather. What was your standard cold weather gear when you guided in Canada?
AP: Oh man, I had no money and no idea, so my cold weather gear sucked big fat donkey balls. A wet suit, a crappy top, (without any dry seals), some booties and some cheap thermals. I froze my butt off in Canada. 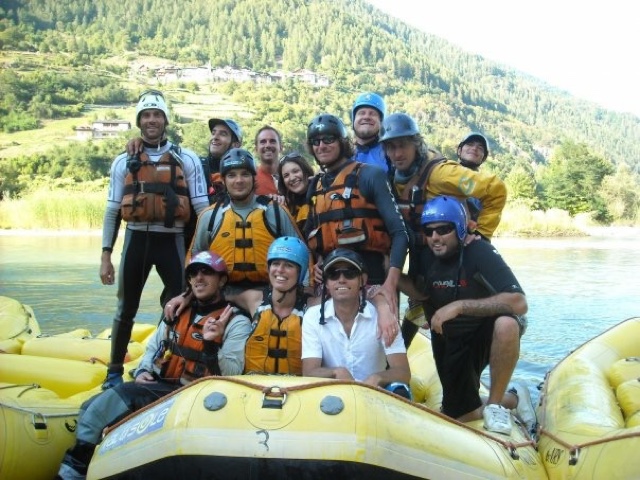 Adam and friends in Italy
﻿

DBP: You end the book in Italy, traveling up into the Alps to start yet another season. What was the whitewater like there? Can we expect a sequel?

AP: I spent ten years rafting in Italy on the same river, the Noce, (pronounced Noh-chay). It was a continuous flow Alpine river which was completely unforgiving at certain water levels, (a competitor in the 2010 European rafting champs tragically died on it when her raft capsized and she took a bad swim.) I loved the river as it had many different sections and it was surrounded by Alpine forests, mountains and castles. And between trips we would sit on a restaurant terrace and drink prosecco and eat pizza. It was also one of the few rivers where I made really good coin. But all these details will of course come out in the next book, a sequel, hopefully out later next year.
DBP: Thanks for your time Adam! Or should I say, Mr. Adams!! Any last words of wisdom for the rubber pushers of the world today?
AP: Don’t surround yourself with people who always agree with your opinion; you never learn anything that way. If we always agreed on everything then the world would be a very stale place. My old rafting buddies range from the extreme left of politics and world-views to the extreme right and everything in between. That is as it should be and I love them all. Challenge yourself with differing viewpoints and ideas. This is the most important thing that any person can do growing up in today’s world.
Adam’s blog:
http://adampiggott.org/
Where you can buy the book:
http://www.amazon.com/Pushing-Rubber-Downhill-Adam-Piggott/dp/1514827875/ref=sr_1_1?s=books&ie=UTF8&qid=1444034057&sr=1-1&keywords=adam+piggott
On Facebook:
https://www.facebook.com/Pushing-Rubber-Downhill-115030735511805/timeline/?ref=aymt_homepage_panel