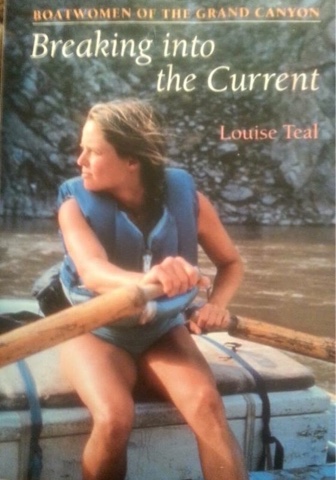 One of the most favored books in the whitewater section of my personal library is “Breaking into the Current – Boatwomen of the Grand Canyon” by Louise Teal. The copy that I have is warped and buckled, the pages are stiff and mildew stained from an unknown number of trips down the Colorado River in the Big Ditch. “Keep it, I think you’ll like it,” was all I was told. I flipped through the pages and read a few passages. That was all it took, I went to the beginning and was riveted to every word. I’ve returned to the book again and again over the years.
Louise started her Canyon career in 1974. By the early ’90s she had collected the stories of more than 40 women who had worked there as well. In the mid-nineties she decided to put some of these narratives in one book. To put all of these stories in one publication was a bit daunting to say the least, so she pared it down to a more manageable number, who like herself, found their way into the guiding profession at a time when it was totally dominated by males. Yes, Georgie White was already there and had been well established since 1956. But she was a maverick and considered by many to be something of a freak. In Georgie’s own words, ” I made no bones about it. I put the Canyon first: I put it before anything.” It would be impossible to write about female guides in the Canyon and not include her. Without her who knows how long it might have taken for others to have made the scene. 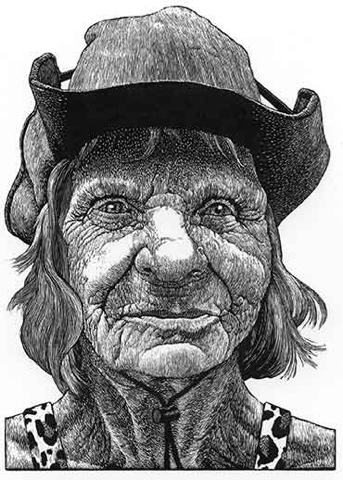 By the seventies there were women guiding on rivers throughout the country, many on rivers more technically demanding. But the Canyon is a big place, with big boats and big rapids. This was considered to be a man’s place. A few had come and gone in Georgie’s first twenty years, but it was not until the seventies that women made a stand and stayed.
There are the stories of eleven other women who made that stand and hung on against the odds. Though some of the stories overlap and intertwine, each person’s recollections are unique. Although the common thread that they share is one of gender equality, it’s about inequality and striving to be unique in any area, not just on the river, but in any arena where the status quo deserves to be challenged. There are memories of harrowing whitewater adventures and challenging rapids that can make male and female both gasp and shudder with awe and inspiration.
The beauty and grandeur of the place comes through, making it easy to understand the sacrifices that must be made in order to be a part of it. In our community of river enthusiasts there are only but a small handful of people that have managed to straddle the equator to make the sport a year-round venture. Our off river lives are sometimes in concert, sometimes in conflict with our desires. This aspect is also contained in the pages and helps to convey a complete picture of the character of these people.
Also contained in the book is a chapter on the flood of 1983, something not likely to happen again in our lifetimes and many of these folks were there to experience it. In addition the closing chapter of the book tackles the issue of sexism in the Canyon. This issue should never again come to pass. Awareness is the first step toward dealing with a problem and in many respects sexism still exists. It is also important to confront not just sexism, but any form of discrimination or prejudice, wherever it exists or whatever form it might take. This book is a wonderful step towards awareness, and translates to many parts of our lives and the lives of those around us.
EXCERPTS FROM THE BOOK
Louise Teal 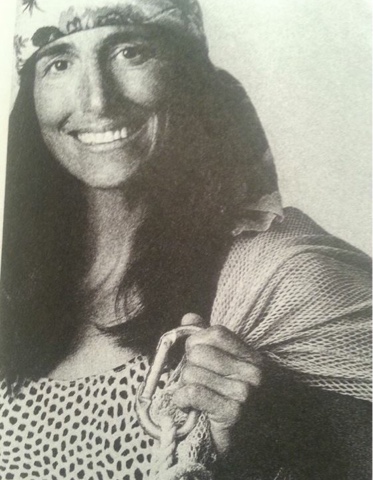 “That’s when I woke up, peered out from beneath my tarp, and realized I was in the middle of the Colorado River heading for Lava Falls. I did what any girl who can’t whistle would do – I screamed. Was anyone awake at camp to hear me?
I wasn’t just careening downstream on one boat, but two twenty-two foot snouts tied together. I quickly squirmed out of my sleeping bag and grabbed my life jacket first, then my channel locks and knife. My rain tarp was tied to my oars and raft frame. I needed to dismantle my temporary shelter enough to get oars in the water and a seat to row on. I cut the bowlines, because they were still attached to uprooted tamarisk trees that were now functioning as sea anchors. I didn’t want anything keeping me in the current. I wanted to get to shore.
It was wild. Thunder, rain, lightning, and me, naked except for my life jacket, heading toward Lava. Whenever the lightning flashed, I could see enough of the canyon walls to how close I was getting to Lava. I had flipped boats there in the daylight; I didn’t figure my chances were good of getting through with two boats in the dark.” 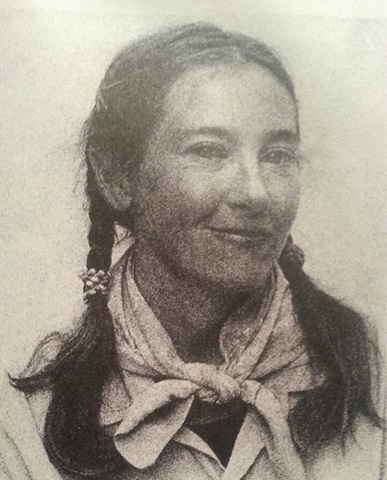 Ellen Tibbetts
Even when Ellen’s not there, her calm magic is still reassuring, according to another boatwoman, Ote Dale. “I know that she stands at the top of rapids and that she studies where she’s going to go. She’ll study where everybody else is going to go too, but she does her own run. She really goes to school. I don’t know if Ellie calms herself, but she calms me. I gain strength from visualizing her.”
Ellen like a lot of other boatwomen, learned that she could without being six foot tall and muscle-bound. She learned to maximize technique – to look way ahead, to use efficient angles, to have proper timing and to always be observing the water. “Ellen is always precise and subtle,” said one dory boatman. “I remember watching her run House Rock. To make the cut right, I would normally get out in the middle and start cranking on my oars. She’d just float down in, take a few precise strokes and end up in the same place. She changed the way I row.” 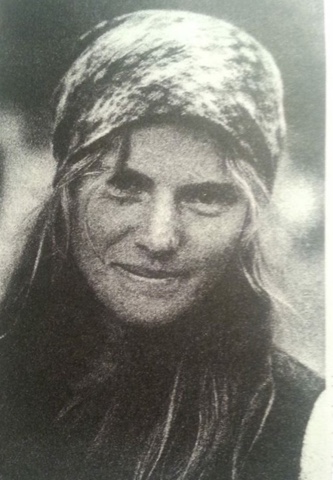 Suzanne Jordan
The water was still high, about 60,000 cfs or so, when both she and Martha Clark, another boatwoman flipped in 24-1/2.
David Edwards, a strong six-foot-plus boatman, described entering the rapid on that trip. “The waves were breaking every which way cattywampus. I hollered at my people to high-side [to throw their weight to the downstream tube in waves to prevent a flip]. I got knocked all over, but I made it through. I shouted to the passengers behind me to look back at the boats coming behind us. ‘Suzanne’s over!’ he shouted. I told him to look for Martha’s boat. ‘She’s over too!’ he said.
When David saw Suzanne again, it was below the next rapid, 25 Mile. It looked like she had jumped on someone’s upright boat, tied the two flipped rafts to it and was rowing all three boats to shore. David said, “I had a hard time rowing one boat to shore at 62,000 [cfs], and here she was pulling two upside down boats to shore.” 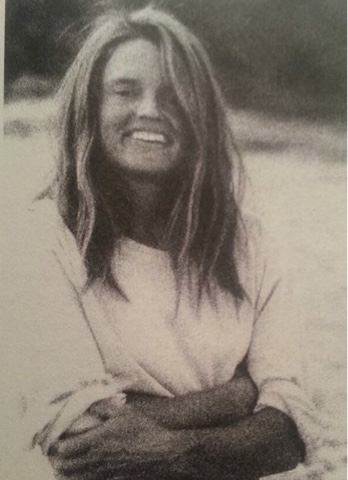 Lorna Corson
“So there I was rowing backward over the pour-over, both oars flying up and out. I was airborne trying not to let them go. The propane bottle under the load kicked on, hissing. My first impulse after assessing my oarless situation was, wouldn’t it be just sensational to light a match as I dive into Crystal, a flaming raft right down the center of the rapid? But instead, I managed to get one oar in as I entered the second hole, got the second oar back in time for the island hole and pulled the two-thousand-pound pig into the Alive Below Crystal eddy. Covered with oarlock grease and lucky again! I popped a beer and I remembered why we do this. Three weeks till I’m back at the top again!” 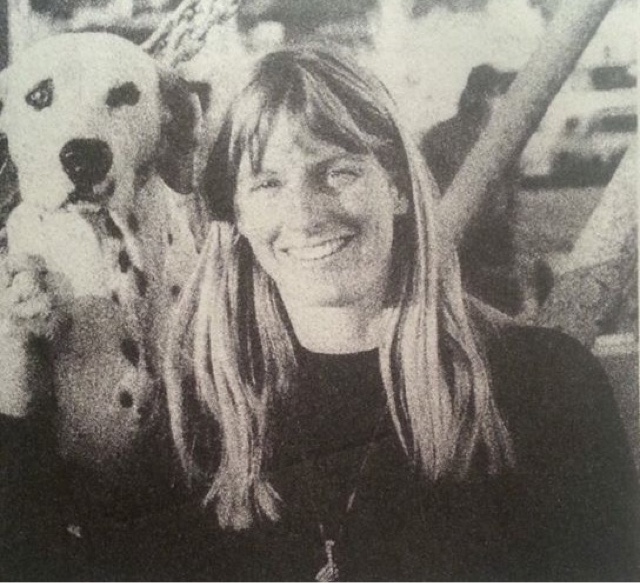 Connie Tibbitts
“I really worked hard for them, and they stood up for me at the end. By the end of the summer, Fred needed a fifth boatman. The boatmen said, ‘Fred, you’ve got a fifth boatman.’ ” As Connie said it was history from there. As to what date in history, she, like most of the boatwomen, isn’t really quite sure. “I have a T-shirt that came out of that era that says winter 76-77, so I bet I swamped in 1976 and was running in 1977.”
Connie didn’t sit around wondering what to do during the off-season. Every winter she took her money and went to a drop zone somewhere to sky-dive and but ratings: commercial pilot, multi engine, and instrument. She worked on planes too to earn her mechanic’s licence. During the river season, there were a couple of years where she did most of the maintenance on the motors. “I’m a natural wrench. I get along fine with machinery. Don’t get me wrong – it’s not a love for mechanics; it’s just something I can do. It’s not really that fun working with my arm up to my elbow in a bucket of oil.”
When I met Connie at her house high in the cliffs near Marble Canyon, she was working on one of her four vehicles.
Chapter 16
“My way was smoothed by the women who’d gone before,” said dory guide Elena Kirschner. Certainly, many of the women “who came before” had there way smoothed by men – a few outfitters and crews as well as fathers, brothers, and mates.  But for some women guides or want-to-be guides, it has not been easy trying to break into this predominantly male profession. These women had to balance their passion for working in the Canyon against their frustration in facing prejudice. Quite a few boatwomen said it was the first time in their lives that they had encountered sexism. Those who worked with an open-minded crew or mate had a relatively easy time of it, but not all the outfitters and crews were the same. Because of these company differences, the hiring and accepting of women as Grand Canyon river guides has continued to evolve. 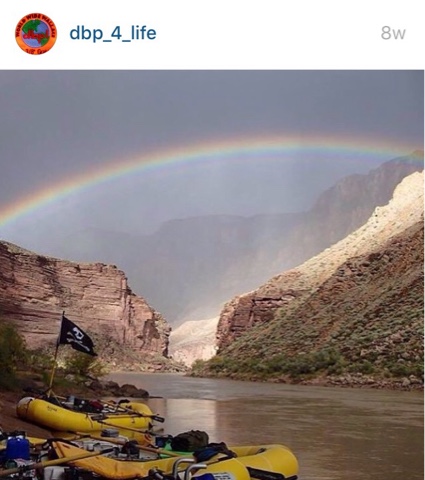