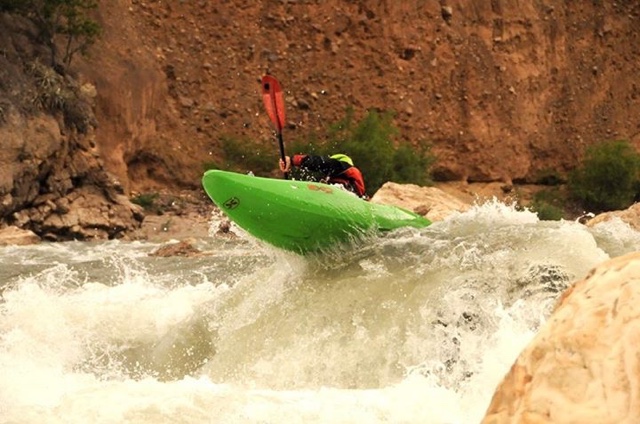 And the class fives weren’t the biggest worry of all… 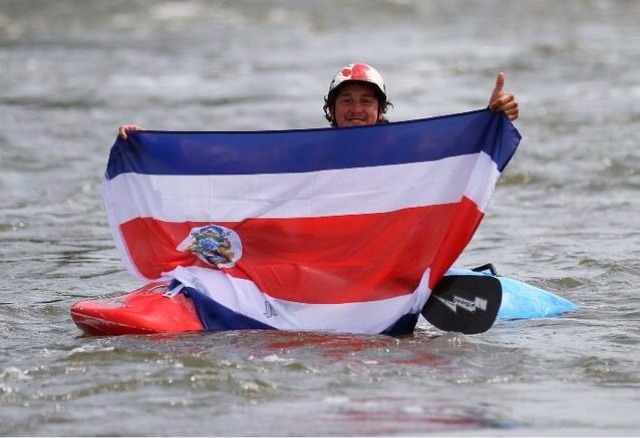 Andrey Coto Robles, 27 years old
Home River: Sarapiqui, Costa Rica
Favorite volume river: Baker, South Patagonia, Chile
Favorite Creek: Verzasca, Ticino, Italy
Favorite Multiday expedition: Marañon, Peru
Favorite place to explore with first descents: Brazil
Favorite place for freestyle: Costa Rica
Andrey Coto Robles started paddling at age 14, and as most of us do, he caught the bug. He has been kayaking ever since and traveling the world doing so. He’s paddled in some epic “dream” places, seriously (DBP) magazine worthy. With places like Mexico, Brazil, Peru, Chile, Argentina, Switzerland, Italy, Austria and France notched on the ol’ paddle, it doesn’t appear that he will be slowing down his quest for the next best rapid anytime soon. 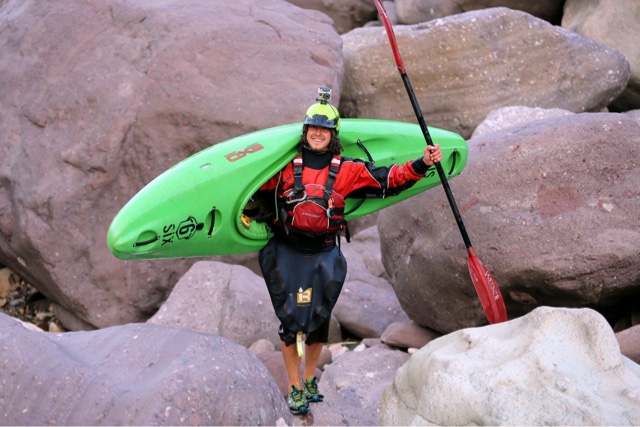 He has competed in competitions around the world: Adidas Sickline; the ICF Canoe Freestyle Championships in Platting, Germany; Futaleufu Down River and Extreme Slalom in Casa de Piedra, Chile; Palguin Creek Race; Cubatao Festival Extreme Sprint, Brazil; Espolon River Festival Slalom, Chile; and Teva Straight Down in Switzerland. He’s navigated big water on some of the world’s most famous rivers, including the envied Apurimac, Itajai, and Futaleufu. Last July, Andrey put one more in the bag and descended the Marañon River of the Peruvian Amazon.
Río Marañon is the “mainstem” source of the Amazon, meeting no stronger rival at any junction on its route to the Atlantic. It’s therefore considered the Upper Amazon and the only stream meriting this title. From its birthplaces at glaciers on the highest tropical mountains in the world [Yerupajá and Huascarán; 21000-22000 ft], the Marañon courses north through the central Andes, covering about 1/3 the length of Peru. As it does so, it’s squeezed into the bottom of an arid canyon up to 10,000 ft deep on both sides – more than double the depth of Arizona’s Grand Canyon.
Sections of the Marañon have commercial raft trips and a past client of Sierra Rios, a local outfitter stated, “The Marañón resembles the Grand Canyon of The Colorado in many ways with its rapids, beaches, side canyons and deep cacti-studded gorges. Both rivers offer numerous side-hikes and waterfalls. Like the Canyon, the Marañon is ideal for a long multi-day boat trip where a person can forget the grind of everyday life… However, the Marañon offers much more. Unlike the Grand Canyon, the Marañon is free flowing and its character can change overnight by the whims of nature. It’s navigable section is much longer than that of the Colorado and its canyon is deeper. Some beaches are big enough to accommodate small villages. The Marañon offers more and greater variety of rapids that are overall more challenging to navigate. It’s continuously strong current makes it possible to easily cover 30-40 miles per day in a raft, assuming one does not stop for side-hikes. The jungle area of the lower Marañon has no equivalent on the Colorado…” (Sierra Rios)
The Marañon as it exists now offers paddlers the feeling that many boaters must have experienced on the Colorado – before it became controlled and destroyed by Glen Canyon and the Hoover Dam, that is. It also offers Peruvians, including several indigenous tribes living along its banks, a dependable means for survival. Unfortunately they are in danger of losing their way of life forever because the river is facing what all us river rats fear…DAMS. Andrey had been dying (no pun intended) to tackle this beast in all its glory. A dream/goal of his is to raise awareness of the hydroelectric threat, bringing protection to the river and it’s people. 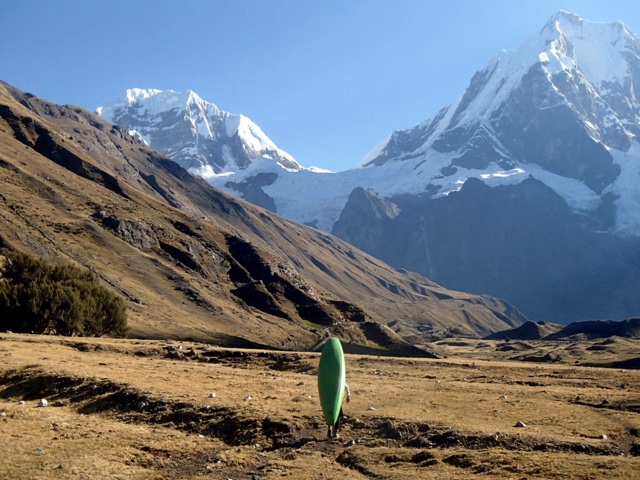 Andrey set out on July 30th, 2015 for his 42 day expedition. Luckily, we had the chance to catch up beforehand to get the “Prestory” on his trip.
Tash: How have you prepared for the trip?
Andrey: Before starting the expedition, I went on two short expeditions – one of two weeks and another of six days on the Maranon River, where I learned many things. I prepared with camping equipment, rescue equipment, first aid kit, stove, water, filter and food. I’m sure this will be the best multiday trip of my 13 years of paddling. I’m excited to see a river start and follow it to amazing places only accessible by whitewater.
Tash: You will hit all types of weather on this adventure, from snowy glaciers to the hot Amazon Rainforest. What are some of your gear choices?
Andrey: For the cold I have several layers of lightweight materials to maintain my body temperature, a rain jacket and also socks, a sweater and a hat made of wool, which is the traditional clothing worn by Peruvians for the cold. For the heat I have light and breathable layers. I’m more accustomed to hot than cold so not a real issue there. 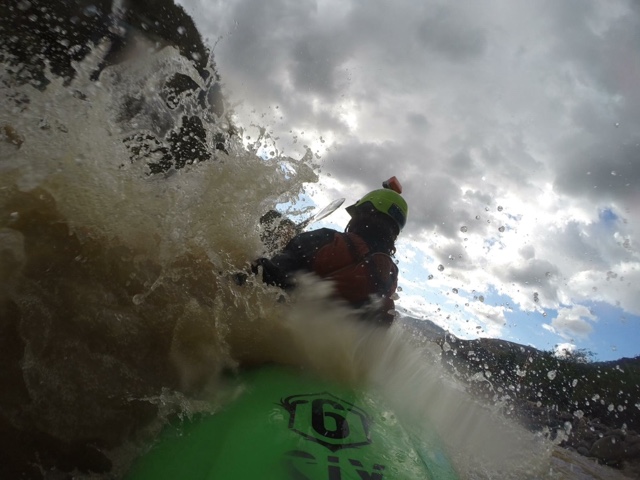 Tash: What are the names of the cities you are visiting?
Andrey: We will pass Huaraz, Laricocha, Banos, Queropalca, Copuma, Siuas, Chagual, Celendin, Corral Quemado Rentema, Puerto Imaza, Niebla, Iquitos.
Tash: Will you be completely disconnected throughout the trip or will you have some access to the outside world?
Andrey: The expedition is divided into six sections. About 2 times per section we will have the opportunity to get out of the river to refuel on food and connect with the world.
The first part of the trip, we will paddle about 50km of great whitewater with a few waterfalls and amazing views. Then we will stop in a town for resupply and hit the natural hot springs.
Day 1 – 10: Origen headwaters
Day 11 – 23: Upper GC + Inner Gorge
Day 24 – 35: Central GC + Lower GC
Day 36 – 45: Jungle Pongos 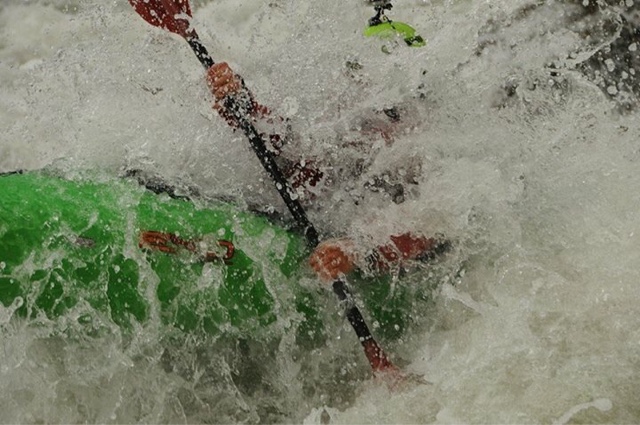 After he returned on September 9th, we caught up with Andrey again to get the 411 on how the trip went down.
Tash: Were there any difficult moments throughout the trip?
Andrey: Well the obvious, the temperature of the glacial water combined with the altitude made it difficult to paddle for sure. It was difficult to breathe and keep energy levels up. Then switching to the heat of the Amazon and facing a lot of flat water was also not easy.
There is a big portage in the Inner Gorge. Normally we would spend one full day just to pass this rapid. It’s possible to run by kayak but it’s a strong class five, long rapid. In this section we had raft support to carry the food and camping gear.
We ultimately decided to run the first part of the rapid with the boats, but one flipped and we lost almost all the food and a lot of equipment.
Fortunately, we were able to rescue both the boat and the guide, but we had lost so much time and energy and it was almost dark so we had to spend the night there. It was a hard night, but luckily three days later we got resupply.
Andrey on the Maranon﻿
Tash: Did you interact with any indigenous communities?
Andrey: Yes, almost along the entire river there are indigenous communities – some in the cold weather and some in the hot, but one of the most memorable was the Awajún people who live in the tropical rainforest of the Amazon.
The Awajún community doesn’t have contact with the outside world.  They get everything they need from the jungle – food, medicine and water. They speak the Awajún language and live in the last section of whitewater of the Los Pongos River. It was very difficult to do this section; they don’t let anyone pass by the river because they don’t like white people. In the past many terrible things were done to them.
Before the trip we had many conversations with the leaders of the community to explain to them what we were doing. In the end of the discussion, some had agreed to let us, and others not. So we got a translator and took the risk. A few years ago they killed a group of Germans because they were there without permission on their land. 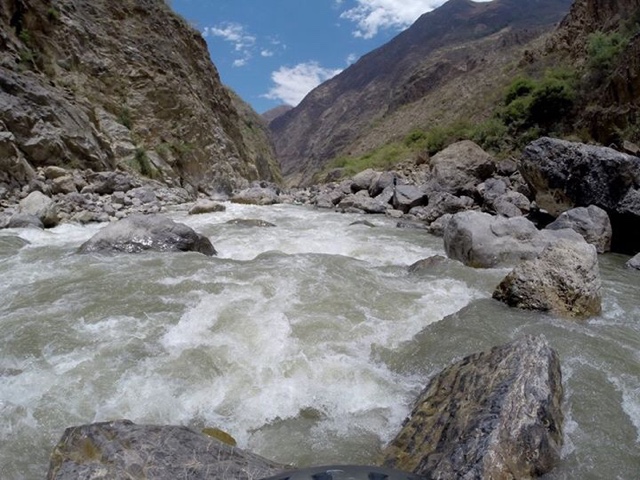 It was scary! Not just because we were running class five big volume rapids in the middle of the jungle, but also because we were not welcome there. We had to decide what to do – go or not go? If we didn’t go we would have to miss this beautiful section with big rapids like the Zambezi River, and this magical scenery – very green, full of waterfalls and animals.
One thought was they could kill us and nobody would know what happened to us. There’s no police there and no way to get by car, the only path is the big whitewater. When it came down to it, more than half of the group decided to get a motor boat and go back and just three of us made the choice to go and not look back, no matter what fate we faced. It was the hardest decision of my life.
We stopped in some small villages before to explain our mission and in some they were happy to have us, but in others they were throwing rocks and waving machetes and guns, screaming at us. We didn’t understand what they were saying, but it was obvious they didn’t want to be friends. We stopped to talk to them because we were scared they would shoot us if we didn’t. The community greeted us with hostility, but the translator took care of the situation and they calmed down and welcomed us to their land.
Later one person came to us to say we’d better leave because at night they would kill us, so when it was almost dark we got to the boats as fast as we could. We had to float the river at night to find a safe place to stay. Fortunately this part was just flat water.
Most of the Awajún community was very kind to us. They took us fishing and gave us special food. A few were skeptical and wanted to protect their land. I am happy about that because they respect their land and fight for it. If they were not like this the place would be different.
Tash: In contrast, were there any funny moments?
Andrey: In the last sections of the trip we received assistance from motorboats. One day we were in the camp and decided to go upriver to watch the sunset. We left the boat to walk to another beach. Everybody was watching the sunset – including the driver of the motorboat. After a moment we saw the boat floating downriver with nobody in it. The driver started running along the beach to save the boat. He jumped in the river and it was very funny. Just one second more and we would have lost the boat! 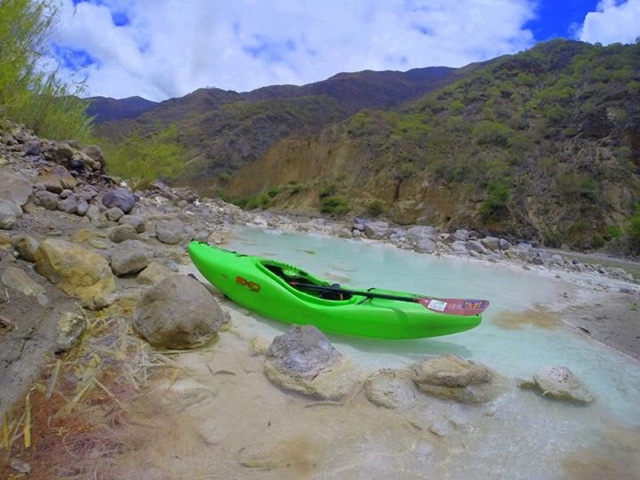 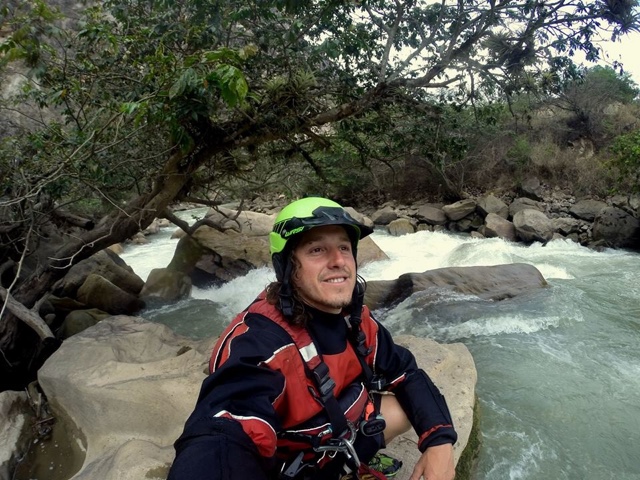 Hi guys,
Thank you so much for this wonderful article! Here we all can learn a lot of useful things and this is not only my opinion! Even BLNCK corp. and http://www.wham360.com confirmed it!